This is the story of a rather unknown Alpine with a new architecture: the A105 project, resulting from the major NGA (New Alpine Range) programme, was to give birth to a berlinette with a design based on extreme compactness, an arched volume and incredible interior features. While he is a stylist within the very small team of Renault designers under the responsibility of Gaston Juchet (see our posts dedicated to this great designer: http://lignesauto.fr/?p=5718 http://lignesauto.fr/?p=5768 http://lignesauto.fr/?p=5796) Robert Broyer faces all the new programs as many revolutions to try. 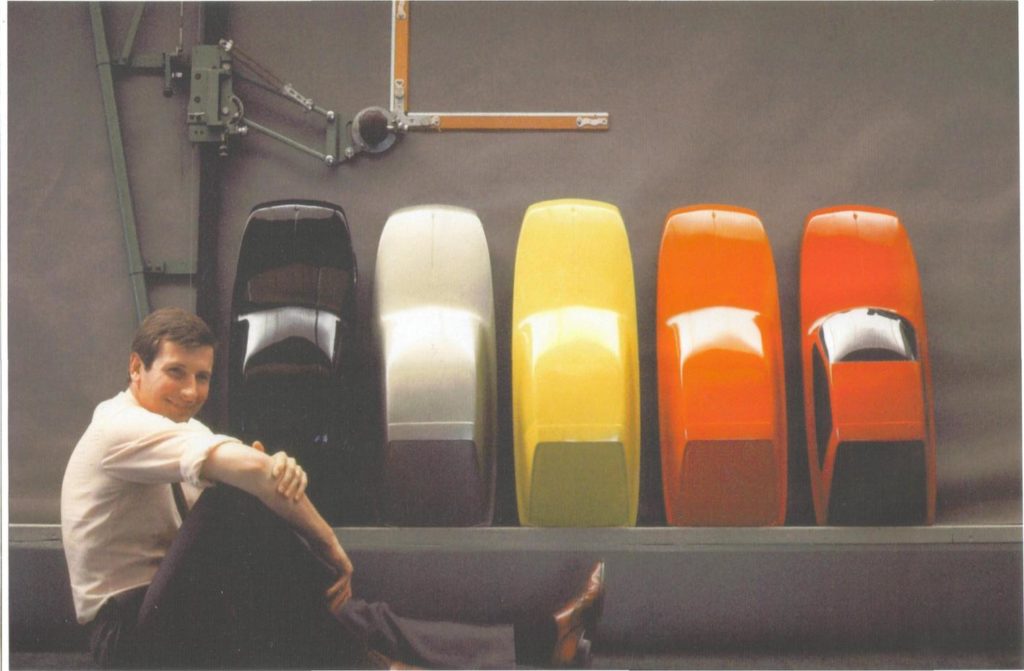 At the end of the 1960s, Robert Broyer posed alongside his “le sabot” sculptures, which inspired the style of the Renault 12 he had designed himself.

For the 1969 Renault 12, it starts with a model called “le sabot”, because its wedge-shaped profile, plunging, with its unevenness at the back of the roof, makes a lasting impression. On this project, Broyer is trying to adopt an asymmetrical grille with only one headlight on the driver’s side and two on the passenger side (below). The Renault 12 inherits the bold styling concept but retains a classic grille and a rigid rear axle chassis. 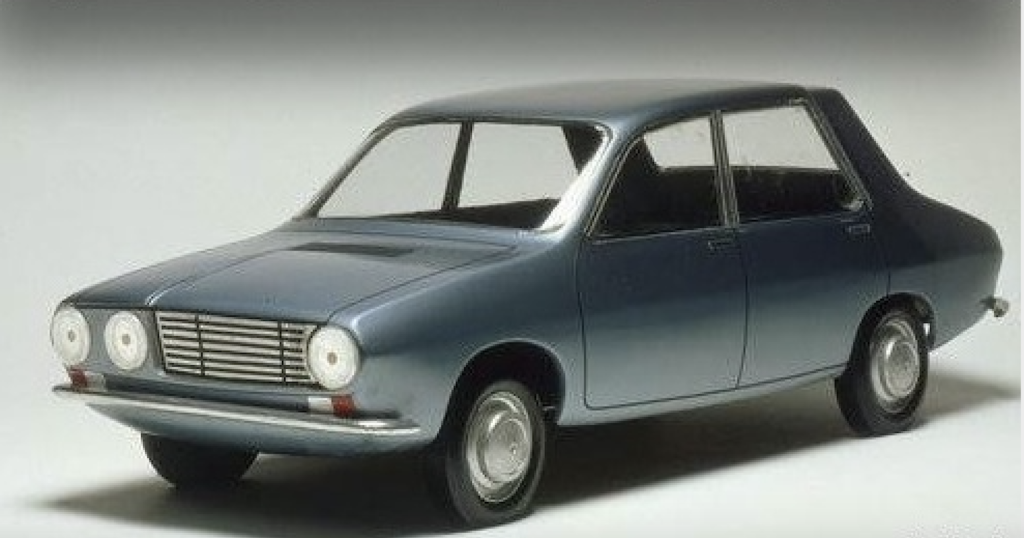 Later, when his colleague Michel Boué drew the R5 with a stroke of genius, he joined the program for the interior and drew a simplistic dashboard since it… did not exist, simply represented by a padding of the windshield bay awning. Ingenious. 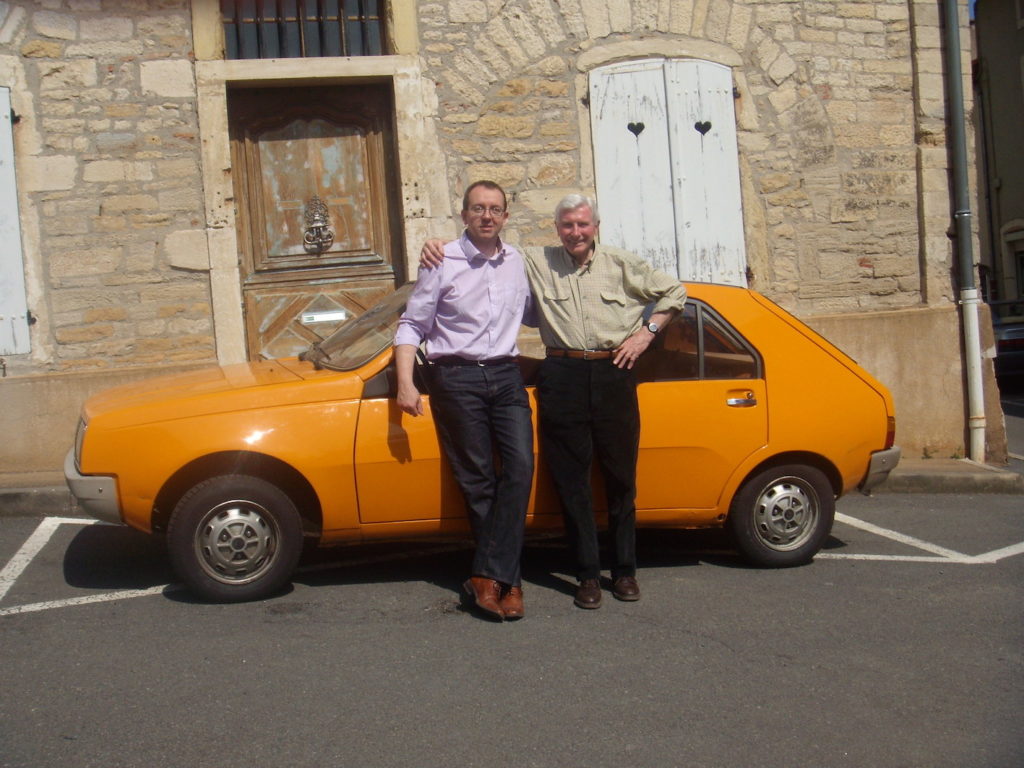 The manager of the LIGNES/auto site on the left, next to Robert Broyer, a few years later (!!), in front of one of his products, the Renault 14 designed in 1971 and marketed in 1976.

Finally, just before leaving the Régie to set up his own design office, he designed the Renault 14 (above), a daring and modern compact sedan, very comfortable and the first Renault to feature a transverse engine. In fact, the mechanical components come from the Peugeot 104 following the agreement that Renault and Peugeot had signed at the time. 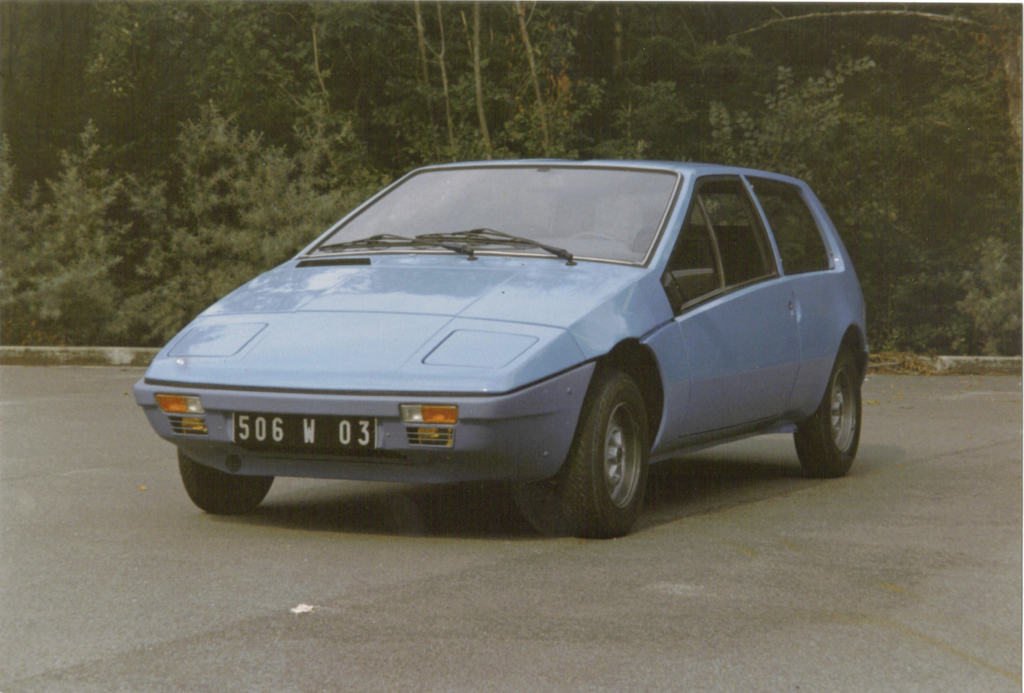 Shortly after founding his own design studio, Robert Broyer worked for Audi, but very quickly the Renault style management in the hands of Gaston Juchet called on his subcontractors. First of all, a Renault 14 coupé project was launched (above) capable of attracting new customers and, above all, of running Guy Ligier’s plant following the shutdown of the Citroën SM. Robert Broyer studied all areas: exterior style, inter style and even industrialization. The case goes very far, but the launch of the R15/R17 coupe in 1971 and the arrival of the Matra Simca Bagheera in 1973 caused the project to fail. Neither the internal models nor Jean-Luc Lagardère should be hindered! 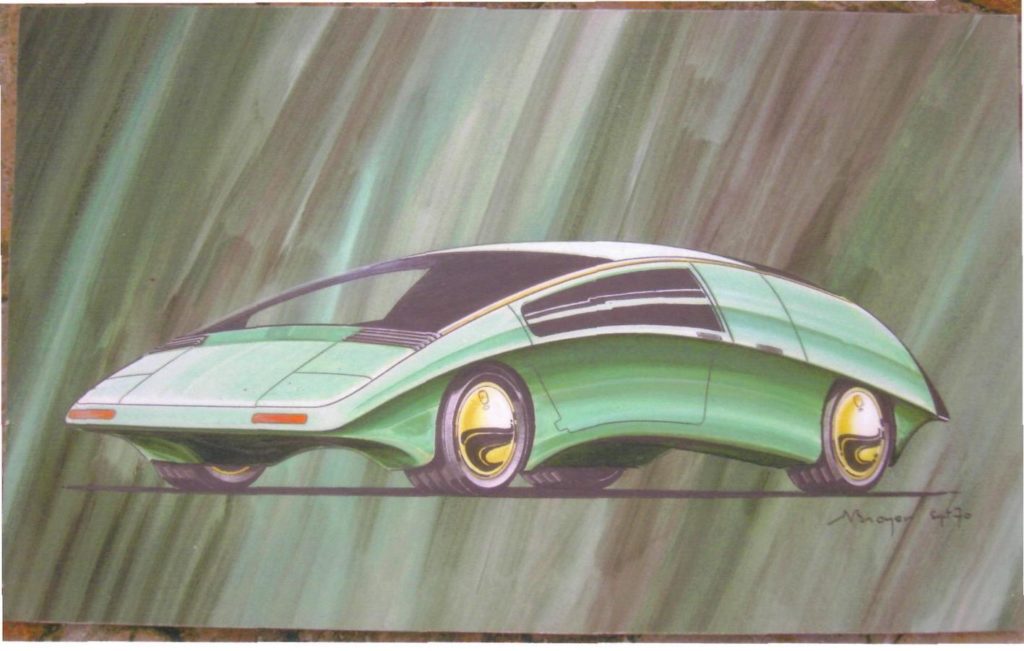 That doesn’t matter. Renault contacted Robert Broyer again to work on the NGA programme: the New Alpine Range. Broyer is consulted on the project of a berlinette called the A105 project. This is a good thing, since when he was working in the Renault style, he had sketched out a project for an “arched” sports coupé in 1970. Four years later, Robert Broyer resumes his project at Renault’s request… 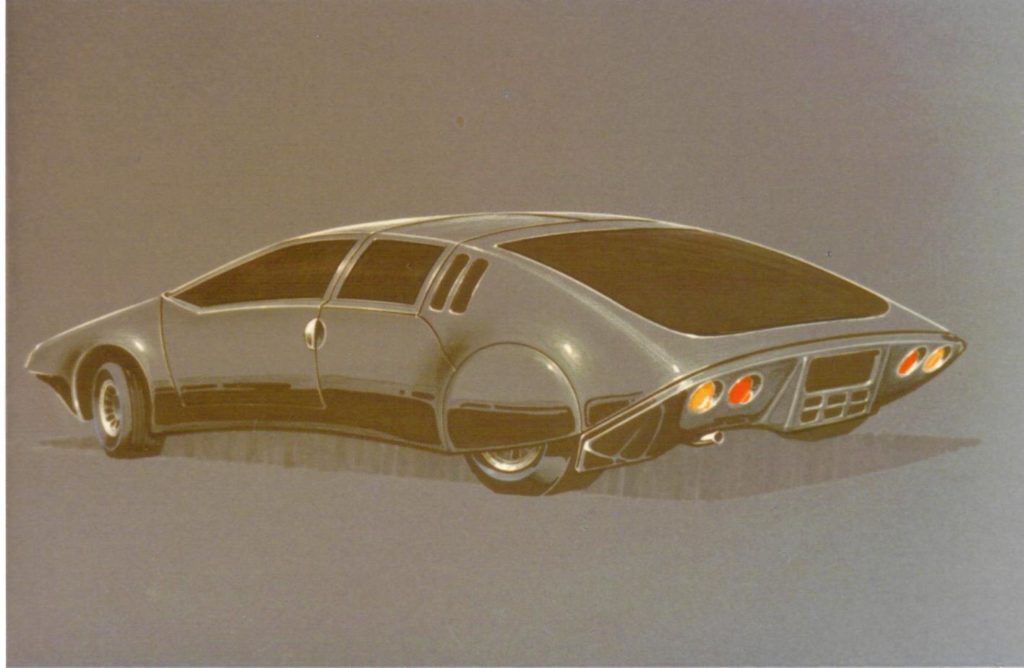 This study has long remained secret.  It therefore landed in 1974 in Robert Broyer’s independent design office. This designer is being consulted by Renault to handle the A105 sedan project, which is more compact than the A310, with only 3.73 m in length (compared to nearly 4.20 m for the A310) and a four-cylinder engine in the rear transverse position.

Robert Broyer will fight to ensure that this transversal rear architecture is retained. This favours the presence of a large car trunk of more than 350 dm3 and this half-drop water profile would favour aerodynamics, which cannot be confirmed since the model has not been tested in the wind tunnel. 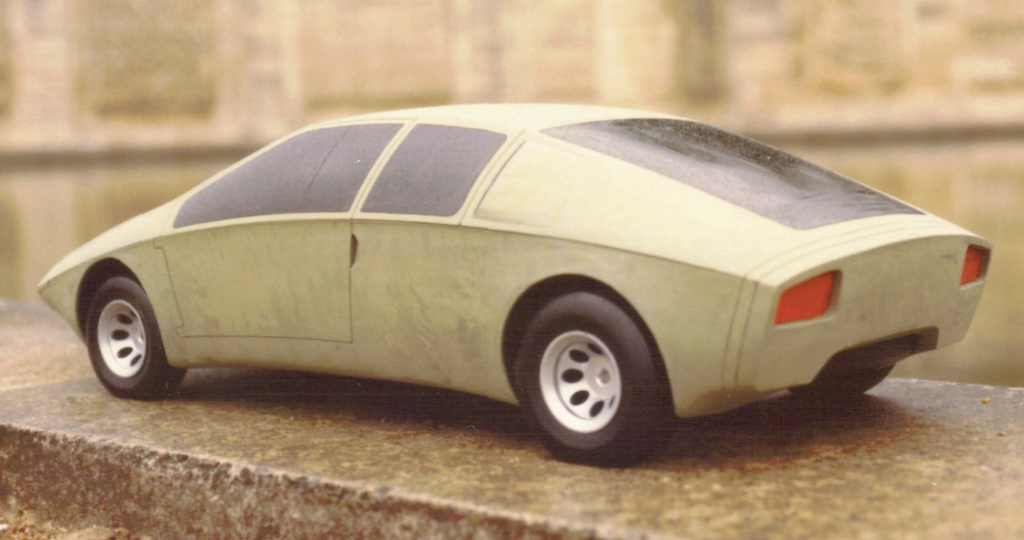 To accommodate his passengers, Robert Broyer invented a revolutionary design: the “arched” style. This small berlinette measures 3.73 m and is only 1.17 m high. The 2.34 m long wheelbase allows for a bold technical architecture with the engine in the transverse rear position. It should be noted that to save even more space, the spare wheel is placed vertically behind the engine. 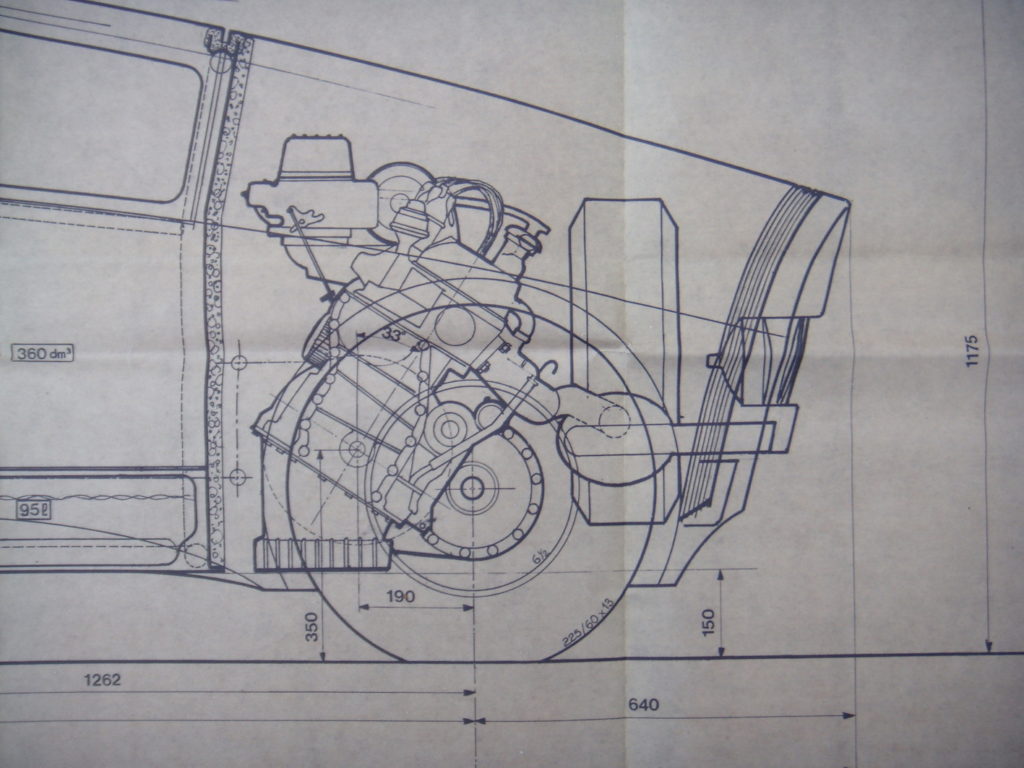 The relative compactness of this A105 project imposes a new style, the famous “arched” style that constitutes the originality of the coupé. Robert Broyer had imagined it in the early 1970s as seen in the two drawings above, but in 1974, when the A105 project took shape, this concept had to be adapted to the reality of driving. This “arched” style reduces the front overhang to only 74 small centimetres, but in 1974, it didn’t shock anyone! 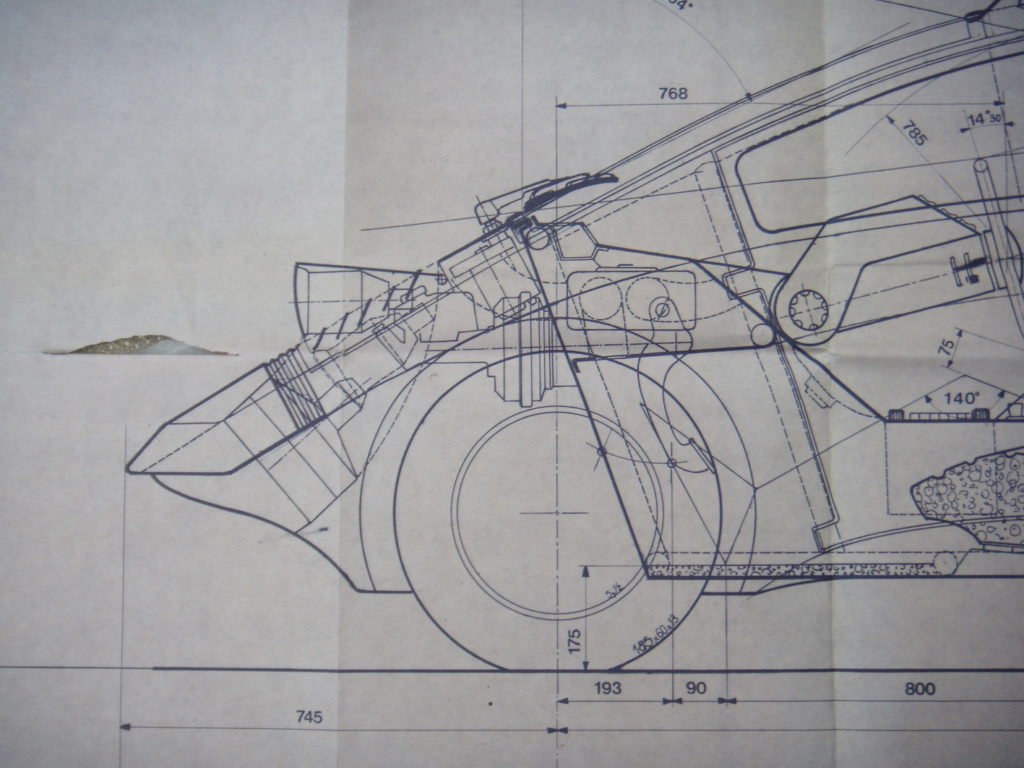 It is above all at the level of retrovision that the concept breaks with habit: the Alpine A105 does not have an interior mirror but equips itself with a periscope which allows, thanks to an opening in the small pavilion, to see like in a classic mirror ! It can be seen from the technical drawing below that Robert Broyer designed this piece according to the rules of the art and that it is fully operational. In theory! 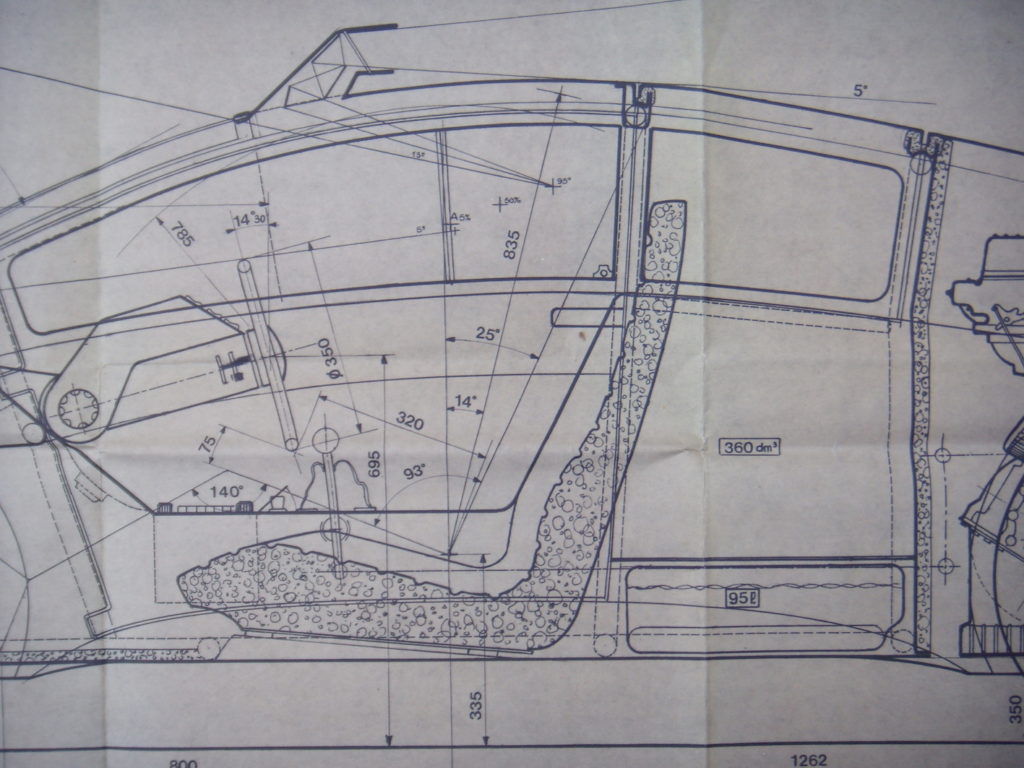 The trunk extends over the entire width of the coupé and overlooks a 95-litre tank, an exceptional capacity. In short, the A105 carries two passengers but can carry the luggage of four people! This trunk is accessed through two doors cut into the sides of the bodywork. Robert Broyer is a designer who also thinks about the daily use of his projects, even if it is a sports coupé !

The pilot sits only 33 cm off the ground, the tyre is 13 inches high, which makes you smile today, with 185x60s at the front and more generous 225x60s at the rear. Unfortunately, the Alpine A105 will not exceed the model’s heading. Because in 1976, the French manufacturer had great sporting ambitions that would no longer involve Alpine on the roads and circuits, but Renault. 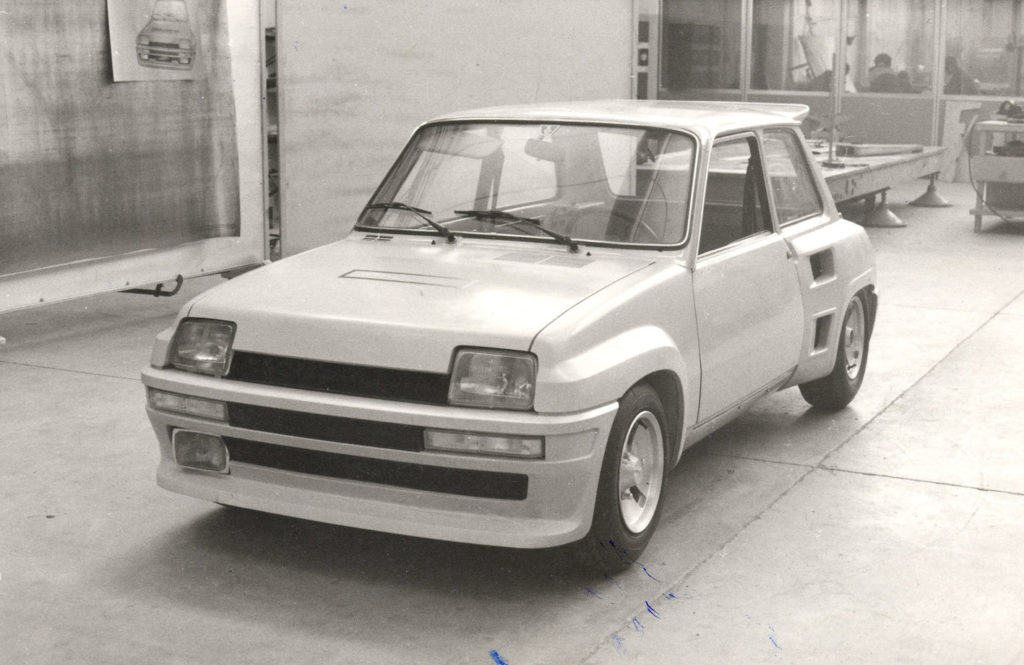 The model of the future Renault 5 Turbo with central engine (above) is launched with a drawing by Marc Deschamps and a final realization at Bertone. It definitively stifled the NGA programme and the A105 project. This model gave birth to the 1978 Paris Motor Show, the first version of this bodybuilt R5. In 1980, after Renault won its first F1 GP (1979) and the Le Mans 24 Hours (1978), the Renault 5 Turbo took over on the tracks and in rallies. 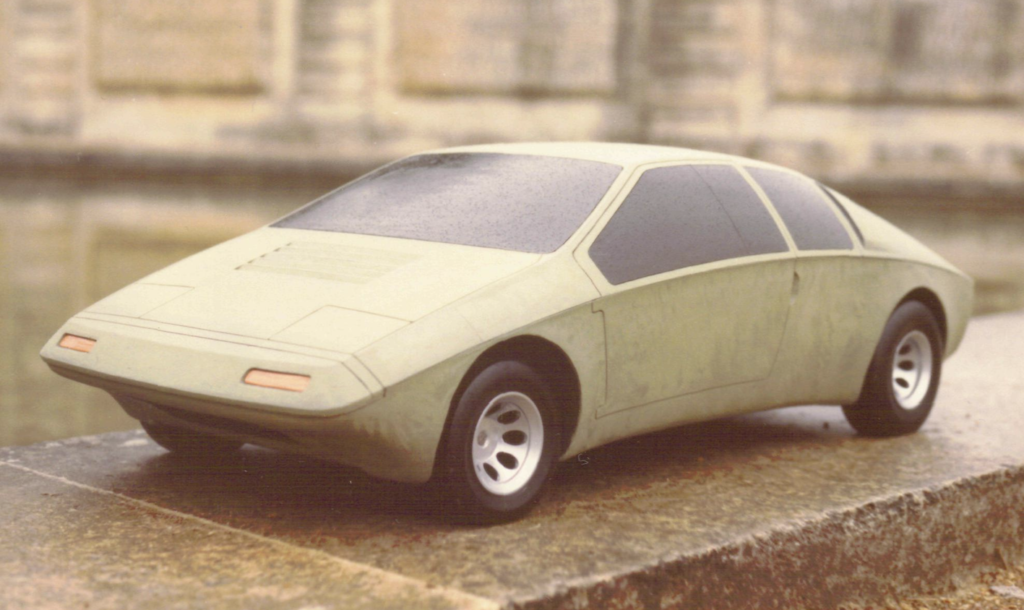 The Alpine road range will therefore only be able to rely on the A310 V6 version in 1976, the GTA in 1985 and the A610 in 1990. The latter signing the swan song of the brand with only 818 copies produced… The A105 (above) will unfortunately not have gone beyond the stage of the 1/10 scale model. This is very unfortunate, because its unprecedented architecture would have shaken up the world of sports coupes, which are generous in size but do not offer the same spectacular interior as the A105. 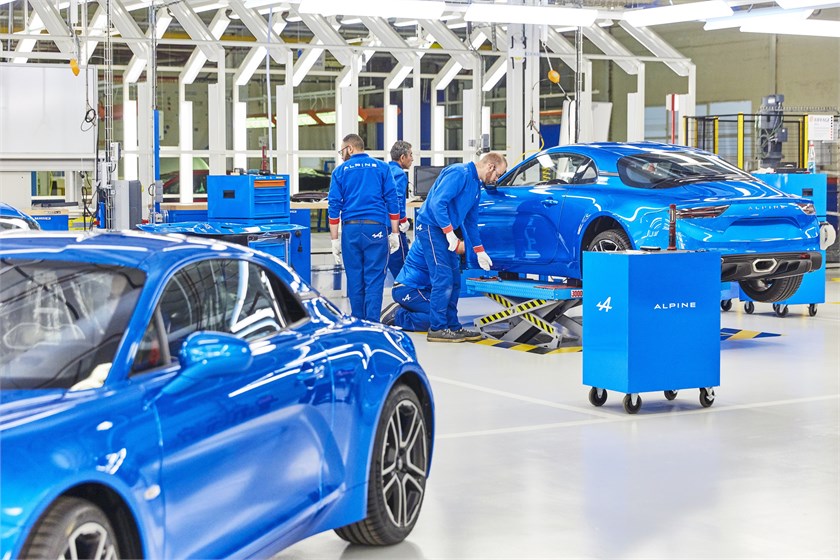 In 2012, however, the brand was relaunched by Carlos Ghosn and the first model (A110 above in the Dieppe factory) nicely reflects the aesthetic theme of the berlinette born in the early 1960s. Can we dream of a super-berlinette with the audacity of an A105 to complete the range ? No, sadly…

BONUS: The Alpine A105 with longitudinal engine !

Robert Broyer is a stylist who has always broken codes. The models that bear his signature prove it. Nevertheless, this designer carries his work far beyond the mere aesthetic research. He knows how to take into account all the subtleties of a specification and while he supported the A105 project to be based on the rear central engine architecture, which offers many advantages, he also studied a version of the A105 with a longitudinal engine. 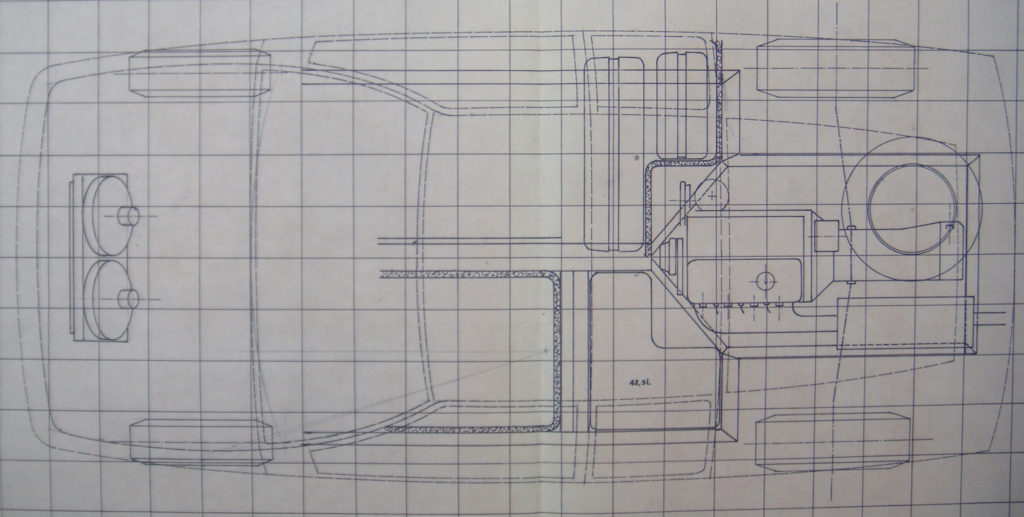 The two views of the plan of this more classic version reveal important differences with the one with a transverse engine. Its length evolves from 3.73 m to 3.93 m, dangerously approaching the A310. It is based on a 13 cm longer wheelbase, while its trunk only offers 140 litres of capacity. Finally, its tank is only 42 litres. Its only interest, in addition to the use of engines in longitudinal position (their Turbo versions would flourish at that time in the Renault range), was to offer 2+1 seats.

There is still an unanswered question today: what would have become of the Alpine brand if the A105 project had been launched in the second half of the 1970s ? It would have perfectly held its place between an aging A110 berlinette and a more classic A310. This new Alpine could have boosted the Dieppe plant and undoubtedly avoided the long Way of the Cross used by the successive evolutions from the A310 to the A610.