LIGNES/auto is also a Facebook page: https://www.facebook.com/lignesauto/?modal=admin_todo_tour
and a You Tube channel: https://www.youtube.com/channel/UCtd0i6ZUwsguWsDwwfiK3cA

Here are two unpublished documents :
– the GS three-box sedan designed by Henri Chapron and called “la berlinette”,
– the “coupé” of the same bodywork manufacturer, which is not without evoking the one that was once studied at Citroën !

Here is the 28th episode of the Citroën Centenary celebration, the full text of which can be found on this site, downloading an exceptional PDF in July.
For now, here are some documents from the LIGNES/auto attics:-) 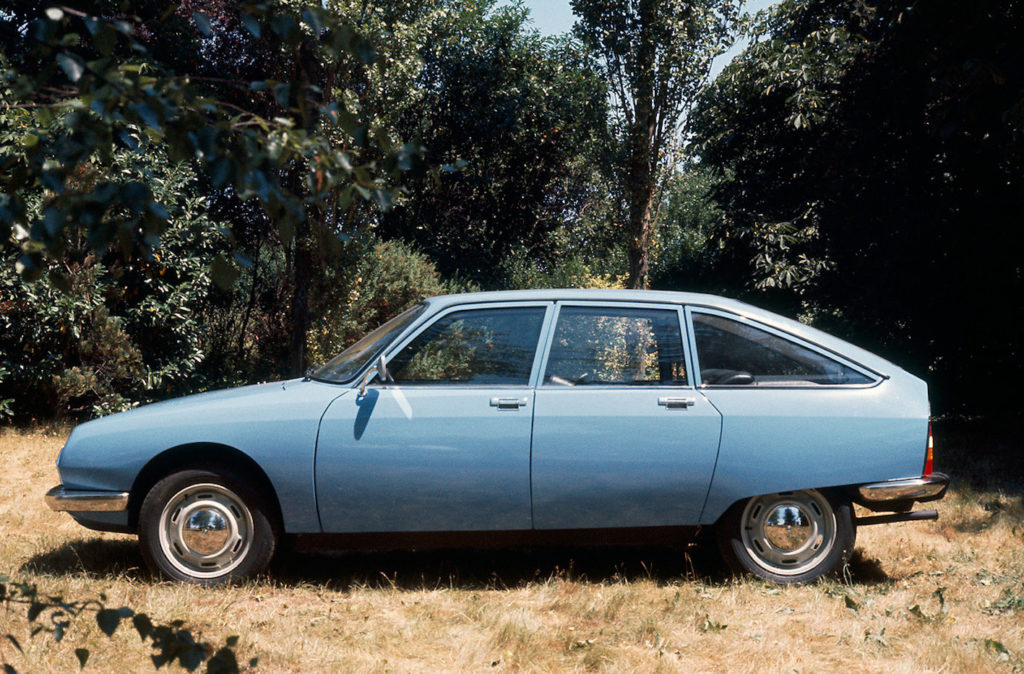 Before detailing the two documents from Henri Chapron, let’s go back to the “matrix” of these berlinette and two doors derivatives : the GS. It appeared in 1970 but was designed in the second half of 1967 after the famous “F” Project program was stopped when Budd, the American company, delivered the stamping tools to the Citroën plant in Rennes-la-Janais. The GS was therefore designed with a very short timing. It is by Robert Opron for the style theme and Jean Giret for the volume. Robert Opron does not hide the fact that he consulted Giorgetto Giugiaro at the time. Looking at the two sedans designed by Citroën and Giugiaro (GS and Alfasud), we can wonder when we detail the identical architecture of the two cars: style, flat-4, no tailgate, front wheel drive… 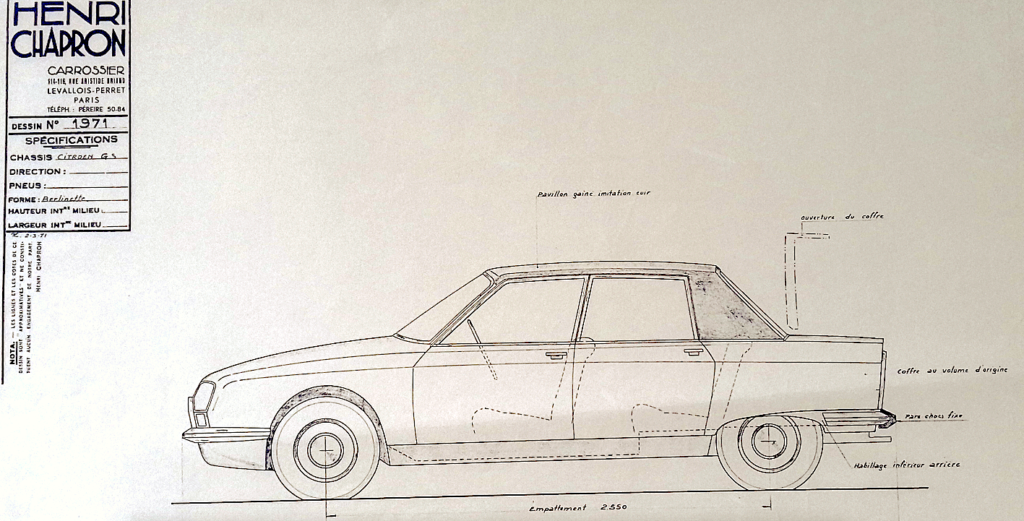 Here is the GS sedan proposed by bodybuilder Henri Chapron one year after the presentation of the GS sedan of the Javel manufacturer. The idea is to derive a more luxurious and specific bodywork on a Citroën basis. In this case, it is a three-box sedan that retains the entire body all the way to the rear doors. The roof is modified and, according to the legends annotated on the drawing, “imitation leather cladding”. 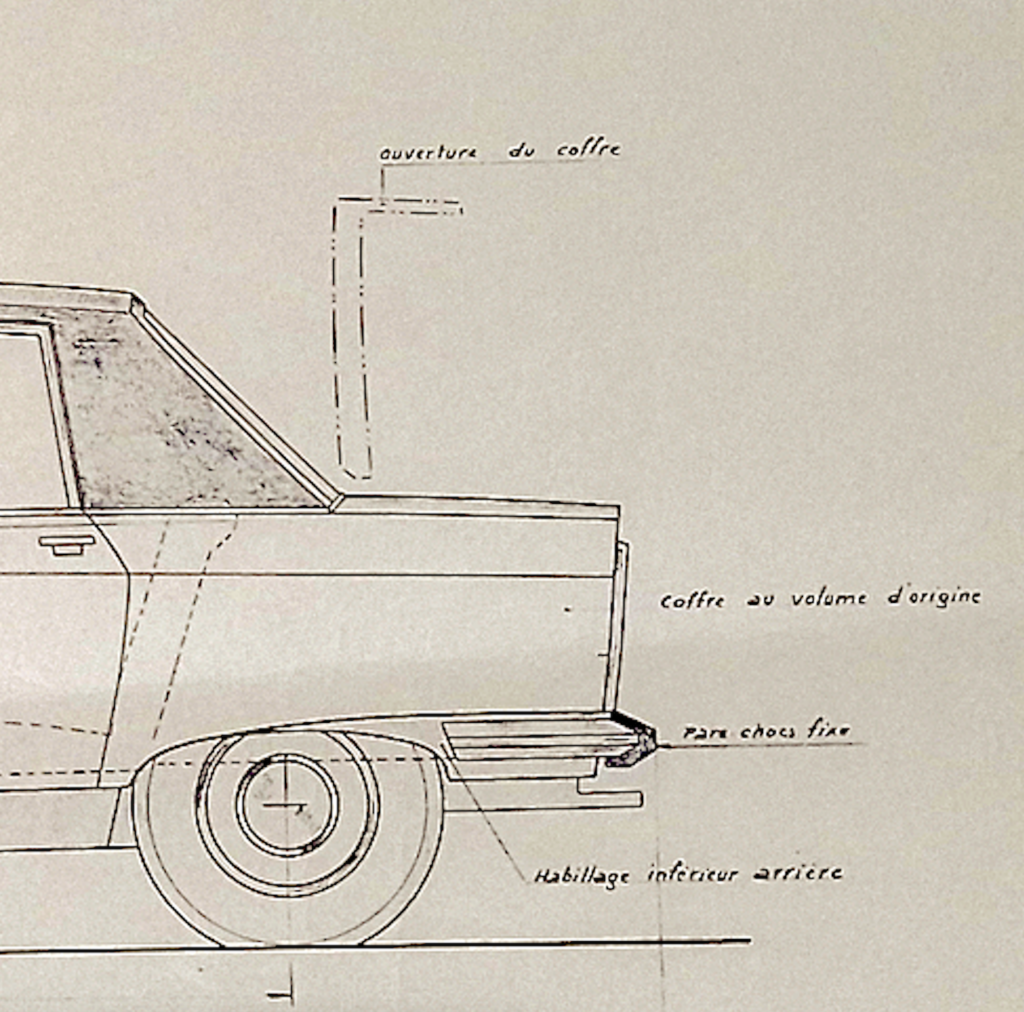 The entire stern is new with an almost horizontal trunk lid that opens to the…. vertical. It is conceivable that access to the trunk is much easier here than on the Citroën sedan ! It is specified that the volume is identical to that of the original GS, while Chapron plans to leave the rear bumper fixed and not to load it on the trunk flap as on the standard sedan. This GS Chapron has not gone beyond the stage of this drawing…. 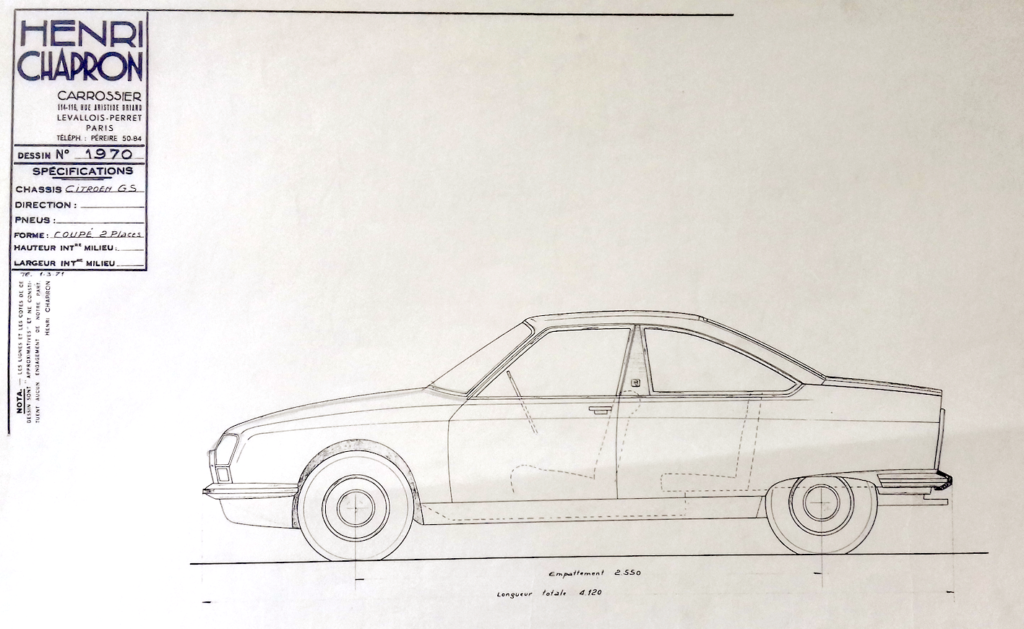 The Citroën GS has been the source of many studies of two-door coupe models. We suggest you to detail them here, starting with this new version, always designed by the bodybuilder Henri Chapron. This time, it is a much more significant transformation than that of the three-box sedan. This two-door silhouette maintains the same wheelbase and length as the sedan’s. For cost reasons, the front door is not extended. 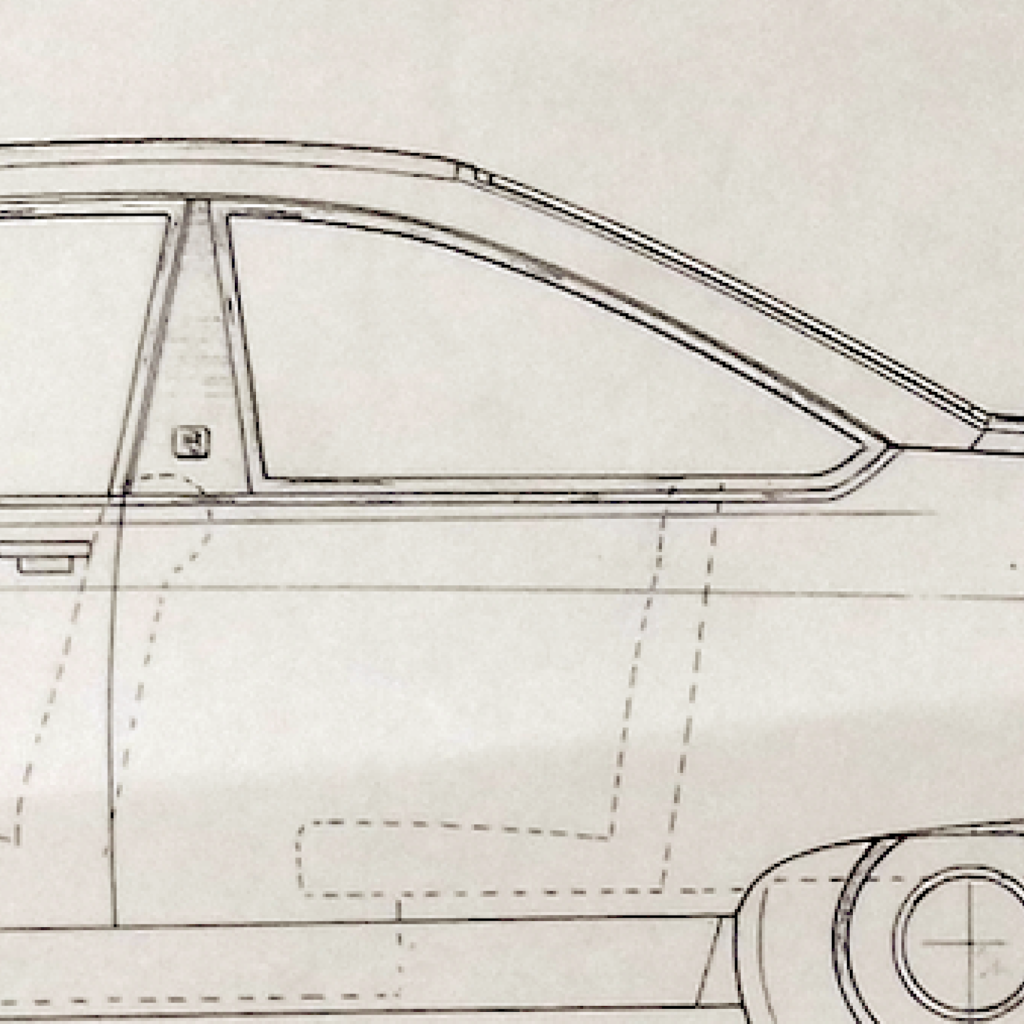 The rear part is transformed with a triangular central pillar (main difference with the solution drawn at Citroën below) while the rear window seems very similar in size and shape to the third side window of the sedan. The trunk lid is deeper than the one used to study the three-box sedan seen above. As for the latter, the project has not gone beyond the stage of this drawing…. 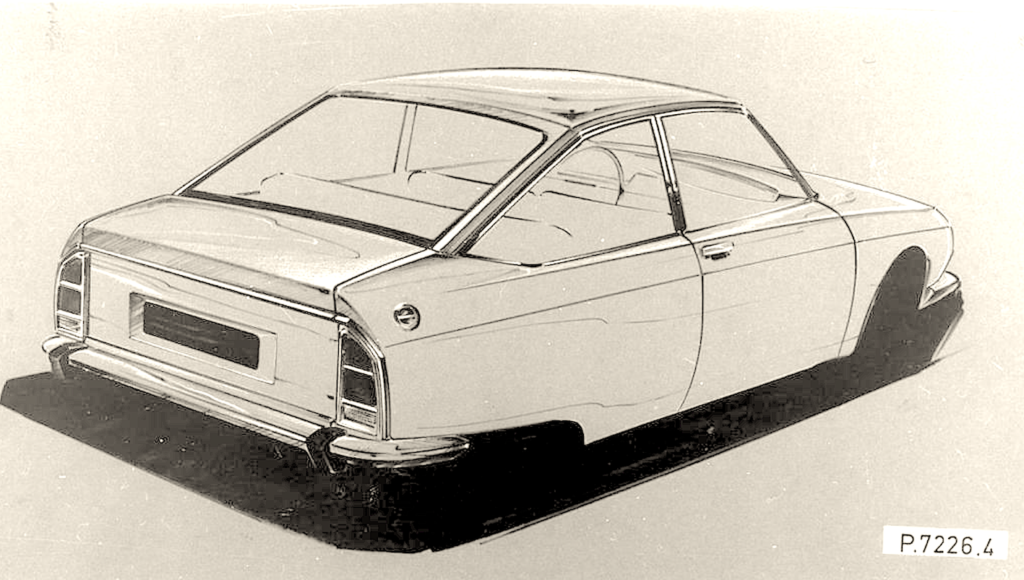 Many drawings of a two-door coupé based on the GS sedan were made by the Citroën design office. Here is the one that comes closest to the proposal of bodybuilder Henri Chapron – unless it is the other way around…. – with many modifications: body side, roof, rear window, trunk flap and of course side glazing. It seems here that the in-house stylists have extended the door while the generous glass surface of the side window augurs well for splendid visibility on board !

And then, as always, the design office does not just follow the beaten track, those trampled by the competition of the time. Michel Harmand imagined this small two-door coupé with three seats, including the pilot in the centre, in the early 1970s. Very geometric, its style is characterized by a hood so plunging that you can imagine an engine… central rear! The rear axle is pushed back as far as possible, resulting in an extremely short rear overhang, as opposed to its longer front counterpart, well in the spirit of the “balance” of volumes of a Citroën, even if the whole thing is very far from the manufacturer’s proposals at the time!

Here is another Citroën coupe designed for Guy Ligier. In the mid-1970s, as the SM coupé was nearing its end, Ligier asked Citroën to offer it a coupé capable of replacing it on the assembly lines of its small factory. How about a nice GS coupe ? Robert Opron and his faithful Jean Giret set to work with a proposal that will go as far as the 1:1 scale model stage. Made of plaster, the latter features many innovative themes: retractable headlights with the possibility of making full headlamp “calls” without having to raise them, windscreen in the spirit of the CX (with single blade), CX which is not yet on the market, rear type “Shooting Brake”, side window opening at the rear passengers, ribbed rear window pillar and typical Citroën rear wheel arch. 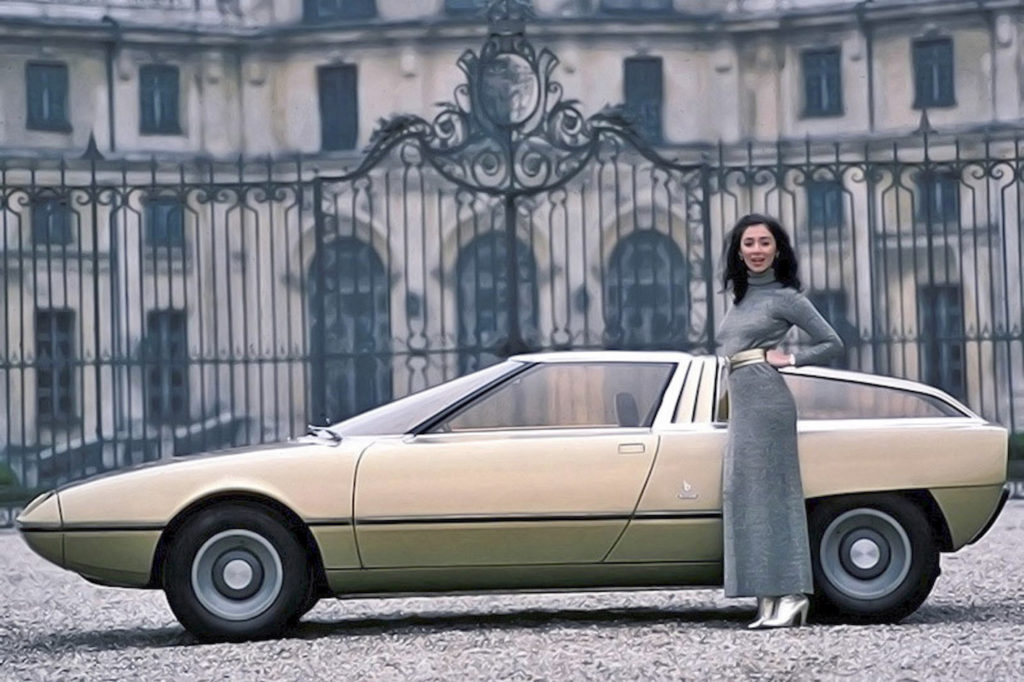 The Bertone Camargue concept car remains the first Citroën GS coupé. No bodywork components are common with the base sedan ! Produced in 1972, two years after the introduction of the GS sedan, this coupé was born by the Frenchman Marc Deschamps during his first visit to Bertone before he joined Henri Chapron. Often attributed to designer Marcello Gandini, this well-known concept car is the first step from the bodybuilder to the French manufacturer. When this Camargue was unveiled in 1972, behind the scenes, Nuccio Bertone was refusing to produce a four-door SM that Citroën had asked him to produce, because the manufacturer did not want to hear about a modification of the platform and Nuccio was desperate to deliver a beautiful object on such a short wheelbase. The continuation of the Bertone-Citroën couple was much happier!

After leaving Bertone for Henri Chapron in the early 1970s, Marc Deschamps made a quick move to Ligier in 1974. Guy Ligier also asked Guy Ligier to design a GS coupe to replace the SM at the end of its life on its assembly lines. Marc Deschamps had just bought a GS Birotor (which he still owns) and so left this vehicle to design a two-door version that was totally in tune with the times with its black protections and sharp lines. On the mechanical side, it was euphoria at Maserati who designed a V4 engine to replace the GS Birotor’s rotary piston engine. Only 1:5 scale models have been sculpted by the French designer.