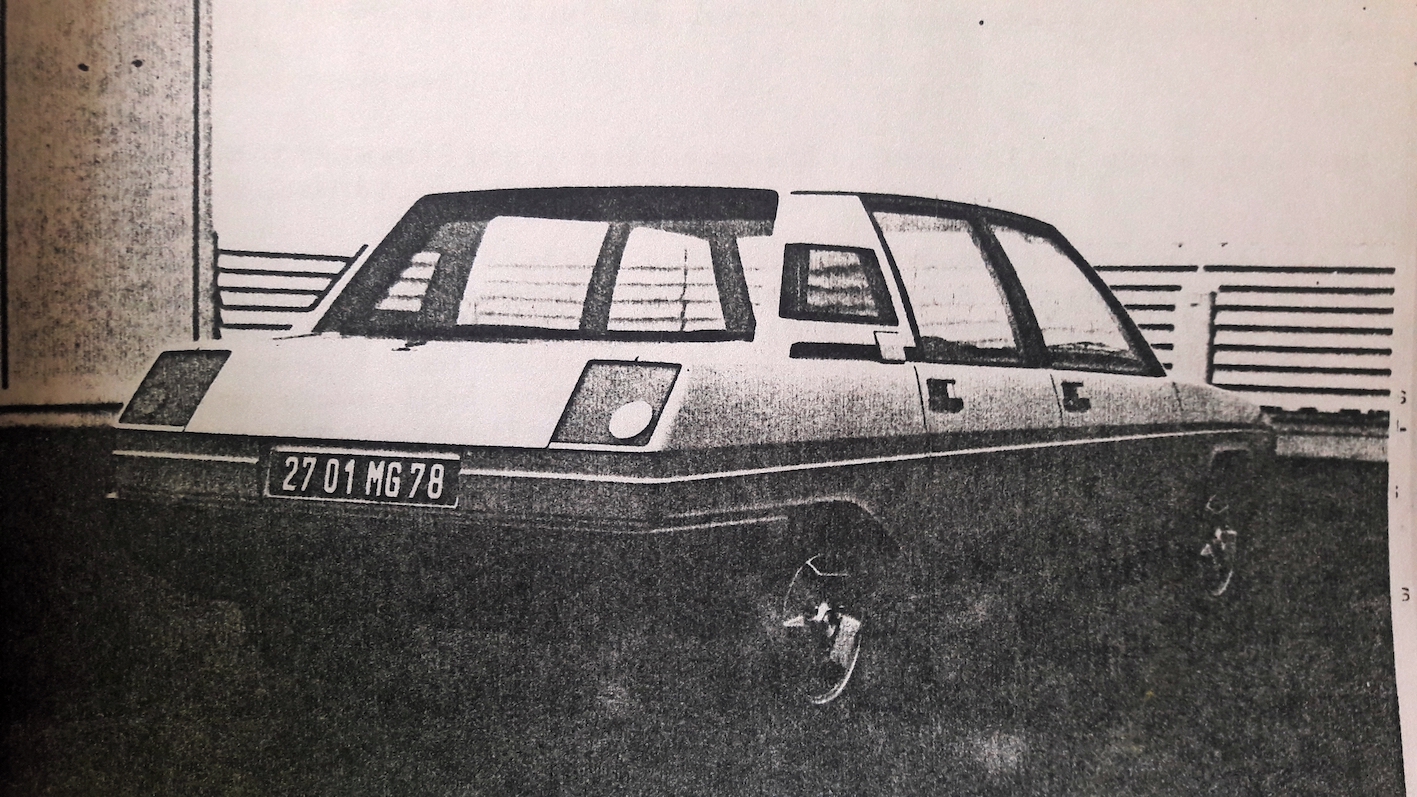 Marcello Gandini’s Ferrari Rainbow was exhibited in the “Bertone” collection at the Rétromobile show. It’s good to look back at how the designer used it: a proposal for the Renault 9!

It is not necessary to introduce Marcello Gandini (below left in 2019 for the reconstruction of his BMW Garmisch concept car: http://lignesauto.fr/?p=10072), who joined Bertone in the mid-1960s, succeeding Giorgetto Giugiaro, until the late 1970s to make way for the French Marc Deschamps. 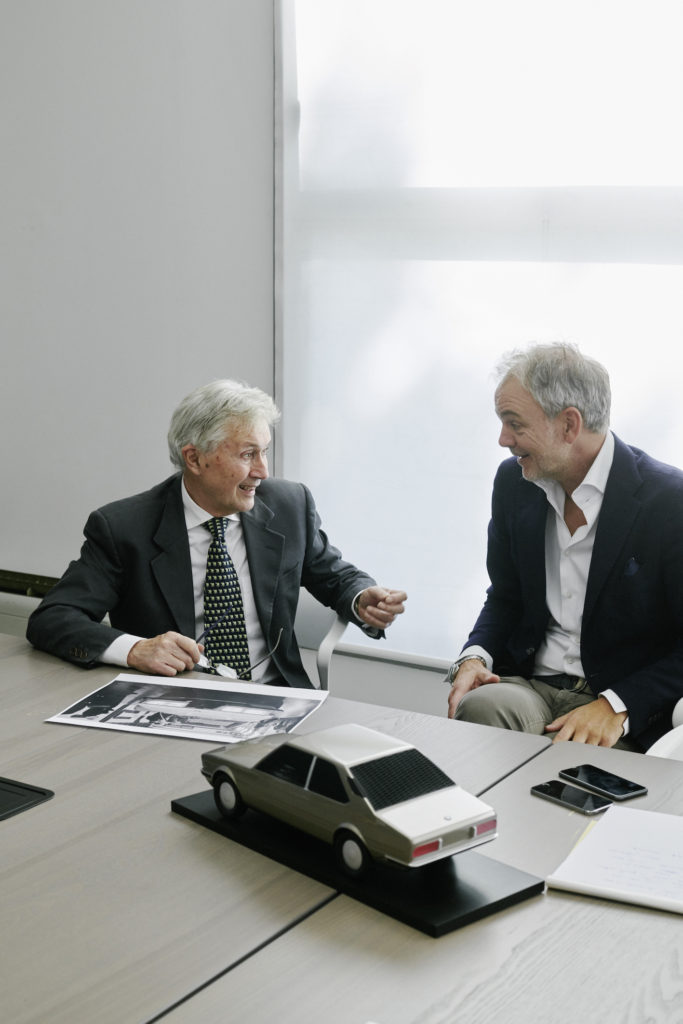 No need to mention the Alfa Romeo Carabo or the Lamborghini Marzal and the Stratos Zero. Less exciting but more profitable are the French Citroën BX and Renault Supercinq. But the latter was carried out outside the Bertone design office because, in 1980, Gandini flew on his own, well helped by the then nationalized French manufacturer, who consulted him on all projects, in particular, we will see him here, for the “Macadam Star”, the Renault 9. 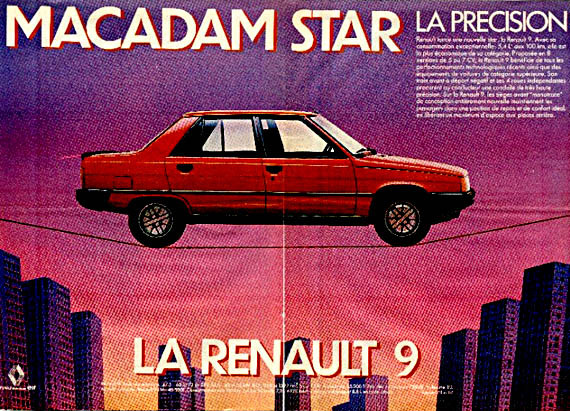 Undoubtedly one of the most common cars of French production. Hence the astonishment to know that Gandini proposed several models, including this one, inspired by his Ferrari Rainbow concept car designed in 1976 while he was still working at Bertone.

Above, a copy of the original document and below, an illustration by Monholo Oumar. 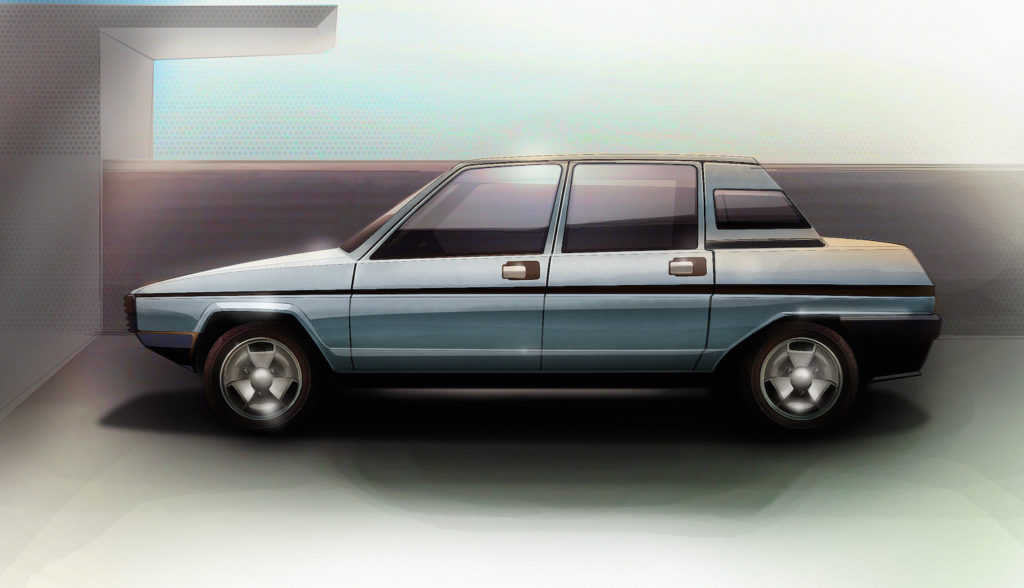 On June 25, 1978, for one of his last works co-authored by Bertone-Renault (project 142), Gandini and his co-worker Pagliano, were interviewed by the Style analysis group led by Serge Van Hove (below, the internal report). Here are some extracts completed by the views of the model of the “Renault 9 by Gandini” and illustrations by Monholo Oumar, an independent illustrator that you can find here: https://www.behance.net/Monholo?tracking_source=search-all%257CMonholo%2520oumar 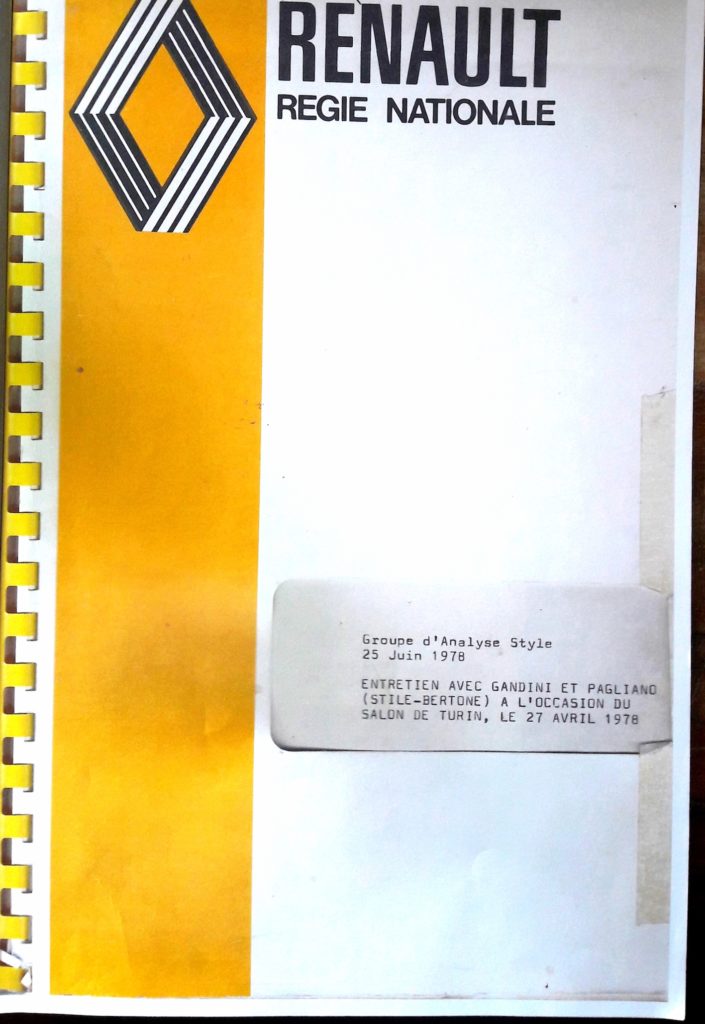 This document transcribes the interview of the two Italians, word for word and illustrates it both by the photos of the model of the 142 project seen by Gandini and the concept cars made by the latter. 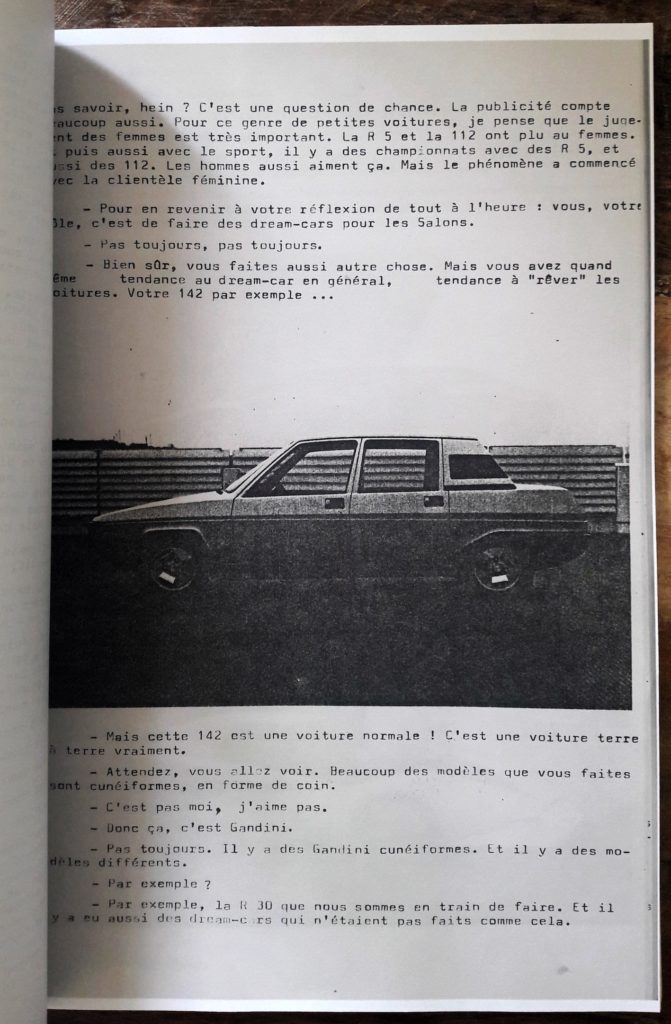 Above, an extract from the report: “But this 142 is a normal car! It’s a down-to-earth car, really.” (Pagliano interviewed by Renault)

Obviously, and the Italian master does not hide it, the R9 proposal made for the Régie of the time, breaks the codes and is very openly inspired by the Ferrari Rainbow also designed by the Italian (below) 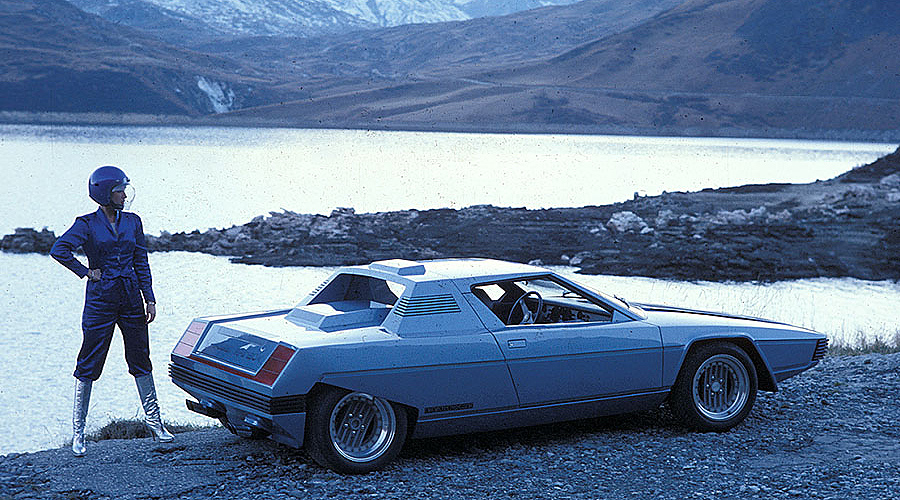 Marcello Gandini’s Ferrari Rainbow (1976) above and the R9 sedan proposal, by the same designer, proposed to Renault two years later. 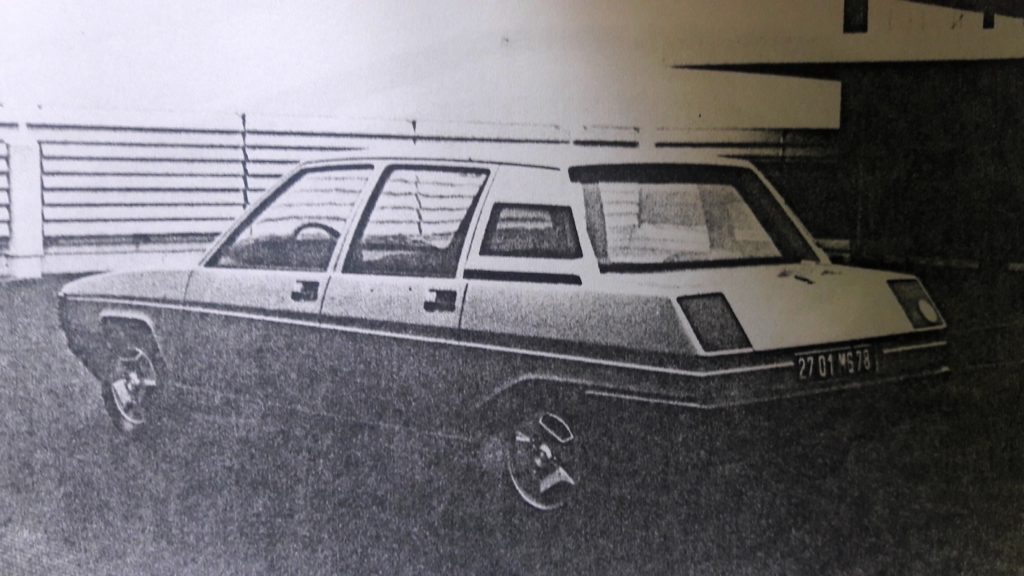 There are several Ferrari themes on the Renault model:

– the cut and inclined side of the rear panel,
– the rectangular lights that are therefore installed on this inclined facade,
– the large groove that surrounds the entire body,
– wheel arches with geometric shapes,
– the rear panel totally faithful to that of the Ferrari… 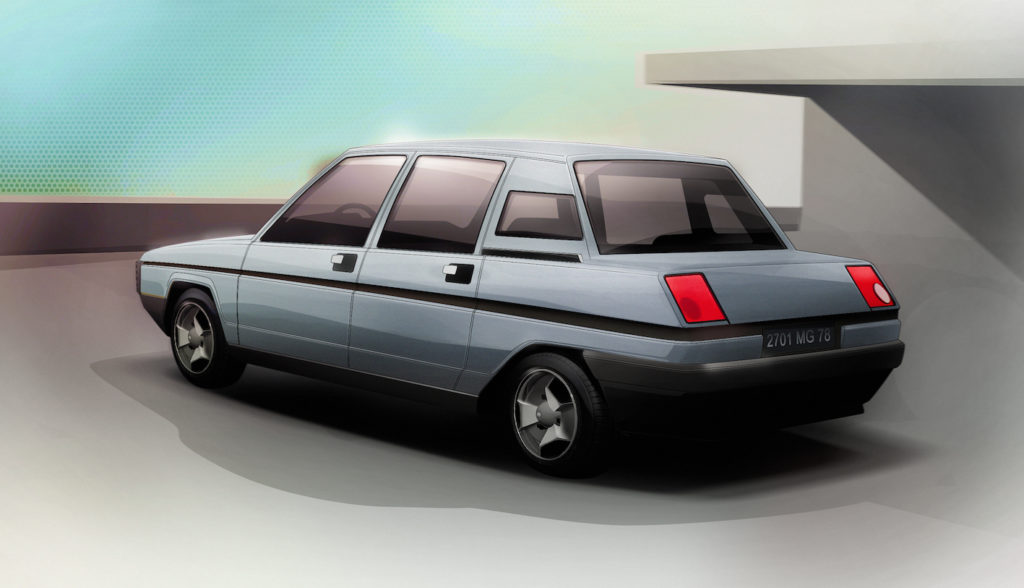 From the front, the common elements are also obvious. Admittedly, we are moving from a “sport coupé” to a real small sedan, but the themes are there: wide striated protective band, wheel arch again geometric and non-circular. 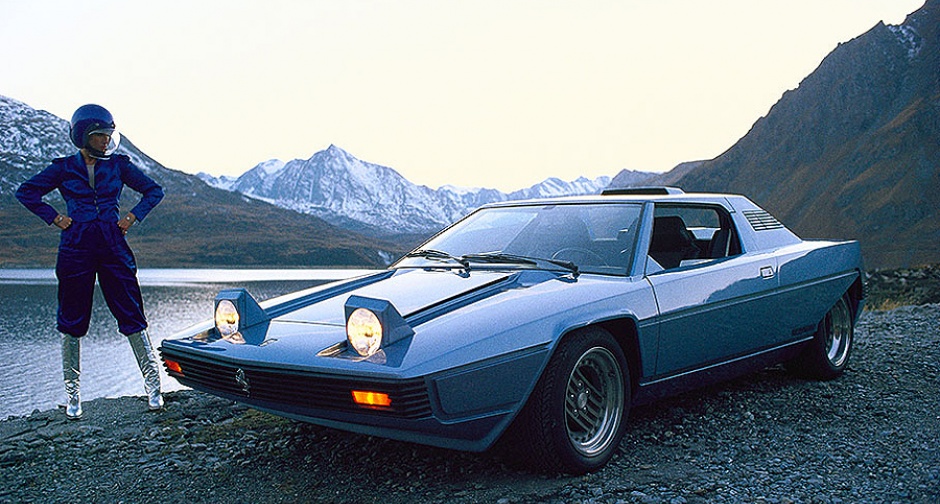 The Ferrari Rainbow above (1976) and the model of the Renault program below: both from the same hand… 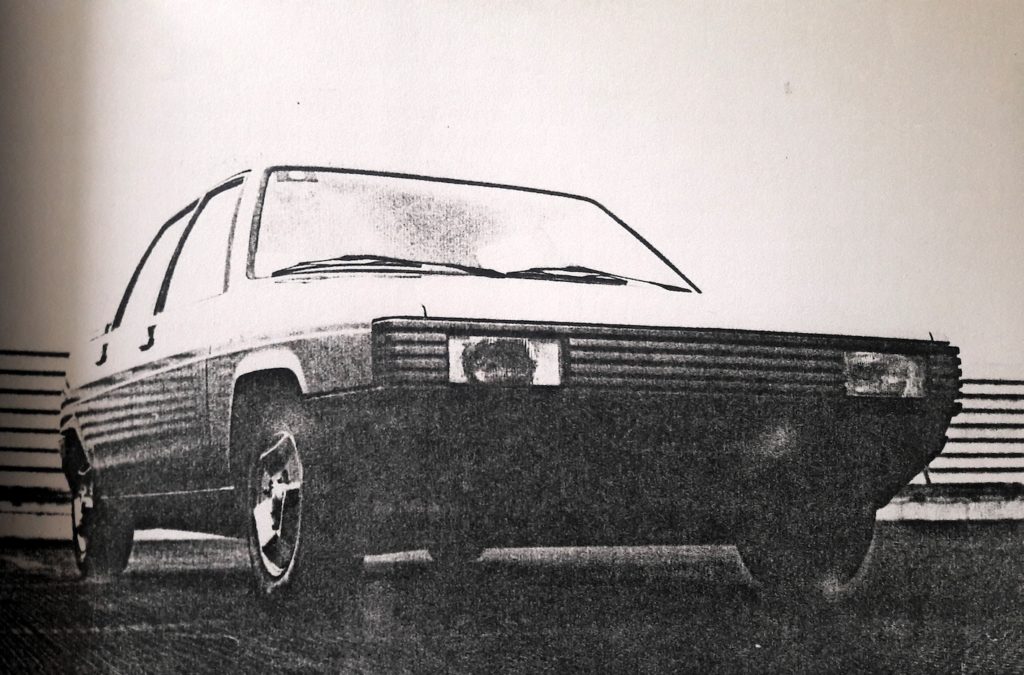 While the document shows a particular interest in this daring proposal of project 142, the author of the interview does not hide his scepticism in the face of such audacity. Nevertheless, he tries to understand the futuristic trends that could be recovered later on in other models. 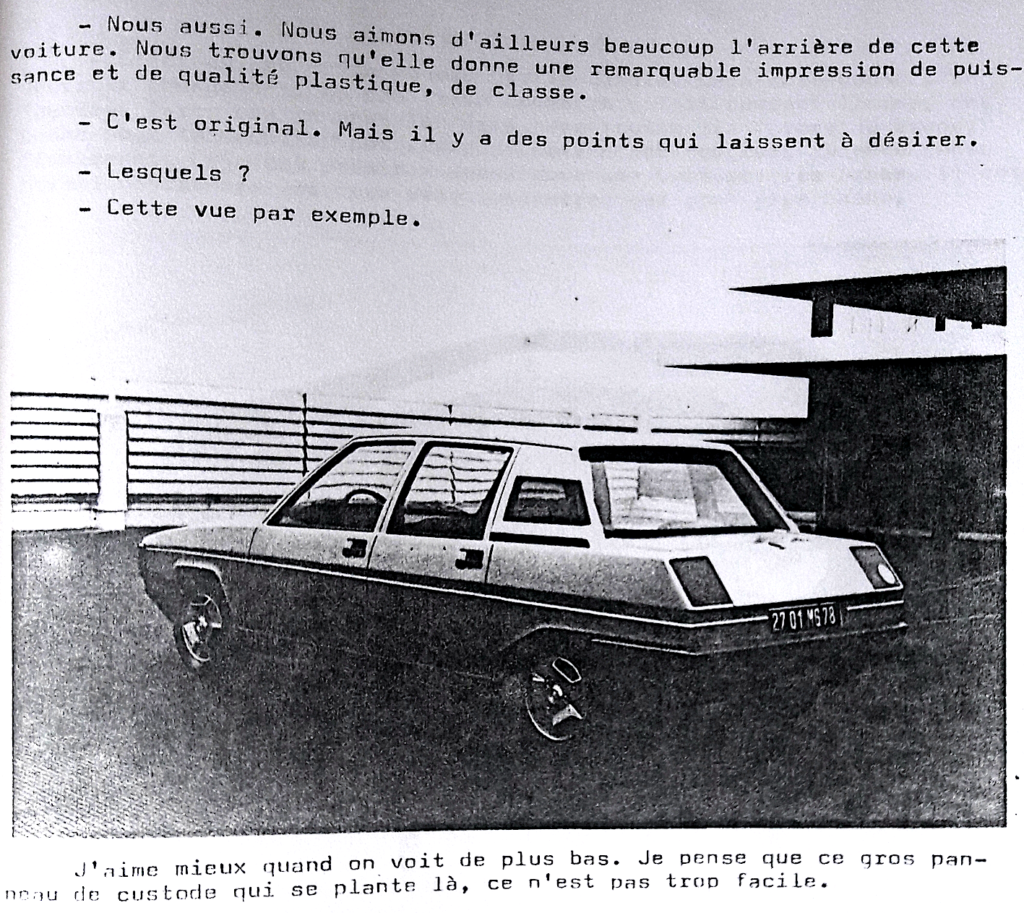 In the pages, we can read Serge Van Hove’s reflection: “If I take the 142 made by Gandini for the Régie, this car was considered too advanced by those in charge. So, if we want to schematize, she’s too much on the side of the dream! Not enough on the side of everyday reality. And so she was dismissed outright.” (below, an extract) 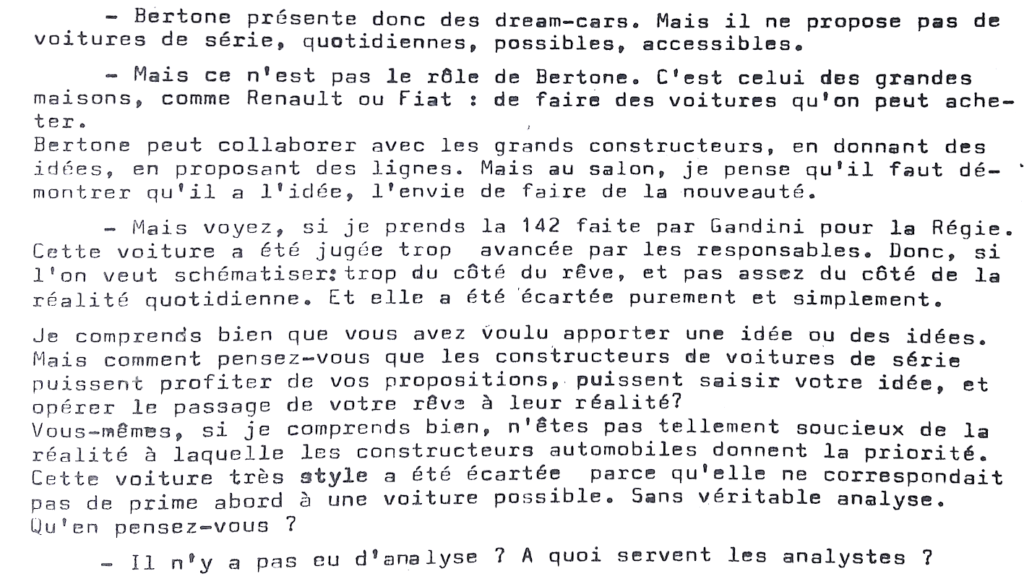 What are analysts for ? Ah ! Very good question…. The problem of the refusal of this Gandini model does not come from its design, considered in itself interesting by the analysis of this month of June 1978. The problem comes from much higher up, from Renault’s product manager, Bernard Hanon, who became head of the Régie in December 1981, four years later.

Bernard Hanon does not want originality for this 142 program. For several reasons, including the following:
– Renault’s desire to go to the United States with this future sedan, which will become the Alliance and the Encore in its hatchback version
– the need to forget the poor commercial launch of the Renault 14 launched in 1976
– the desire to compete with the new Peugeot 305, which appeared in 1977, only a few months before the first models of the Renault 9 project.

This brief is clearly visible here (above and below) with one of the models of the Renault 9 project put in competition with the Renault 18 (which appeared in 1978, the same year that the 142 project started as models) and the Peugeot 305 which was marketed in 1977.

If Marcello Gandini’s project of January 21, 1978 is not finally selected for the choice of the theme of the style, studio C of the Renault style (see the history of Renault design with the tribute to Gaston Juchet here: http://lignesauto.fr/?p=5718) also dares volumes much more original than the one that will finally be industrialized. We can guess it below with a model dated February 1978 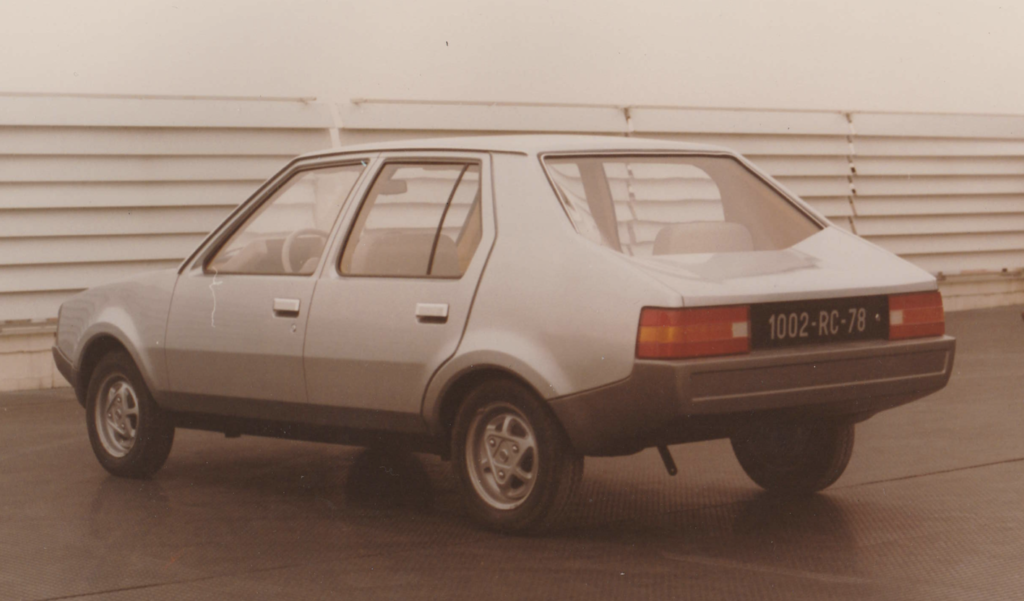 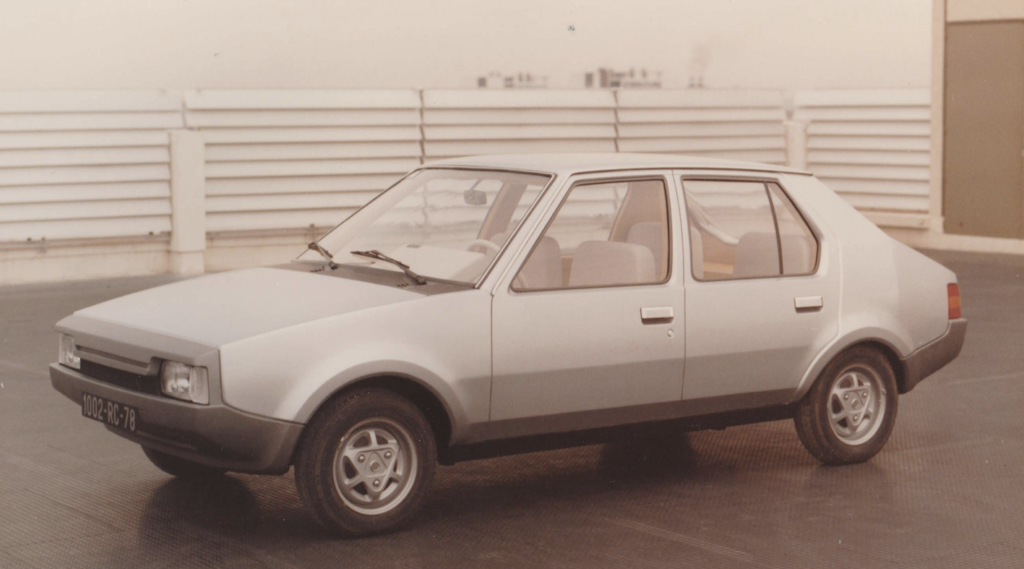 But nothing will do, the Renault 9 must be commonplace, so it will be. It is time to move on to the final stages of style selection in Renault’s modeling workshops. Below, one of the last configuration models of the Renault 9 style, where we can see some differences with the finally industrialized product, especially at the bow level, below: 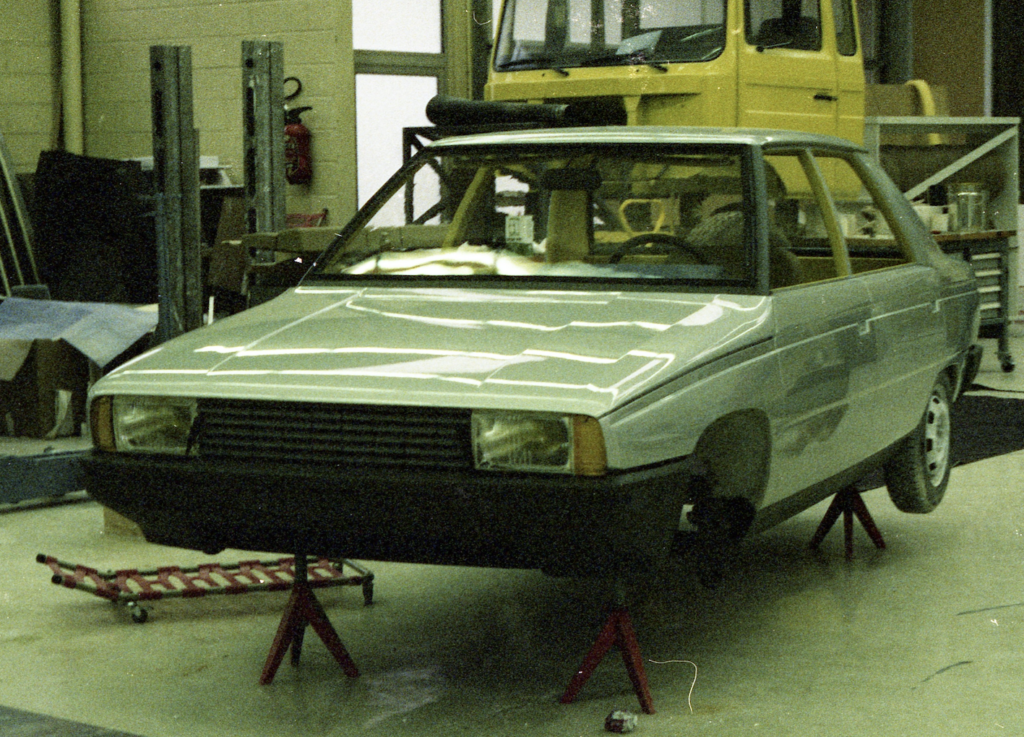 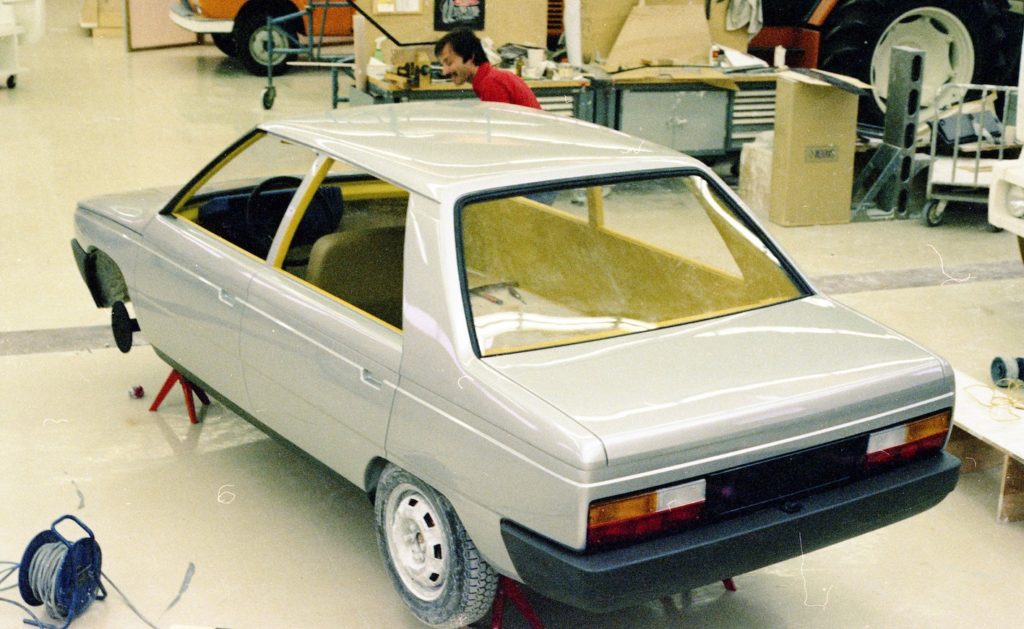 It should be noted that in 1978, in addition to the model of the future Renault 9, the workshop had other much more secret works which unfortunately did not lead to success: the small Renault and the Alpine NGA (below)

In the end, even if the Renault 9 has made some designers blush with shame, its career will be profitable with 3.2 million units to which we must add almost as many Renault 11s. Let’s not forget that these two models replaced the R14, which did not exceed one million units produced…

Meet Marcello Gandini in 2019 alongside “his” BMW Garmisch recreated by BMW….