More than eighteen months ago, your site published a trip in the archives of General Motors. With the arrival of the new Corvette C8 with a central rear engine, it seemed appropriate to us to broadcast this “post” before starting a studious September !

How about a little trip to the General Motors archives? Let’s just publish here some style projects of the various brands of the all-powerful GM from the 1950s to the 1970s. You can also buy posters of these concept cars and many other documents about GM brands on the official (and exciting !) :  http://gmphotostore.com

Let’s start with the only color document. This is a 1:12 scale model of a 1961 GM Sport Coupe project (no specified make). Very good year which saw the birth of the Ami 6, the R4 and the Simca 1000. No kidding, please…. This model was made by a young apprentice who was taking the model making and prototyping courses at GM. This concept car has never been presented to the public.

In March 1970, the GM Chevrolet studio worked on the 72′ vintage of the Chevrolet Impala and despite the exemplary state of finishing of this proposal, it was indeed a Clay model. Note the cut-out drawings above the model….

Just after the war, Harley Earl, head of GM design, encouraged his teams to create concepts of all kinds and, for Pontiac, the young designer Ned Nickles proposed this project.

In December 1969, the Chevrolet studio worked on the “Monte Carlo” project for the 1973 vintage. The general theme is there, but the fires and shields will evolve later.

In November 1968, Chevrolet’s management met under the dome of the iconic design centre to review the 71′ vintage. On that day, the model of the Impala 1-Scale Clay Coupe was on site.

In mid-1962, the team of stylists from the Pontiac division of the GM Design Center worked on the XP-788 project that would respond to the Corvette. This project is being developed in the “secret” studio set up by Bill Mitchell, the “Warehouse Studio” located at the far south of the technical centre. Pontiac stylists will not be able to convince management with their project. (above and below)

In mid-1963, Bill Mitchell, in agreement with the management of the Chevrolet division, launched the XP-807 program, which aimed to develop a brand new Corvette for 1967. This program was based in particular on a composite material bodywork and would have been very different from the finally industrialized Corvette.

In the summer of 1963, the Cadillac studio reserved the dome of the technical center to present a scale 1 clay model of the future Eldorado, which was scheduled for industrialization in 1967. The project is far from being completed….

The GM XP-92 program was developed in October 1959 to create a four-seater sports coupe for the Pontiac division. This model in resin and fibreglass presents beautiful stylistic evolutions for the time but was redesigned shortly after its presentation at the end of 1959 (above and below).

This Buick XP-75 program was designed to create a luxurious two-seater car that was then known as the Skylark III. The project began in 1957 and resumed the study work of the Buick of the 59′ vintage. It was a very serious program since two rolling prototypes were produced by Pininfarina in Italy. In the mid-1960s, the XP-75 disappeared…

Here are our two Buick XP-75 prototypes that we talked about above this time presented together and we can guess some differences, especially in the front part. The white proto was dismantled in 1960 while the grey proto was transferred to Buick where its trace was lost in 1967…

In October 1959, the Pontiac studio moved the XP-92 prototype outside the dome for evaluation by management. This prototype was called “Phantom” by the design team. This sports coupé project was quickly abandoned because of its development cost, which was considered too high.

In July 1962, the Pontiac studio offered this full Clay model of a three-box sedan on the patio for a validation test. We don’t know what happened to this prototype, nor what the management thought of it…

At the end of 1959, the Chevrolet division’s stylists unveiled this XP-722 project for a “mid-size” sedan with jowls as front fenders! As the legend of the time says, the stylists are “totally out of the box”.

The 1965 Pontiac Grand Prix fastback was first known as the XP-765 program code and was presented here in 1963 as a fiberglass model. 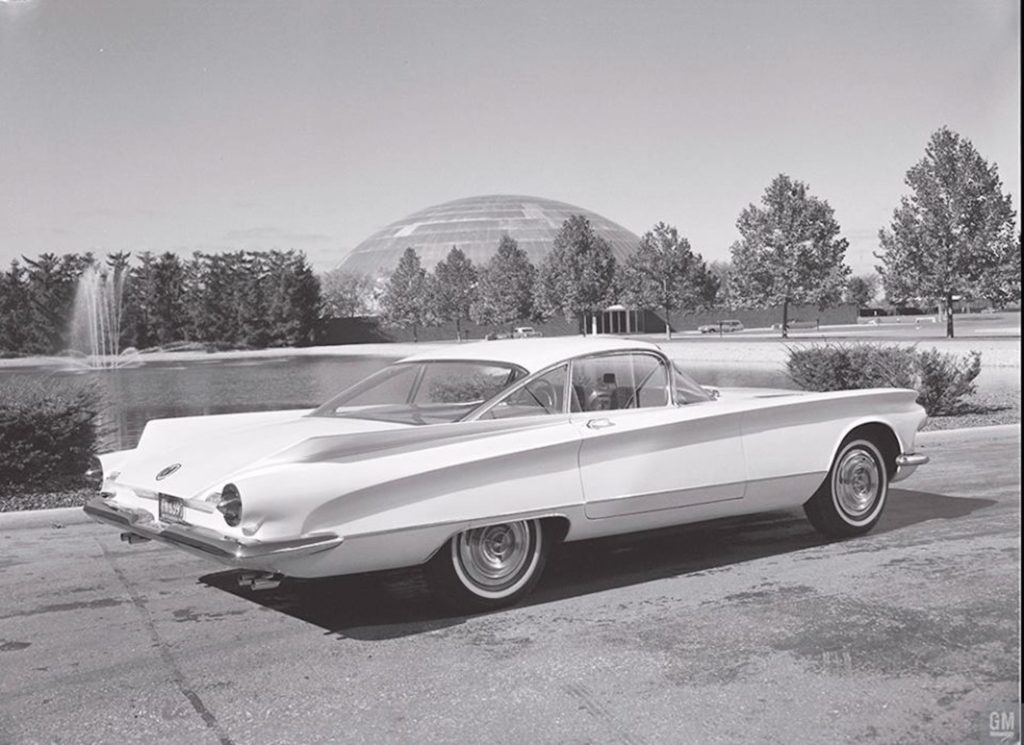