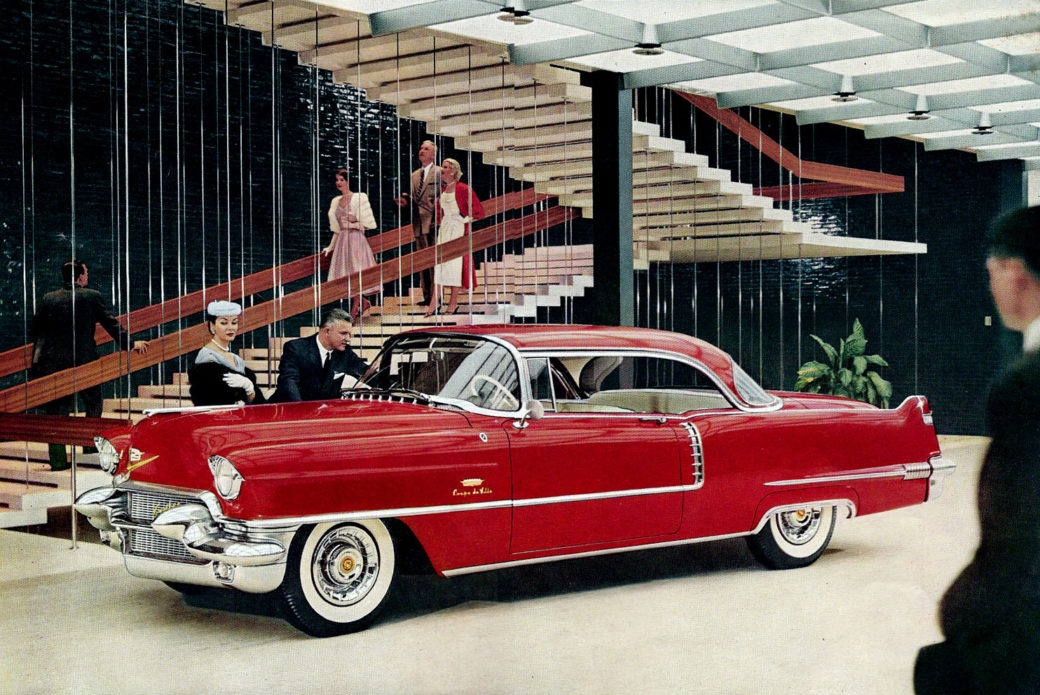 1959 – 2019: 60 years have passed between this video that plunges you into the heart of the General Motors design office and today.

It was also an opportunity to rediscover this General Motors technical centre located in Warren, Michigan. Embark on this pleasant journey !

This centre was inaugurated on May 16, 1956 by President Dwight David Eisenhower in front of a crowd of 5,000 people and on national television. Designed by architect Eero Saarinen and built from 1949, the centre was completed in 1955. Saarinen’s objective is to provide a symbol of the industrial environment of the future, where the environment is both beautiful and functional. Saarinen then wanted to symbolize his work with low, long and horizontal buildings.

The Tech Center cost about a hundred million dollars – the equivalent of half a billion dollars today. Located in the eastern suburbs of Detroit, the site was also declared a national historic monument in 2015, among Eero Saarinen’s greatest creations. In addition to his famous tulip seats, Saarinen was the architect of the Gateway Arch in Saint-Louis, the IBM headquarters, and the TWA terminal at JFK International Airport.

For more than 60 years now, such an infrastructure has suffered the ravages of time and many rehabilitations have taken place. One of the last ones (2014) concerns the mythical dome which, next to the modeling rooms, allows to discover, comment, refine and sometimes adoubé projects with artificial light reproducing the daylight. And while the expansion of the design centre along the lake was not finally completed, other major parts of the site have been restored, such as the two staircases in the R&D reception hall and the Design Center.

The spiral staircase of the R&D administration building (above and below) is one of the preferred architectural highlights for employees and visitors. Designed by Kevin Roche and nicknamed the “floating staircase”, it is supported by thin cylindrical rods, anchored at the top and bottom of the building. The Norwegian granite steps represent a total of… 25 tons ! Seeming to float in space, these steps are actually suspended on stainless steel rods in the center of the spiral that form a converging cone, supported in its lower and upper parts.

Another equally emblematic staircase (photos below) is located in the access hall of the Design Center. A hall 35 m long and 10 m wide. This Centre was designed with many separate design studios, each with a large drawing room with the necessary space to sculpt the models in clays.

The Design Center (then called Styling), was the last of the first main buildings to be completed. It is therefore in this hall that the second staircase is visible. Still designed by Kevin Roche, the staircase consists of overlapping 2 m long by 1.20 m wide terrazzo slabs.

These steps are suspended and held in tension by stainless steel rods on the ceiling, while the handrail is made of teak. The place is so mythical that GM takes the opportunity to make catalogue covers (above).

The dome (below after its restoration in 2014) is 57 m in diameter. It can be converted into an auditorium for an audience of more than 1000 people, or used as an exhibition room.

The outdoor dome (below the Buick XP-75 Skylark III 1957 concept) is 20 m high and has a range of nearly 60 m. It is based on the principle of building a box on which the aluminium shell is thinner than the shell of an egg !

Outside this dome, a large patio serves as an exhibition area and its cladding is paved with dark brown-red hexagonal bricks, specially developed for this area. We can guess these bricks below on the right of the picture where Hearley J. Earl’s first concept car, the Y-JOB, is on display.

The lake is artificial, with a surface area of 9 hectares. Its average depth is just over 2 m. The two main fountains by Alexandre Calder pump more water than all the major fountains in Versailles! The main fountain, located on the west side of the lake, pumps 22,000 litres of water per minute to create a “water wall” 35 m wide and 17 m high. The lake has several varieties of fish, which helps to keep algae levels low. GM employees are allowed to fish, but only with a release of the fish….

For his project, Saarinen used automotive original materials and assembly line construction methods. The interior walls were built in factories and assembled on site. To make the buildings as flexible as possible, Saarinen used a standardized module. This applies not only to steel construction, but also to lighting, heating, ventilation and fire protection systems, as well as laboratory furniture, storage cabinets, partitions and door elements. The module of just over a metre and a half was chosen because General Motors wanted larger offices (nearly… 5 metres wide!) for its employees. After the completion of the Tech Center, this module served as a model for the industry.

The Tech Center buildings represented the first major installation of laminated panels and the first use of a sandwich panel of a single thickness that is a complete wall in itself. Instead of walls built of 35 cm thick masonry – it was a building practice for hundreds of years – the same thermal insulation qualities were obtained with panels only 5 cm thick.

This has considerably increased the usable space. The panel is a sandwich with a steel skin glued to a thick honeycomb core of Kraft paper filled with granular insulation. The construction in glazed ceramic bricks was undertaken specially at Saarinen’s request after some experiments. GM financed a large furnace to produce the bricks. Saarinen said he wanted the Tech Center to look like autumn leaves reflecting the late afternoon sun, so he chose colors of crimson brick, orange, yellow, blue, and neutral olive, slate and black.

Saarinen also took some concepts to the automotive industry. For example, the windows of the buildings were quite revolutionary for the time. Saarinen’s design is based on the mechanical seals then used on car windscreens. Most of the buildings on the Technical Centre site have large entrance halls open because Saarinen wanted to be able to present automotive products…

Here : video of 2015 during the inauguration of the new Technical Center building : https://www.clickondetroit.com/news/local/gms-1-billion-investment-fuels-warrens-comeback