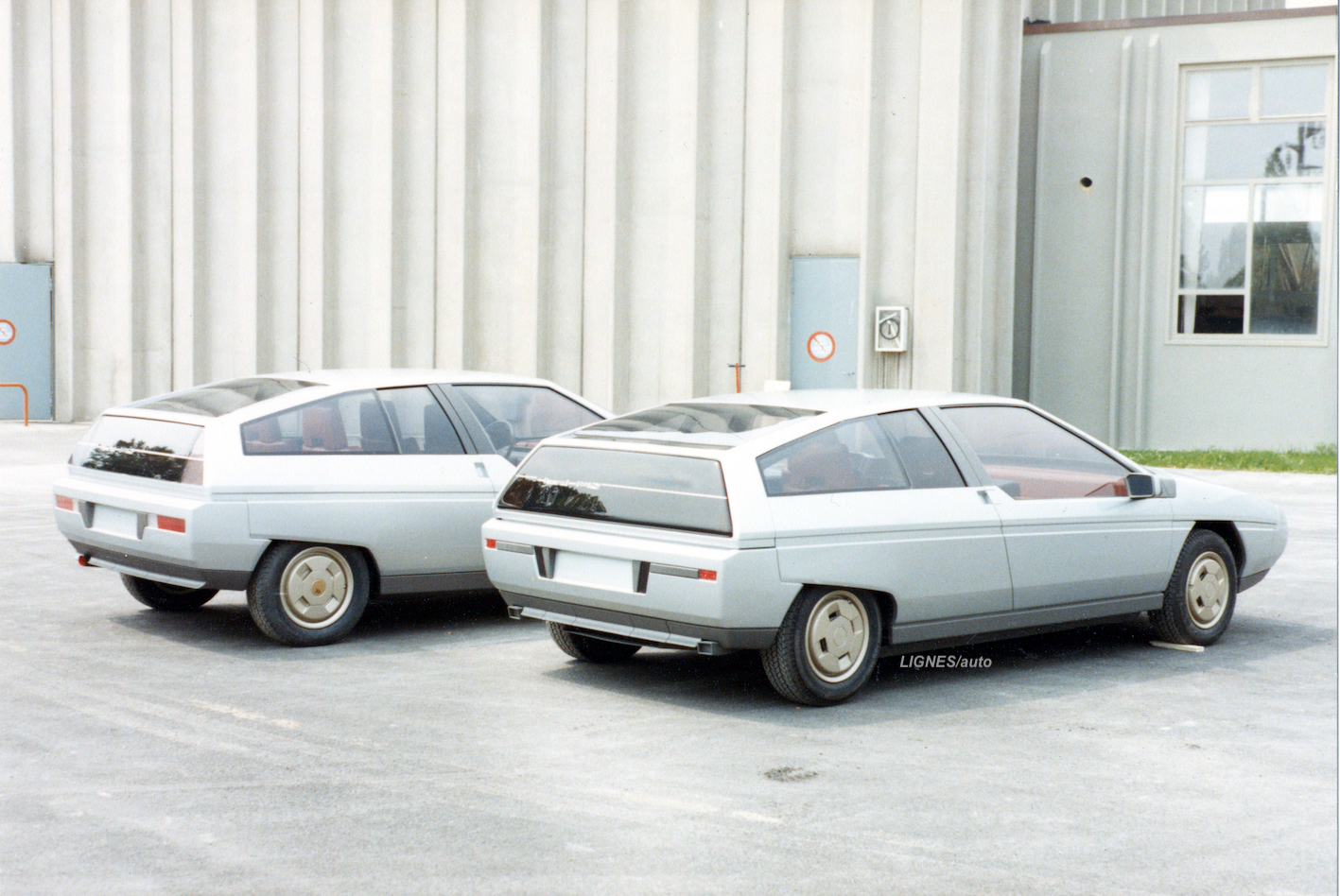 The Citroën brand has just changed boss. Vincent Cobée replaces Linda Jackson. During his quiet time (!), we offer him the opportunity to rediscover Citroën’s rich heritage. Here, in detail, is the genesis of the Citroën BX coupé designed by Bertone, the same year the BX sedan was presented to the general public : 1982.

Dark, secret and incomplete : here is the Citroën coupé designed by Bertone as it is kept today in the reserves of the French manufacturer’s Conservatoire. It is at least proof that it did indeed exist, but we couldn’t be satisfied with this model of habitability, although it is little known and very revealing of the concept.

We had to go back to the source of this project that could have saved Bertone in the mid-1980s and certainly prevented the disappearance of this formidable representative of Italian creativity ! Rewinding the thread back to the origins of the collaboration between the Italian master and Citroën takes us to the 1972 Geneva Motor Show where the presentation of the Camargue coupé based on a Citroën GS and designed by Bertone took place.

This concept car was partly designed by the Frenchman Marc Deschamps, who later took over the Italian design office from the masters Giugiaro and Gandini, no less… ” The Camargue was born at the very beginning of my period with Bertone. Marcello Gandini could not take charge of his drawing, too busy after the Turin and Brussels salons. There were only five weeks to complete the work. A record! We had chosen this theme of the GS coupé for two reasons. The first one, a bit futile, was because I had just bought myself a GS 1015 ! The second, and no doubt more interesting, was that Bertone had let himself be convinced by the sales director to try a rapprochement with Citroën, to imitate that of Peugeot with Pininfarina.“

Already at that time, the production lines of the Italian coachbuilders’ factories established in the 1950s had to be made profitable when they were pushed to support the production of giants such as Fiat and other groups. Peugeot had turned to Pininfarina, so why not court Citroën? A good idea for the Italian bodybuilder since the BX saloon, the ZX, the Xantia and the last big Citroën, the XM, were finally born in Bertone’s style studio in Caprie, just outside Turin. It was during this period that the project of a BX coupé was proposed to Citroën. The planning of the first plaster model dates back to September 1982, the first scale 1-style models were presented to Citroën management in April 1983.

In the life of a design enthusiast, there are some encounters that make more of an impression than others. At the end of the 1980s, I had the opportunity to interview Nuccio Bertone (1914 – 1997), the son of the creator of the eponymous Carrozzeria. Inevitably, we had come to talk about this project that I had been running after for some time ! Nuccio Bertone obviously hadn’t shown me any photos, I had to be content with a few words that confirmed that this coupé did exist. “The studies of the BX coupé is a very logical continuation of our collaboration with Citroën” he confirmed to me then.”

“We studied the hypothesis of deriving a two-door four-seat coupe from the base of the sedan we had designed. We studied all areas, both in terms of design and production possibilities, as well as costs. We went further than we could have done, especially with a truly changing style. Our coupe was amazing, with a top-of-the-line powertrain that was nothing like the sedan’s! For Citroën, the price was considered too high to launch this model in production. It was a real shame ! I remember the afternoon during which we discussed these problems with Xavier Karcher (Citroën’s number 2 with Jacques Lombard at the controls).”

“I sought to defend the project by focusing on production volumes that needed to be high in order to recoup our investments more quickly. At the same time, the price could be lowered a bit. Mr Karcher then told me that our coupé would be a direct competitor to BMW coupes in view of the price and that Citroën did not have the customers for that! No doubt he was right but I withdrew from the showroom not really satisfied ! “ Bertone was going to produce a Citroën BX coupé, but only one, in 1986. It was the Zabrus concept car.

Despite the French brand’s refusal to let the Italian bodybuilder produce it, the BX coupe would pave the way for the XM, which would replace the CX. The two Bertone creations have a lot in common. It was Marc Deschamps who was then at the helm of the small design studio in Caprie, a suburb of Turin. It was therefore he who designed the Citroën coupé. Who better than him could reveal the secrets of this study, which was taken to the gates of industrialisation ?

“Yes, I am the author of the lines in this coupe. At the time, we had made two 1:1 scale styling models. The theme we chose at the time was the hunting station wagon, which was beginning to be a fashionable concept. The specifications were quite simple, even if the technical architecture was difficult to rework, especially because the front suspension was too bulky and the bonnet was too high”.

“It was supposed to be a two-door coupe with four real seats. At Bertone, this project was of paramount importance because we were looking for a second or third product line to manufacture in Grugliasco (the Bertone factories at the time). At the same time we were in discussion with Volvo and we had to get out of the industrial monoculture linked to the production of the Fiat X1/9 in order to survive. We finally saw what happened…”

Contrary to what Nuccio Bertone might have suggested at the end of the 1980s, Xavier Karcher did not necessarily want to kill this project known internally as “G2”, as Marc Deschamps recalls. “As much as I can remember that Xavier Karcher was nevertheless rather in favour of the project, as much at the level of the PSA group, that was another matter. However, it is indeed thanks to this BX coupe project that we started the debates on the style of the… XM !”

Without the study of the BX coupe, the XM would probably not have been designed like this, as Marc Deschamps recalls : “When we went with Nuccio Bertone to Neuilly (then Citroën’s headquarters since 1982) to make progress on the BX coupe project in 1983, I found myself having lunch with one of Citroën’s product managers after our morning meeting. He asked me the age-old question of how I imagined the car of the future. At the time, we were working at Bertone on the Volvo 780 and our heads were full of different top-of-the-range concepts for the Swedish! So I told him that I would definitely see a pseudo three-box for Citroën’s future flagship. And he cuts me off, telling me I was wrong. “We have to make a coupe”, he said. And that’s how, in the evening, while waiting for the plane to return to Turin and talking to Nuccio Bertone, I drew a sketch of the future XM on a piece of paper, inspired by the BX coupe. And that’s how the legend was born that the style of the XM was drawn in an airplane!”

An airplane. The BX coupe probably dreamed of becoming one with the famous “top-of-the-line engine, in no way comparable to that of the sedan” but whose characteristics are still unknown today. Aesthetically speaking, Marc Deschamps’ design is in the vein of the creations of the time. The theme of the hunting station wagon is modernized based on his proposal. As for the black trim of the windshield bay, it will be used on the XM.

At the front, the Citroën coupé inspired the design of the Chevrolet Ramarro concept car drawn by Bertone in 1984. At the rear, the two models made in Caprie offer divergent solutions with, on one of them, a small Lamborghini Marzal side! The lights are placed inside the tailgate with lighting that diffuses through the window of the flap. On board, the board is new and abandons the pseudo moonroof that was designed for the second-generation BX sedan.

The materials seem obsolete but, put in context, they give a much more luxurious vehicle feel than the sedan was, according to Nuccio Bertone himself and the specifications, which state that “the BX coupe will have to present a high and refined class, especially inside”. Everything is different in this world and very few parts are common to those of the sedan. The coupe’s strength came from its roominess but also from the volume of its vast trunk, which was accessed through a fairly large doorway. The luggage shelf is functional on the interior model… You can see how far the project went in its design with surprising details, such as the seatbelts embedded in the front doors to accommodate a possible version intended for the United States.

With a length of 4.30 m and a height of only 1.26 m, the Bertone coupé displays a Cx value of less than 0.30 in the Pininfarina wind tunnel where it was tested. In short, it meets the philosophy required by the specifications, which wanted to make it “the brand’s flagship in the range”.

But in 1983, Jacques Calvet was appointed head of the PSA group. His objective was obviously to refocus the purely automotive activities internally. The Bertone coupé project of the early 1980s was therefore not validated by this new management. Nevertheless, the rather original design of the large XM sedan unveiled in 1989 was accepted.

From then on, the future of the association between the Italian bodybuilder and Citroën will be clouded, as will that of the historic marriage between Pininfarina and Peugeot. In 1991 and 1993, the ZX and Xantia are still signed Bertone. These will be the last two major joint projects. This will be followed by a disparaged C5 saloon, then the arrival of Jean-Pierre Ploué at the head of Citroën’s design department in 1999, which will open a new chapter in creativity for the French automaker.