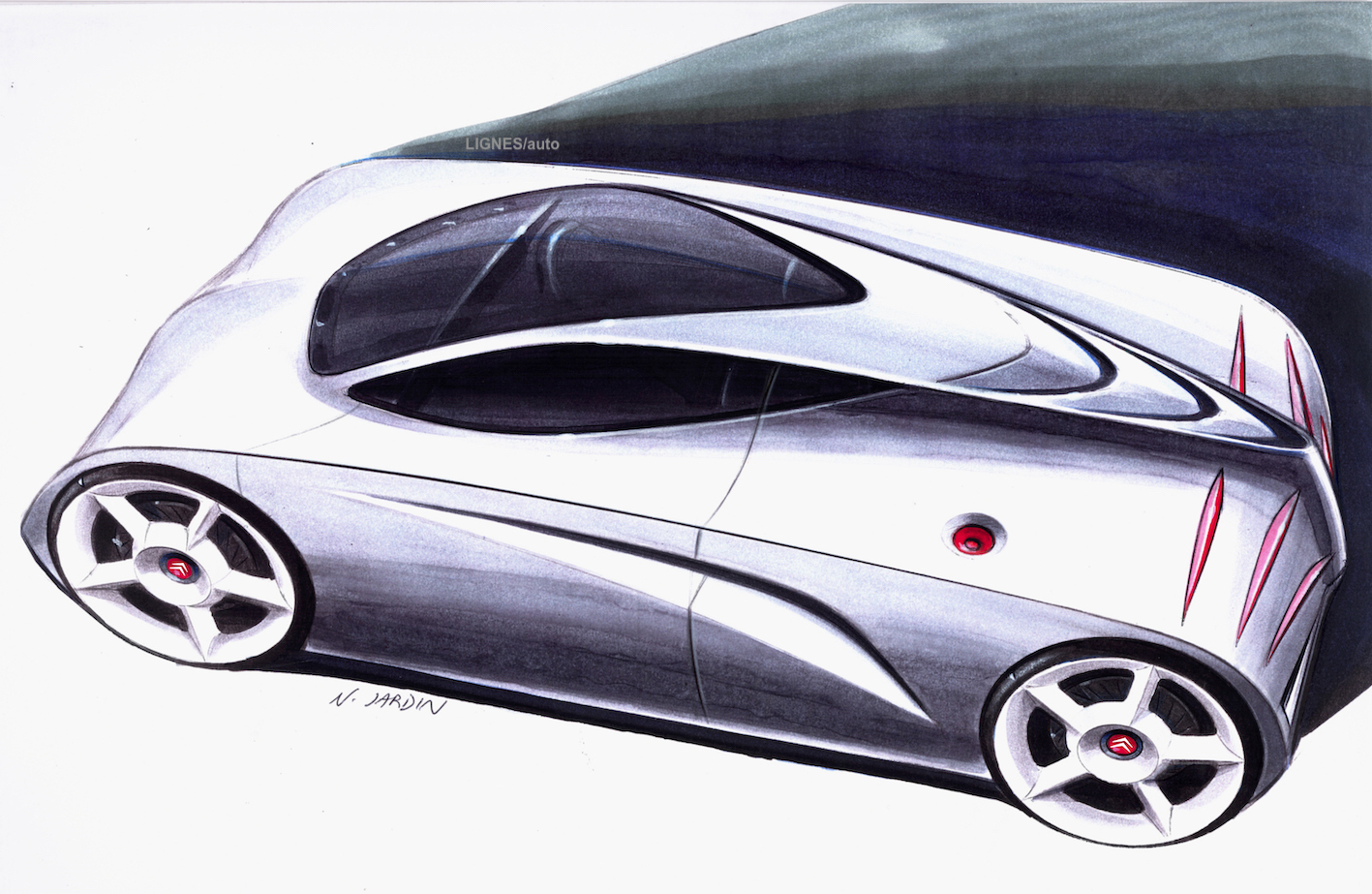 The French designer Nicolas Jardin, who now works for Renault Design Industriel after having worked for Pininfarina, has never crossed the doors of Citroën design. However, he is the author of a unique piece, signed with the double chevron, which today remains an exception in the history of the brand’s style, as it is signed Pininfarina.

The Italian carrozzeria in this decade of the 1990s is like all its friends and competitors : constantly looking for customers. As far as Italian customers are concerned, everything is going pretty well since Pininfarina continues to sign breathtaking bodies for the famous brand with the rearing horse. In fact, at the end of the 1990s, Ferrari 348 “mules” were turning on the Fiorano racetrack, hiding the mechanics of the future Ferrari Enzo (below), an iconic model that will be launched in 2002. It is of course Pininfarina who will be the author of the styling of this Ferrari with Ken Okuyama (real name Kiyoyuki) at the helm of the Italian carrozzeria’s styling office.

But the Italian bodybuilder feels that the wind is turning, especially with the strengthening of the Ferrari in-house style office, so he has to find clients… Nicolas Jardin remembers this period as he joined the Italian style office in the second half of the 1990s. “At the time, I’ve been with Pininfarina for a year. I arrived in Italy after a long internship at Matra where I discovered for the first time the atmosphere of a design office. After a year in the army, I sent letters all over the world and I was recruited by Ken Okuyama, who had recently been head of Pininfarina’s designers”. Ken Okuyama is known to be the designer of the Ferrari Enzo, but also the Honda NSX. However, on the design side, we prefer to remember that he is the father of the Rossa presented by Pininfrina in 2000.

In the small Italian styling centre, designers work on numerous projects, whether Ferrari, Mitsubishi or Honda. “There weren’t many of us at that time,” Nicolas recalls. “Less than ten designers.” Pininfarina seized the opportunity to reveal a concept car in the early 2000s by replicating work previously done on a mid-engine sports coupé. It will be a Citroën, because if the Italian works with Peugeot, it is not unthinkable that he could do the same with the other brand of the PSA group.

Incidentally, Pininfarina knows that Bertone has been a privileged customer of the French manufacturer for many years and that even Giugiaro has worked for serial programs in great secrecy. It’s decided, the concept car of the beginning of the decade 2000, that of the new millennium, will be a Citroën! “Pininfarina wanted to propose this show car as a tribute to Citroën to envisage a stylistic writing that could interest them“, Nicolas Jardin explains today. In Cambiano’s styling office, the French designer gets down to work with his office colleague, Carlo Bonzanigo. “I’m working on this Osée project with him. We’re both in the same space, he’s focused on the interior style and I’m on the exterior. »

Carlo Bonzanigo made a stint at the heart of Citroën design at the end of the 2000s before returning to his homeland in Italy and taking over as head of Pininfarina’s style from Fabio Filippini. At the end of the 1990s, he adopted the three-seat interior architecture with the driver in the centre for the Osée. Pininfarina is a follower of this layout, which he inaugurated with the 1966 Ferrari 365 P Berlinetta Speciale. This architecture is a classic for many designers, such as Giorgetto Giugiaro who, in 1968, endowed his first Manta concept car with it.

What are the guidelines for this first and only Citroën Pininfarina concept car? Nicolas Jardin remembers “that there wasn’t really a starting brief for this gram. It was a time when Pininfarina was making one-shot cars, notably for the Sultan of Brunei, or small series to develop his business.” But with the drying up of this type of project, the idea of offering a Citroën badge show car made sense, even if, at the end of the 1990s, the collaboration with Peugeot is still relevant today. “But all this work coincided with the arrival of Jean-Pierre Ploué,” Nicolas reminds us. “At the very beginning of 2000, he set up a powerful design studio, and at that time there was no longer any reason to keep or create consultations with outside design offices. »

Pininfarina’s desire to forge ties with Citroën is emerging as Jean-Pierre Ploué closes the doors to this type of collaboration. Bad timing! Since then, Pininfarina has lost Peugeot as well as Ferrari, but continues its “one-shot” policy and has signed the design of a supercar that will be produced by a sister company Pininfarina Automobili. Not to mention its links with certain Chinese and Vietnamese manufacturers. But let’s come back to the Osée which bears its name so well because it was necessary to be daring to try to find an opening within the PSA group! “With Carlo, we worked on this project in the years 1998-1999,” says Nicolas Jardin, “and then it was put on hold for a few months. The theme I had chosen was a set of arches on which I came to hang paintings. I wanted to play with these sometimes concave, sometimes convex volumes. »

Dive into a nautical universe… “That’s a bit of a sailing world. I wanted to express a light, agile, almost empty vehicle with whales structuring the sails, like on a Zeppelin! What’s more, I liked the idea of perforating the whole thing with very fine slits, with lights which come to strike the canvas! This theme came quite naturally to me. “ And if you think that for a very young designer – and a French one at that – working for an Italian master, the pressure must have been on Nicolas’ shoulders, think again! “I didn’t feel any particular pressure. On the contrary ! There’s even more pressure when you have to design a Ferrari and there are senior designers all around you doing it with all their experience! Making a Citroën show car is much easier when you are a young designer! I was relatively relaxed on the subject. »

However, the Citroën Osée required a lot of self-sacrifice from Nicolas who sometimes felt a little lonely in front of his baby’s plaster model. “I was allowed to participate in the development of the scale 1 model. Everything went well but in fact, we only remember the good times. I’ve had other, more solitary moments in front of the car, because even if it’s a team effort, we’re still in a very competitive world. And incidentally, plaster is a rather heavy modelling technique. I remember wanting to position my “tapes” (black tape used to mark the lines on the model) that didn’t stick to the plaster! I think I participated in the creation of one of the last plaster models at Pininfarina, which had already partly moved on to Epowood, a much more modern resin for this type of work. I even think it was to be the last one. And somewhere, so much the better! »

As for the rumour that this showroom prototype was first designed for… General Motors, Nicolas Jardin sweeps it aside by saying that he had done similar work for Mitsubishi. For Nicolas, having designed the Osée with both the double chevron and the Pininfarina logo remains an important step in his career. “For me it was a dream come true. “ A dream that continues today as Nicolas Jardin has since given birth to other projects or concept cars. It will be to read in another volume of this collection “Concept-cars” …