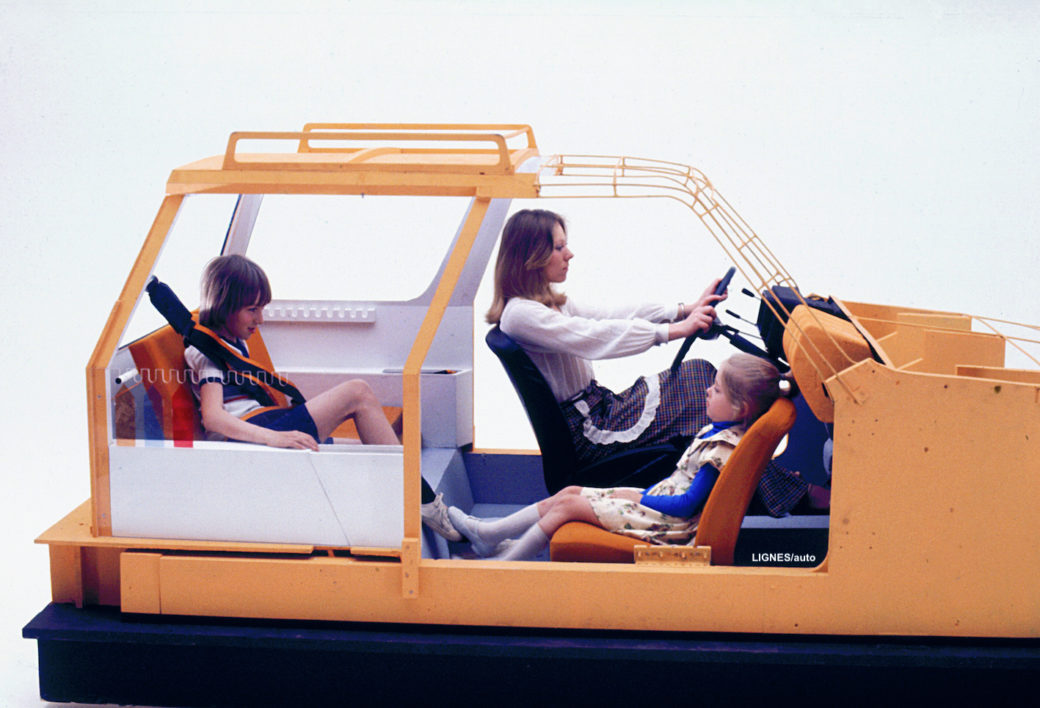 The Morphoz concept car has the code number Z36. It is therefore the 36th concept car since the launch of the series in 1990 with the Laguna roadster, during the era of Patrick le Quément. But before that, the manufacturer’s engineers and “stylists” studied numerous projects and innovations that have partly remained unheard of. Well, not quite as we will be able to judge here !

Morphoz can lengthen, Morphoz can shrink. And so, Morphoz has a modular cabin in its length. Damien Durand, the interior designer, took advantage of the opportunity to install a passenger seat that pivots to a position facing the road. The passenger seat is nice and allows the passenger to chat with the driver and, above all, with his or her two friends in the back seat…

Damien Durand, a very young designer, was not born in 1977 when in Rueil, on the presentation terrace of the Renault style centre, a model of the VBG project (Véhicule Bas de Gamme) signed by Robert Opron revealed his vision of what could have become an R2. Surprisingly, aboard the model, you can easily guess a model sitting with its back to the road, on the front passenger side.

It’s exactly the same architecture as on board Morphoz, except that in 2020, comfort is quite different: the mechanism that allows the seat to be tilted is fully automated. The seat is transformed into a backrest and the backrest into a seat. A mechanized blade retracts or releases the headrest, which has its own lighting and dedicated speakers.

It is therefore an architecture born at Renault long before Moprhoz. Robert Opron’s model was based on this theme, which was tested as early as 1975 on a “wire frame” structure designed to define the specifications of the VBG programme.

Here, the seat is manually tilted and, another original feature, the headrest acts as a door armrest when it is not positioned on the dashboard. This model also invents the sliding bench seat of the future Twingo, which goes even further with two completely independent seats.

Let’s leave the passenger compartment and come back to Morphoz’s concept of lengthening. Here, the added centimetres (20 at the front, the same at the rear) are dedicated in the front block to the integration through the floor of an additional 50 kWh battery, in addition to the 40 kWh integrated into the car. The pack is inserted from underneath after parking Morphoz on a charging platform dedicated to this operation. At the rear, the entire pack slides out, even driving part of the roof.

This idea was integrated into the Mégane concept car at the 1988 Paris Motor Show. It was not as developed, since only the hatchback window of the tailgate was sliding, making it possible to transform the car into two or three volumes and increasing the feeling of space. 32 years later, Morphoz pushed the concept much further, and for very different motivations (eco-mobility, integration into a new ecosystem, etc.) that we didn’t even suspect existed in 1988…

Finally, to conclude this subject, which is not exhaustive, let’s look at the wheelbase variation of the Morphoz. It goes from 2.73m on the City version to 2.93m on the Travel version. The possibility of modulating the wheelbase and therefore the length of a vehicle is, once again, nothing new. In 1992 at the Paris Motor Show, when Renault unveiled its Twingo, Matra introduced its all-electric Zoom city car, which flexes to the constraints of the city with a wheelbase that changes from 2.65m to 2.15m. The Zoom can then be parked perpendicular to the pavement.

View this INA archive to (re)discover the Zoom prototype : https://www.ina.fr/video/CAB92047610

Thanks to Jean-Marie Souquet for making available some of the documents published in this post. Find the Morphoz concept car and the history of Renault styling from the 1960s to 2020 in the 356-page book, “Concept-cars and Renault study prototypes”, (below) which will be published by BJB in early April. Subscription is still possible at the preferential rate of 70€ instead of 89€ here : http://lignesauto.fr/?p=15225