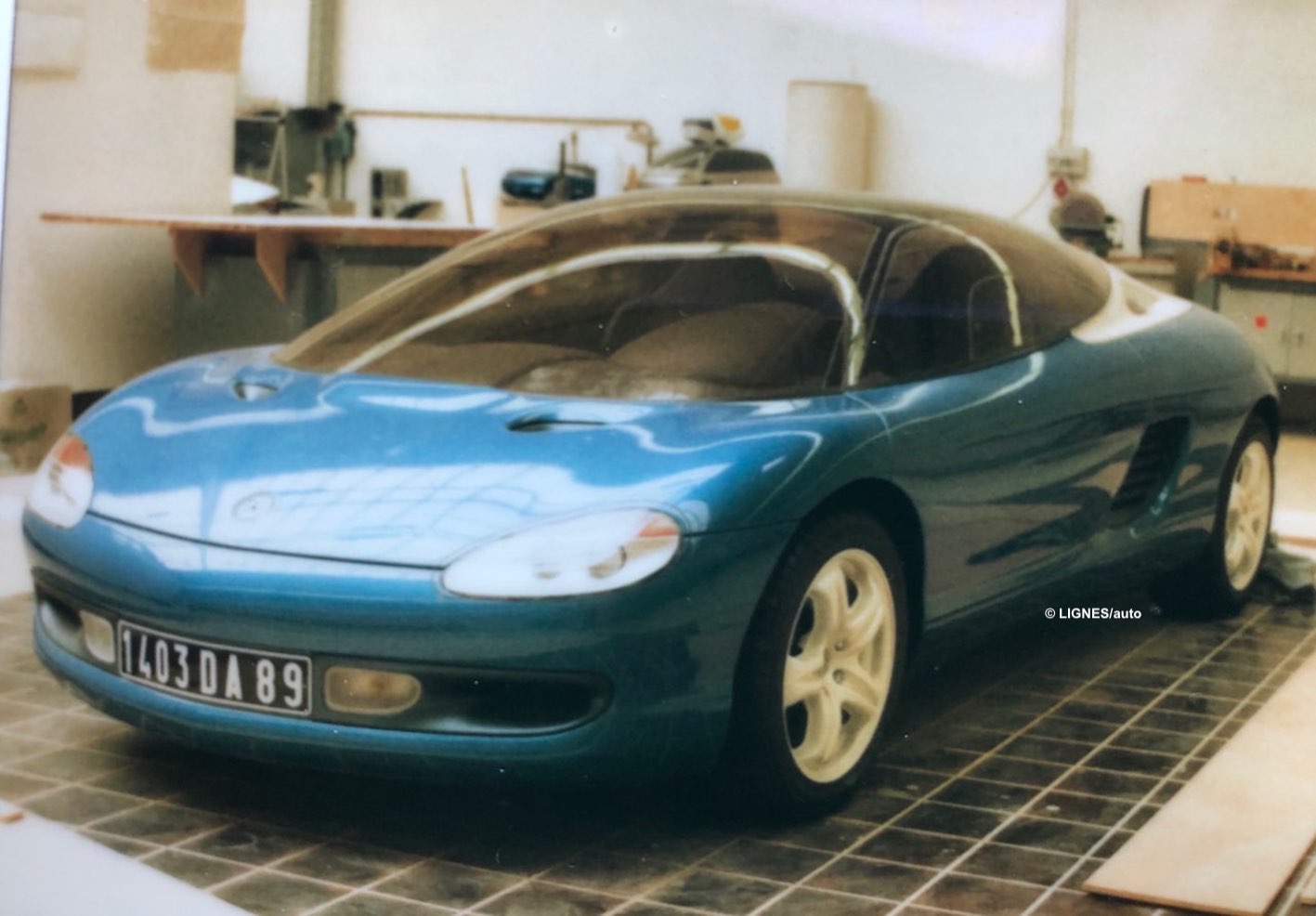 In 1989, the W71 program was launched to give birth to an Alpine berlinette. With previously unpublished documents, let’s retrace its journey at the Renault Design Centre, putting this project in its proper context.

This is a sentence full of meaning, taken from the many interviews conducted with Patrick Le Quément during the writing of the book “Concept-cars and prototypes of Renault studies“, available very soon (ah! the containment…). The head of Renault Industrial Design from 1988 to 2009 explains that “in my mind, the 1990 Laguna concept car was part of my campaign to revive Alpine. I failed to revive the brand. ” The Gaston-Juchet era had already broken its teeth with the NGA program in the mid-1970s…

As soon as it arrived – at the end of 1987 – Le Quément tried to help develop a new Alpine project, the W71, launched by the Berex design office in Dieppe to support the A610, which was still in its infancy. This new model should make it possible to create a coherent Alpine range. At the time, Renault’s design office was fragmented into different locations, including an entity located on rue du Port in Nanterre. It is headed by Jean-François Venet and is more specifically in charge of advanced projects. The specifications for the W71 arrive here. The team includes designers in short pants, such as Jean-Pierre Ploué, Hideky Nagashima, Michel Velay, Axel Breun and Ian Matthews.

Right next to this office, Jean-Paul Manceau is in charge of diversification design, because Renault is still designing trucks! In Manceau’s team, a designer by the name of Guy Greffier will surprisingly be the first to launch the stylistic study of the W71 programme. He is building a highly original model, with a front-mounted mass balance and a single-body volume. “This balance of mass with the cabin cell carried forward is characteristic of the current trend. Remember the Chrysler concept cars with the Cab Foward theme? ” explains Axel Breun.

Of course, one example is the Chrysler Lamborghini Portofino concept car (below) unveiled in September 1987 at the Frankfurt Motor Show, a year before Renault designers set to work. This Chrysler was designed on the platform of an elongated Lamborghini Jalpa and built at Coggiola in Italy, a year before the latter began to shape the concept car … 1988 Renault Mégane!

However, Axel Breun says he remembers that the late Guy Greffier drew his inspiration for his design of the W71 from a Japanese prototype, the Isuzu COA III, also from 1987. The latter would give the idea of a large glass roof over the passenger compartment, a roof that Greffier designed to perfection in a rather compact volume.

Behind this canopy, its model adopts an engine compartment topped with a white tinted volume of the most beautiful effect. Greffier’s berlinette is almost a one-body, luminous and yet it does not convince the design department.

As for Axel Breun, he had made his choice: “I thought Guy’s model was magnificent, but the problem with this concept was its reduced habitability and above all, a high beltline! On board, you felt trapped, and if today this type of confined passenger compartment like that of an Audi TT pleases you, it wasn’t the Renault design philosophy of the time, more open to the outside, with clear and luminous interiors. »

The glass roof in place of the pavilion will not make people laugh because “there was a real concern about feasibility with Guy’s model,” Axel adds. In 1989, Chrysler unveiled its Millenium Concept, a long sedan that also took up the concept of the Cab Foward, the advanced cab that was definitely chosen for the W71 program.

Axel Breun provides his own designs with an Alpine that takes up as many themes as possible from the Laguna concept car, then designed by Jean-Pierre Ploué. The Laguna will be unveiled in 1990.

After the rejection of Guy Greffier’s proposal, Axel Breun works in duet with Christophe Dupond on the W71. It is the style born by Christophe who is finally selected to bring the project to a second scale model.

The spirit of the Laguna concept car can be found in this project. “Its front end is very much inspired by the concept’s,” confirms Axel, “it was clearly the wish of Patrick le Quément, who loved the berlinette. His desire was to succeed, but as soon as people talked about Alpine at the time, politics got involved! We were not necessarily well seen with our Alpine badge projects… It was difficult, but every Alpine project was difficult, to the last one!“

In 1990, when the Laguna concept was revealed, a model of the W71’s habitability was produced, and you will discover it in the book on Renault concept cars, alongside the two models by Greffier and Dupond and … the first sketches of the first Renault Mégane. A Mégane that Axel Breun knows well: “Yes, because at the time of the W71 project, I was also working on the X64 programme for this first-generation Mégane. I arrived in October 1988 after having followed Le Quément from Volkswagen to Renault. At the time, I didn’t speak French but I was passionate about the Alpine project. I owned one and even drove one in my early days!”

“With Guy Greffier, our contacts were often based on illustration, an area he appreciated as much as I did. With Christophe Dupond, it was easier because he spoke perfect English. If he sometimes served me as a translator, he was also a serious rival on this project! And then there was also Jean-Pierre Ploué but he was very busy at that time with the X06 project for the Twingo… “

At the end of 1991, two prototypes were produced for test drives. The engine in the central rear position is that of the Renault 19 16-valve engine, while the running gears are also drawn from the bank of components of the Régie at the time. Designer Ian Matthews designed the interior of this new saloon. “The interior was simple, efficient and simply beautiful, with a lot of bodywork visible on the door panels or under the dashboard,” confirms Axel Breun.

The Alpine spirit was definitely there. However, Raymond Lévy, who passed the torch to Louis Schweitzer at the head of the Régie in 1992, did not validate this program. Le Quément then counted on Christian Contzen to relaunch a project, the W94, which gave birth to the Spider in 1995 on the technical basis of the W71. Once again, the first sketches were signed Alpine but the project was unveiled under the Renault Sport label. Exit Alpine.

It will be necessary to wait until 2017 for the true rebirth of Alpine after the projects Z11 of 2001, W16 of 2005 and W19 of 2007 (*) attempted this resurrection. The last word is to Axel Breun: “on the occasion of the development of one of the projects you mention, I took my team to Flins to see the two W71 prototypes kept by Renault Histoire. When I saw them again, I found them not too bad, but unfortunately at the time, all Renault projects were based on wheels that were far too small. That was a real problem for the designers, and our proposals suffered from that. Today, I still think that Guy Greffier’s model was magnificent, different. It’s a pity that this model didn’t come to fruition…“
(*) Projects to be previewed in the book “Renault concept cars and prototype studies” for which there is still time to subscribe here: http://lignesauto.fr/?p=17179.

Thanks to Axel Breun for his testimony and his availability.