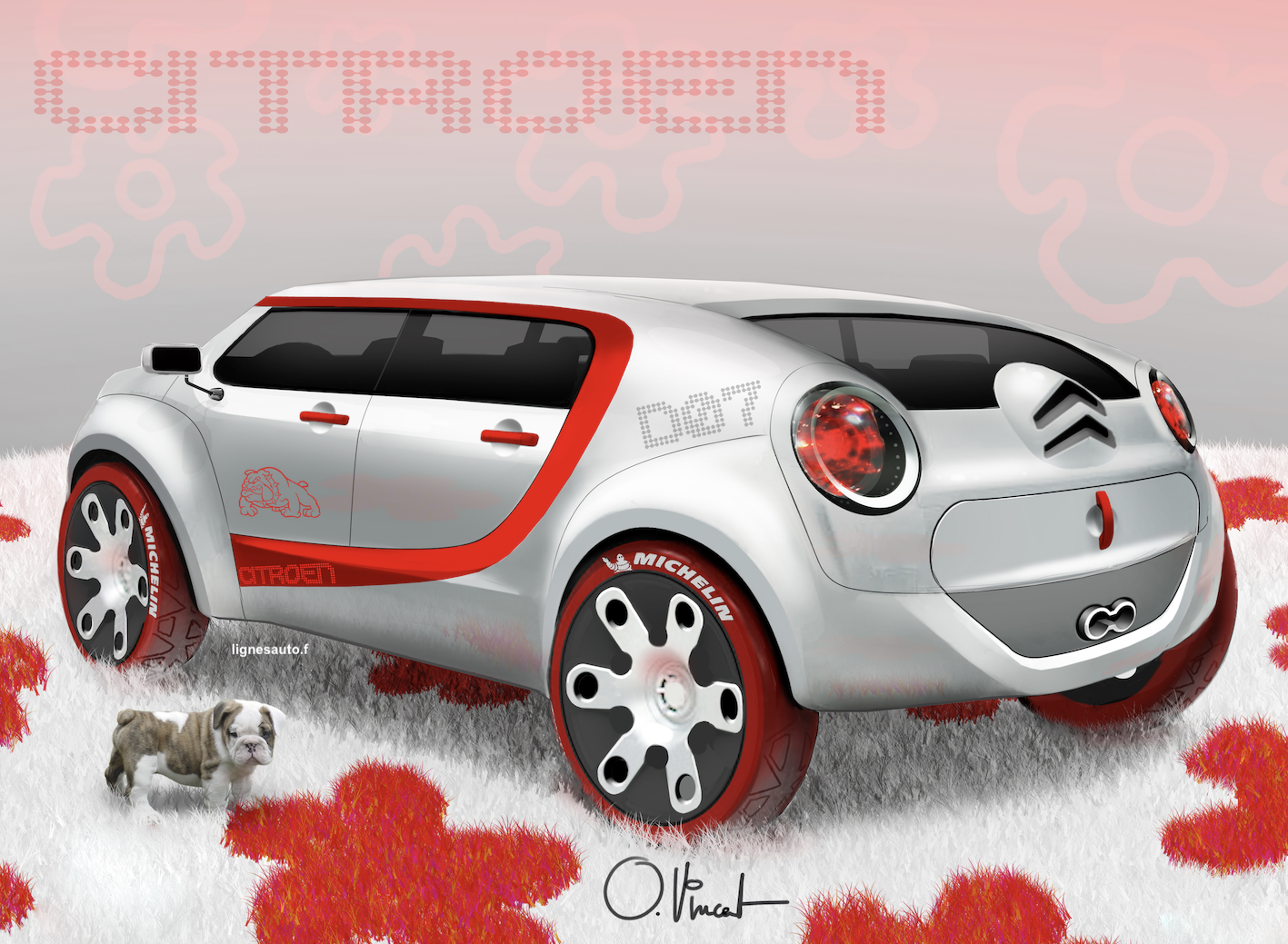 Citroën has just presented its compact sedan with SUV codes: the C4. In 2014, this same name will be used to describe the very famous C4-Cactus, born after a long process of studies carried out following the presentation, 13 years ago already, of one of the most emblematic concept cars of the brand: C-Cactus. Relive the special birth of this incredible concept car.

The year 2007 will remain engraved in the manufacturer’s history. At the Frankfurt Motor Show, Citroën presents C-Cactus, a futuristic vision of the green saloon. It breaks codes and engages style in a new dynamic.

Arthur Blakeslee, the boss of the Citroën style at the time, is dubious. In the early 1990s, designer Oleg Son warned him that one of his modelers was probably going to leave them for Audi to become a… designer, and it would be a shame to let him go. It was then that the man in question, Olivier Vincent below, who joined Citroën in 1991, tried his hand at it all.

“Little by little, during my years working as a model maker with Oleg Son, Jacques Blondel and Marc Pinson, I realised that I wanted to move on to the other side, to become a designer,” explains Olivier Vincent. “But the idea wasn’t well received by Arthur Blakeslee. I then took part in design competitions at Renault and Audi. At the latter, I came fifth in the competition, and this builder was ready to hire me after training. But she was unpaid and I couldn’t quit my job… I was finally able to present my work to Blakeslee who agreed to partially finance my studies at Strate College. I wanted to stay at Citroën, because I’m attached to this house. I have a great esteem, it means something to me this loyalty! “

After his two years of studies, Olivier Vincent is integrated into the design team by Jean-Pierre Ploué. He will work on the Tubik project – with Mark Lloyd – which is not yet the concept car of 2011 of course, but a sort of Audi A2, a rolling model of which is being produced in collaboration with the DRIA (Directorate of Research and Innovation and Advanced Technologies). Then he worked on the second generation C5. “Officially, after taking part in the phase advance, I drew the Tourer break silhouette and then the time for the Cactus arrived! »

When this program lands on the designers’ table, the idea is to design an economical, recyclable vehicle. This concept has marked the history of Citroën design. “We were very free at the start, we had to design a vehicle that was ecological, economical but above all very typical. In the competition between all the designers, I opted for an attractive and at the same time appropriate design.”

“I was inspired by a… bulldog because he is atypical in terms of morphology, we want to pet him because he is cute and at the same time mischievous. A bulldog is not necessarily very beautiful but it is easy to appropriate it. My proposals clearly came from the automotive world,” explains Olivier.

And the most beautiful comment comes from Jean-Pierre Ploué, very excited about the drawings, and who tells Olivier “that he could never have drawn that! “At the beginning, the drawings of Olivier Vincent – who will also sign the design of the Citroën DS4 – are on familiar terms with the world of the Hummer with a flat front end, a rather high on legs. And then there was this morphology of the bulldog that totally breaks with the very Zen side of the interior, given birth to by Cathal Loughnane. Like Olivier, Cathal is oriented towards the concept of an “essential” car. Essentially, the term is dropped. It is in the product marketing department that he was born under the direction of Vincent Besson.

He explains to the press that the C-Cactus concept car “is a new, attractive and ecological vision of the essential automobile, a new vision of the automobile, centred on essential values. It takes up the ambitious challenge of offering an eco-friendly saloon with attractive and fun styling, equipped with an HDi hybrid powertrain at the price of an entry-level C4. Around the backbone of our current range, we are willingly considering a downwardly shifted range, called “essential”, which would take up the C-Cactus concept and decline it at three different platform levels. ” Within the PSA Group, it’s a story that will lead to a complex project because to move from Olivier Vincent’s concept to the car we will know in 2014 (the Citroën Cactus), nothing will happen as planned.

First of all, it is impossible to develop the project on the mid-range platform as an “economic” reinforcement for the C4. Tilting onto the platform of the C3, C-Cactus, which is more than 4.20 m long, enters a kind of automotive no-man’s land, posing as an upper segment sedan despite its C3 underbelly. The stylistic development of the production car derived from his concept car (E3 project) will not, however, concern Olivier Vincent. Marc Pinson needs him on the C4 Picasso project and the E3 project falls into the hands of Frédéric Duvernier.

“The exercise of transposing C-Cactus to the E3 programme was perilous because the package was not appropriate. I had tried the operation before switching to the C4 Picasso project, but Jean-Pierre was not convinced.” The bulldog morphology of the concept car will therefore be abandoned in favour of a smoother, high-tech object.

An iPod on wheels that is being launched seven long years after the presentation of the C-Cactus concept in 2007. During the genesis of the latter, did Olivier Vincent think of the 2CV, another “essential” car from the French manufacturer? “No, but it is true that the spirit of the 2CV is there with its essential and humanistic side. In the graphics, the 2CV is very typical with its large wings. There are some similarities between the two.“

C-Cactus has opened up a new direction for Citroën, a path that the manufacturer has had difficulty clearing on an industrial level. But the enthusiasm was very real since a C-Cactus estate version (E32 project) was programmed. Maybe she could have done what only Friend 6 had done before her: sell better than the sedan!

Today, with the arrival of the C4 2020 above, the days of the C4 Cactus may be numbered. Nevertheless, it remains one of the French manufacturer’s most daring attempts to clear unexplored paths. Sometimes at your own risk!

Subject extracted from the book “Concept-cars and prototypes of Citroën studies” available on the BJB Editions website: https://www.bjbeditions.com/products/concept-cars-et-prototypes-detudes-citroen