It is an adventure that is above all a human adventure that has just been launched by WMH: Welter Meunier Historique. This association, created by former members of the WM and WR stables, is committed to rebuilding the WM70, one of the first competition berlinettes designed by Gérard Welter and Michel Meunier.

Gérard Welter – above and below the video – who died on January 31, 2018 after more than 40 years spent in the Peugeot style, is known to have created with his accomplice Michel Meunier, the WM structure that we see in the Le Mans 24 Hours from 1976.

On the legendary circuit, the WM and then WR cars have achieved some notable feats, such as fourth place overall in 1980 (below), pole position in 1995 and the 405 km/h record before the chicanes on the Hunaudières straight.

But before the Le Mans adventure, there was the great debut of the Welter-Meunier duo. A duo which, half a century ago, unveiled the WM P70 prototype (below) on June 21, 1970 in Montlhéry. If today the WMH association has chosen it as the first project to rehabilitate France’s automotive heritage, it is for its ultimate and pioneering technical character, with its composite monocoque concept and its minimal weight of 505 kg, as well as for its exceptional design which prefigured certain lines of the Peugeot of the 1980s, well before Gérard Welter (below) became the Style Director of the lion’s share of the brand.

Despite the absence of the original car, the members of WMH have carried out the reverse engineering of the prototype based on period documents and will start its manufacture with the help of partners. It is to them that the association is now turning in order to complete the panel and bring to fruition this work that respects a part of French automotive history. And a team of passionate people.

The aim is to take part in a first historic vehicle event as early as 2021 before continuing with a series of events and elegance contests with, as soon as possible, participation in the Tour Auto and Le Mans Classic, flagship events for which the car is eligible.

At the time, the WM P70 proto was a “sport prototype” Group 6, in class 7 of the 1150 – 1300 cc displacement. Before doing its first laps, it is presented by Gérard Welter and Michel Meunier on the terrace of the design and styling offices of La Garenne. We can see Paul Bouvot, then boss of the Peugeot style, which Welter will take over a few years later.

While the length of the WM P70 at 3.37 m remains within the norm, its height of only 86 centimetres is a real feat for a vehicle on the road and, what’s more, a competition vehicle. Let’s recall that the same year, in 1970, Marcello Gandini unveiled the Stratos Zero, a concept car known to be the lowest ever designed. Yet it did no better than the WM P70!

The structure of the WM P70 is unprecedented for its time with a square tube frame containing all the mechanical anchoring points as well as the hoops and safety brackets, integrated in a sandwich of polystyrene foam reinforced with laminate. Carbon was not known at the time, but this solution was avant-garde.

The engine is in the central position. It is a 4-cylinder in-line engine derived from that of the Peugeot 304, placed in a transverse position and cantilevered on the rear axle.

In 1970, the WM P70 took part in the Tour de France where, despite its small displacement, it finished 35th (below the WM P70 and its prize list).

WMH is currently in an active search phase for technical and financial partners who will enable it to manufacture the prototype.

It’s not just a question of rebuilding the WM P70, it’s also a question of paying tribute to Michel Meunier and Gérard Welter for the whole team of volunteers who followed WM (then WR), particularly during the 24 Hours of Le Mans. Welter, just a few hours before his death, was already talking about this project.

There are partners, patrons and enthusiasts who have – also – a heart beyond their passion for cars. If you are one of them, the contact for information or help with the reconstruction of the WM P70 is here: Jean-Christophe Bolle-Reddat: persoWMH@gmail.com.
So that in 2021 we can say: “Gerard, Michel: they did it!”

Long before the production of the first WMs, Gérard had the idea of producing his own car. Not even twenty years old and already his head full of projects. This very first car conceived, designed and produced individually by Gérard Welter dates back to his early years at Peugeot.

“I was earning a misery at Peugeot, it wasn’t really a big deal but I didn’t really care. I was happy, I wanted to build my car in such an atmosphere. So I stuck to it: drawings, chassis tube, everything was made with my own hands. This car had some very interesting features. Technically, it inherited the rear axle and engine of the Renault Dauphine which I had reversed to benefit from a central engine architecture. The front drive train also came from the Renault. I had put a double-shaft cylinder head on the front end which I was proud of. As for the polyester bodywork, it was moulded on a plaster form in my parents’ garden”. 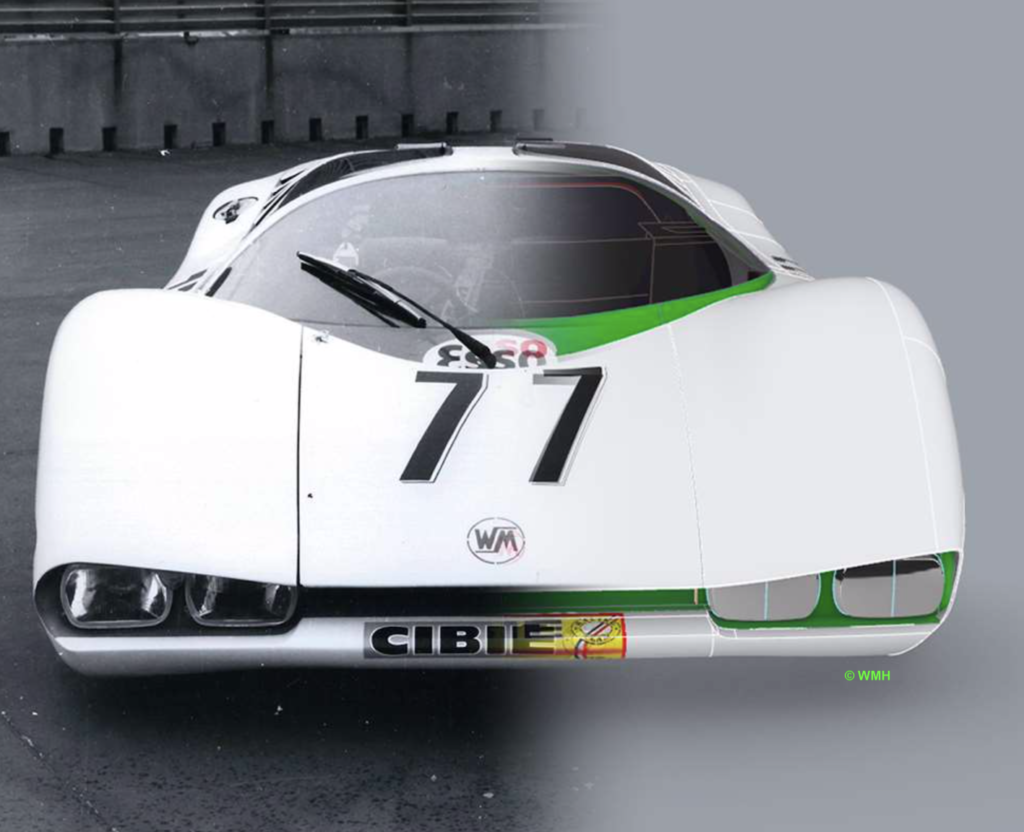