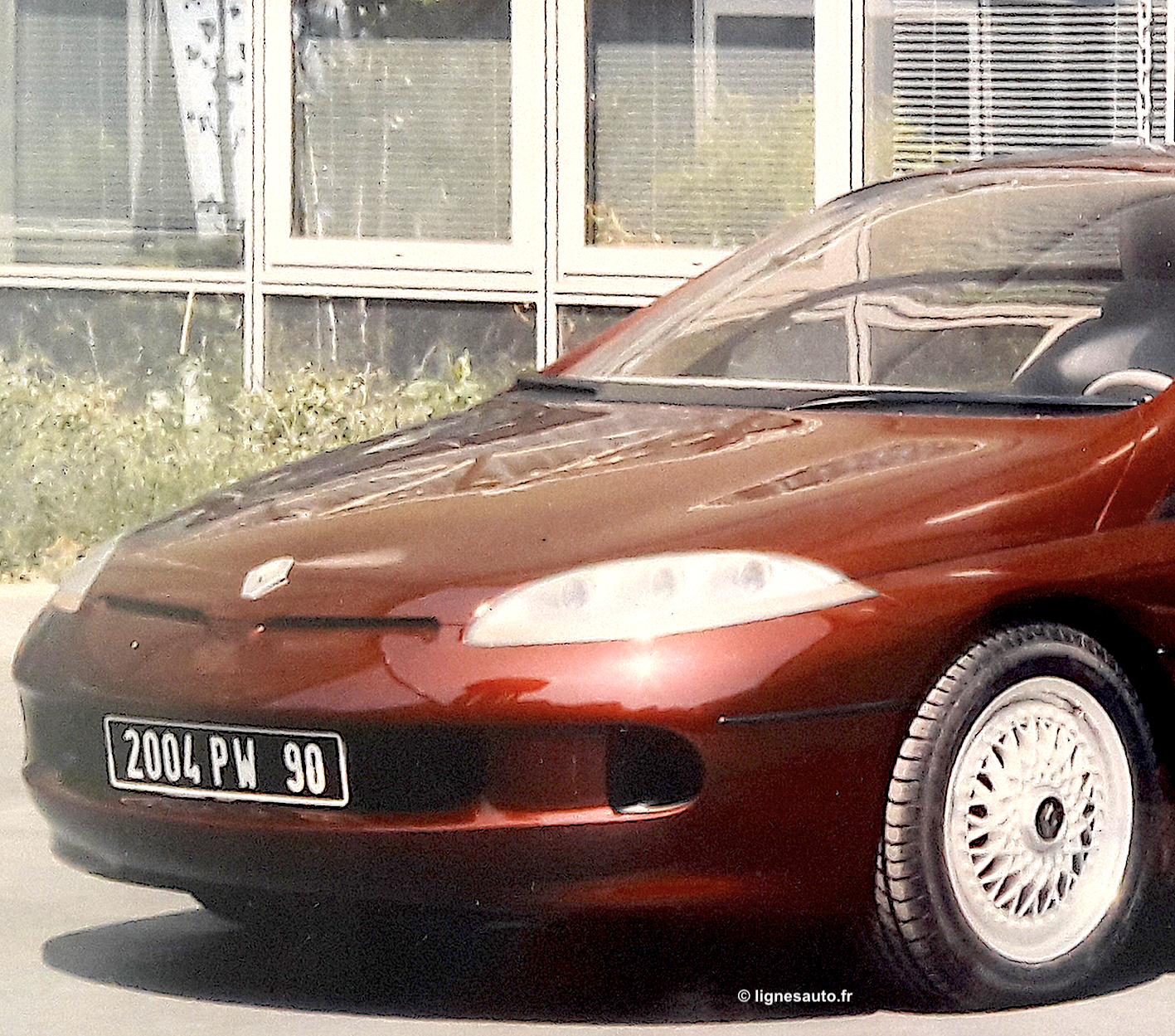 In 1990, when the above W67 project was brought to the 1/1 scale stage, the Renault style became Renault Industrial Design, with Patrick le Quément at the helm and the French manufacturer’s range is still quite disparate. There are two recent new models (Renault 19 of 1988 and Renault 21 of 1986) whose design is by Giorgetto Giugiaro of Ital Design. The great novelty of this year 1990, is the Renault Clio (below) which replaces the Supercinq and which arrives in front of the still lively Peugeot 205.

Behind the scenes, there is no shortage of work. The Twingo project is well under way, having been tested in complete confidentiality with an almost definitive model of… the Clio, below, in 1988, two years before the Clio was launched, four years before the Twingo was unveiled!

But that’s not all: Patrick le Quément has launched a great offensive with his first three concept cars which should give Renault back its taste for innovation. The passion is embodied by the Laguna roadster in 1, (1990), the family is concerned by the innovative Scénic (1991) in 2, and the escape is expressed in the very singular lines of the Racoon (1993) in 3.

With this trilogy and the arrival of the Clio, which was born in-house at Renault, Renault Industrial Design clearly marks its ambitions. The Clio designed by the in-house stylists has been put into competition with Giugiaro’s proposal below for a long time. But this will be the last programme studied by the Italian, the Quément putting an end to external consultations.

For all that, nothing is forgotten in the world of design, and the very famous Medusa sedan unveiled by Giugiaro in 1980 marked quite a few people at Renault, starting with the bosses of the time, notably Bernard Hanon.

Ten years later, Renault takes up one of the aesthetic themes of this long saloon with the W67 project designed in partnership with Matra for the interior architecture.

This one offers four luxurious seats with four comfortable armchairs positioned very low (we are not yet talking about SUVs in 1990!). Access on board is through two large butterfly doors, an architecture dear to Michel Jardin and, of course, to the… Giugiaro!

Giorgetto Giugiaro presented his Gabbiano concept car based on the Renault 11 to Renault in 1983. A gesture in the form of a “gift” to Renault, the manufacturer having then chosen the Italian’s stylistic proposal for its R21 project (below). It was the same, two years later, for the R19!

Nothing is lost, of course, but it is indeed a Renault designer who designed the large W67 sedan with two wide butterfly doors: Jean-Pierre Ploué. We find in these lines the flexibility of the front inspired by the concept cars Megane (1988) and Laguna (1990) below, both born from the French designer.

At Matra, a “wire frame” model of the W67 project gives a good idea of the exceptional habitability of this saloon, which adopts a very modern “shooting brake” volume, with a very generous glazed area.

This architecture was already worked on at Renault in the mid-1970s with Robert Broyer’s R14 coupé. This coupé, scheduled to go on sale in September 1977, also proposed the theme of four comfortable seats. However, this project was abandoned.

The Renault – Matra W67 was more likely to be at the top of the range. Two years later, the Renault Safrane arrived on the market with the new logo, and this W67 could have accompanied it with an innovative concept. The two cars, Safrane and W67, were to be supported by the second generation Espace (1991-1997).