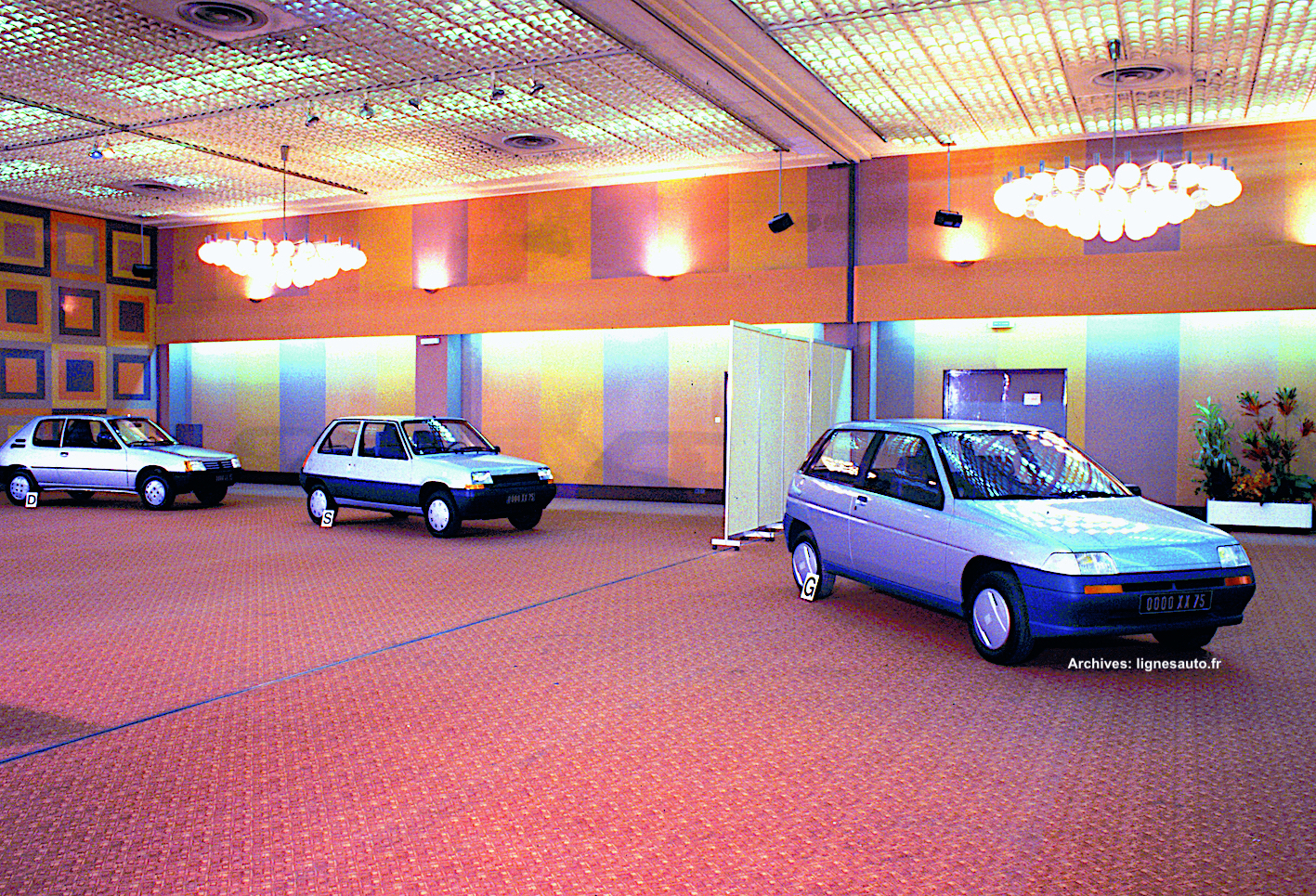 The life of the Renault design office from the mid-1970s to the end of the last century is full of many projects that never saw the light of day. Here are a few of them, in the form of snapshots (almost) forgotten fragments of the history of Renault’s style…

Above and below, the famous VBG project (Low-Range Vehicles) is detailed in the latest book on the history of the Renault design office from the 1960s to 2020 (on order here: https://www.bjbeditions.com/collections/les-beaux-livres ). It began in the mid-1970s and ended up with a model that would give life to the Twingo. Here we are in 1975, the Renault 5 is only three years old and Renault is already thinking of placing a much more modern vehicle at its side, with a three-cylinder engine and exceptional habitability.

This program gave birth to more than forty models 1/1 and its dimensions have continued to grow and decrease. The first models above anticipated the concept that Fiat marketed much later (in 1980) under the name of Panda…

In 1977, the date of the above model, Robert Opron, former head of Citroën style, joined the Renault design department two years earlier. He imagined an original coupé based on the Renault 5. Its glass surfaces are oblong and generous. This project was never followed up.

The above project came to an end, but not with this design. This is the 1981 Renault 9, which is being studied as the X-42 project. It has seen many more or less daring styles, notably by Marcello Gandini, and others less classic than the one finally chosen. Like this one, which came from the in-house style office.

The X-29 programme for the renewal of the Renault 30 (which gave birth to the Renault 25 in 1984) was fine-tuned at length. At the end of 1979, in Lyon, a gigantic test took place (above) with a proposal by Marcello Gandini in the foreground, and in the background, a hatchback version by Gaston Juchet. It is the latter that will be chosen and then modified to give birth to the final product. One can also guess the presence of an Audi 100 and a Peugeot 505.

During the genesis of the Renault 25, at the very beginning of the 1980s (above), Marcello Gandini dared to interpret the famous “satellites” of controls that appeared on the Citroën CX in 1974 and Visa in 1978. As on the Citroën, the steering wheel is single-spoke, while the instrumentation is in the form of four horizontal bars. The project was refused, but Gandini still signed the dashboard for the R25.

Above, we thought it was a presentation of the future Supercinq in front of the 205. Which, in view of the dates, doesn’t fit, as Sylvain pointed out to us in his comments, taking the book I wrote here… a long time ago: “50 years of small and secret Renault!”. This is the next stage, the genesis of the Clio 1 with Giugiaro’s proposal for this sedan from 1990 which will not be retained. The Italian will know how to make sure that his proposal is accepted by… Fiat for his Punto.

We’re doing a good time since we’re at the very beginning of the genesis of the Renault VelSatis programme. On the “official” photo above, we discover that the clay model of the future VelSatis of series production tries to appropriate the codes of the eponymous concept car which then celebrates the 100 years of the brand… But the choice to move towards a high car concept – a choice imposed by the product to the detriment of the design – makes the task complicated!

Still the same programme, on the same day, the reverse side of the photo unveils the project supported by the Design of a Low Car, a project that will not be retained . This story is detailed in the book Concept-cars Renault (see link above).