1969 : Man has just walked on the moon and thus breaks the utopian dreams of an American car industry stuck in cars covered with excessive fins. This highlights the richness of Latin creativity. Giorgetto Giugiaro then surfs on two passions : from that of fine arts, he then switches to that of car design….

Rather gifted, the young man was then hired at the prestigious Bertone carrozzeria in 1959 (below, Nuccio Bertone and the drawing of Giugiaro’s Testudo). He’s only 21 years old.

In 1965, when the passengers of the Blue Planet were finally dry thanks to Léon-Claude Duhamel who had just created the K-Way, Giugiaro carried out his (beautiful) weapons at the Italian body shop and then gave up his position as director of the Stile to…. Marcello Gandini. The transition from the YéYé years (1960) to those that marked the end of the glorious thirty years (1970) saw Giorgetto Giugiaro set up his own company for the creation of car style, which later became Italdesign (now in Audi’s hands), while keeping his passion for painting deep within him. At the end of the 1960s, when Giugiaro left the controls of the Bertone studio, a remote duel was to take place with the other genius of Italian creation : Marcello Gandini, a rather secret and reserved man, unlike Giugiaro.

These two will turn the automotive world upside down in a world cut to the waist, with their works, each more fascinating than the next. The driver then drives in vehicles without seat belts, without laminated windscreens, on roads where the speed is still free, for some time to come. In France, it is the Renault 4, the Peugeot 404, but also the Renault 16 and the Peugeot 204 that furnish urban traffic jams.

Because we must remind our young generation that, no, we did not have a mobile phone at that time, but that, yes, we already had traffic jams. Citroën, for its part, is industrializing its GS Birotor and SM, both with mechanical that will push the company to lose its independence. But as Mother Grand said, that’s another story.

In short, the car enthusiast’s smile is at half-mast. There’s not much fun in the automotive world. Fortunately, our two geniuses will make him smile again; it must shine, and with Gandini’s Lamborghini Marzal (below), the passionate individual will be dazzled in the literal sense of the word in 1967. Marcello moves up a gear and gets out of the frame. The Marzal is first and foremost a silver-coloured interior that splashes the retina. It is then a hallucinating glass surface, particularly in the doors with “seagull wings” opening. It is finally a wedge-shaped volume simply announcing the lines of the Lamborghini Espada which will follow shortly afterwards.

A year later in 1968, when the Renault 4s shamelessly display their underwear and burn in Paris on cobblestones that have never finally hidden a beach, Marcello Gandini confirms in Italy his new stylistic orientation with his monolithic Alfa Romeo 33 Carabo. Funny bug that stings the ego of rival Giorgetto.

Giorgetto Giugiaro is also relying on an Alfa Romeo platform to counter Gandini. It gives birth to the Caimano concept, a two-seater coupé built on the base of a rust-free Alfasud, which is therefore quite rare. Even the rims adopt, in their centre, a straight design (a design that will inspire those of the future Alpine A310 V6).

In 1970, Bertone’s Stratos Zero – designed by Gandini – broke all the codes and placed the Italian master in the firmament of creativity at the beginning of this decade (below).

The machine is a corner without a door, without a hood, without glass. Is it still an automobile ? You access it through the windshield and you don’t get on board, you fall down. Giugiaro responds to his neighbour (both of them work a few kilometres apart in Turin) in 1971 with his Boomerang concept.

Designed on the basis of a Maserati Bora, the Boomerang pushes the limits of the inclination of its windscreen to only 13°, a feat for the time, which allows it not to exceed one meter in height. On board, Giugiaro is ahead of his rival with a very innovative dashboard architecture. All the instrumentation is grouped inside the steering wheel hub, freeing the dashboard from any information. This festival is a delight for automobile hedonists.

Giugiaro could have taken a decisive advantage in this duel with his concept car Tapiro designed on the basis of a Porsche 914/6 with an engine in the central rear position. This sharply designed coupé was unveiled at the Turin Motor Show in 1970. The Tapiro is only a modernised interpretation of the De Tomaso Mangusta (1967) road that Giugiaro sketched during his visit to the Ghia body shop. The rear fenders lift up one block and act as a cover to access the mechanics and thus singularize those of the Mangusta.

This prototype was sold in the late 1970s to a Spanish industrialist whose workers did not really appreciate the methods. The VW-Porsche Tapiro dreamed of burning the boards of car shows. Her dream came true in Spain, she burned… under the wrath of the workers.

Giugiaro then entered a prosperous period of collaboration with major car manufacturers ; he signed the Alfasud for Alfa Romeo at the same time as he collaborated with Citroën for the GS (the two cars have such similar styles, architecture and mechanics. Strange, no ?) And then it will be the VW Golf, the Delta and so many others…

Gandini, on the other hand, is looking to become a unique consultant for a major manufacturer. He had to wait until the very late 1970s to achieve his ambition with Renault, for which he designed many projects, from the AE Magnum truck to the Supercinq.

These two geniuses, born in the same year (1938), did not have – and will never have – any equivalents in the world of automotive design. They formed, in spite of themselves, a very different duo, not in their approach to the profession, which combined both style and automotive architecture, but in the way they communicated. They fought a battle in which the teenagers of the time were pretty collateral victims by becoming for some… car designers. Just for that : thank you, Mr Marcello Gandini and Mr Giorgetto Giugiaro. 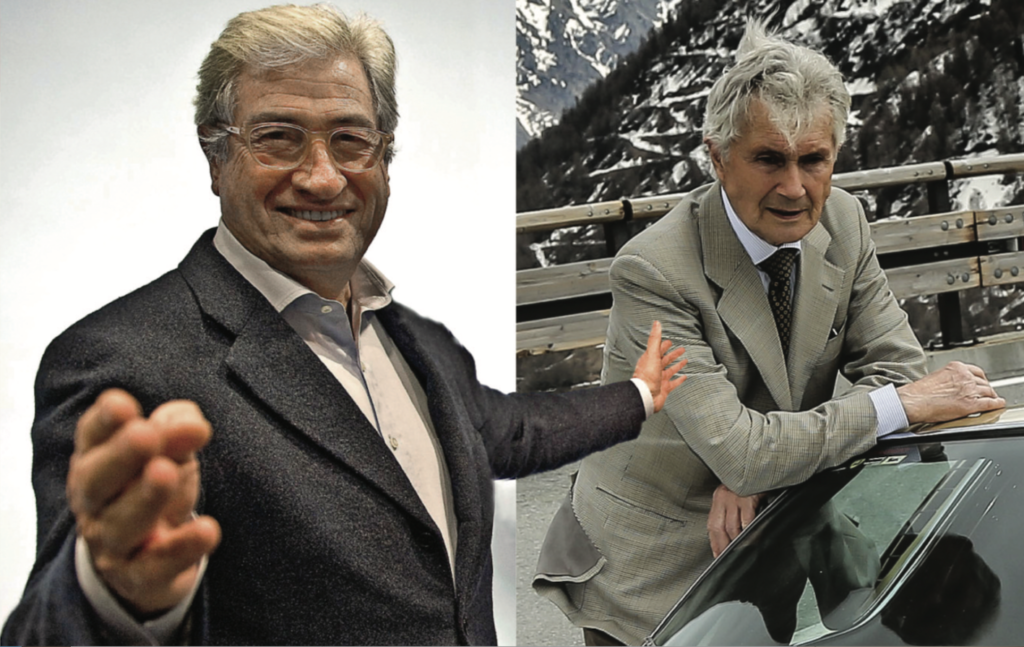