PSA Group sales in China are disappointing. However, the DS brand has chosen China as its base of conquest. What will happen tomorrow ?

Passionate about the DS brand, its design, its audacity in terms of colours and materials and its product plan to the six new products (two of which are already known), reacted to the PSA Group’s poor figures on the Chinese market. China must be the foundation of the new French brand and the next big sedan will be built there. So inevitably, in the current difficult context, questions arise. By talking about the facts, and only the facts, we try to answer them….

The Chinese market has deteriorated considerably over the past two years. For the PSA group as a whole, the outlook is pessimistic. The two “joint ventures” ( the Dongfeng – DCPA joint ventures for Peugeot and Citroën – and Chang’An – CAPSA for DS -) recorded free falling sales, growing from over 700,000 units in 2014 to only 250,000 in 2018. And the first half of 2019 unfortunately confirms this trend. Unfortunately, PSA is not the only one responsible for this state, since with its new products – DS but also Peugeot with its 508 L and 4008, and Citroën with its C3 and C5 Aircross – the group has strengthened its offer.

And among these models, the next large DS sedan is due to be released in 2020 and will be produced only in China. It is in the Shenzhen factory below, located in the south of the country not far from Hong Kong, that it is already being created on the pre-production lines. The objectives of 200,000 DS vehicles produced each year by this plant (maximum capacity announced in 2013 at the time of the site’s inauguration) were seriously cooled in 2018. And even totally showered at the beginning of 2019.

Carlos Tavares, head of the French group, replied last March to our colleague Jean-Michel Normand (Le Monde) to these results in these terms : “We have a joint venture with Dongfeng (DCPA/Peugeot-Citroën) that operates at 50-50, it’s complicated. There is an inconsistent slowness in decision-making“. It is probably necessary to imagine the same context for CAPSA (DS). China no longer seems to be the El Dorado promised in the early 2010’s.

So much so that the Reuter agency believes, according to an internal source, that the French group would consider an outright withdrawal from the country ! We don’t dare to believe in this end, even though we have only recently experienced an identical situation with the withdrawal of the Infiniti brand from the European market. But it has already conquered many other territories, unlike the DS brand. However, it must be admitted – to put it mildly – that when the “X83” project for the large DS sedan was launched, almost all the visionaries were on the side of the largest country in East Asia.

Designed on the EMP2 platform, and more precisely on the sizing of the Chinese Peugeot 508 L, the DS “X83” must become the standard of this famous Chinese factory, a site that was organized by PSA based on the operation of the Rennes plant in particular. Its two shoeing lines accommodate the PSA Group’s two “high-end” platforms : the former BVH2 of the first DS5, and the new EMP2 of this next large sedan “X83”. It was therefore logical that this product, with production volumes necessarily more contained than those of an SUV, should be entirely manufactured on this Chinese site. The beautiful one should logically be unveiled in the coming weeks, before the end of the year. Unless…..

In this context of gloom, we must therefore ask the right questions. Here are six of them :

1-What could become the DS brand ?
The “French luxury” advocated by DS appeals to people outside our borders. But rather than counter German manufacturers who are generally uncontrollable with their own “blue-white-red” DNA, is it not better to assign DS a more reasonable roadmap, similar to the one Volvo has followed, for example. Volvo, acquired by the Chinese Geely in 2010, has succeeded tremendously in its transformation and now has seven modern products (finally not so far from the six announced by DS…), products developed in 10 years. In its current range of three SUVs, two estate cars (we exclude the old generation V40…) and two sedans, Volvo also offers four plug-in hybrid models. Volvo broke its record in 2018 with 642,253 units sold. It took him more than eight years to achieve this first objective. However, the DS brand was born five years ago….

2-Does the large DS “X83” sedan come at the right time ?
We all – journalists, brand lovers, potential customers – wanted this great sedan, but the current extremely unfavourable context prompts us to ask this question. As we have seen, when the “X83” program was launched, the Chinese market was open for such a sedan, offering a royal habitability at rank 2, the one that is primarily looked at by this clientele different from that of Europe. But given the alarming figures of PSA’s presence in China, it is necessary to prioritize launches with high profitability and the urgency is to be able to count on an attractive product and above all, with significant sales volumes. This product exists (see question 4) and unfortunately it is not the big sedan…. Last April, Carlos Tavares described the situation of the PSA group in China as “unacceptable“. Five months later, is it still wise for the DS brand in search of volumes to unveil a large sedan, certainly representative of “French luxury”, but which remains a product primarily designed for the Chinese market ? For the Chinese market in the early 2010….

3-Can PSA repatriate the production of the big DS to Europe ?
Europe must market this great DS from 2020. It will be imported from China. With DS’ alarmist sales figures on the Chinese market, it is legitimate to ask the question. The industrial answer is “yes”, PSA could repatriate production to Europe. And even easily, because the EMP2 platform on which it is based is a base whose production is perfectly controlled in France, notably in Sochaux and Rennes. But the Chinese site in Shenzhen has surrounded itself with many partners who would probably not welcome this change in industrial strategy. In view of the repatriation of the production of the “X83” to Europe, the costs of this transfer should be compared to the gains made following the abandonment of export taxes from China to Europe.

4-Can the DS brand change its presentation strategy ?
Of the six models officially announced by the DS brand, two of them were unveiled and marketed : the DS7 Crossback and the DS3 Crossback. Among the projects in progress, in addition to the large sedan, we know that a compact SUV – which today will be called DS4 Crossback – has reached the end of its genesis and should reach the market in 2021. This new product is obviously a strategic element in the DS offer. Much more than the large sedan, whose volumes will necessarily be smaller. Can DS then reverse the pace of its presentations, anticipating that of this famous compact SUV ? It is indeed eagerly awaited by the car dealerships, which currently relies on only two models. It will compete with the heart of the SUV market, which includes the Peugeot 3008, Nissan Qashqai, Renault Kadjar, Volkswagen Tiguan, etc. It would therefore be necessary to postpone the presentation of the large sedan by a few months to let the media coverage of this compact SUV take off. It would be quite a bold move to do so. The adaptability of the PSA group and the speed to make strategic changes is a dynamic perfectly mastered by the French PSA group, then….

5-Does the presentation of the DS4 Crossback before the presentation of the big sedan make it a dangerous operation ?
The hypothesis, unlikely given the delays, that the DS brand would strike people with its “surprise” DS4 Crossback at the end of this year, before the presentation of the large sedan, would be reminiscent of a precedent in the PSA group. A previous one that had negative effects on the “delayed” car: the switch operated by Citroën in the early 2000s between the C6 large sedan and C4 compact programmes (below). The development of the latter was accelerated so that the C4 could be presented and marketed in 2004, one year before the big C6 sedan. The latter, with its style frozen before that of the C4, has also lost its freshness, especially indoors.

Nevertheless, today’s manufacturers’ communication does not hesitate to intelligently sprinkle information and photos on models with distant marketing. One of those that comes to mind is the BMW iNext SUV, unveiled just one year ago as a concept car, and now photographed by the manufacturer himself in his production plant (discover it below and here : http://lignesauto.fr/?p=12415) It is thus beginning to establish itself in the world of tomorrow’s cars, even though this vehicle will not be on the market until 2021. This is precisely the date on which the DS4 Crossback should be introduced. So, yes, unveiling the future DS4 Crossback at the end of this year would make sense. A photo where you can see its volumes in watermark (at the same time as the presentation of the “X83” ?) would certainly be a great demonstration that DS believes in its future and is proud to talk about it and, why not, block sales from the competition with customers ready to wait for this compact SUV !

6-What are the spaces for DS to manœuvre to ensure its future ?
As we have seen, on the product side, the brand has given itself the means to achieve its ambitions. Its preferred market, where it was born when the CAPSA joint venture was presented in 2011, was to be China. The profound changes in this market have had a very significant impact on sales, but also on the brand’s short and medium-term strategy. As China is clearly no longer the expected base, towards which countries can the very young brand turn to ensure volumes capable of ensuring its sustainability ? Europe ? Yes, as long as you urgently need high-volume products, which is not the case with the large sedan. So couldn’t the brand join Peugeot to venture into the American market ? “India to Citroën, the United States to Peugeot and China to DS”. Here is what was clearly announced by the French group last February. But in the face of the displacement of “commercial tectonic plates”, the question may legitimately arise…. And what was this surprise DS7 Crossback doing in the States earlier this year ? (photo from the CITROËNVIE website!)

Useful precisions : the Chinese market was a market with double-digit growth since the 2000s. The context for PSA’s establishment with new plants, and in particular the one dedicated to “DS”, was therefore favourable. Except that against all expectations and forecasts, the market started to fall in 2018 (-2.8%), which had not happened since the early 1990s. The same was true in the first half of this year with -12.3%. In parallel with this decline, PSA did not succeed in taking off despite the launch of new products…. Also note: joint ventures will no longer be mandatory in 2022 for VPs (50/50 association with a Chinese group until 2022 to set up in China). BMW has thus increased from 50 to 75% in its association with Brilliance. Last thing that is not specified in the subject: the DS Store in Paris has just closed its doors… 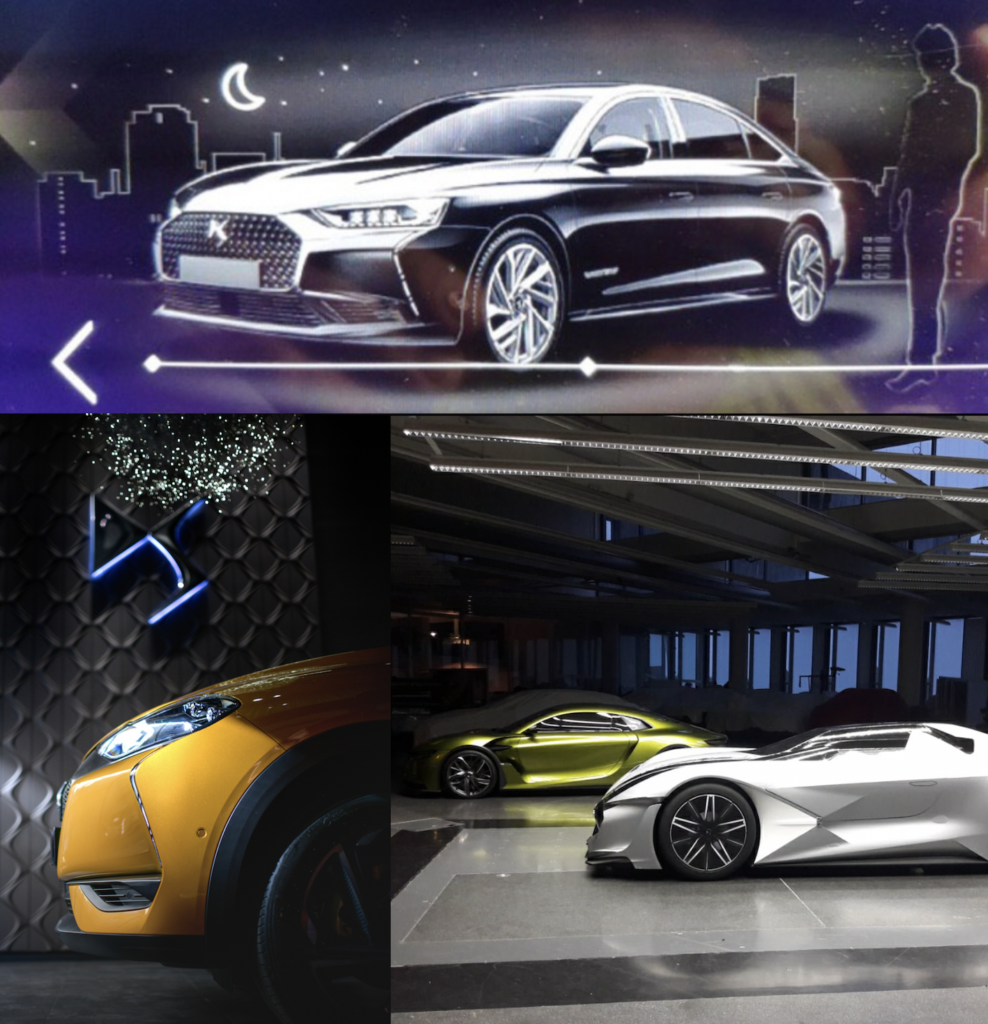