When you get the chance to meet a master bodybuilder like Paul Bracq and he tells you about “his” BMW Turbo that you’ve driven in another life, it’s great. Let’s open this exciting archive together!

1972, an important year for the French automotive industry, that of mass production! In January, Renault unveiled its attractive R5 designed by Michel Boué and commissioned by Bernard Hanon, the future head of the Régie. The 1968 crisis and social events have given young people an irresistible desire for freedom.

But it’s also the last fireworks display of mostly Italian dream cars before the oil crisis. The end ? Well, not quite… In 1972, the master bodybuilder-stylist Paul Bracq, after having masterfully made his weapons – and in a masterly way! – at Mercedes, and after a short stay in France at Brissonneau and Lotz, arrives at BMW where he will in a very short time generate a new identity for the Bavarian firm. The apotheosis of his stay in Munich remains without doubt his dream car BMW Turbo.

“The trend in the 1970s was to design or engineer safe cars. So BMW had to respect this new trend,” confirms Paul Bracq during an interview at his home in Bordeaux. “And then there was the event of the construction of the Olympic Park for the 1972 Games. This stadium was built on the old aerodrome that BMW used to test these aircraft engines between the two wars! Here too, BMW had to celebrate the Olympic event in its own way! The sales director at the time, the famous Bob Lutz, asked me to design a sports car with as much safety technology as possible and of course a Turbo engine, because we were about to release the 2002 Turbo.”

Safety is a natural part of the concept car design process. Here, Paul Bracq reinterprets Marcello Gandini’s idea and the fluorescent rings adorning the bow and stern of his Carabo. “I’m an aviation enthusiast,” says Paul Bracq, “and when I worked at Brissonneau and Lotz, I was able to go to the nearby military base. That’s where I got five kilos of fluorescent orange paint, which was then applied to the wing tips of planes for safety. That’s how I got the idea to paint the Turbo with that color!”

The Turbo is also and above all a typical corner volume of those years. It is also “butterfly” doors opening onto a cabin treated with particular attention to the level of habitability that its designer wanted to be superior to that of Italian dream cars. This ambition was met with dignity by this rolling prototype which has the particularity of offering a speedometer with horizontal display. Paul Bracq added a green-coloured instrument panel, which was very fashionable at the time, as was the presence of multiple dials, both on the console and to the driver’s left, controlling the various functions of the Turbo.

The first prototype of the Turbo was made by Michelotti. “Giovanni Michelotti was a charming, adorable Italian and an extraordinary bodybuilder,” recalls Paul Bracq. “I had an agreement with him to make the Turbo on condition that he would make the prototype strictly according to the plans and drawings I brought him. I used to go to his house every week in Orbassano where I cut the front of my Turbo, which originally had an overhanging overhang that was a bit too protruding.” The Turbo gave life to a new identity at BMW which was later taken over by Giugiaro’s M1 in 1978 and the 8 Series coupe of 1989.

“Faced with the less subtle approach of Mercedes, we opposed with this concept car a lighter, more airy, slender power. A car is a rolling sculpture. The Turbo is the culmination of a dream because I always tried to create a modern 327 Roadster when I worked at BMW. When I see the Turbo again, it’s always a great pleasure for me. I created this car from scratch, from the front bumper to the rear bumper. I even designed the wheels. At the time, we only had six months to come up with a vehicle that was in working order and we succeeded. It was the first concept car in BMW history.”

A concept car, no doubt, but one so desirable that many blank cheques were received by BMW from enthusiasts seduced by the futuristic machine. A second prototype was then planned and built the following year. This is the one that illustrates the subject. “The second study was to perpetuate the initial idea but with an emphasis on safety. I wanted to make it absolutely certain that we could get out of the car in the event of a rollover, so I modified the opening of the side windows.” There are also and above all the appearance of flanges on the rear wheels. “It was to get closer to the BMW 327,” Paul Bracq laughs. “We also modified the tint by darkening the central parts to highlight the two safety rings.”

The Turbo marks a new trend, as Paul Bracq points out: “When I designed the Turbo, Giugiaro advocated cubic shapes. I was more interested in fluid volumes. I was right because cubic shapes are less resistant to the wear and tear of time.“

Below, the scale model of the third BMW Turbo imagined with a new engine… V12 ! Its wheelbase is significantly lengthened as a result.

PAUL BRACQ: A LONG CAREER IN A FEW WORDS

Born in Bordeaux in 1933, Paul Bracq was awarded first prize in sculpture at the age of 20 at the Boulle school. With the stylist Charbonneau, he designed advertising vehicles before crossing the Rhine and becoming head of the “Advanced Style Studies” department at Mercedes for a decade, from 1957 to 1967.

He then returns to France and until the end of the 1970s, works at the body shop Brissonneau and Lotz where he will participate in the study of the Turbo-train and a BMW prototype … Already! From 1970 to 1974, he returned to Germany to work for BMW where, in addition to the Turbo prototype, he designed the 3 Series, 6 Series coupé and 7 Series sedan.

In 1974, he crossed the Rhine again and became responsible for interior styling at Peugeot until his professional retirement… and remained very active. In 2020, he celebrates his sixty-seven years in a profession that he has never ceased to promote in the pure tradition of master bodybuilders. Respect – and fascination – for this life which takes the form of a perpetual work…

Thanks to my partner in Bordeaux that day, Christian Martin. 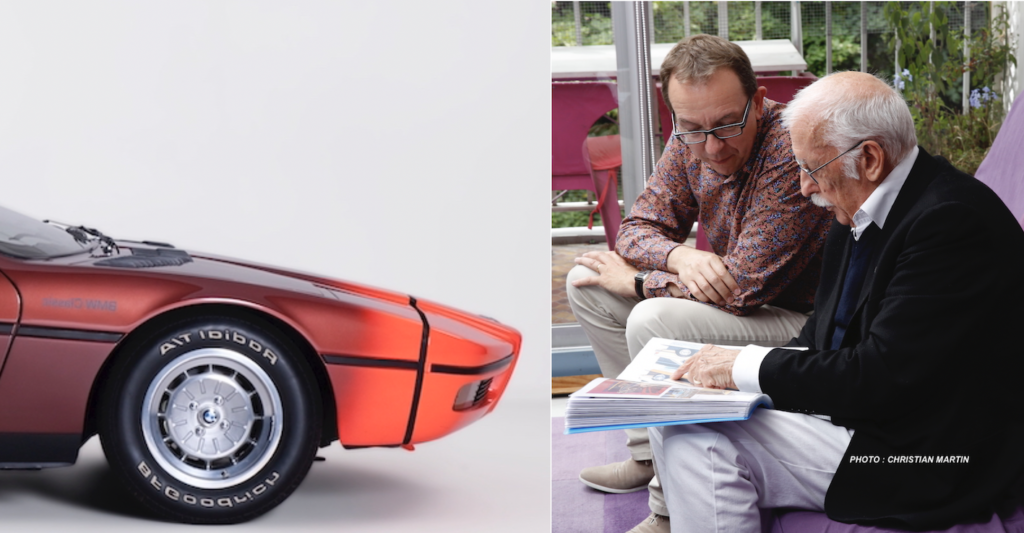