In the heart of the 1970s, when the SM coupé was nearing the end of its life, Guy Ligier asked Citroën to offer him a coupé capable of replacing it on the lines of his small factory. Why not a mini-SM based on the GS?

In 1974, it is far from that beautiful year 1970 which saw the birth, one after the other, of the sumptuous Grand Touring Coupe SM and the compact sedan GS. With the oil crisis which hit the automobile world hard in 1973, the impact was considerable for the Citroën SM and its inefficient Maserati V6 engine. Sales collapsed and production was partly relocated to Guy Ligier’s workshops in the Allier, before being definitively stopped in 1975 after only 12,920 units had been produced.

For Ligier, who is barely recovering from the poor success (sweet euphemism) of his JS2 coupé with a Maserati V6 engine, the pill is hard to accept. He absolutely has to find a Citroën model capable of taking the place of the GT coupé on the chains of his small factory. His survival is at stake. He then contacted the French manufacturer’s style boss who, at the beginning of the 1970s, was working on the DS renewal project, nothing less. Between Robert Opron and Guy Ligier, the tide immediately turned. Not only was the project of interest to the French manufacturer, but it was fully handled in the brand new workshops in Vélizy, where the design office had just set up shop.

Between June 1973 and the beginning of 1974, the designers of Robert Opron’s team worked on the subject. The “l’Aventure Peugeot Citroën DS” archives have drawings from the period signed by Régis Gromik and Jean Giret. These include variants of the coupé, but also of the cabriolet and even a beach car. Let’s not forget that the Méhari had been marketed six years earlier and that the idea of finding a more ambitious successor is in the pipeline! For this “official” GS Ligier coupé programme (we write “official”, because shortly afterwards, another GS Ligier coupé, this time designed by Marc Deschamps, will try to see the light of day, below), we can guess that the style teams have a free hand and only take over the GS sedan platform.

For the rest, everything else is new! We are thinking of installing under the bonnet the rotary piston block that the manufacturer will market in 1973. The car finally chosen at the beginning of 1974 was a slender coupé with a truncated rear end, very aerodynamic of course as Robert Opron wished.

The latter evoked this project in the following terms: “It is a study I made with Jean Giret. It was indeed the time when Guy Ligier was looking for another model to produce. He had just missed his model with Frua and he was looking for a Citroën base at all costs to make his installations profitable. The single brush proves that this study was carried out in phase with the genesis of the “L”. This project dates back to 20 February 1974 and there is not much to add… »

The semi-recessed headlights, however, and the long rear side window is split in two, allowing a small downshift to ventilate the two passengers comfortably in the rear. The grille inaugurates the spirit of the bumper, which will be repeated four years later on the small Visa sedan, while the windshield is an almost perfect copy of the CX’s windshield, which is not yet on the market. The front bumper is integrated to the grille and the whole thing benefits from shock absorbers in order to meet American standards. Because Citroën plans to be able to market this silhouette on the US market.

But when you want to create a new model from scratch, the investments get carried away. Parallel to this project, Ligier began to turn towards competition with the future project of competing in the Formula 1 World Championship in 1976. Robert Opron was only a few months away from his painful separation from Citroën to join Renault. The GS coupé for Ligier will thus remain in the state of a model, without ever having gone beyond this stage, whereas it would have been easy to build a prototype running on an existing technical platform. It’s all the more a pity that from the beginning of the 1970s, when Citroën revealed the GS saloon, Pierre Bercot, the CEO let his style teams work on a little brother of the SM based on this new GS.

Robert Opron and his team then set themselves the challenge of industrialising a GS coupé. In addition to the Ligier project with its new body seen here, the style offers several variants of the GS coupe that are much less costly to industrialize since they take over a large part of the sedan’s body. Suggestions mainly concern the two-door side panel only.

Michel Harmand will break all the codes as usual to propose a sporty, racy three-seater with driver in the centre. But also (above) a more classic concept If you look at the black and white photo of the GS Ligier coupé below, you will notice that the stylists have pinned on the wall of the model studio the three-dimensional plans of the Matra Simca Bagheera presented one year before the model was made. But there will be no GS coupé… 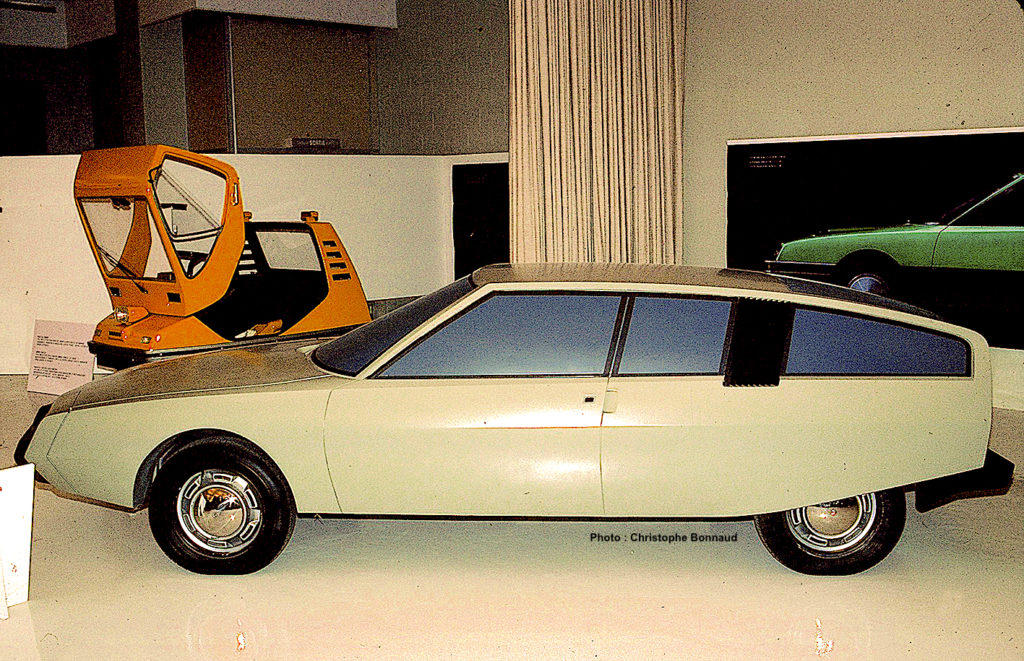