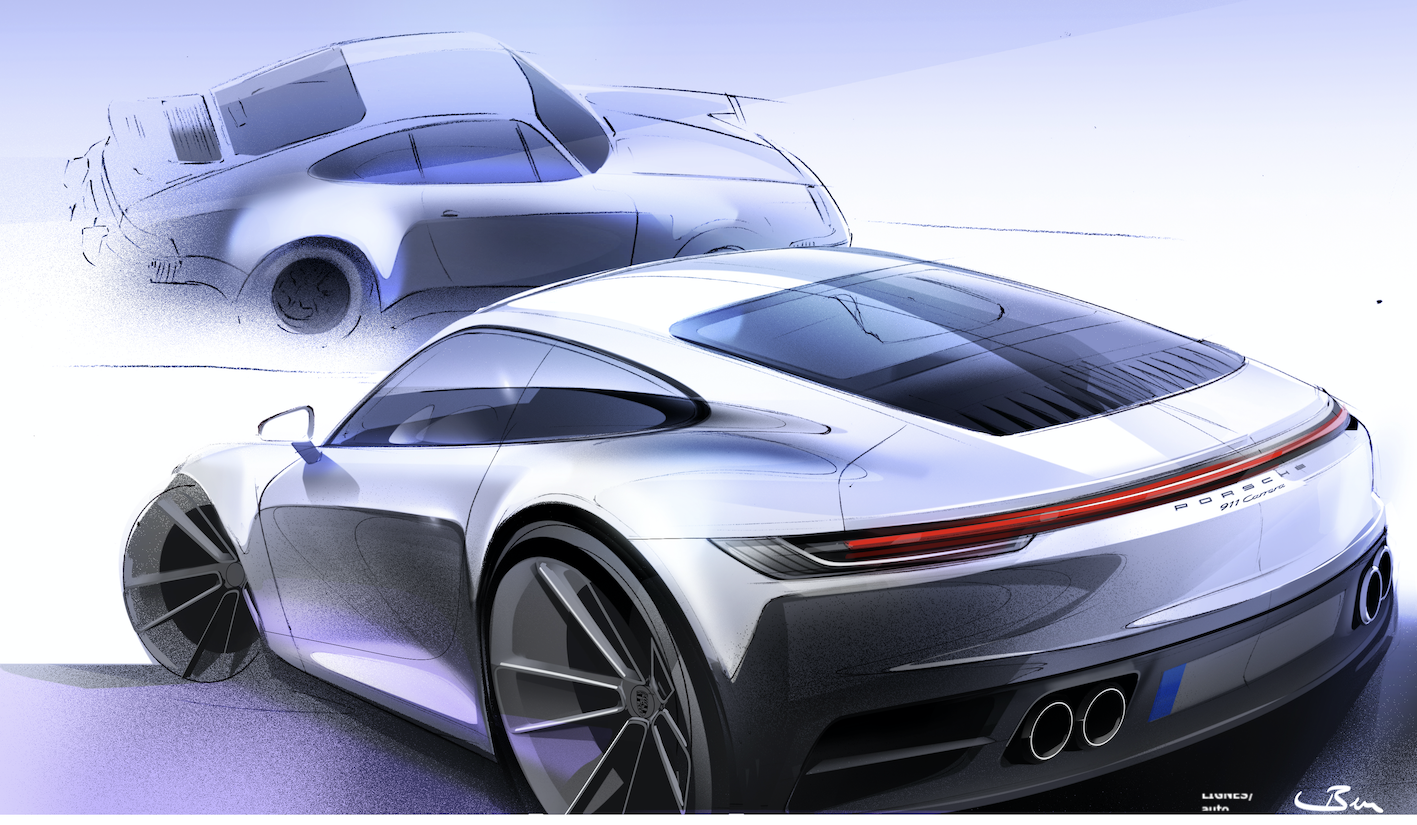 Interviews conducted by the Porsche-Media “Newsroom”

When the Porsche 911 type 992 was launched at the beginning of the year, Porsche gave a voice to the designers of this myth, which seems increasingly complex to develop, aesthetically speaking…

Since 1963, the design of the 911 has enjoyed an emblematic status. How did you develop this eighth generation ?

Peter Varga (1), external designer of the 911: “The 911 embodies a unique form language. The silhouette speaks for itself: everyone recognizes it immediately. Our first task was therefore to identify the proportions we wanted to change. We have widened the front as well as the back.”

“The central part, the passenger compartment, has been kept as compact as possible. At the same time, we have increased the size of the rear wheels by one inch. It is the rear part that has been the most fascinating to design, especially for the search for an optimal aero. The 911 needs a lot of support force on the rear axle and we also wanted to further improve the drag coefficient. These requirements, combined with the more elegant and harmonious roof line, were a major challenge.”

Ivo van Hulten (2), interior designer of the 911:
“When designing the new 911, it was also very important to take into account the evolutionary changes of all previous generations. In the original 911, for example, the interior had a strong horizontal character. With the new 911, we are focusing on new materials and a return to horizontal architecture. We have integrated a larger touch screen (10.9 inches) into the central display. Its functions are organized more simply than in the previous model, which means it can be used more quickly and with less risk of distraction.”

Is it difficult to reinterpret an iconic car like the 911 ?

P.V.: “You must respect the icon, but fear would have an inhibiting effect on our work. After all, our job as designers is to be creative and think innovatively. But of course, we had to take into account the history of the 911 ! It is precisely this combination that makes the Porsche brand and the 911 in particular so special.”

How long does it take to develop a Porsche from the initial idea to the prototype stage ?

V.H.: “The period lasts about four years. As designers, we are involved in the overall development process at an early stage. We must be able to see and touch the models in order to make the final adjustments. But we also use digital tools that make our work much faster and more efficient than before. For example, we use virtual reality headsets to examine important data. These 3D data, which are continuously improved, form a basis that will later be used to manufacture the car in Zuffenhausen.”

Has the increasing level of digitization had a significant impact on your work ?

P.V.: “Digital tools accelerate all stages of the design process and make them more flexible. They allow us to put complex surfaces on the car into practice, exactly as they have been digitally planned. That being said, the design of the 911 is so special that its surfaces have only been definitively defined on a 1:1 physical model.”

Is there anything about the new 911 that you’re rather proud of ?

V.H.: “For me, it’s his instrument cluster. It shows a good balance between analog and digital. The analog tachometer in the middle completes the digital group with its five counters that no longer overlap.”

P.V.: “I am delighted with the rear lights materialized in a single strip. This purist approach adds the finishing touch to the sleek and clearly structured design of this new 911.”

(1) Born in Hungary in 1978, Peter Varga studied transport design at the University of Pforzheim. In 2014, he joined Porsche as an external designer. It emphasizes function, simplicity. He is not in favour of radical changes in design that would change the identity of the 911. He attaches particular importance to maintaining the balance between the three key elements of the 911: performance, form and ease of daily use.

(2) Ivo van Hulten was born in 1977 in Waalwijk (Netherlands). His studies at the Design Academy Eindhoven paved the way for him at Audi, then at Opel, where he was chief designer. In 2014, he joined Zuffenhausen and has since been responsible for Porsche interior design. Its plans for the future are to ensure a balance between the analog and digital worlds.