This is an unloved Porsche: the 914. We at LIGNES/auto love it! So when Michael Mauer, the head of Porsche design, talks about this “entry-level” model in terms of style, we listen, read and share!

Ferdinand Alexander Porsche and his team were responsible for the design of the 914. The final design for the series was developed by Heinrich Klie, one of his most important collaborators. A man whom Ferry Porsche’s eldest son trusted when he took over design responsibility in his father’s company. Although the start of development dates back to August 1966, Porsche’s historical archive contains older drafts entitled: “914, Model 1, August 1964, design: Heinrich Klie”.

These documents describe the development of the car as a process in which the management largely left the designers free rein. The major modifications were finally discussed only after the first 1:5 scale models were presented. For Ferdinand Alexander Porsche, the way forward was clear: “The 914 has always been a completely independent design that has also been a design success“.

Michael Mauer has been in charge of Porsche design since 2004, making him the third design manager after Ferdinand Alexander Porsche. Here he talks about the proximity of the first project to the legendary 550 Spyder model, the design process then and now, and the development of the Porsche brand identity.

Michael Mauer: “The influence of the 550 Spyder is evident in the very first model dating from 1964. I immediately questioned the specifications, the basic orientation. For an entry-level Porsche, the concept of the 912 – a four-cylinder 911 – could have been developed further. So why did you go back to the mid-engine concept? The inspiration for the 550 is obvious. As a designer, I understand it. Because the car was more compact, more agile. Minimalist, purist. Using that as a starting point for the study makes perfect sense to me.”

From the concept of the Spyder 550 to the Porsche 914, it was an evolution that led to a completely new model in 1969?
M.M.: “For me, on closer inspection, it’s not even a formal evolution. The models clearly show that the 914 had no real predecessor. The various drafts, some of which are very different, show the search for a concept around the 550 theme. It was a high-tech car in its time, certainly a real racing car. The first project in 1964 was followed by a real evolution, which took a completely different direction. It was in fact much more elegant, much less sporty. We are no longer in the theme of a “small, sporty, purist” machine. This difference – in my opinion – relatively strong, shows that research was open at the time. With the five models from 1964 to 1967, the design process for the 914 shows a deliberate search to support the 911. The basic set was established, but the formal features were still very different at the beginning. In chronological order, we started with “something like the 550,” and then the discussion obviously went in another direction.”

We seem to have gone from a successor to the 550 Spyder for the 1970s to a very different project?
M.M. : “Completely different! You can already see it in the second model, which I find sensational. This one seems almost American-inspired and then we come to Klie’s one. It looks clean, neat. That’s why I’m surprised that the May 1966 project was also created by F. A. Porsche, because it doesn’t really correspond to his design philosophy. If we look at the first model from 1964, and compare it with the development two years later, it doesn’t have at all the characteristics or appeal of the basic concept of the 550. The result is comparable to the evolution from the 356 to the 911. The July 1966 version is very different. At that time, in my opinion, they made the right decision and went for the much more modern model.”

How to explain these very different themes for the same project?
M.M. : “Designers working on the same project end up talking to each other! To compare with our current methods, this phase is similar to the development of the Panamera. At the time, we knew what we wanted, the concept was there and we proposed two variants. And as you can see from the 914 studies, people are working side by side. They inspire each other, they influence each other in their work. You end up looking at the proposals and saying, yes, I like that. And you build that into the final model.”

The 914 is a true mid-engine Porsche. Even though it looks very different from the 911. Are elements such as the Targa roll bar a way to formally demonstrate a family connection?
M.M: “A mid-engined sports car is indeed typically Porsche. The 356 “No.1″ is a mid-engine car. This had to be changed in favour of mass production capacity. In this context, the idea of Ferry Porsche is understandable. The mid-engine is the right concept for an entry into the range. The Targa was created in response to safety issues and new US regulations. In fact, a minimal roof is all you can get with an open, reduced, minimalist concept, inspired by the 550, or maybe also the Speedster. The way was clear for the 914. We ourselves had already found a good solution to combine driving pleasure with respect to American standards. The final design is characteristic of the style philosophy under the direction of Ferdinand Alexander Porsche. This commonality almost automatically led to the creation of a brand identity. Although this was certainly not the original intention.”

Does a basic concept like this set the course for design?
M.M. “That’s how I’ve always seen the Porsche design, until today. First of all, we ask ourselves what would be the best concept. Here, it was the entry-level, compact, sporty one. At the end of the day, what do I really need if I want to enjoy driving? A mid-engine car, of course. And then the transfer of formal features is a logical step. Creating a car with particularly attractive proportions due to the position of the engine. It must be said that the 914 has typical mid-engine proportions. I don’t know if there was anything comparable, especially at the time.”

A question about the timing: the first model dates back to 1964, but the 914 was not available on the market until 1969. Not very fast compared to the current calendar !?
M.M.: “With the new 911, which we presented at the end of 2018, it took about four years from the very first sketch to the market. But the 914 project was completely new. It was launched around 1964, and it was launched in 1969, five years. That’s pretty impressive for those days! Details such as the front end, especially the headlights, were discussed at length. Twin or single headlights, that was the question. Especially if you remember how things were back then. Such concepts in the mid-1960s were pretty crazy. The 911 had single round headlights, but was the cheapest car supposed to have such optics? It didn’t make sense, but it showed that the designs were already state of the art!”

After testing the shape creaser, the 914 came out with fairly prominent wings…
M.M.: “This was in line with Porsche’s philosophy inherited from the 911, which is that the driver can ideally position the car with the help of the marked vision of the wings. If you’re driving on a mountainous road in 911, that’s a real help. In many other sports cars, all you can see is the windshield, not the front end of the car. These distinctive fenders allow you to orient yourself while sitting in the car. This is also the case with a 914. I don’t know if the issue of brand identity was already playing a role at that point. Probably didn’t.”

The 914 has an excellent Cx value: 0.37. Without complex computer simulations. Doesn’t current technology limit the influence of human perception?
M.M.: “Despite all the simulations and modern technology, I believe that our creativity is not limited. Just like in the 1960s. Of course, the teams of that time had a basic understanding of what works well or not at all aerodynamically. If you look at the rather abrupt shape of the 914, it’s a response to the search for an extremely modern shape. The result is certainly no coincidence, because there were enough people in the company who knew from the start what worked and what didn’t work. And all this without today’s simulation methods!”

In the old days, engineers were also designers. How does it work today? M.M. “If you want to achieve certain things, you can’t make them happen without a solid basic knowledge. Because without that, we designers couldn’t argue with engineers if there was any doubt.”

What do you personally think of the design of the 914?
M.M.: “I have to admit that I’m still a bit reticent about this car, but for me, the performance of the time outweighs everything. And then there are details like the headlights, which are superb. Or the door handles, integrated in a minimalist way. Which was completely new for Porsche. I find it fascinating to see how Ferdinand Alexander Porsche and his team managed to introduce this modern, compact style, similar to the transition from the 356 to the 911. That’s exactly what I’m fighting for today. It’s a reduced and purist approach, without one line too many! I still find the 914 surprising, but that opinion can change when you look at it more closely. I obviously wasn’t involved in this program! But I stand by my first impression: I think the car is still incredibly modern!”

YOU WILL ALSO LIKE : MAUER TALKS ABOUT THE 100% ELECTRIC TAYCAN : 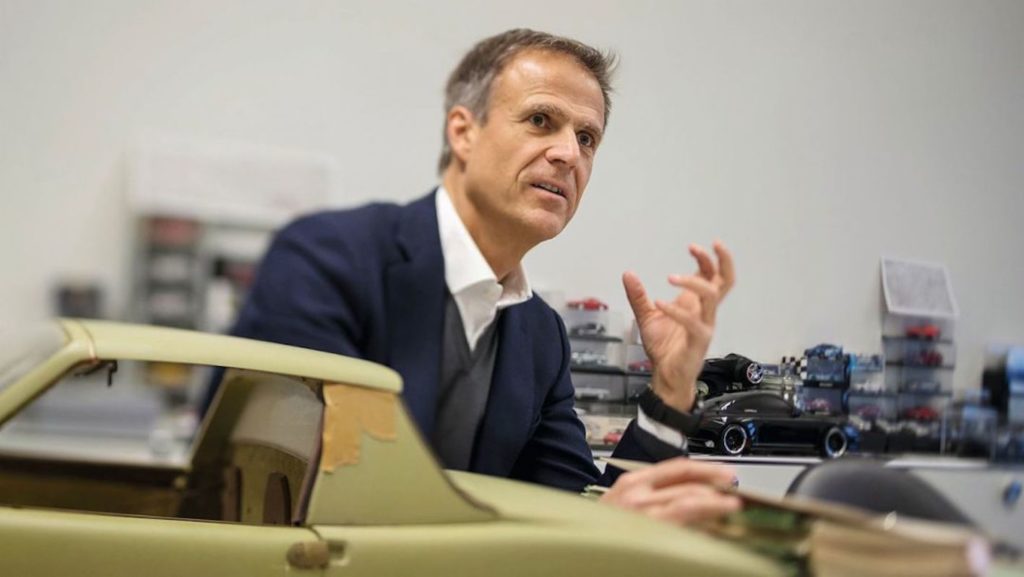