For lovers of the brand, the 1999 C6 Lignage concept car remains a milestone in the history of Citroën design. It owes its style to Marc Pinson, who was also responsible for the production of the production vehicle.

Marc joined the Citroën style in 1992, and at that time he was more oriented towards interior design. “I stayed there for five or six years because I felt that the job of interior designer was more interesting and formative, because it was more complex!” he told us when he wrote the book “Citroën concept cars and prototype studies” (available here: https://www.bjbeditions.com/products/concept-cars-et-prototypes-detudes-citroen ).

This designer, who learned a lot – like others – from Michel Harmand, began his period as an external designer with the project of a limousine that was a legitimate descendant of the great Citroën sedan of 1955! We met him again on Tuesday 30 June 2020 in the Paris suburbs where the new C4 and ë-C4 were unveiled, this time with his cap as project style management manager. And, as expected from this designer, who is as efficient as he is discreet, “you’ll note that the design work on the C4 is the work of an entire team! »

First of all, Cyril Pietton, in charge of the exterior styling, has been with PSA for almost 20 years. Cyril comes from the ESDI school and initially oriented his career towards Italy (Pininfarina, Maggiora and Fiat) before joining the PSA group in 2001. On the concept car side, we owe him the adorable little C-Airplay (above) made with Christophe Cayrol for the interior design.

The interior of the C4 (above) was followed by Jean-Arthur Madelaine-Advenier, responsible for the design, colors & trims as well as everything to do with the driver and passenger interfaces. After these presentations, Marc Pinson gave a professional deciphering of the C4’s style.

Marc, what was the initial briefing for Citroën’s return to the most complicated segment in Europe?
Marc Pinson: “We had to reinvent the style codes for this silhouette. Here we are in a highly standardised segment, whereas in the other segments, customers have had the pleasure of discovering new concepts or hybridizations that have transformed the automotive landscape. In the compact sedan segment, until the arrival of our new C4, customers found, with rare exceptions, highly standardized products as well.”

Yet you started from the “small” CMP platform…
M.P.: “The CMP is not a small platform, it was also designed for this ‘C’ segment. It was chosen from the outset of the project because it offers three structural elements of the C4’s design. It offers us record-breaking interior space, large wheels and, of course, electrification, three keys that have enabled us to achieve the C41 project as it stands today. We set ourselves the challenge of offering everything that a car in this segment has to offer, whether in terms of roominess, practicality or even day-to-day comfort, in short: the standards of the segment. But we reinvented the silhouette to create a new appeal. We were able to take advantage of the CMP’s maximum length with a generous wheelbase that gives us a roominess that will set the benchmark.”

Were the SUV codes decided at the start of the C41 program?
M.P.: “We took the decision to enrich the C sedan by cultivating extreme fluidity, with the spoiler, the spoiler, the flowing roof arch that gives a coupé-like appearance and we brought the SUV’s attractiveness to the fore from the outset, like the large wheels and the low-section elements that are also everyday protection elements and segment the bodywork to give it more length.”
Below, the sheet metal rebate of the door in 1 receives the black exterior protection that extends well below the door base in 2. This masking effect improves the appearance of the lower body.

“The C4 isn’t the brutal effect of an SUV, it’s fluid, elegant, yet asserts a real robustness thanks to its curves and curves. Its very smooth fenders are reinforced at the wheel markings and we are proud of this alchemy between fluidity and coupe character.”

The question that LIGNES/auto is asking is about that “C” shaped stamped part in the front door?
M.P.: “Yes, I read about it! It is explained by our desire to place the wheel in the middle of the front block, a block defined between the end of the bumper and this stamped part. If it wasn’t there, we might have a perception of a slightly short engine hood for a compact sedan that also targets the territory of the roadster.”

“And one of the attributes of the latter is a rather long hood. Segment C is the crossroads of the worlds! It’s a compendium of all the expectations of customers who want a compact sedan that’s both compact and at the same time a true long-haul sedan. The perception of the front end’s length is very structuring for credibility. We did everything we could to amplify what the CMP platform already offered us with its rear windshield, and we wanted a front end that’s really consistent and that really puts us in the real world of a true long-haul sedan.”

A stamping on the doors, it necessarily brings you closer to the codes of the Peugeot 2008 (below)?

M.P.: “In terms of modelling, that has nothing to do with it. There is no doubt that the work done at Peugeot is different. On the Peugeot, other style codes segment the entire side of the car, whereas on the C4, it’s very local since it’s done just on the front door. On the C4, it’s the curves that link the different zones. The skin is made of a protective volume in which the technical elements, the protection zones or the new lighting identity are embedded. This remains a very Citroën style code.”

The CXperience concept car of 2016, without edge lines, was supposed to herald the design of the Citroën of the future, and now the C4 is a long way from it!

M.P.: “No, you have to understand that you can’t stay static forever! With the C4, we’re targeting customers who like to drive, with a bodywork that expresses an efficient, muscular side and we’ve therefore brought in folds that structure the car’s skin. They bring precision in reading, and make the shape more athletic, more muscular.”

The C4 is a hybrid of a tall car and a coupé with a leaky roof…
M.P.: “The real challenge of the project was this silhouette with the roof leaks and the spoiler to express the aerodynamic performance. The large wheels contribute to this aerodynamic effort because, together with the car’s extension, they allow the entire underbody to be covered. From the outset of the project, the style theme worked with this aerodynamic bias.”

What about the GS in there? Was it an inspiration to you?

M.P.: “I’d say that the GS, like the C4 today, was ahead of its time. In terms of design, it’s obvious that the roof drop and the three side windows bring them together, but there was never any question of retro-design. When it comes to style, you always look to the future and create surprises!”

The rear panel looks extremely complex. First question: the tailgate window (above) is seconded by another element under the spoiler?
M.P.: “No, it’s the same part… We worked with the glassmakers to make this whole thing in one piece. The glass has a large radius of curvature which is hidden by the spoiler. We worked on the shape to a tenth of a millimetre with the aerodynamic engineers. In industrialization, the spoiler is added, screwed laterally on the structure of the flap and at the same time glued on the glass. Another trick in this area is that the tailgate’s on-board lights are mounted on top of the integral lights on the body side, and the customer will never see the interstice in this area. Another advantage is that the onboard light is not split in two by the cut-out in the flap.”

The small black piece at the base of the rear pillar (above in 1) is there to create the effect of a floating roof ?
M.P.: “Not only. One of the challenges is to make sure that the customer understands that the spoiler is integrated into the design on all versions (2), that it is not an addition for a sport version. The styling theme works like that, and that naturally led to the floating roof, which is very airy, with pillars that taper back to the side of the body. You can see this architecture from the very first sketches.”

It’s a place where the challenges have been many, enough to tear your hair out!

M.P.: “No, it’s not necessarily the most complicated place. It took a lot of persuasion. With the two light sources echoing those in front, you get something that is not cut out. It’s clean and very much in keeping with one’s identity. We made a gamble by having this complex assembly to finally bring more simplicity in the reading for the client. And incidentally, to make a less expensive set! “

Same question for the front soft-nose, which also seems to be very well done… Even complex!
M.P.: “It’s a classic part, an assembly assembled at the supplier’s who arrives on the production line. It consists of a skin that receives the part that supports the double chevron, the chrome parts, the reinforcements and the optics. For industrial issues (chrome plating bath), the ends of the chrome and flared rods are in two parts. As for the headlamp, it is in one piece.”

What do you mean?
M.P.: “The leds in the upper part and the optics in the lower part are part of a single block (delimited in yellow above), in a single piece. It is less expensive. The stylistic challenge is in particular this blade of the soft-nose (in green above) which separates the optical block into two parts, making them visually totally independent.”

The light signature on the front (above) is also changing…
M.P.: “Yes, this is the first time since the appearance of our double-stage signature (C4 Cactus and C4 Spacetourer) that the lower branch of the chevron is hosting DRLs. As for the optics, we’ve plunged them into the shadows with interesting work on the indicators, which have the same technology as the DRLs, with a floating crystal aspect.”

On board, we find a serene atmosphere, a piano board…

M.P.: “Yes, it’s horizontal as on all Citroëns today. It respects the codes! On board, we imagined, created and positioned multiple storage spaces, not to make a dm3 capacity figure, but so that each of these storage spaces is useful, practical and essential to daily life.”

Is there a “accessories” lady or gentleman who comes with a suitcase of tissue boxes, cups, notebooks, tickets, etc. to put away?
M.P.: “Absolutely, but her suitcase is virtual because everything is designed digitally. We’re even studying the kinematics of digital access and we can manoeuvre them thanks to a virtual headset.”

Are there any innovations in ambient lighting?
M.P.: “The instrument cluster is backlit, giving the impression that the handset is floating. There’s a little bit of magic there! As for the steering wheel (below), it’s also new”.
For LIGNES/auto, it reminds a little bit of the SM’s single-branch with its wide lower branch!

The exterior and interior styling seems to have required a lot of care in the details. And so some hard points for the development?
M.P.: “No, no more than for any other project! On the contrary, they were great challenges to take up, with a multitude of stakes. I repeat, the team can be proud of this successful alchemy between segment standards, without compromise, and this SUV treatment that is absolutely not repulsive. On board, whether it’s the stowage compartments, the innovative HMIs or the head-up display, we can say that we haven’t given up a thing!” 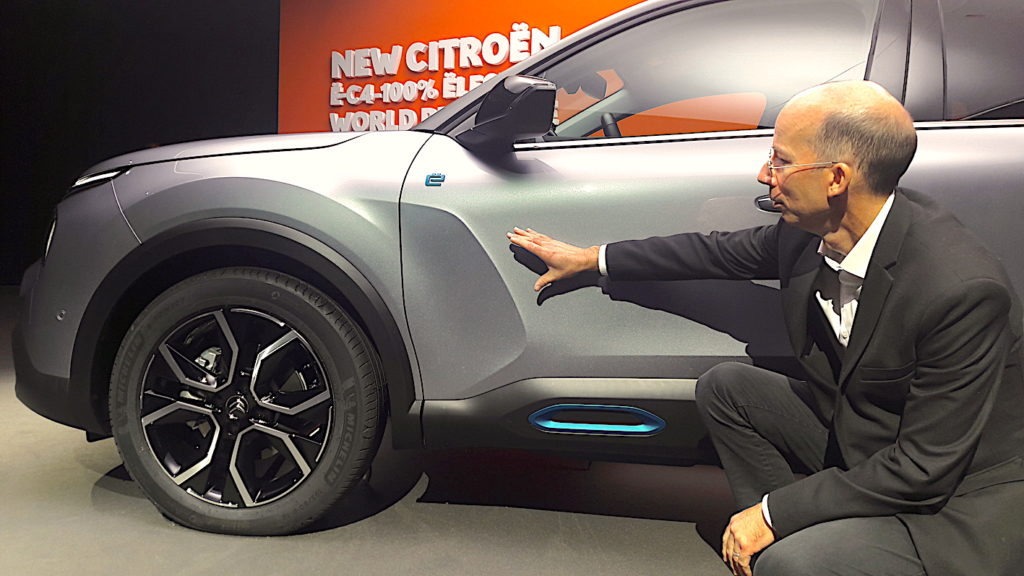