With its 270 hp Turbomeca turbine at… 28,000 rpm, its tapered silhouette of 4.84 m, its width of 1.82 m and its height of only 1.10 m, the Étoile Filante of 1956 (66 years ago) is reminiscent of the features and architecture of the Alpine Alpenglow prototype of 5.21 m in length and 1.02 m in height. The latter does not have a turbine, but powers its engine with hydrogen and its silhouette, if it corresponds to the codes of the Hypercars of the 24H of Le Mans where Alpine will return in the queen category in 2024, is dressed with a design which recalls that of the Étoile Filante.

Obviously, the designers’ proposals – including that of Bertrand Grisard who is interviewed in the magazine – are all Zero Emission machines. They are not too far removed in their design from the Alpenglow, although of course it has been more than six years since it was introduced.

Renault Group press release from 2016 on the occasion of the 60th anniversary of the Étoile Filante (1956):

“The “Étoile Filante” remains unbeatable to this day: a top speed of 306.9 km/h for the kilometre and 308.85 km/h for 5 km. This pretty blue car, almost 5 metres tall, is celebrating its 60th birthday this year! We are in the aftermath of the Second World War and aeronautics is on the rise. Joseph Szydlowski, the head of Turboméca, a well-known specialist in turbine engines, began manufacturing small units of these powerful engines, which he would equip, in particular, the famous Alouette helicopters. He quickly approached the Renault company, which was looking for new techniques for its engines. Pierre Lefaucheux, the boss at the time, could see himself breaking the world speed record…”

“The project was launched in 1954 and entrusted to three experienced men: Fernand Picard, director of studies, Albert Lory, an outstanding engine designer and Jean Hébert, engineer and driver. Around a super-powerful turbine, developing 270 horsepower at 28,000 rpm, they designed an extraordinary car. The Étoile Filante was presented to the press and specialists on 22 June 1956 at the Montlhéry racetrack. There were only two examples! The record of the Étoile Filante at Bonneville in 1956 was reported in the press worldwide, particularly in American newspapers.”

“This achievement helped to establish Renault’s reputation on the other side of the Atlantic. A success that would indirectly benefit the Dauphine, launched for export at the same time. Unfortunately, this star was to be a fading one and would quickly fade away with its record. Mainly used in aviation, the turbine posed some problems for its adaptation to the automobile, particularly in the area of eliminating the heat released and adapting the enormous rotation speeds of the turbines to road propulsion.”

“In addition to its media impact and its design, which was far ahead of its time, the Shooting Star project was of great technical interest. It allowed the study of the ground behaviour of a very thin vehicle moving at very high speed, the influence of drifts and the braking of a very fast vehicle with no engine brake. With the Étoile Filante, France responded to the work undertaken by both Fiat and General Motors.” 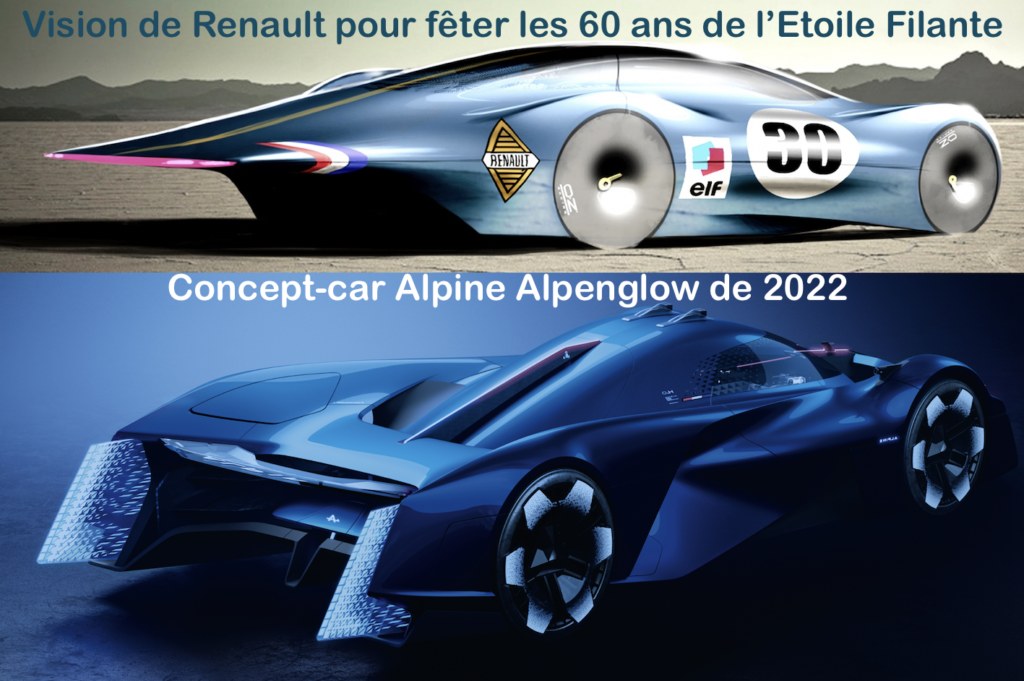