For Covid-19, the scientists are looking for patient “zero”. For the Porsche passion virus, it has been a long time since this “zero” vehicle has been found. A look back at the birth of the 356 in a sawmill in an Austrian town with the unpronounceable name: Gmünd!

Dark post-war years. The English gradually transform the ruins of the Wolfsburg factory into a building ready to start the production of the Volkswagen that Hitler wanted. And thus industrialized thanks to the allies. At the same time in Gmünd, Austria, where the Porsche ferry team took refuge (see the BONUS at the end of this post), the idea of designing the first Porsche resumed its course. But nothing is simple. In 1946, Ferdinand Porsche was imprisoned in Baden-Baden, then freed and driven to France where a team from the newly created Régie Nationale de Usines Renault presented him with the project for the future 4CV, below.

He knows that his son Ferry is waiting for him with more than just ideas: a project that is coming to fruition. Instead, Ferdinand Porsche is incarcerated again, this time in France in Meudon, then in Dijon where he stays for about twenty months. In August 1947, he finally regained his freedom. But he is terribly diminished…

During this long and arduous period, his son managed all the work of the Porsche engineering office in Gmünd, including the design of the famous Cisitalia, but also the in-house project for the series-production sports Porsche known as the Type 356. Although Ferdinand Porsche has always dreamed of creating his own sports car, even though the people’s car project was close to his heart, it was his son Ferry who designed the 356 at a time when his father was deprived of his freedom and far from Gmünd. The very first 356, a roadster with the registration number “K 45.286”, was completed just one year after Ferdinand Porsche and his design office moved to Austria.

This very first Porsche in a long series is based on a tubular steel chassis and features the air-cooled Volkswagen engine with a displacement of 1,131 cc and 40 hp. This engine is located in front of the rear axle, with the gearbox behind it. It is therefore not (yet) a full rear engine. Contrary to previous projects from the design office, this type 356 is not primarily dedicated to competition.

It’s more like a real sports car for the road. The all-aluminium body of the “K 45.286” was completed in less than three months and in June 1948, one year after Ferdinand Porsche’s release, his son was finally able to reveal the result of a project that was very different from all the genius of the Konstrukstionburo…

This 356-1 is also very different from all those that will follow, first of all because its tubular chassis structure is ultimately not suitable for small series production, for cost reasons. The second version of the 356, naturally named 356-2 and registered “K 49.801” breaks the rear mid-engine architecture of the 356-1 and adopts a layout derived from the Volkswagen one.

Its engine tilts behind the axle and thus transforms the first series-production sports Porsche with engine into a rear overhang – an architecture that still persists today!

The tubular chassis is replaced by a more modern solution that is easier to industrialize in small series: a steel box-beam structure (above), the whole is dressed with a superb two-door aluminium coupé body. Comfort seems much more promising than on the totally open 356-1.

This 356-2 will serve as a basis for the 356 we know, but the case is not so summary. This is 1948, barely three years after the end of the second world war. In Austria, producing such a vehicle with an aluminium body is not easy, neither is obtaining the various export authorisations!

And, perhaps most traumatic, Ferry Porsche realizes that his father no longer has the energy he had before his incarceration. Porsche, the company created by Ferdinand, now rests on the shoulders of his son Ferdinand Anton Ernst, known as Ferry … He has just celebrated his fortieth birthday…

Despite all these difficulties, the first Porsche was exhibited at the Geneva Motor Show in March 1949. However, less than 50 models were produced by craftsmen between the birth of the 356-1 in 1948 and 1951, the year Ferdinand Porsche died! It is at the heart of this period, in 1950, that Ferry Porsche decides to rehabilitate production in Germany. It was established alongside the Reutter body shops, which produced the first German 356s, as opposed to the 356s coming out of Gmünd in Austria, with bodies no longer made of aluminium but of steel. History is on the move!

BONUS: the first Porsche was built in a sawmill

In the autumn of 1943, “Dr. Ing. h. c. F. Porsche Gesellschaft mit beschränkter Haftung, Konstruktion und Beratung für Motoren- und Fahrzeugbau”, i.e. in short, Ferdinand Porsche’s engineering office, was looking for a new location twelve years after its foundation. Bombing raids on the city of Stuttgart were becoming more and more frequent and jeopardized production. In 1944, Ferdinand Porsche therefore moved to the much safer site of Gmünd in Austria (below, the current map to locate the town of Gmünd).

Working conditions in the buildings of a former sawmill were more than difficult for the company’s approximately three hundred employees. Machines and materials were in short supply, and the wooden shacks were full to bursting point. Space in the barracks was so limited that workers could barely move between the machines.

Additional barracks had to be built for the management and the canteen, and another one for the engineers was built in the district of “Gries an der Lieser”. In spite of this, the situation in an isolated valley had an invaluable advantage: wartime unrest hardly threatened the area and above all there was enough food for all the employees in the rural area. The 356 could be born in peace… 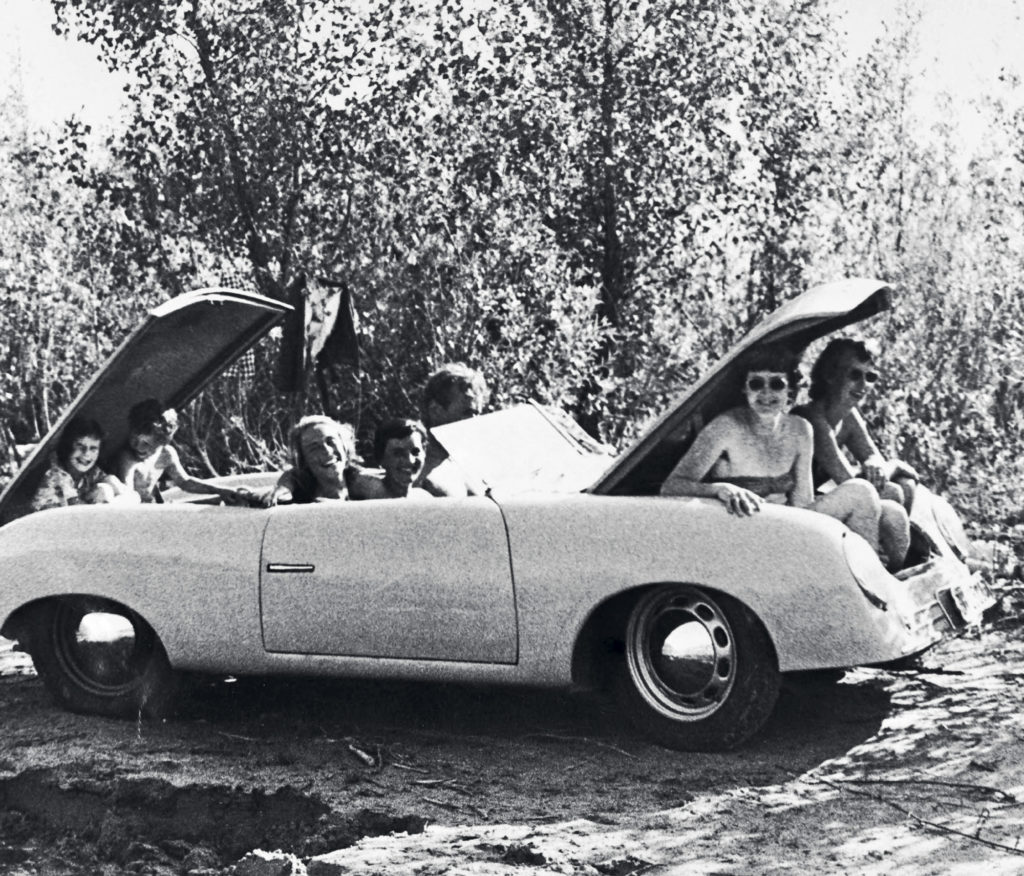