One last little pleasure before plunging back into the world of design? Here is a model of the excellent Amalgam house that seduces us. For the pleasure of the eyes, because it is all the same a question of design here!

Often considered the world’s first Supercar, the Jagaur XKSS was the road version of the D-Type that dominated Le Mans and was victorious in 1955, 1956 and 1957. Jaguar retired from competition at the end of the 1956 season (private teams raced in 1957) and ended up with several more or less finished chassis. In order to recoup part of the investment and to take advantage of the increasingly lucrative American market for European sports cars, these bases were converted for road homologation.

Only minor modifications have been made to the structure and chassis of the D-type. The original 3.4-litre engine with more than 250 hp has been retained. A passenger-side door has been added, the large spoiler behind the driver and the bulkhead between the passenger and driver seats have both been removed. Other modifications were made specifically for the American market: a real windshield surrounded by chrome was added.

Small, removable side windows have been added to the driver and passenger doors, while a fabric soft top has been added for weather protection. Chrome bumpers were introduced at the front and rear, and the XK140’s taillights were mounted higher on the fenders. Finally, thin chrome stripes have been added to the edges of the front light fairings. Steve McQueen (below/Jaguar Archives) and James Hull both owned XKSS, the former referring to his car as the “green rat”.

Twenty-five cars were partially assembled before a fire at the Browns Lane plant in 1957 destroyed nine of them, leaving only sixteen XKSS for sale. In 2017, Jaguar delivered the nine “rebuilt” XKSS with the original chassis numbers for collectors… Thus making enthusiasts grind their teeth at the time! All the cars were sold for over £1 million each.

The 1:18 scale model of Amalgam was made with the cooperation and assistance of Jaguar with regard to finishes and materials. Archival images and original drawings. The use of an extremely precise digital scanner of the original car made it possible to perfectly recreate every detail to scale.

Each Amalgam model in 1:18 scale is supplied in a luxurious black box with an outer protective cover. Each model is mounted on a polished black acrylic base, protected by a transparent acrylic display case. The certificate of authenticity as well as additional information and documents about the car are delivered with the model. 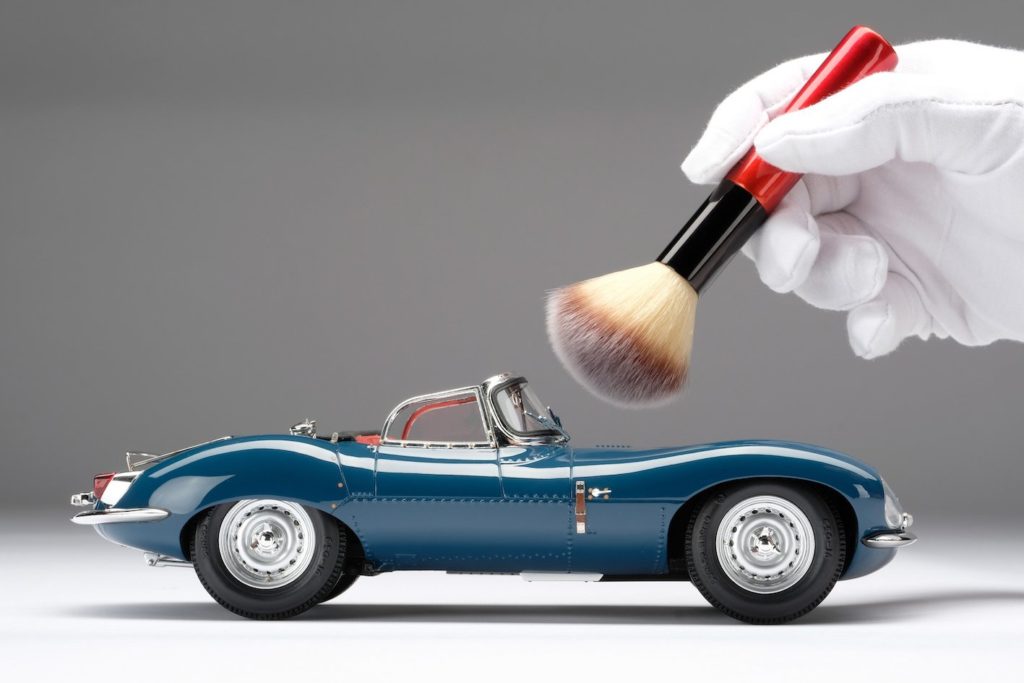