As Porsche prepares to unveil its Taycan, the first of a new 100 % electric era (and therefore witnessing an unimaginable transformation only a decade ago), LIGNES/auto looks back at some of the German brand’s events. This fourth part looks back at the different bosses who have successively headed the brand. Because to make a decision like the one to switch to the electric world, you need a boss who takes responsibility !

Ten bosses have been at the head of Porsche since 1930. Some more emblematic than others…

December 1930 is the real birth of the Porsche company with the establishment of the Konstruktionsbüro by Ferdinand Porsche (see previous posts). Other dates have been important in the history of this company, starting in 1972 when the company became a public limited company and the family members withdrew from the operational management.

Since then, different bosses have succeeded each other with more or less happiness at the head of Porsche. The last movement that heckled the German ship occurred on 23 July 2009, when Wendelin Wiedeking left the company after the rather hostile takeover bid unsuccessfully conducted against Volkswagen. David wanted to swallow Goliath. This is what led Ferdinand Piëch, Wolfgang Porsche’s enemy cousin, to lead the German group, which will first integrate 49.9% of the “small” sports car manufacturer in December 2009, before ingesting it completely in 2012. Today, Oliver Blume is in charge of Porsche after his predecessor, Matthias Müller, was appointed head of the Volkswagen group following the “dieselgate”…

More than Ferdinand, it is obviously to his son Ferry Porsche that the company owes its development. He is the author of the major concepts that led to the creation of the 356, particularly while his father was imprisoned in Dijon. He was also the one who trusted his son Ferdinand Alexander, known as Butzy, during the genesis of the 911. In 1972, he transformed Porsche, a family-run company, into a public limited company. However, he remains Chairman of the Supervisory Board and therefore supports the various managers with whom relations have sometimes been strained.

This is what Ferry Porsche wanted : following certain internal conflicts, he decided to break with the habits of a family management committee and transform Porsche into a public limited company. His nephew Ferdinand Piëch paid the price for this new strategy and then headed to Audi with the success we know. Professor Ernst Fuhramnn, born in Vienna in 1918, became the first boss of the new Porsche era. It is towards engines, and more particularly in the field of internal combustion that he highlights his skills. He is responsible for the study of the 356 Carrera block. At the head of the management committee, Ernst Fuhrmann was to alienate the engineers by pushing the development of the turbocharger, first for the competition and then for the series in the mid-1970s. It validates and develops the program of front power Porsche cars equipped with the Transaxle system, a range designed to succeed the 911. It was he who pushed the 928 project that won the “Car of the Year” award !

It is precisely at the time of the presentation of this award that the crack with the family appears in the open : Ferry Porsche is not accompanying him to this ceremony ! In 1979, Fuhrmann even imagined Ferry leaving the company in order to erase the old direction he considered dusty, because it was attached to the 911 alone. For Fuhrmann, the future lies in front-engine models. It thus abandons the development of the flat-6. Despite his title of honorary professor awarded in 1977 by the University of Vienna, he left the company in the early 1980s. Described, however, it must be remembered that without it, without “its” Porsche 924 or 928, the brand might not have survived the 1970s….

Ernst Fuhrmann having left, it is his antithesis that takes over. Peter Schutz is a meteorite in the Porsche galaxy. Born in 1930, this German exiled himself and his parents to the United States at the age of eight. He returned to Europe in 1978 and parachuted into Porsche on January 1, 1981. Schutz believes in the survival of the 911 in a context where certification standards are becoming increasingly stringent, while at the same time, sales of the 924 and 944 are proving to be very successful. But engineers believe that, without legitimacy, Peter Schutz will have difficulty getting his choices accepted, especially since his arrogance does not facilitate his relationships. His desire to (re)make Porsche a very specialized manufacturer, with the 911 in red wire, was not followed up : the 911 does not evolve much under his reign and he validates the survival of front powered Porsche. He even launched the development of the Porsche Type 989, a very elegant four-door model below, with a V8 engine at the front and a style inspired by that of the 911. Was Schutz right too early with the one that is not without mentioning the future Panamera ? Or even the… Mission-E ? He left the company without hesitation to make way for his great rival, Heinz Brantizki.

After a leader – Schutz – who only stayed at the head of Porsche for six years, here comes Heinz Branitzki, a boss who will take another quick route. Branitzki, unlike Peter Schutz, had a real career with the company, which he joined in October 1965. He was a financial manager, rather impudent, and in total contradiction with the previous president of Porsche. But he is a lucky man because he will benefit from the launch of a pivotal project for the history of the 911: the 964 type. The 911 Carrera 4 benefits for the first time, if we except the 959, from all-wheel drive and the flat-6 raised to 3.6 litres. Building on the success of this launch, Branitzki retired in 1990, only two years after taking up his position.

Like Peter W. Schutz, Arno Bohn was appointed President of Porsche without having set foot in the company before. He built his career at Nixdorf Computer, from programmer in 1969 to director of the firm in 1986, from director of the Munich subsidiary in 1972 to head of the Austrian branch in 1974 and before joining the management committee in 1978. When he arrived at Porsche on March 9, 1990, he found a company still entangled in its bivalence between the front engine models and the 911 icon. He will not make the decision to kill either family. His successor will take care of it….

He is clearly the man of the rupture and rebirth of a brand close to disaster. Wendelin Wiedeking has prioritized the many problems of the company he has been in charge of for more than fifteen years. First project : the industrial aspect of the company. He decides to apply to this “small” car manufacturer the productivity rules found at… Toyota. The factories that offer a pitiful rate of productivity are completely redesigned thanks to the work of two Japanese, Yoshiki Itawa and Chihiro Nakao, the latter is the author of the book “Kaizen Forever”. Second project : the product. Wendelin Wiedeking decided to stop production of the 928 in the short term and to dedicate plant number “2”, which produces it, to the rest of the range. An offer that the owner will completely redesign based on the sharing of a modular platform, that of the future Boxster and the 911 type 996. Wiedeking will also propel Porsche into the world of luxury and sports 4×4 with the 955 project, which will become Cayenne in 2003. But on July 23, 2009, he resigned after Porsche’s plan to take over Volkswagen failed.

Born in August 1960, Michael Macht is part of this generation of managers with solid experience in the Volkswagen Group, particularly in the field of production. He joined Porsche in 1990, in the world of engineering – engine planning – and then moved closer to the management board. He joined the committee with responsibility for production in 1998. He is also known to have been a strong supporter of the Cayenne and Panamera programs and succeeds Wendelin Wiedeking at the last minute for a transition period.

Barely twenty years old, the young Matthias Müller made a short stint at… Audi NSU Auto Union as a toolmaker ! Less than ten years later, he was hired by Audi where he held various positions, including Director of the Audi A3 project. In 2007, he followed Martin Winterkorn, the new head of Volkswagen, and took over the “product” strategy for all the group’s brands. In 2010, he was appointed to the top position at Porsche. For a short time because he was appointed President of the Volkswagen Group after the “dieselgate” affair and Winterkorn’s resignation.

Oliver Blume, a product of the Porsche series, succeeded Matthias Müller in 2015. Until then production manager, this new boss manages a healthy, high-performance company with modern industrial tools and a clearly defined future product plan. It is up to him to guide Porsche back on track for the 2020s with the introduction of electric model(s). That’s how he announced the industrialization of the Mission-E concept, an original Porsche that will be unveiled in a few days : the Taycan. 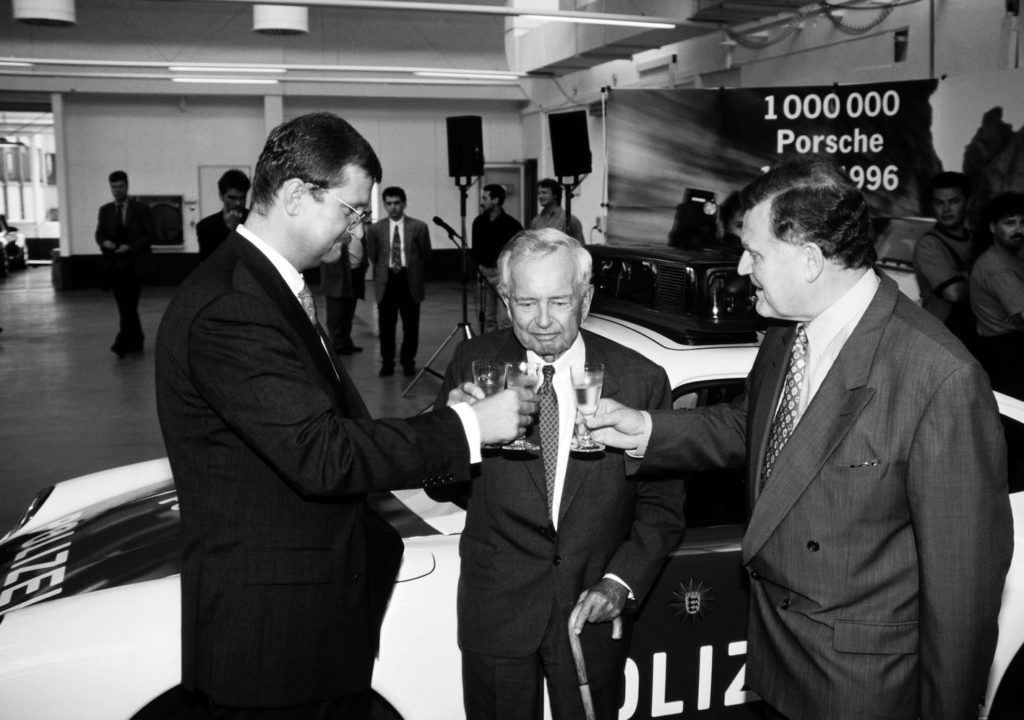