Gordon Murray began his career as an engine design engineer while building his own sports cars. He then spent 20 years as technical director of two legendary Formula 1 teams from 1969 to 1990: Brabham and McLaren.

It first made its debut at Brabham, with the BT44 and then the incredible BT46-B with its large rear fan capable of generating a ground effect and countering the unbeatable Lotus! Niki Lauda would lead Murray’s creation to victory at the 1978 Swedish GP (below). His team-mate John Watson was not so happy: a wide bend gave the gravel vacuum cleaner a bit of a kick… We find, 42 years later, this fan on the T-50 because the laws of physics and aerodynamics don’t necessarily change!

Anyway, Gordon Murray went on to design the stunning McLaren, which enabled him to win three consecutive championships (1988, 1989 and 1990 with Ayrton Senna and Alain Prost, happy this time to cross the path of this outstanding engineer! It was in 1990, after 50 Grand Prix victories, that Gordon left Formula 1 to found McLaren Cars Limited.

His first project is the supercar “McLaren F1”, an exceptional machine that already dreams of transposing an F1 on our roads (below). A competition version of this McLaren F1 won two world championships of sports cars and the Le Mans 24 Hours in 1995. McLaren Cars is then consulted by… Mercedes-AMG to develop the Mercedes SLR McLaren.

Gordon left McLaren in 2005 to create his company “Gordon Murray Design” in 2007, of which he is President. The press release of his birth explains in no uncertain terms that “this innovative British company is a world leader in automotive design and has an in-house design, prototyping and development capability“.

In 2019, Professor Murray was appointed Commander of the British Empire (CBE) by the Duke of Cambridge, Prince William, in recognition of his contributions to the motor sport and automotive industries over the past 50 years.

But also: soon a production site!

In 2017, Gordon announces the creation of a production site for its T-50 supercar, the Gordon Murray Automotive plant, which will produce in limited series other equally innovative models based on simple and exclusive driving perfection. The company’s first car is therefore the T-50, which goes against the current trend of producing ever more complicated and heavier vehicles. 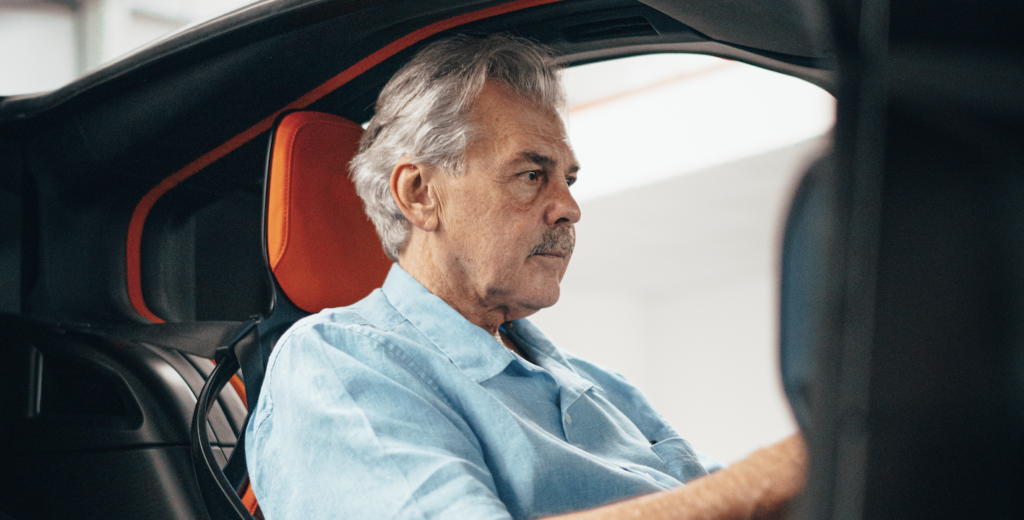