When in 1975, the Citroën style center was left without a boss after the departure of Robert Opron (author of the CX, GS and SM), nothing seemed to bother the management, who gave little credit to the team in place at the time… However, the latter was going to show its strength. In vain

In 1980, as the Citroën styling center entered its fifth year without official management, Jean Giret (above) – Robert Opron’s right-hand man and an emeritus modeler – pushed the studio team to demonstrate its know-how to counter Bertone. The Italian coachbuilder is indeed pampered by the management and has just completed the project of the BX which will be marketed two years later, in 1982.

The project for a successor to the CX, which was studied in secret in Citroën’s in-house styling office, was born at the beginning of the 1980s. It is the work of Giret who is trying at all costs to rehabilitate his team. Project E is a work that is not based on any official specifications. Jean Giret is then a discreet and voluntary man. Pragmatic. With his colleagues in the design office (Gromik, Charreton, Dargent, etc.) he held the style at arm’s length for five years, between the departure of Robert Opron and the arrival of Trevor Fiore. His ambition? To show that after the formation of the Peugeot-Citroën group, the brand had retained all its creative faculties. To express this appetence, what could be better than the project of a large saloon car, as the CX born in 1974 goes over its six years of existence.

This “E” project is the last one to receive the imprint of the style team that remained virtually intact after Opron’s departure. In 1989, Jean Giret evoked this programme with me: “In June 1980, when we carried it out, the BX was already frozen but it was not yet commercialised. We were at the bottom of the wave and in the grip of a work of undermining that came from all sides, notably within Peugeot-Citroën itself, in order to introduce the Chrysler designers. There was a closing of ranks within the Citroën style of which I had become the leader. Estaque had asked us to prove that the Citroën style was not out of order. For this “E” project, there were no specifications, but we imagined it: we had to reinforce the vehicle in terms of volume, and therefore dimensions.”

“It was the only replacement programme from CX to XM. With the CX, Peugeot made us understand that it was the end of the Citroën philosophy. The “E” project was carried to this model and was shown in a very discreet way to Lombard or Karcher, I don’t remember. But it was not in phase with the concerns of the moment…” The large “E” sedan offered a more generous interior width than the CX and a style that was totally in line with that of the BX, for a coherent range. The CX’s three-side windows were taken over from the CX, while the small rear door lift was borrowed from the SM. This sedan also seemed to have opted for a fifth door to access the trunk. … In 1984, Jean Giret took part in the study of the XM (the first big Citroën-PSA which shares its underside with the Peugeot 605) with this proposal below, without success… Marc Deschamps at Bertone will win the style contest of this great XM which will arrive on the market… NINE years after Giret’s “E” project ! 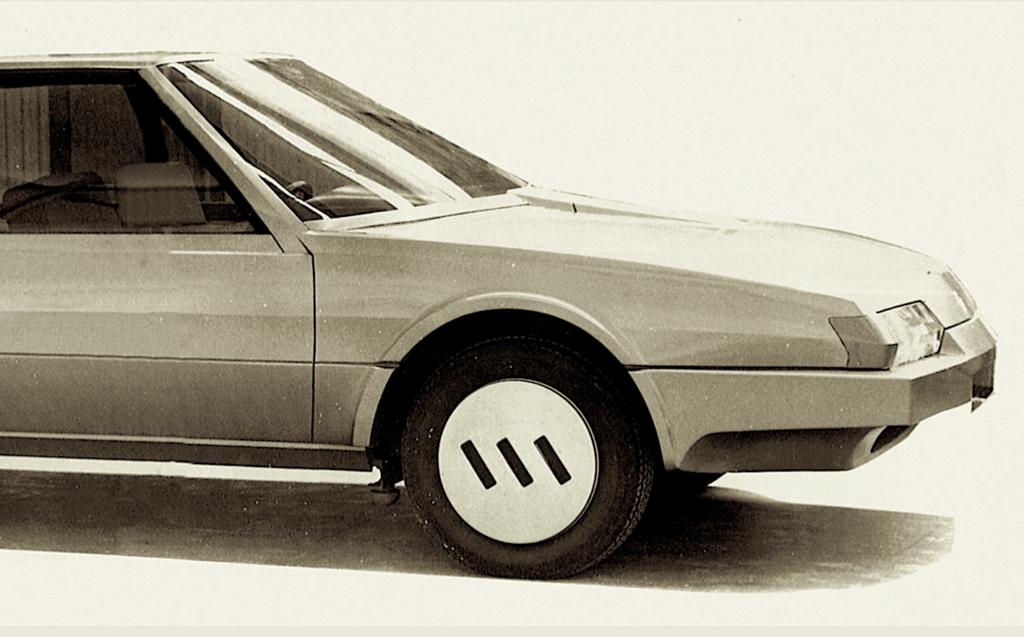