Thirty-two years after the Citroën XM, here is the BMW XM… Citroën is therefore leaving the German manufacturer free to use this name. But there is a world of difference between the large saloon designed by Marc Deschamps at Bertone in 1989 and the pantagruelic SUV designed by the team of Domagoj Dukec, design director for the BMW brand (and ex-PSA/Stellantis when he followed the development of the Hypnos concept car in 2008).

So here is the nth BIG SUV designed for the American market and probably a little bit for China. This BMW XM project will be produced from the end of next year in the United States and will be the second 100% designed model by the BMW M branch since the M1 E26 by Giugiaro in 1978.

BMW is not lacking in boldness, even in its statement that it was inspired by the M1 icon, especially for the two rear side logos on the rear window: “Our logo is now laser-engraved on the window below each of the two roof rails, thus evoking a stylistic feature of the BMW M1, which to this day remains the only model developed entirely and exclusively by BMW M GmbH.”

We won’t dwell on the mechanics, which BMW explains “combines a V8 block with a high-performance electric motor to develop a combined power of 750 bhp (550 kW) and a maximum torque of 1,000 Nm”. We’re just noting that the next world is not far away, but some manufacturers are still putting out big, bewitching-sounding V8s… Evil, good, neutrality… especially when it is carbon, remains a vast debate!

Above all, we want to highlight the new styling identity of the BMW brand with a front end that will evolve on all future models, starting with the future 7 Series saloon which will adopt it. This is a two-stage light signature (remember that the Citroën C4 Picasso designed by Frédéric Soubirou was one of the first to associate it with a strong identity) and to best conceal the height of this solution of headlights arranged in these two stages, the lower lights of the BMW XM are housed behind a smoked window (3), while the daytime running lights (1) shape the look of the large SUV in the upper part.

The double grille (2) stretches horizontally between the headlights, forming an octagon, and is always imposing. It’s surrounded by a wisp of light. The whole thing is not really a problem on an SUV whose vertical front end can handle this double light signature assembly, but what about on a sedan? Photo of the future 7 Series above from www.autonews.fr

BMW therefore claims that this XM concept “offers a glimpse of the front design of future BMW luxury models, and it redefines the design of the BMW X models in a resolutely modern variation, reinterprets the concept of luxury in the automobile and revisits classic interior design schemes.”

Let’s talk about the interior, or rather, let’s publish these photos which speak for themselves… A BMW “M” is no longer just a sports car that enhances its “driver”, but becomes a luxury lounge since the rear area is treated like a real “lounge”, a word that has become very fashionable since the projects for autonomous cars with a revisited interior. “The rear seat is a unique lounge, the M Lounge, with black-tinted windows to emphasise its intimacy,” says the manufacturer. I’d be curious to know exactly what BMW thinks its customers will do in this seat? Read LIGNES/auto quarterly, no doubt… 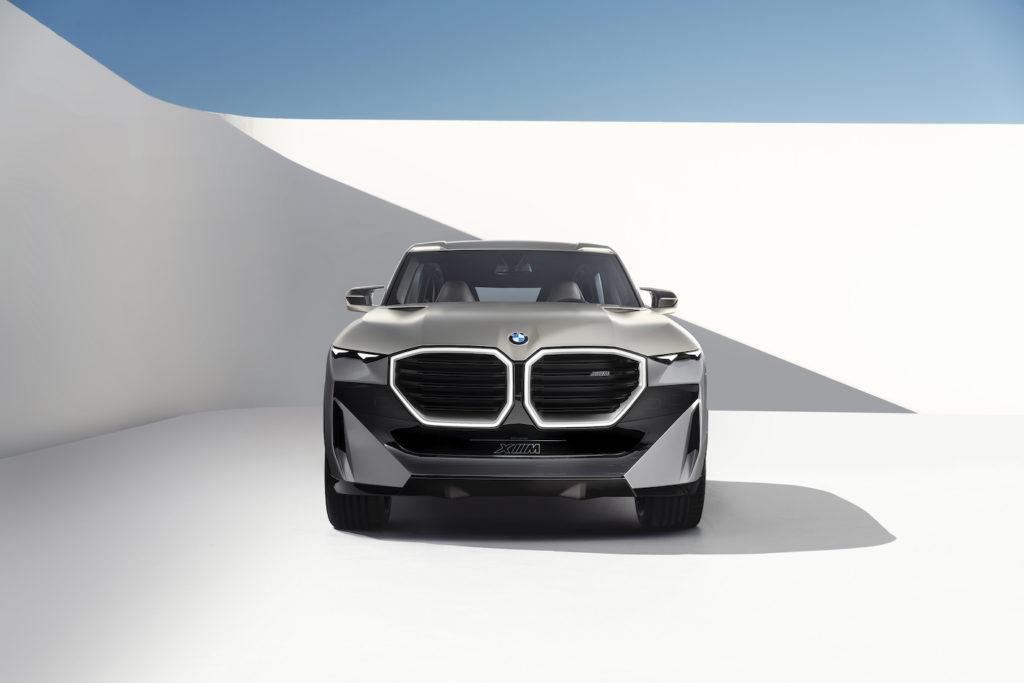