Here is an enriched version of our survey which allows us to answer the few questions that remained unanswered yesterday, notably at Peugeot. You will also discover that Alpine did not only draw from Ferrari… Over the past two years, there have been many heated exchanges between the Renault group’s pool of designers and Stellantis. We try with these different tables to list these movements, so we have enriched this version with other movements of which we have knowledge. These excerpts from Excel reveal almost thirty departures and arrivals, from Stellantis to the Renault group, from the Renault group to Stellantis, but also departures from Stellantis and the Renault group to other manufacturers, and the arrival of new designers from different backgrounds in the two French groups. In short, the changes in the staffing of the design offices of the two French giants have shaken up (almost) the entire automotive design world!

In private, a Stellantis designer told me that this war was originally declared by his group: Carlos Tavares, who moved from Renault to PSA, did not hesitate to recruit some very good people from Renault, especially in the fields of management and engineering. The belligerents then found themselves in the ring of the design world. The Renault group took its first revenge with the transfer of Gilles Vidal from the Peugeot design department to that of the Renault brand. The great leaders of automobile design will tell you that this is logical and usual, that turnover has existed for a long time. But this issue shows that the movements have been unusually large.

10 MOVEMENTS OF STELLANTIS TO THE RENAULT GROUP: enhanced version

Our tables are enriched, but if they only note the departure of four designers from Citroën (see the table above, to which we must add the departure of Alexandra Bontemps, see below), we must take into account other movements. There was the departure to other horizons of Céline Manetta in September 2021 (she became a full-time “Artist of the French Air Force, Painter of the Air and Space” in addition to her job as a car designer), and we must also take into account the “internal” departures in the Stellantis group, such as that of Frédéric Duvernier, ex-responsible for Citroën’s concept cars, who has left to take charge of Lancia’s exterior design.

THE RENAULT GROUP’S MOVEMENTS TOWARDS STELLANTIS

FAR MORE DESIGNERS HAVE LEFT STELLANTIS FOR THE RENAULT GROUP THAN THE OTHER WAY ROUND.

However, it is at Citroën that the movements were – and still are? – with two designers coming from Renault (Pierre Sabas and Yang Fu), one from Volkswagen, one from China and another from Land Rover (see table below). Pierre Leclercq confided to us a short while ago that he also trusts Indian designers, not necessarily trained in automobile design, to ensure a fresh look, notably in product design. This is undoubtedly also an obligation when we know that the Indian market is one of the brand’s priorities.

At Renault, there is a strong desire to continue to push the boundaries of innovation within the interior design of the Renault brand, with internal movements: the arrival of ChoungSun Oh at Guyancourt, from Renault’s design department in Korea, and that of Claudia Neves in 2021, in the Colours & Materials department, from the design office in Sao Paulo. This strategy is also confirmed by the arrival of Patrick Pieper in April 2021, still in Renault’s interior design. Patrick comes from Audi, where the young designer completed his thesis for six months after obtaining his Master of Arts in Interior Design at the University of Reutlingen.

We also note that Renault is attracting designers from rather prestigious brands: Miles Nürnberger, head of Dacia design, comes from Aston Martin, while Alpine design – under the responsibility of Antony Villain since December 2012 – has recruited a Ferrari designer, in the person of Adrien Acquitter.

ARRIVALS AT STELLANTIS, OUTSIDE THE RENAULT GROUP

Order our new bilingual quarterly LIGNES/auto#06 with its file on “Design 2035” here: https://lignesautoeditions.fr

DEPARTURES FROM THE RENAULT GROUP AND STELLANTIS

At Peugeot, the context is totally different. The departure of Gilles Vidal in 2020 did not shake the edifice, since Matthias Hossann, who took over the reins of the brand’s design, was an integral part of the team, with his function as head of phase advances and concept cars. It was rather the Peugeot Design Lab department that was siphoned off at the end of last year by Renault (see our first table). However, we should note the arrival at Peugeot last January of Pierre Fichet Delavault from Faurecia in the position of interior designer.

Last but not least, the Renault, Citroën and Dacia brands have changed their head of advanced design and concept cars. At Renault, it was a question of replacing François Leboine (below). Sandeep Bhambra, a loyal member of Gilles Vidal’s team, crossed the fifteen kilometres that separate Stellantis from Renault to replace him. At Citroën, the idea was to find a replacement for Frédéric Duvernier, who had left for Lancia: Pierre Sabas, ex-designer of the Clio at Renault, followed the opposite path of Sandeep to adopt the double chevron as an emblem of change..

At Dacia, the designer responsible for the advanced design and concept cars was Yann Jarsallé, who designed the Renault DeZir and TreZor concept cars, among others. He has left to join Stéphane Janin (ex-responsible for concept cars at Renault) at GAC and is therefore replaced by Romain Gauvin from Citroën. This says a lot about the desire for a breakthrough in the field of early design at Renault, Citroën and Dacia… At Peugeot, for the reasons explained above, design did not really appoint a ‘phase advance manager’ since this was the job of Matthiass Hossann*.

*Matthias Hossann joined the PSA Group in 2002 as a Citroën designer. In 2008 he moved to the Citroën/DS design studio in Shanghai and returned in October 2013 to take responsibility for Peugeot’s advanced design and concept cars before being appointed design director of the brand in July 2020.

In the end, the storm of the designer mercato between the Renault and Stellantis groups is calming down. The results of these movements, notably at the head of the design of Peugeot, Renault, Dacia, Lancia, Fiat, etc. will be perceptible, at best, in the middle of this decade. Because if the wind has blown strongly, the heavy automobile industry still needs time to act on the change…

The two managers in charge of ‘group design’ at Renault (Lauren van den Acker) and Stellantis Europe (Jean-Pierre Ploué) have put together their new teams, both drawing on the staff of their competitors!

SUMMARY TABLE TO BE LOADED VIA YOUR COMPUTER FOR A BETTER READABILITY. 28 MOVEMENTS FOR A MEMORABLE MERCATO 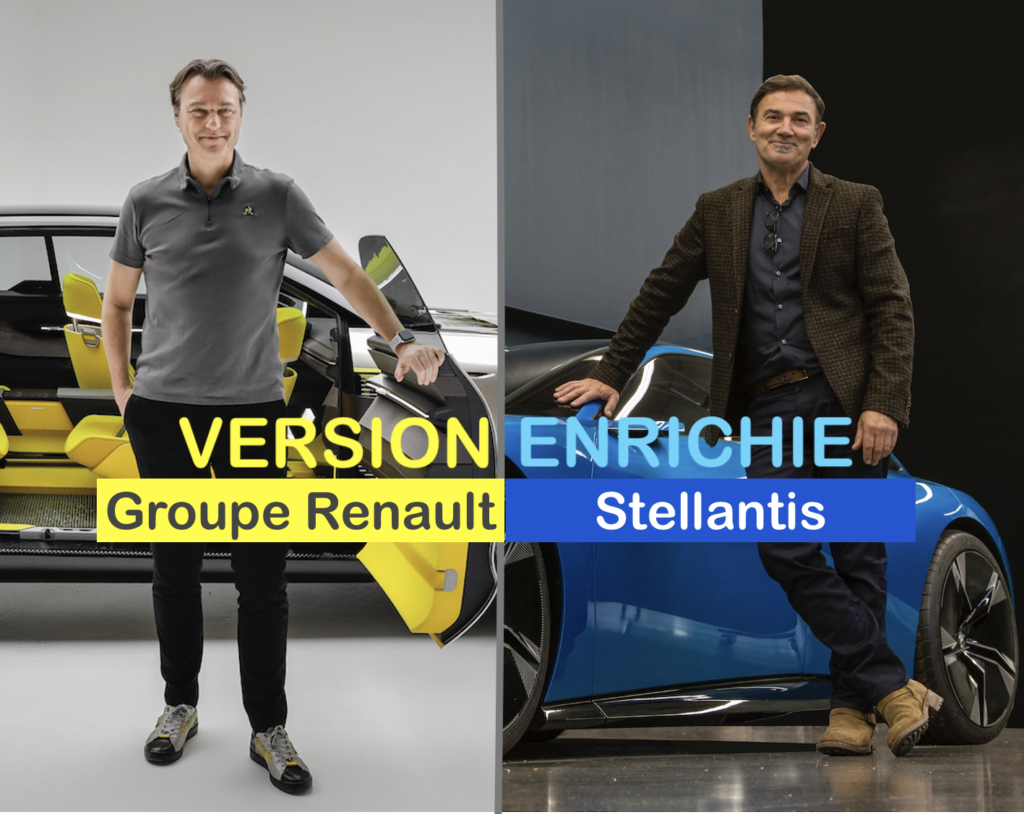