Here it is at last, this DS4, the one that should make the sales counter of the young French brand explode. Because this premium sedan targets the compact segment, the famous C segment, with its 4.40 m length, compared to 4.12 for the DS3 Crossback and 4.57 for the DS7 SUV. It should therefore be the brand’s anchor in the various European markets. And it has a lot of assets, starting with its design.

1- Admittedly, the view is a slight 3/4 front, but we can nevertheless guess that the adoption of gigantic wheels (up to 20 inches, diameter of 72 cm) allows to visually lower the silhouette, the height of which only corresponds to two wheel diameters. A godsend for designers!
2- The cabin is set back as far as possible, imposing a long, practically flat engine bonnet. Thanks to the advanced EMP2 platform with the canopy structure (windscreen bay) set back and lowered. To be checked when driving: the turning radius with these large wheels and the transverse engine .

In terms of proportions, the DS4 compared to the BMW 1 Series (above) adopts large-diameter wheels that enhance the overall impression of a crossover. It’s true that the DS tackles both premium sedans and crossovers. One silhouette rather than two: is it a lack of means? “Not at all” says Thierry Métroz, DS Design Director, “the theme of this design that takes the best of both worlds was set at the start of the project”.

ORDER HERE THE SECOND VOLUME OF THE LIGNES/auto COLLECTION WITH A REPORT ON THE 20 YEARS OF JEAN-PIERRE PLOUÉ AT PSA: https://lignesautoeditions.fr

It is undoubtedly from this angle that the DS4 is truly unique in the premium compact segment:
1- the side of the body rolls up to the tailgate (in 1′ on the right). Is the tailgate made of composite materials? No, once again, the stampers have been put to the test!
2-The headlights adopt the scale theme but also copy those of the Porsche, in particular with a hollowed volume of the most beautiful effect (in 2′ on the right and below).
3- The sharp vertical edge is imposed by an advanced aerodynamic research.
4- As on the C4, the door trims overflow under the rocker panel and this black arch tries to make the (sheet metal) silhouette look more airy.
5- The rear window is almost flat and its dimensions are slightly larger than those of the interior rear-view mirror glass ! It’s still better than on the Divine concept car which didn’t need a rear window…

No stamping complication on the bonnet (contrary to the sides, see below…) with two clear lines and a central stamping which, on this saloon, does not receive the guilloche sabre (in 2). Note that the bonnet, on the windscreen side, hides the wiper arms relatively well. Pedestrians say thank you…

The must-haves of the DS style are here

The DS hides its radars!

Camera and radars (in 1) are located IN the DS logo on the front grille. A logo which, it should be remembered, consists of three Citroën chevrons, one solid for the “D” and two superimposed for the “S”. Let’s not be afraid to write that this camouflage is better achieved than on a Mercedes S-Class! (below) But to the German’s credit, it has more driving aids on board…

Technically, the DS4 is based on an evolution of the EMP2 platform, in its “V3” version. Lighter, it also makes it possible to redefine the proportions of the silhouettes that dress it with a lowered windscreen canopy. The suspension of the DS4 is new and, like those of the DS7 Crossback or DS9, a camera “reads” the road and anticipates the appropriate setting. But the “classic” rear axle cannot carry a second electric machine to make the DS4 a DS4x4 . The 225hp DS4 Hybrid therefore remains a traction unit.

For the time being, this DS4 silhouette is available with a diesel engine (130 hp), three petrol engines (130, 180 and 225 hp) and a 225 hp plug-in hybrid petrol. After being considered in Sochaux, production of the DS4 will be carried out by the Opel plant in Rüsselsheim.

The stampers are at the top!

The bodyside and doors are (excessively?) sculpted. You’ll discover both subtle volumes with rounded wings and many clean lines. The stamping of these parts requires a fairly advanced quality of industrialization, especially at the top of each door at the junction with the wings. The Opel factory in Rüsselsheim is under pressure! We find a triangular stamping upstream of the front door, a PSA design tic (but not only) worked differently on the Peugeot 2008, Citroën C4 and DS4. The design of the sides of the DS4 is complex, alternating marked and straight stampings with much more sensual volumes. But the work is perfectly executed thanks to a close collaboration between the design and the embossers (located in Sochaux) who have done wonders!

Two versions including a “DS4 CROSS”.

It’s a pity not to have found another appellation other than “Cross”, which is very common. It can be found on many models, notably the new Fiat Tipo (below) or the Yaris Cross. A little “braimstorming” to be organised before the commercialisation?!

Luminous signature: we’ll have to find something else…

We can’t wait for the arrival of the new lighting signature inspired by the latest DS concept cars (below), as the DS4 joins a club that is less and less closed, where DRL are taking on more and more convoluted forms.

To the right fangs of the Peugeot, DS (with the DS4) and Renault (with its next e-Mégane) retaliate with signatures in the shape of “C”, then “Z”, all positioned quite low. Watch out for the pavements!

At the rear (here the Cross version) you will find the lights joined by a chrome strip below.

On board, it’s simplicity regained

DS turns the page DS3 Crossback and simplifies the environment for the driver and passengers on board the DS4. “The watchword was serenity,” Thierry Métroz tells us. The dashboard benefits from the lowered windscreen canopy. It is nevertheless massive, rising very high, without “engulfing” the occupants. The design is fluid, simple to hide the on-board technology. It gives the driver easy access to the main controls.

Note that the doors have side vents. As for the trim medallions, they are superb in their shape and drape! The console is high and benefits at its end from a storage area with a sliding lid, in front of which is the second screen that allows you to control shortcuts to commands (write a navigation address, answer the phone, etc.).

You’ll have to get used to fetching the window controls from the top of the door. Note also that the central air flow is diffused by new ventilators camouflaged behind the metal sword (below).

Below, the central screen is visually elongated as it is integrated into a piece that runs from the instrument cluster to the upholstery in front of the passenger.

The (very?) old and (very?) enthusiasts may have noticed below that the design of the dashboard sword, in the shape of an Egyptian eye, is not without evoking a project by Michel Harmand, the great Citroën exter-inter designer of the 1960s and 1970s. But in this case, I imagine that it is pure chance…

READ ON THIS SITE: WHAT DS4 OWES TO DS4 CONCEPT CARS 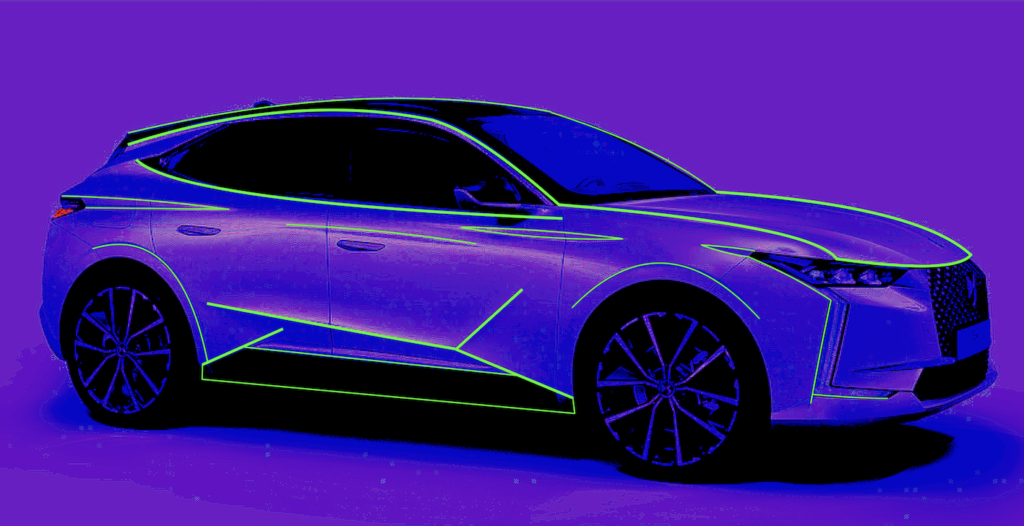