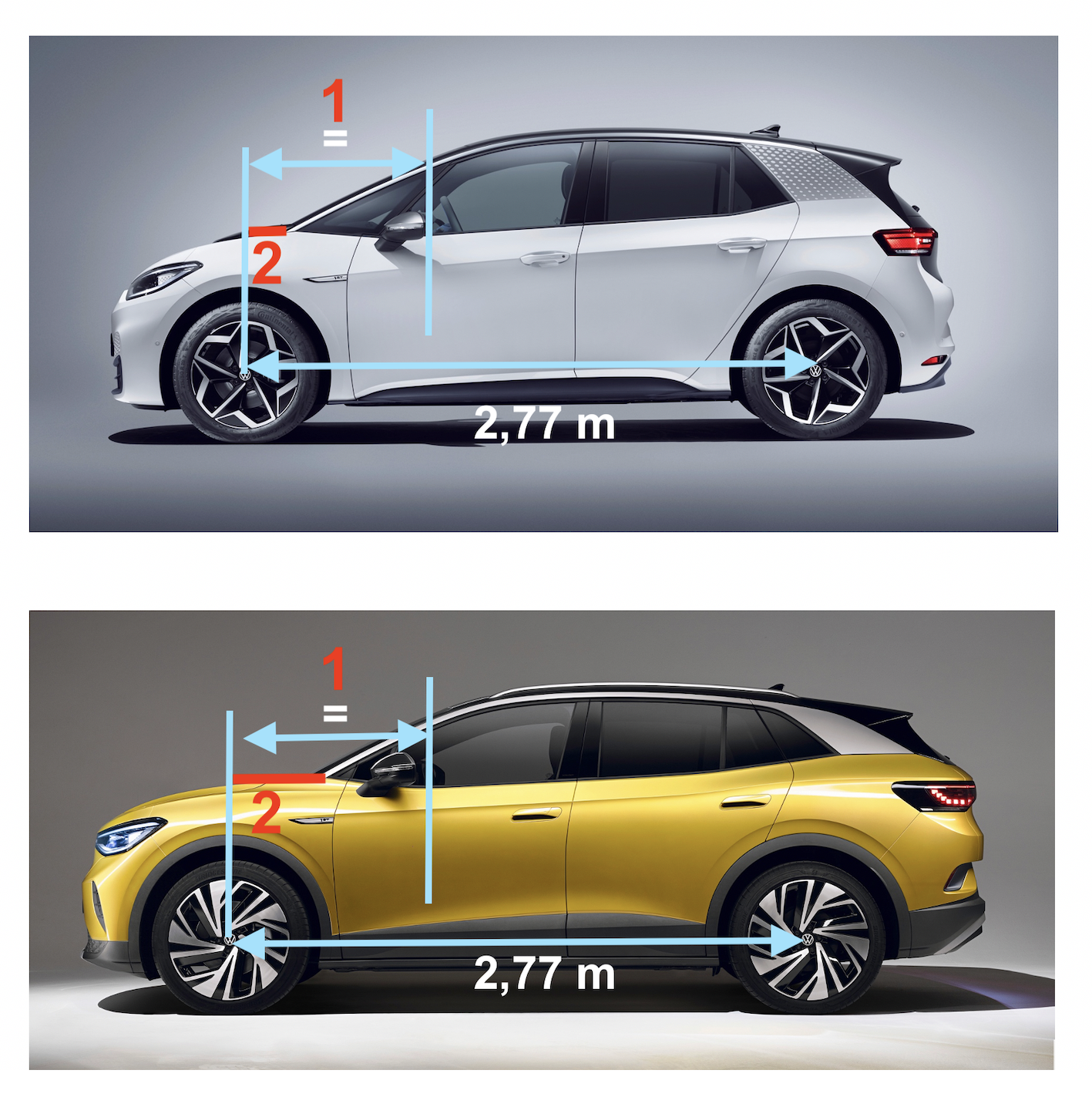 You think the Volkswagen ID.3 and ID.4 are very different? Yes, for their style and concept (single-body saloon facing a larger SUV station wagon), but not at all for their strictly identical undersides, except for one detail. LIGNES/auto explains…

Volkswagen has just unveiled its first 100% electric SUV, based on the MEB platform, identical to its little sister ID.3. The ease with which this underframe lends itself to accommodate different silhouettes is astonishing. Explanation, on the design side.

Below, the two sisters’ philosophies of style are clearly visible. The theme of the one-box sedan for the ID.3 breaks with that of the SUV for the ID.4.

1- the forward projection of the windscreen base requires the presence of a third window upstream of the door, which does not exist on the ID.4 because its windscreen base is set back.
2- While the ID.3 is almost monovolume, the ID.4 adopts a marked, almost horizontal bonnet.
3- The front face of the ID.3 slopes gently down to the number plate, whereas the front face of the ID.4 is steep, directly above the engine bonnet.
It is hard to imagine that under these two style themes, the internal structure is strictly identical on both models. Let’s take a look at this…

Above, we notice that the two VW, although intended for two very different clienteles, have the same wheelbase (2.77 m) and therefore the same interior space. Structurally, the most expensive technical areas on a platform are identical :
1- the distance between the front wheel axle and the dashboard is identical on both vehicles. This is where a complex technical area (dashboard, air conditioning, technical canopy, etc.) is located.
2- The difference is only in terms of style, with the windshield pillar overhang on the ID.3. Under these different skins, the structure is (almost) identical as we will see.

Below, the MEB platform of the ID.3. Note the magnifying glass effect…

… which reveals the only difference with the ID.4 platform below …

To better understand, here are the two platforms compared. Same wheelbase (in 1), same structural and dimensional base (in 3) and only one modification (in 2).

It concerns the perimeter of the windscreen (in 2) which houses an engine bonnet higher on the ID.4 and a forward windscreen base. The latter will contribute to the resistance to impacts which are deflected on the lower part on ID.3. For the rest, everything else is strictly identical on the two cars with their very different concepts.

So, between ID.3 and ID.4, it’s just a question of style! This famous MEB platform and the electric powertrain (for the moment, only one EV motor is installed at the rear of both vehicles) give designers incredible freedom, while keeping development costs extremely low at the platform level.

The first two 100% electric Volkswagens should logically be joined in 2022 by the ID.Buzz, which will take advantage of its totally monovolume concept to offer on board a living space of dimensions never before seen, all with slight modifications to the architecture of the MEB (below are the different VWs expected on this platform).

Industrially, of course, the VW ID.3 and ID.4 pass through the same assembly lines at the Zwickau plant (below). But this ID.4 – which addresses the world’s fastest growing market (compact SUV) – will also be produced in Chattanooga in the USA, Anting and Foshan in China and parallel to Zwickau in Emden, Germany.