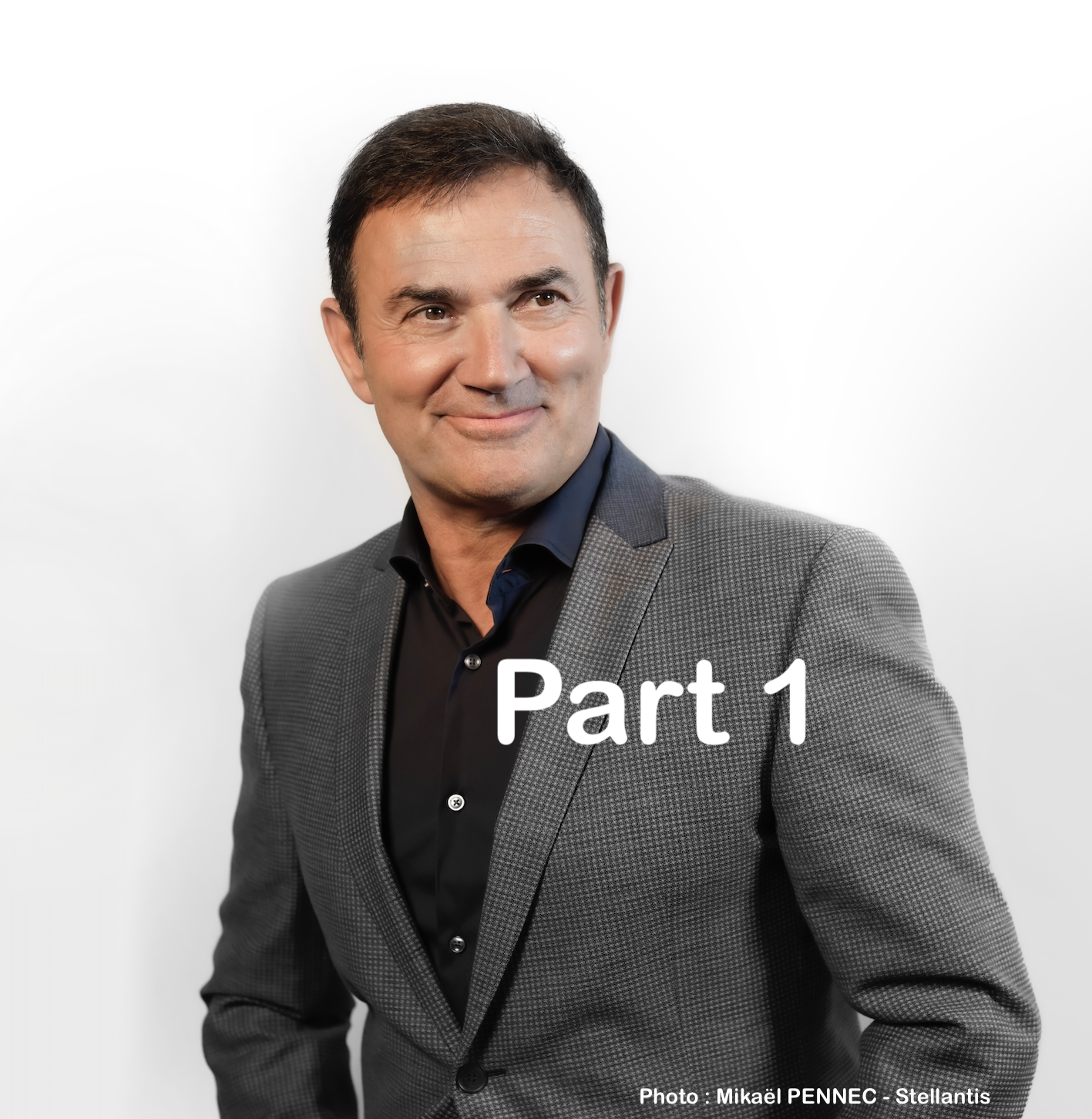 Jean-Pierre Ploué is moving to Italy, as he says “people who work for a brand, will have to do so in the brand’s home country.” In addition to being responsible for all the style directors of Stellantis’ European brands, Jean-Pierre Ploué has recently become Lancia’s style director. He tells us all about the new design organisation he has put in place in Turin.

Can you tell us more about this two-headed Stellantis design direction: Ralph Gilles (above right) for the more US-oriented brands and you for the more European brands?
The essential idea for Carlos Tavares and ourselves is to be focused on our mission. Each of us has our own know-how, our own culture. This two-headed organisation is different from that of other large groups where there is generally only one person in charge of world design. Carlos Tavares considered that having two style directors was more appropriate for a multicultural group like ours. He didn’t want a tired, scattered design traveller, but rather motivated directors who were close to their playgrounds and their culture. Our strength is our diversity!

What did you find when you arrived in Turin, where the style of Italian brands is established?
The design centre is located in the mythical and historic Mirafiori factory, which has been renovated and is close to Turin. When I arrived, the studio included all the brands – Alfa Romeo, Fiat Professional, Fiat, Lancia, Abarth, Maserati and Jeep Europe – and the team was working on all these different brands, with only a few reference points.

The structure I am putting in place is now based on the same scheme as the one that exists at Vélizy, namely a design department for each brand, and a dedicated team of creatives. We work more as a tightly knit team with a start-up spirit. We are also taking advantage of this to develop new working methods, with new tools. But today – at the end of July – the teams are still under construction. I’m hiring quite a few creative people at the moment and I’m restructuring the studios, brand by brand, with new design directors at their head.

Is Maserati design staying in Turin?
Yes, absolutely! But if Maserati is based in Turin for the design, it remains within the scope of Ralph Gilles, just like Jeep Europe.

Why?
It’s already a huge task for me and my teams to deal with the new Italian brands! These are mainly brands which will be based on Stellantis platforms, ex-PSA developments. Maserati is a luxury brand, which will borrow modules that will probably be a little more specific.

Ten years ago, when Lorenzo Ramaciotti was head of the centre, he told us that the studio had 250 people and 50 in the Alfa Romeo studio in Arese. Where are we today?
We were almost 200 when I took over the studio. We should evolve to around 240 people. As for the Milan studio, it was closed well before the merger between PSA and FCA.

In concrete terms, how do you go about restructuring a design centre into several studios dedicated to each brand?
I recreated each team with the people who were there and with new hires. I met with each manager, each director, each designer, a bit like job interviews! According to their sensibility and their desires, I directed each of them in the different studios of the brands. Now, each of them has a dedicated team.

You say that you have built up your Italian teams with local designers and new recruits. Aren’t there any designers from Vélizy with you?
There is no rule. When a designer asks me to change brands, I look to see if he has the desire and the motivation and if so, I gladly accept him. This is also the case with two designers who are going to Italy. But the reverse also works, there are designers from the teams in Turin who want to go to Vélizy to work for our French brands. Frankly, with 14 brands, we are not going to forbid ourselves from proposing career developments for our designers. It’s better for them to do it within the Stellantis group than to go to the competition.

When you arrived, did Lancia still have designers to look after it?
As I said, the whole team at the centre worked on all the brands. For example, there was one interior designer for all the projects. We will rebuild the Lancia brand, of course. For the moment, the Ypsilon is a great success in Italy with significant volumes. So we’re going to focus on replacing it. We have a specific product plan for each of the brands, but it’s obvious that we can’t relaunch a brand with a single product.

In terms of heritage, the communication mentions the Lancia Aurelia, Fulvia and many other Lancias but not often the Delta. Don’t you like it?
Of course I do, I love the Delta and I was around it when I was young! It is very important in the reconstruction of the brand, and it is typically named after a silhouette that we could develop. It is very important to us in terms of DNA. I am referring to the Delta or the Aurelia, but also to the Stratos. Stellantis’ ambition is to revive Lancia by building on its heritage, its fabulous history, and by repositioning it where it deserves to be, which is a luxurious, innovative, elegant brand with a racy style, even if it was sometimes eclectic in the past.

Lancia is integrated into the Premium division at Stellantis, alongside DS and Alfa-Romeo. So as not to embarrass the latter, will it have to forget its sporting past?
No, not at all. There are no limitations in this area. If a brand has a sporting heritage and if it needs to be revitalised, it will be. I don’t know when, it’s too early to say, but it will be.

In this division, won’t Lancia and DS be stepping on each other’s toes?
No, because my mission is threefold: to create the highest level of design for each brand, to generate the greatest design differentiation between them, and finally to achieve all this at the maximum level of economic efficiency. To answer your question, there is a big difference between French elegance – so DS – and Italian elegance – Lancia -. Of course, the components will be partly shared, but certain technologies will be reserved for one brand rather than another. And above all, the differentiation will obviously be made by the style, by the play of lines, volumes, materials, colours… All this counts.

To write your famous manifestos that define the style and graphic themes of these new brands, do you use the same tools as for Opel, DS, Peugeot and Citroën?
It worked very well when we started with Peugeot and Citroën, then with DS, and when we bought Opel. We are not going to change, even if the tools and technology evolve. The DNA of each brand has already been defined.

Each brand has its own dedicated team and its own style director. You yourself are the Lancia design director, in addition to your duties as Stellantis design director for the European branch. Why this choice?
The idea for Lancia was to start with a very small team, and therefore to imagine at the beginning that there was no style director. But for practical reasons, it became complicated not to have a brand design director, like for all the others. I stood my ground, but at some point the box had to be ticked and I filled it in under my name! Luca Napolitano (Lancia brand manager) was delighted and told me that it was great for the brand to have me as Lancia design director. We’ll see later if he was right!

In the end, you need someone to manage relations at the highest level with engineering, for example. I play this role with my team which is very structured and very efficient. It’s a bit of a return to the roots, as in 2000 at the time of Citroën, and it is therefore with great pleasure, enthusiasm and recognition that I am taking part in this rebirth…

Jean-Pierre Ploué joined the PSA group in 2000 to take over the management of Citroën’s styling from Arthur Blakeslee. In 2010, he took the design departments of Citroën and Peugeot under his wing. It was at this time that he laid the foundations for a very efficient and still lasting organisation, by appointing a style director for each of the two brands (Gilles Vidal for Peugeot and Thierry Métroz for Citroën). The same evolution took place when DS became a fully-fledged brand in 2014, with Thierry Métroz at the helm of styling, and the arrival of Alexandre Malval at Citroën, replaced in 2018 by the Belgian Pierre Leclercq. In 2017, when Opel became part of the group, the brand kept its style director Mark Adams and the Opel style operation was modelled on that of the other group brands. A new development this year with the PSA-FCA merger into a 14-brand strong Stellantis entity. The responsibility for the design of this giant is now under the direction of two men: Jean-Pierre Ploué for the brands Abarth, Alfa Romeo, Citroën, DS, Fiat Europe, Lancia, Opel, Peugeot and Vauxhall, and Ralph Gilles for the brands Chrysler, Dodge, Jeep, Ram, Maserati and Fiat AMLAT.