In 1993/1994, as the Twingo celebrated its first year on the market, Renault designer Axel Breun (*) saw his demons and passion for sports cars resurface. This young talent, who followed Patrick le Quément from Volkswagen to Renault, gave himself a Berlinette A110 when he was a young driver (below).

His passion for Alpine is very much alive. Like the one that touches rather extreme machines. And what does a designer do when he gets home from work? He continues to design all kinds of projects. In his spare time, Axel Breun will design a Twingo based on a Ferrari 308/328 chassis.

“At that time I noticed that the Twingo and Ferrari had the same wheelbase. All I had to do then was find a damaged Ferrari to continue my project, because I had the body of a naked Twingo, a “remnant” of the development of the Argos concept car!”

He couldn’t find the damaged Ferrari in his budget to recover the chassis, and the project was left there. Well, not quite. We are then in 1995 and Renault has just presented its Spider which opens the way to many reflections. Axel Breun’s “private” project then took the “official” road to the design office. The idea remained practically the same: to cover a sports chassis with Twingo bodywork.

This time, of course, it is the Spider’s chassis that is retained, with the same 2.34 m wheelbase. And the engine chosen is not just any engine: it’s the V10 from F1! The same engine that has just been housed in the body of an Espace presented at the 1994 Paris Motor Show! Axel Breun later confided that “this programme was pushed as far as the 1/5th model stage.” Below.

But nothing is lost when the basic idea is excellent! In 1998, the X65 series programme was unveiled: it was the second generation of Renault Clio. Very quickly, the project of a Clio Maxi (the first name of the Clio V6 project) was developed at Renault with the intention of redoing the 1980 R5 Turbo (model unveiled in 1978…) This programme takes up the rear central engine architecture of the R5 Turbo but here the four cylinders give way to the 3.0 litre V6 ES9.

Axel Breun’s design is much more radical than it was in the end. At the launch of the “Clio Maxi” programme, the composite body is once again based on the Spider chassis. Axel grafted “gull wing” doors (above), which were not chosen for the series but which the designer managed to place on the chassis of the…. Megane Trophy II (below). Once again, the project is abandoned as is after a 1/1 scale model was produced by the D3 studio.

The Renault Clio V6 will nevertheless arrive on the market in a very short time, with a vehicle derived from the structure of the Clio II and produced by TWR, the Tom Walkinshaw Racing (below). Too quickly put on sale, this first milestone in the history of the Clio V6, which has 230 bhp and produces in … Sweden, did not leave only good memories. It sold 1,513 units.

Renault Sport therefore takes over the development of the second generation which appears in 2003 (below) with a power increased to 255 hp. It is produced in Dieppe, phew! This time the road handling is under control and 1,309 units will be added to the total sales of this exceptional Clio.

Luca de Meo explains today that Renault must rediscover its values of audacity and strong concepts. All that is needed is for the teams to be inspired by the work done by their forefathers.

(*) Axel Breun, a Renault designer, was notably responsible for Renault concept cars from 2009 to 2014. He was responsible, among other things, for the genesis of the Alpine A110-50 concept car (below), a milestone in the history of the brand’s rebirth! 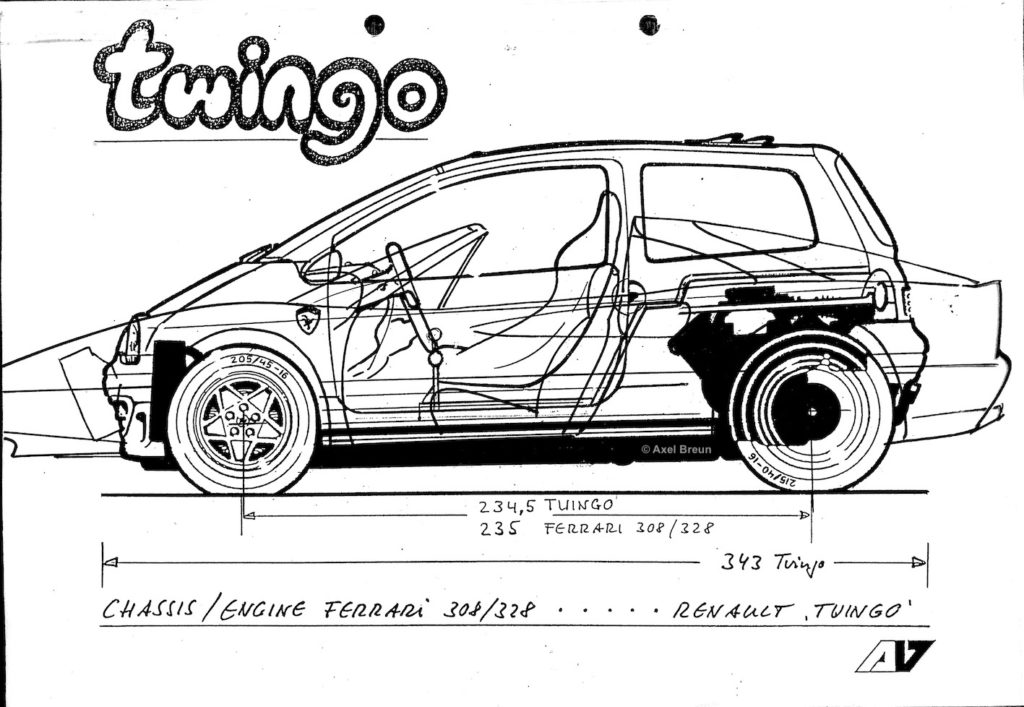