In many ways, Gordon Murray Automotive’s T-50 is the antithesis of the modern supercar. It is evocative of the stripped-down approach characteristic of 1960s sports cars. “Every component of the T-50 is a technical work of art, and the engine is no exception. I wanted the engine to look like a modern interpretation of a 1960s V12. This block would make a fabulous modern art sculpture,” says Gordon Murray.

DISCOVER THE T-50 IN THIS VIDEO LIGNES/AUTO ASSEMBLY

Gordon Murray: “From the first touch of the titanium accelerator pedal to the scream of the V12 at 12,100 rpm, the driver’s experience will surpass any supercar ever built. No other road car can offer such a combination of power, instantaneous responsiveness and driver feedback in such a direct and focused way, while remaining comfortable, refined and usable on a daily basis”.

With the T-50, it’s all about purity and balance. The exterior design meets Murray’s preference for simple, timeless lines and clean surfaces. Stylistically, the T-50 features spectacular door opening kinematics, as the doors rise as they move forward, creating a striking visual impact and making it easy to get on board. These doors echo the two engine hood openings that hinge along the T-50’s spine to reveal the V12.

On each side of the car there are two 90-litre vertically loaded luggage compartments. With all four doors open, revealing two-thirds of the car’s interior, the T-50 is like a winged predatory insect preparing for flight. Like some Italian concept cars of the 1970s…

The design took into account the importance of the pilot above all. One of the most remarkable features of the design is the central driving position, as on the McLaren F1. Or, as on the Pininfarina Ferrari 365 P Berlinetta Speciale from… 1966 ! See below.

A central line starts from the siren logo on the muzzle and continues into the passenger compartment, above the instrument cluster, cutting the driver’s seat in half and raising the rear bulkhead.

On the outside, this line is reflected by a kind of backbone that runs from the base of the dynamic air intake to the upper edge of the fan housing at the rear.

This line underlines the car’s symmetry and innate balance. Up front, a pair of high-intensity, state-of-the-art LED headlights offer a nod to Murray’s iconic F1 car.

Following the central axis and passing over the windshield, the eye is directed towards a dynamic air intake located on the roof that feeds the V12. The roof is glazed on either side of the central spine, creating a feeling of space on board and a clean exterior appearance. As the spine descends towards the rear of the car, the glazing continues, revealing the V12 engine beneath its carbon fibre airbox.

The stern is heavily sculpted to facilitate airflow to the active fins. The fan housing protrudes deliberately to the rear and is framed by two active spoilers which are located on either side of the 40 centimetre fan outlet.

The rear-mounted 400 mm fan significantly increases the car’s performance compared to a conventional ground-effect supercar. Coupled with the active rear spoilers, this fan increases the contact force by 50% (in braking mode, 100% additional contact force is generated), reduces drag by 12.5%, adds about 50 hp to the car’s power and reduces the braking distance by 10 m compared to 240 km/h.

The body of this fan is also flanked by the two 80 mm diameter exhaust outlets which are located inside a black grid with an elongated hexagonal pattern covering the entire width of the stern. At the ends, the circular red LED tail lights are eye-catching with their transparent 3D shapes that reflect the light outwards and create an elegant focal point.

The profile of the T-50 is distinguished by air outlets located behind the front wheel, split side windows and forged alloy wheels (19 inches front / 20 inches rear). In terms of proportions, the T-50 is extremely compact. Its length of 4.35 m and width of 1.85 m do not allow one to imagine such a generous interior space.

Gordon Murray: “With the design of our T.50 supercar, we are taking the same focused approach that was applied to the design of the McLaren F1. Using modern materials and 30 years of development, we have been able to offer a much better all-round car in the T-50, while keeping its weight at just 986kg, 150kg less than F1”

Who’s Gordon Murray? Here it is:

Gordon Murray: “More than half of any driving experience is provided by the engine. So from the outset, I set the highest possible standard to create the world’s best naturally aspirated V12. To be truly remarkable, an engine has to have the right character: it has to be highly responsive, have amazing sound, deliver interesting torque, spin freely and be naturally aspirated. For all these reasons, the T-50’s engine was never going to be anything other than a naturally aspirated V12.”
*features in the video LIGNES/auto 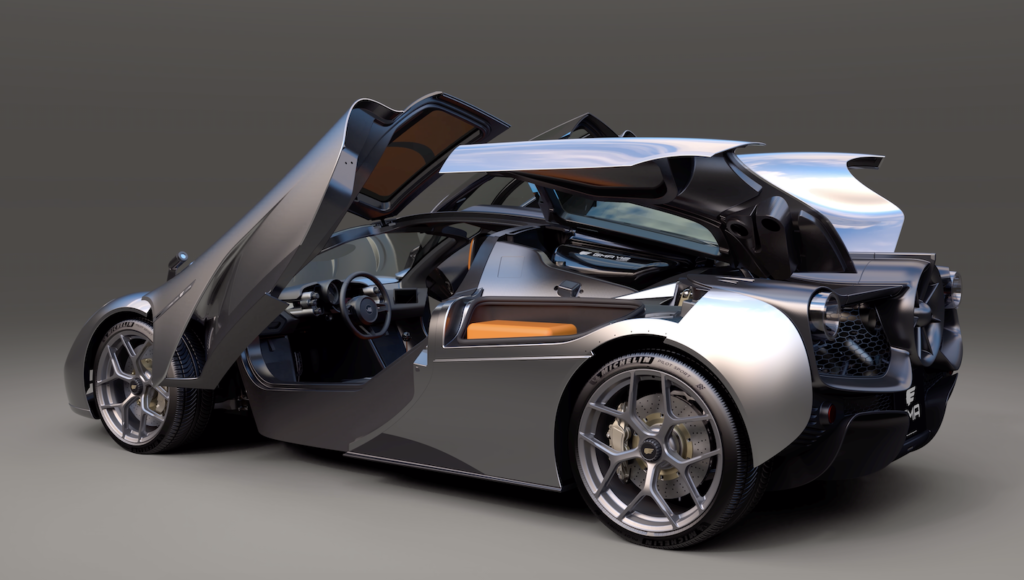