Here it is at last, this long awaited concept car! Misleadingly announced by Peugeot at the Paris Motor Show, when visitors were surprised not to see it on the stand, this newcomer completes the collection of Peugeot concept cars that began in 1984 with the Quasar. Almost forty years later, the Inception Concept retains the brand’s DNA, with a feline, dynamic and (very) innovative side.

This concept car marks a clear break in Peugeot’s formal language, not only with its reinvented face (called Fusion Mask), but also with aesthetic themes that will be found on the future 208 and 2008 (to begin with) from 2025: we are reminded of the sensual curves of the flanks and the horizontal shoulders of the wings. There is a bit of the Oxia (1988) in this concept! In contrast, the Inception Concept makes a strong statement with a windscreen/pavilion that extends beyond the feet of the front passengers. Spectacular, with a glass surface of over 7 m2!

Above, the 1988 Oxia and the Inception share horizontal wing shoulders, an XL size windscreen on the former and an XXL size on the latter, and the desire to make a reality of a future in which the Peugeot brand remains true to its dynamic and feline car DNA. The Inception Concept marks the territory of the new design boss Matthias Hossann and closes the Gilles Vidal chapter, without denying a DNA common to both periods (see our post on the face-off between the e-Legend and Inception concepts).

Come on, let’s ignore the past, because some will retort – not without reason – that a concept car is essentially oriented towards the future. This is of course the case with this new car which, according to the manufacturer, “aims to bring the majority of its innovations to production from 2025 onwards”.

The Inception Concept is based on the STLA Large platform, which one would have thought was reserved for the American models of Stellantis Monde. But no, Peugeot will be entitled to it! Sensational news that suggests powerful models, since in terms of engines, this platform (above) could offer from 340 to 820 hp with several battery packs of 100 to 120 kWh.

Statement by Matthias Hossann, Peugeot Design Director: “Peugeot is changing, but this concept is still unmistakably a Peugeot. It expresses the timeless feline attraction of the Marque and shows how optimistic we are about the future of the automobile and the emotions it provides. Bright and luminous, Inception Concept reinvents the spatial experience of driving while illustrating some of our thinking that will enable us to reduce Peugeot’s carbon footprint by 70% by 2030. The transformation of the Marque concerns all aspects of the design, production and life of the Peugeot of tomorrow. Design is fully involved in this transformation.”

The profile design has been lightened compared to that of a 408. The lower part of the doors is crossed by the TECH BAR. This flush-mounted screen emits various messages to the outside of the car when the driver and passengers approach it. The artificial intelligence of this manifesto recognises the driver and makes the desired comfort settings (seat posture, temperature, driving mode and multimedia preferences) for each occupant. In addition to the battery charge level, the TECH BAR integrates the usual welcome and goodbye messages, as well as the numerous sensors and radars linked to the driving delegation, leaving the bodywork completely smooth, as it is devoid of these technical elements.

Below, the interior is transformed. The seats have a furniture-inspired design. The headrests are positioned below the beltline. The seats also have real adjustable shoulder mats. This electro-welded upholstery, which is easy to recycle, comes from the inflatable pockets recovered from classic seats. Usually invisible, this pocket is treated with a metallic effect to integrate with the seats. These immersive seats have little in common with current car seats.

These seats and the floor are covered with 100% recycled polyester velvet, with a very metallic sheen to play with the light diffused by the glass capsule. To accompany the new perspectives offered by the postures of the seats and the clear view towards the road, this velvet is extended onto the floor. It is then printed with 3D patterns to act as a floor mat. The continuity between the seats and the floor is thus achieved with a single material, similar to that found in the 2001 Renault Talisman concept car designed by Stéphane Janin, now at GAC in Milan.

For us, without even having seen this concept car kidnapped by the CES show in Las Vegas, the major innovation comes from the i-Cockpit® ‘3.0’. This third generation since the introduction of this architecture on the 208 in 2012, definitely breaks the codes of the Peugeot cockpit of tomorrow. Be prepared, from 2025 onwards, Peugeots will no longer have a steering wheel, but a control called Hypersquare. This is a steering module in the form of a screen with four recesses for gripping. These cells have controls on the inside that are easily accessible with the tip of the thumb. Above, the Halo Cluster is a circular display that can be seen both by the driver and from the outside to broadcast welcome messages.

The Hypersquare is not an artist’s view, nor is it science fiction: it will be adopted by Peugeot models from 2025. And therefore on the future 208 and 2008! Prior to the development of this concept car, Peugeot tested and integrated the Steer-by-Wire technology into prototypes in order to develop this innovation and push the boundaries of driving ease, safety and reliability for regulated use. The physical steering column disappears, allowing the new architecture on board.

The front bumper (below) features an all-new light signature that incorporates the three iconic claws. This new front end merges the entire front grille and the signature part into a single object that also houses the sensors. It is made up of a single piece of glass with the logo in the centre, magnified because it is luminescent, with a 3D effect. This mask is crossed by three thin horizontal bars through which the three claws pass. The optical modules are housed under the glass mask, which is itself treated with a mirror effect. The latter is printed with INKJET digital technology.

Reflecting the new front signature, the stern below adopts a very high-tech treatment with the three claws that seem to enter the car infinitely, thanks to the two layers of glass, conferring a real magical effect. The stern shows off the subtle sculpting of the wings, marked by a simple line that flows into a fleshy curve.

The “AERORIM” wheels combine aerodynamics and aesthetics with brilliance. They are designed on an axial symmetry, just like the 408’s wheels. Forged textile inserts* contribute to the aerodynamic effort, while aluminium inserts with micro-perforations validate the very high-tech aspect of the design. *Forged textile: recycling of resin-impregnated fabric to form a hard material that can be used in structural parts.

The illuminated Lion emblem remains static when the wheel is turned. Inside the wheel, the brake caliper can be seen covered in mirror glass. This offbeat design aspect echoes the glass parts of the Hypersquare, the bow and the stern of the concept.

This view reflects the desire to offer occupants a new perspective on driving and travelling. In “delegated driving” mode, the Hypersquare and Halo Cluster disappear and a large screen rises from the floor, as in the e-Legend. Technically, the Inception Concept is based on the Stellantis Large platform and features two electric motors for a total power output of 680 hp. Its 100 kWh battery provides a range of 800 km.

This new front-end identity (Fusion Mask) was partly unveiled at the presentation of the 9X8 prototype (below) designed for the World Endurance Championship. The 9X8 not only unveiled this new front end for future Peugeots, it certainly inspired the Hypersquare steering module of the Inception Concept, which is close to the concept of the 9X8’s steering wheel with its fingertip controls… A Peugeot concept that draws some of its innovations from the competition, that is invigorating and gives concrete expression to the fresh air of this new Peugeot era! To complete this score, all that remains is to win the 24 Hours of Le Mans! 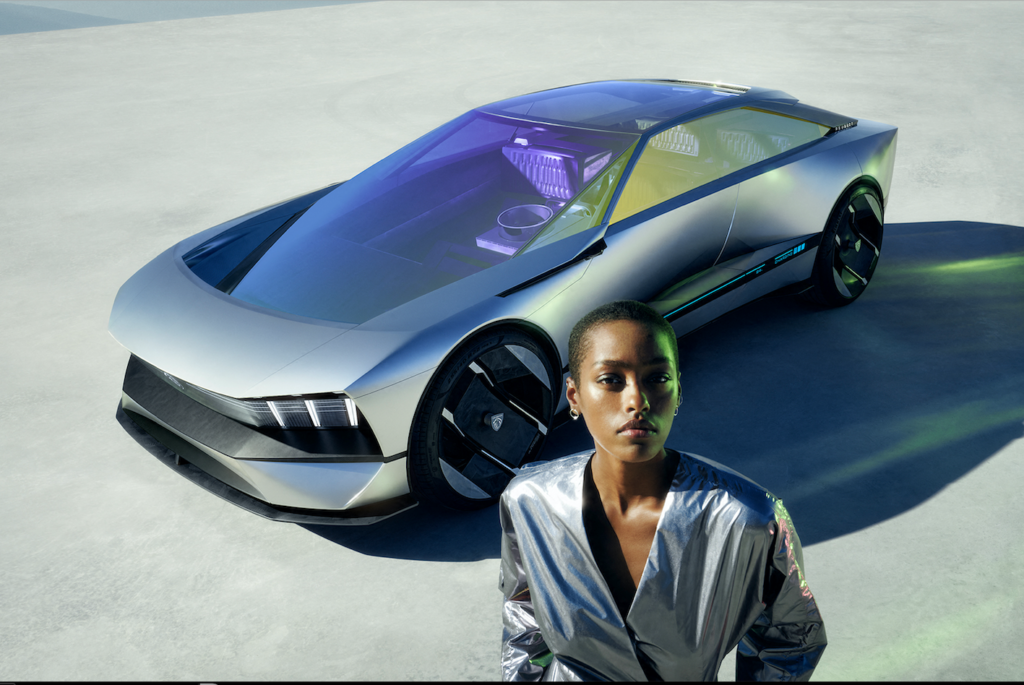