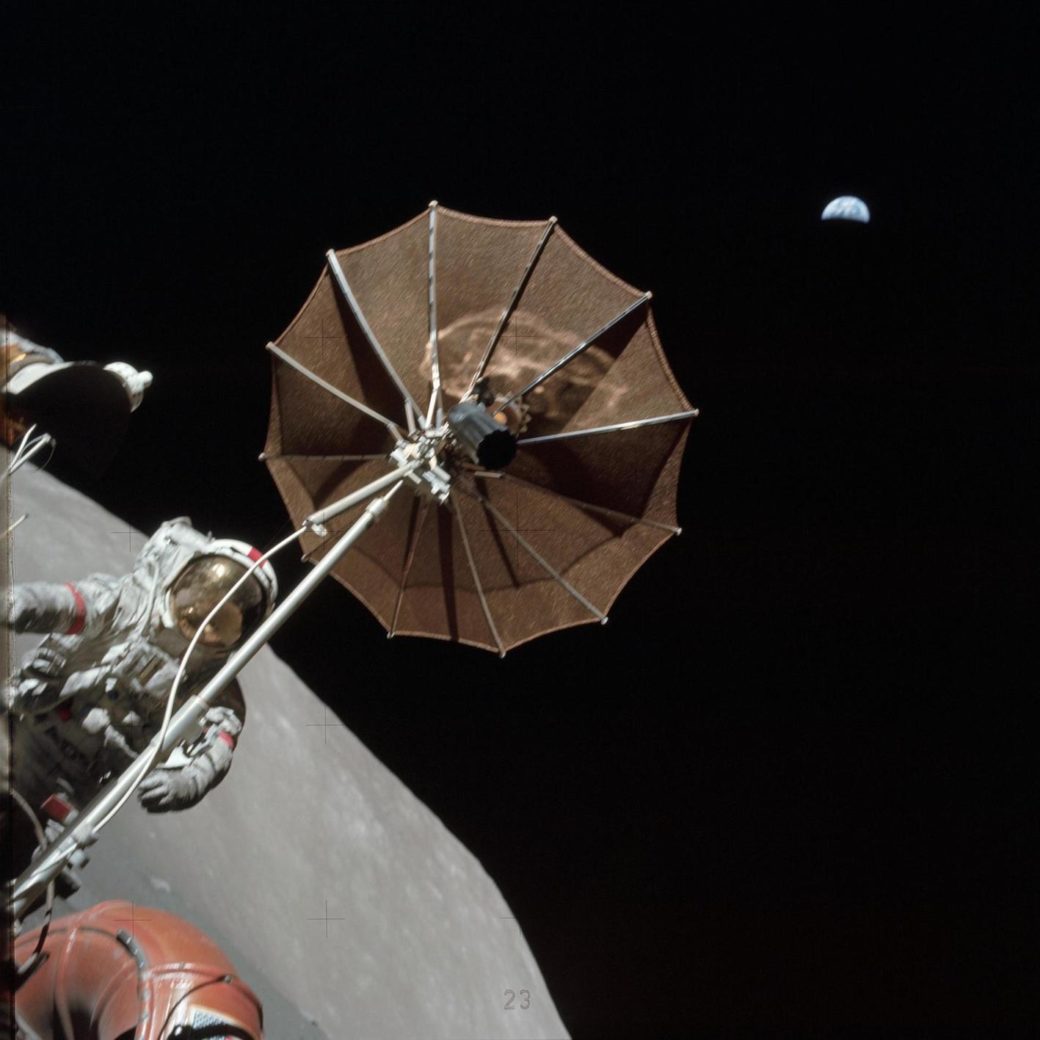 It is all very well (and logical) to celebrate the first of Man on the Moon. LIGNES/auto, on the other hand, celebrates the first turns of man’s wheels on our grey satellite !

The Moon can boast the smallest fleet of cars in the universe. There are three vehicles on our satellite. Three LRV “Lunar Roving Vehicle” designed by NASA to bring incredible lunar explorations to their peak, they have covered nearly 92 kilometers up there !

Alan Shepard and Edgar Mitchell are exhausted. The two astronauts of Apollo 14 walk slowly on the lunar ground. Their heart rate is accelerating. They searched in vain for the ‘Cone’ crater that they had to probe during their mission in February 1971. This is the first real lunar exploration during which the visited sites should allow us to discover the origin of our satellite. But here we are, between the maps taken by distant probes and those shadows that kill any notion of distance on dusty ground dotted with craters, the two astronauts struggle to orient themselves and do not discern the intended objective. Here they are already more than a kilometre from the module that allowed them to land on the Moon.

A kilometre walked, engulfed in their suits. They must now turn back as the director of the Houston mission imposes on them. Otherwise, they will lack oxygen. They then abandon this part of the expedition and return to the LEM. Even though they collect lunar rock samples when they return to the module, the two men feel enormous frustration at this failure. But the entire Apollo 14 mission remains a success in terms of the samples collected, 42 kg of which will be brought back to Earth. Later, back on the Big Blue, the surveys will indicate that Shepard and Mitchell were finally only… 75 meters from their objective. 75 m after a journey of 384,400 km, there is indeed reason to be frustrated !

A decision was then made in Houston: the Moon-boots were finished, and the lunar vehicle was replaced ! From now on, America will not only walk on the Moon, it will roll on the Moon to facilitate the exploration of our satellite. This lunar car has been in the market since the 1950s, even though lunar exploration is only a dream. After the speech of President J.F. Kennedy who promised the Moon in 1961, the development of a means of transport was validated for Apollo missions, and more particularly for the last missions up to Apollo 20. However, the aborted Apollo 13 mission (below) has contributed, with the reduction in the budgets allocated to NASA, to the cancellation of the Apollo 18, 19 and 20 missions, so we must act quickly.

The lunar vehicle was to be loaded on board the Apollo 15 mission in July 1971. The rocket that will take David Scott, James Irwin and Alfred Worden from Earth’s attraction will take this vehicle adapted to traffic on the lunar ground. A great first !

The unknown of the lunar ground

If Citroën with its 2 CV has invented the formula of “four wheels under an umbrella”, NASA will respond with its “four wheels under a parabola”. Parabola in the form of an antenna transmitting the videos of the explorations live on Earth ! But the operation is complex. The Lunar Roving Vehicle (LRV) poses a first problem for the designers of the Marshall Space Flight Center.

At the beginning of the program, they do not know the consistency of the lunar soil. Will the astronauts sink several centimeters ? And will the LRV sink into the depths of the moon? Several tyres were then studied while the analyses of the Surveyor probes sent around the satellite reassured us about the ground’s ability to support men and machines.

In parallel with the development of high-performance suits for astronauts, the idea of a pressurized cabin on the LRV is abandoned (above). Then the one of a heavy and cumbersome machine is also scrapped, because the Apollo missions will use only one rocket and not two as planned at the origin of the program: one for the equipment, another for the men. Everything in America that has companies capable of helping to design the LRV then collaborate on the project.

Nixon is holding up well

First Northrop – renowned for the design of its flying wings – and Grumman studied pressurized cab vehicles before they were abandoned, then Chrysler, Bendix, General Motors (to whom we owe the wheels of the LRV in particular) and finally Boeing. The last draft of the project was drawn up in 1970. It has already been a year since Man walked on the Moon… Eight models are assembled, two of them weighing only 35 kg, simulating the real weight of the vehicle on the Moon, for the various tests. Four LRVs were finally produced, three of which were used for Apollo 15, 16 and 17 missions.

The investment is huge : nearly $40 million. A part of the American people, with their minds turned towards the Vietnam War, are beginning to grind their teeth at their colossal expenses for lunar exploration, the results of which they do not necessarily understand. But in the middle of the Cold War, President Nixon is holding on. America will roll on the moon, successfully. And before the Russians….

BONUS: Everything you need to know to drive on the Moon

If you want to pass a lunar WE, you will have to pick up one of the three abandoned LRVs up there. Yes, they stayed there after the astronauts left ! The Lunar Roving Vehicle is 3.12 m long and has a wheelbase of 2.30 m. It is light : 210 kg, but on the Moon, due to the lack of gravity, it weighs only 35 kg ! The LRV folds in four, or almost. Its wheels fold down on the aluminium chassis to be loaded on board Apollo.

The “pilot” has a joystick adapted to his large gloved palms. In front of it, a multi-information screen allows to monitor the charge of the two zinc-silver batteries which allow a range of almost 100 km. Royal! You will not need to check the tire pressure. These consist of a wire mesh largely covered with titanium plates, an alloy also used for rims. Each wheel is driven and steered with a small integrated electric motor of only a quarter horsepower, but the gearbox adopts a ratio of 1/80.

Astronauts will sometimes complain of a failure of the “integral steering”, but the LRV still carried out its missions. The seats are similar in spirit to those of a 2CV and seat belts with a simple “Velcro” allowed astronauts not to be ejected when passing through small craters, at a maximum speed of 14 km/h !