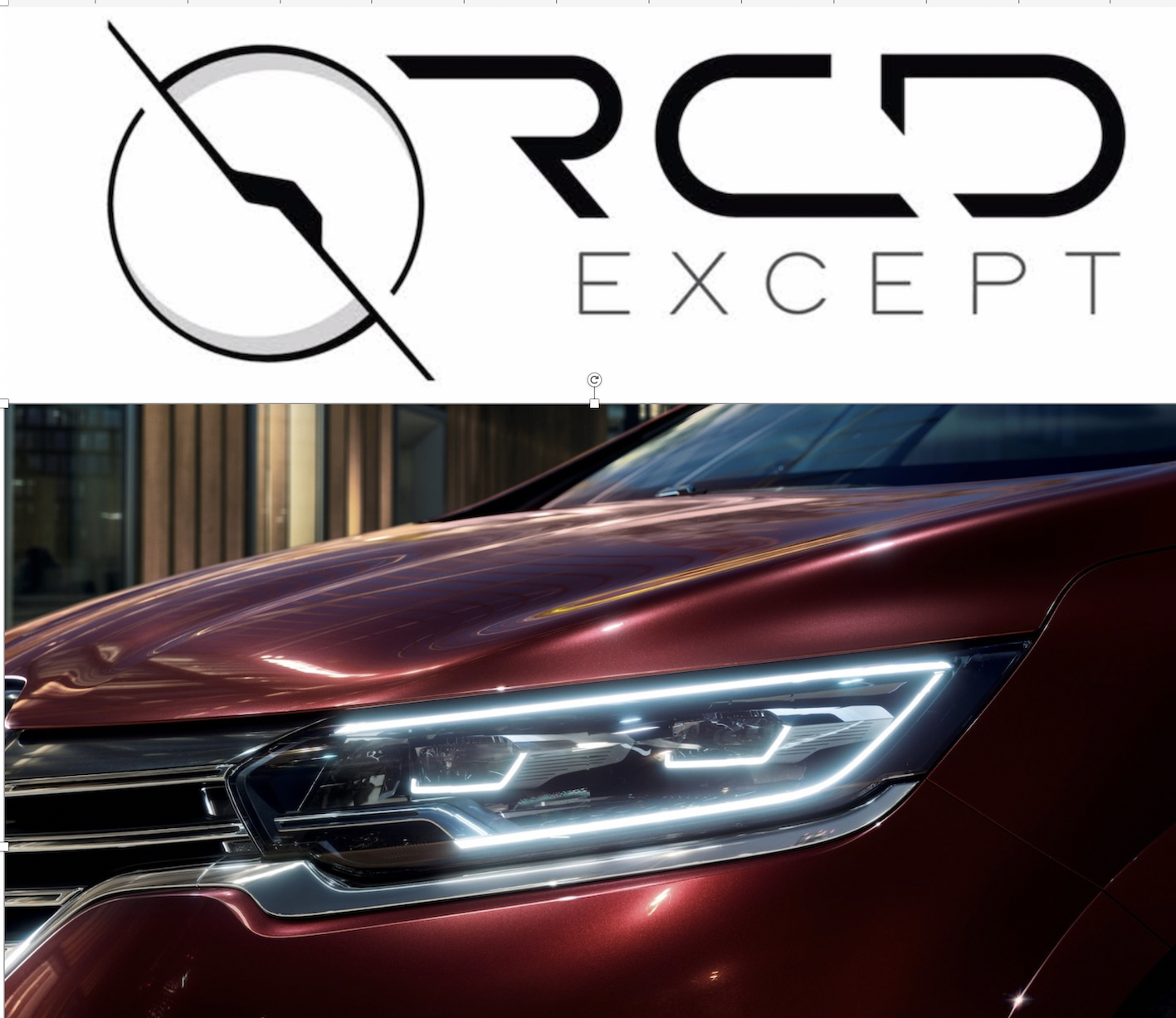 If you thought that the manufacturers produced all their products (production vehicles and concept-cars) alone in their impressive research centers, you are wrong ! They call on numerous subcontractors, prototype designers or others, who in turn do not hesitate to call on specialized trades to guarantee both the quality of the studies and the respect of deadlines. RCD, with its 209 employees and its seven worldwide sites, is one of them. Dan Abramson is in charge of design at the site located in Guyancourt, near Paris…. Renault and PSA.

LIGNES/auto: RCD, what is it exactly ?
Dan Abramson: “RCD was created by two partners in 1999. One came from Bertrandt on body and interior engineering projects, the other Jean-Jacques Thamie from platform engineering at Renault, notably on concept cars. When I arrived in 2011, there was no design department and no 3D imaging department. RCD then invested in these key positions and allowed my team of designers to be partly loaned to the manufacturers’ design offices. At that time, with Bruno Montbertin, we created RCD Smalldots to work on all the visuals in design imagery and HD images. Today the team has about 50 people.”

You lend designers to builders ?
D.A.: “When I was at Estech, I was appointed design director and we created a design office with a very professional team of about ten designers. That’s when we started to immerse some of them in the very heart of the design offices, especially at PSA. But the Estech adventure came to an abrupt end. In fact, Laurent Duchêne, Éric Perna and myself were forced to leave. Laurent and Éric were both taken by Style et Design, and I ended up in… nature! Laurent was our best salesman and Éric one of our best milling machines. But Style & Design couldn’t take over the whole team. At Estech, there was a period of technical unemployment…”

And you, where do you go then ?
D.A. : “I was contacted by RCD who also wanted to set up a design office, but at the time I didn’t have a team anymore! I started from scratch and I gradually built up a solid team, and I renewed the idea of “lending” some of our designers to manufacturers. I then placed some of them with PSA – they are still there -. In fact, since Duarte DCI and Estech, we have always been among the best teams of designers. “

How did you build your teams ?
D.A.: “I took the best of the schools, especially at Créapole where I was a teacher. I recognize a good designer only by looking at his hands and gestures! Jean-Pierre Ploué was happy with our teams and supported us, like Gilles Vidal. It should be remembered that Gilles was hired at Citroën by Arthur Blakeslee and that he was in my team at Vélizy!”
Créapole School : https://www.creapole.fr

Why do manufacturers use this type of subcontracting ?
D.A.: “Manufacturers, notably PSA, Renault and Toyota, have a great deal of development work being carried out in parallel. They therefore subcontract certain subjects which can involve the study of a platform up to a complete project. They also seek help in the design world. I remember that one of the first tasks when we were at Duarte DCI was to define the entire rear cell of the interior of the C5 station wagon and then to follow up on the Picasso project for South America. “

So your designers work for – and at – the manufacturer ?
D.A.: “Yes, it is our designers who join the PSA design offices. Today I have one of my former designers who is well placed at Peugeot and is part of the teams that deal with all the interiors: it’s Guillaume Daniel. Another, Guillaume Lemaître, works with the concept car team for Peugeot. And recently, another of my former designers, Kevin Goncalves, did the exterior design of the new Peugeot 208 (above). I’m proud of all these designers, even if I can’t name them all! At the moment, I have about 20 people from my design team working at PSA, and maybe 4 or 5 in the departments where they are working on the 3D Digital “modelling” and “Speedmodeling” concepts, concepts registered by our company.”

You also told me about the work carried out with Renault on the current Espace…
D.A.: “For the Espace, we made the shape drawing (or Class A) and delivered all this data to validate the “tooling voucher”. In fact, we received a 100% digital model and a milled base that has a certain level of maturity, we’ll say a little over 90%. With the evolution of the latest digital bases supplied by Renault, we gradually refine all the surfaces in collaboration with the manufacturer’s technicians who come here to deliver the final definition for the production tooling. Our Smalldots imaging team also produced the HD images of the interior and exterior for Renault’s communication department, images which were used for communication documentation and catalogues”.

Do you make scale-1/1 models for builders ?
D.A.: “No, that’s the role of companies like Estival or Protostyle with whom we collaborate. For example, we designed some of the elements of the Citroën centenary concept cars (below), for which Estival was responsible for the final production. In these cases, some of our engineering teams work in-house or travel to Estival. We therefore do not produce physical models (except for small-scale parts) because the manufacturer calls on subcontractors whose specialty – such as Estival – is to do this, who themselves will call on our know-how. Recently, we recently carried out a complete study of the seating area of a top-of-the-range aircraft for Safran, and the models were made at Protostyle, our partner on this project. We also sometimes produce high-tech models in Guyancourt for Valeo or the military.”

So you don’t make concept cars for manufacturers ?
D.A.: “No, we each have our own specialties and know-how. To design concept cars, you have to dedicate your company 100% to this work, with an imperative rigour in the timing, because very often, last minute worries or tight timing impose to multiply the teams with the risk of exceeding the budget and losing money.”

The RCD Group generated 2018 revenues of more than €17 million. The Group employs 209 people, including approximately 80 at the Guyancourt site, one of four French sites, plus three other entities in Romania, the USA and the UK. In France, the Guyancourt site is close to Renault and PSA and the Sochaux site is close to Peugeot. RCD Except has a wide range of activities: digital modelling (conceptual 3D modelling and class “A” surface modelling in particular) and feasibility studies. The development of concepts at an early stage also helps manufacturers upstream of their projects. Other RCD professions include graphic design, human-machine interface (HMI) design, brand positioning and color and trim style studies.

RCD also intervenes to achieve the perfect transition from the manufacturer’s digital mock-up to the manufacture of the tooling, but also for the validation of sets and finishes, the follow-up with suppliers and, finally, the validation of the CAD and first production parts. This theme, which takes a project to the factory gates, requires teams capable of achieving style/technical convergence. These teams take charge of the integration of manufacturing constraints.

Another department provides communication support, in particular for Airbus, process deployment support, implementation of statistical tools, not forgetting transnational training courses. At the end of the production cycle, the automotive novelty is then unveiled in official communication for which RCD makes its 3D studio available to manufacturers. Here, the graphic designers create high definition imaging, photo shoots for 3D integration or create digital models of high definition scale 1 aspect. It is then almost impossible to make the difference between these 3D views and reality!

RCD also plunges without restraint into the world of virtual experiences, with augmented reality, simulators and interactive virtual reality tours. In short, RCD specializes in all the trades that link certain car manufacturer subcontractors and the manufacturers themselves. RCD’s research strength goes beyond the automotive world, since boats, airplanes and military equipment are part of the panoply of projects carried out here, even though the automobile still accounts for 70% of the work.
RCD’s website Except: https://www.rcdexcept.com/fr/
CLICK ON THE PICTURE BELOW FOR DIRECT ACCESS

The long interview – Dan Abramson, 24 years of Citroën design is to be read below :