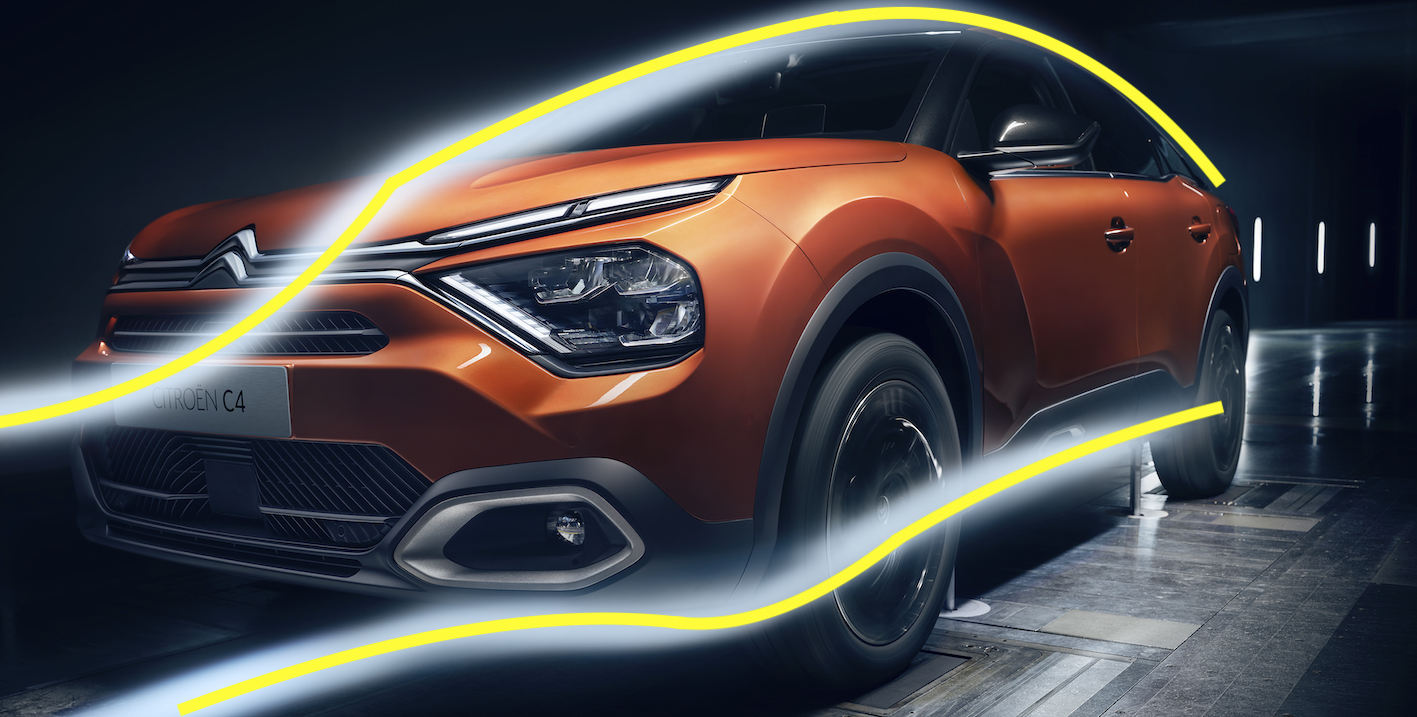 Here is the new C4, the anti-Golf, the anti-308, the anti-Megane, the anti-Ceed… In short, this is Citroën’s new compact sedan. Four years after the CXperience concept car, which announced the brand’s new style codes, and one year after the UFO 19-19, Citroën has finally decided to reinvest in the compact sedan segment. With a new design that we will decipher here…

In today’s communication, which is fairly light since the car will be fully unveiled on 30 June, Citroën refers to the GS, born in 1970 – half a century ago – and voted car of the year in 1971, and explains that its new, upgraded saloon is adorned with certain SUV codes.

It is attacking the market for C-segment compact sedans. “These compact sedans play a major role in the European market, accounting for almost 28% of C-segment sales in 2019“.

Technically, the new French compact car is based on the platform of the Peugeot 208, 2008, Opel Corsa or DS3 Crossback, and not on that of the future (and current) Peugeot 308.

This will enable it to have the famous multi-energy undercarriage with petrol or diesel engines as well as a 100% electric variant, the ë-C4 (above the 100% EV platform, below the ë-C4).

Without having seen it, but by closely detailing the official photos of the day, we wanted to decipher the rather strong design of this C4. However, there’s no substitute for the possibility of touching its shapes, assessing its proportions or caressing its volumes… Difficult period for the Covid, which unfortunately takes us away from the metal sheet, unfortunately… These judgements are therefore waiting to be confirmed once LIGNES/auto has seen the car.

Firstly, the silhouette of the Citroën C4 “manages to combine the elegance and dynamism of a saloon while subtly adopting certain SUV codes for more strength and character,” explains Citroën. Unlike the segment’s compacts, its roofline (in 1) is very slender, dynamic and flowing like that of a saloon in the upper category. Note the slight drop in the rear beltline (in 2), which is not reminiscent of that of the SM (which fell into the lap of the DS) but of the XM! The third side window is generous, unlike the one on the competition’s compacts.

This detail of the front wing stamping will have to be explained to us because it seems useless… Not to mention the fact that it walks on Peugeot’s flowerbeds with its theme of “triangulation” of the 2008’s flanks. Thinking on the spot: what’s the point?

The C4, above, like the recent proposals made on this CMP platform (208, 2008, Corsa), has a long, rather flat engine bonnet, giving it a more “automotive”, more virile appearance. The bonnet is very sculpted. It’s a definite departure from sedans that tended towards single-body volume, like the 2004 C4.

The style is worked out in detail. For example, above is the double chevron “Citroën” pattern, seen on the 2019 Ami One concept car, on the grille and on the rear lights of the C4.

The evolution of identity is not limited to the adoption of the double flared radiator grille blade. The LED are thinner, optics are embedded in a cavity with a much more complex shape than that of the current C3 or C4 Cactus, while a false air intake is located under the headlamps (in 2). The additional light at the bottom of the bumper is also located in a false air intake with elaborate contours. This “soft-nose” is so complex in its shapes that it is not made of a single piece, of course. The front grille bars are not made in one piece, so there are two fairly thin joints on level 1.

While we are very doubtful about the inverted “C” stamp on the front door, we applaud the work done on the rear wing. The stamping process involves changing from an almost vertical shape at the rear door (in 1) to an almost horizontal shape at the lights level (in 2).

The taillight: let’s talk about it, as it’s probably the most distinctive element of the C4’s styling. Its complex shapes are a good synthesis of the work that was intended for this C4: “Why make it simple when you can… …rework its subject!” Hidden in the curves of the taillight glass is the spirit of the CXperience’s fire. The designers also tried to recall the double flared front grille bar by implanting a line of light that escapes upwards. It dies at the level of the rear spoiler and the small black patch that allows the roof to appear to be in sustenance, not connected to the body.

To conclude, here’s an interesting angle that shows that the style of the C4 is anything but simple, if not easy! In 1, the aerodynamic aileron is integrated at the base of the window. In 2, as on the Peugeot models, there is a black transverse band. In 3, one cannot say yet if the base of the window is an opaque glass or if it is a non-transparent part. To see on the spot… In 4, as on the CXpérience concept car, a black part allows the roof to “float” without any link with the bodywork. In 5, the lights remind us of the double flared front grille. In 6, the lights feature a design that has been worked down to the last detail.

Reread the interview with Pierre Leclercq on his arrival at the head of Citroën design. Below