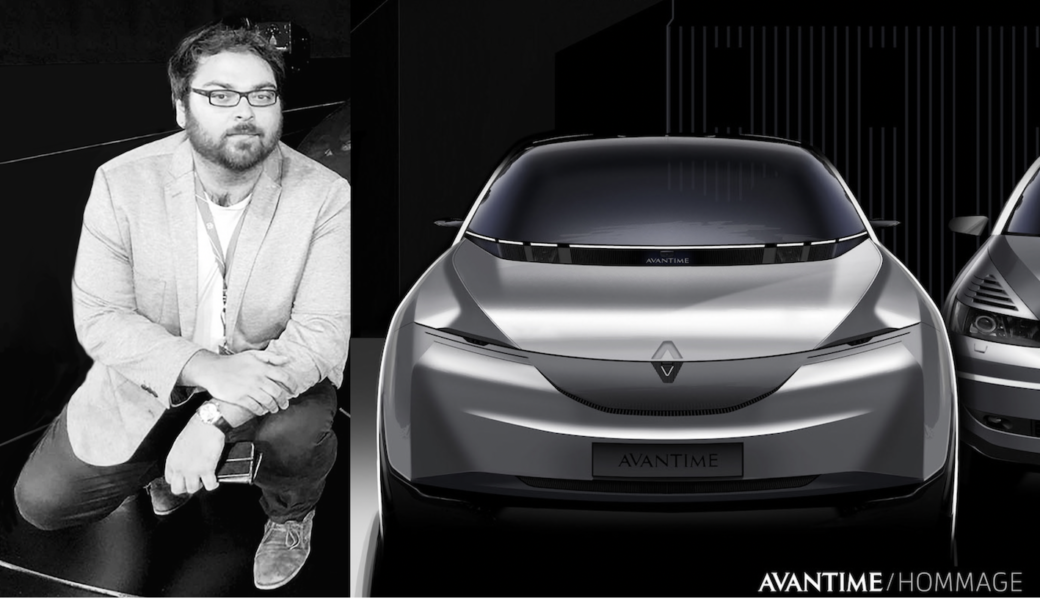 Did you like the Renault Avantime? Here is his reinterpretation seen by a young French designer working for a… Chinese brand !

He is a young – and already experienced – French designer, working in Munich for a… Chinese brand that tells us about a Renault he loved and still worships. France-Germany-Chine-France: the circle is complete! Christopher Giroux gave birth to a Renault Avantime Tribute during his holidays. He explains his approach to us. At the end of the post, you will discover his journey far from being classic….

Christopher Giroux: “This Avantime tribute project is a personal work done this summer, over a period of ten days. I have always found the late 1990s and early 2000s incredibly rich, with particularly bold and innovative products… The Avantime is a good example.”

“Since its commercialization, I’ve always liked its offbeat side. Time seems to prove him right because the Avantime now enjoys a great love rating, especially among designers.” Christopher thus pays tribute to the small team that worked around Thierry Métroz, then at Renault and author of the design of this extraordinary Renault, in the noble sense of the word. “Its concept seems to me today to be coherent at the dawn of the era of electric vehicles and more or less autonomous: a lot of interior space, an atypical profile with a very forward windscreen (which is what the integration of ever larger screens in today’s dashboards leads us to) while keeping a certain sporting side…”

“The purpose of my work is clearly to propose a current interpretation of the “coupé-space” concept that corresponds to the constraints I face every day on electric vehicles. I didn’t keep on my study some of the Avantime’s character traits that were too strong, like the stern with its stalled sound. However, by reinterpreting some of the Avantime’s themes, I am proposing a vision of what a Renault coupé-space of the 2020s could look like.”

“I wanted to work on Renault’s identity on the face beforehand, imagining what a new definition of the “Renault mask” could give. We do not find the grille since it would be useless, but the current codes very reworked: the logo is still connected with the “look” of the vehicle which are no longer the optics but the LiDARS, the sensors necessary for autonomous driving.”

“These new equipments become the real eyes of the vehicle. The logo is represented by a simple imprint in the hood, while the finer grille runs horizontally across the front. Underneath the manhole, there is a small graphic reminder of the front of the old Avantime, with its typical ventilation grilles.”

“I also worked on the “dematerialization” of optics, a subject that Renault has partly addressed with the EZ Go, Ultimo and even Symbioz concepts. Rather than combining them with the grille, they are placed at the junction between the windscreen and the hood to draw attention to the essential point of the car: its interior, not its engine. A spacious cabin that extends to a point far upstream of the vehicle.”

“This theme is found in the rear, where the lights are placed in transparent blocks, at the end of the car and not integrated into the tailgate or the bodywork. I didn’t keep the tailgate at the characteristic Avantime stall for pragmatic reasons, especially to maximize the space on board. Here, the “clean cut” is more marked by the rear light blocks which offer – in profile view – a clean cut to the bodywork. Finally, I reinterpreted the Avantime’s characteristic graphic theme with the “S” shaped C-pillar, but here offset by the side windows that incorporate an air intake.”

CHRISTOPHER GIROUX
-find it on Behance : https://www.behance.net/christophergiroux?tracking_source=search-all%7CChristopher%20Giroux
-his professional background : to be read below

“I have been a designer since 2015, when I finished my master’s degree at Strate College. So I followed the classical path, with an “applied arts” course from high school, then a BTS “Product Design” before joining Strate. During my time at Strate, I did several internships, one of which was at Heuliez. But we know what happened to the company…”

“After a stint in Detroit, at the CCS, and following my 5th year internship at Changan (a Chinese manufacturer also based in South America, Russia and North Africa) in Turin, I accepted a contract offer to join their studio. For a little over 12 months, I participated in the development of a small SUV, the Changan CS35 (above), with style proposals, digital development, and some work on the clay.”

“In January 2017, I was contacted by Byton (at the time “Future Mobility Corpration”) to join Benoit Jacob (*) in the studio under construction in Munich. Here, I participated in the development of the M-Byte concept car, the production version of M-Byte and above all, the K-Byte concept car, a sedan for which my proposal was selected. We developed it in a few weeks, between late 2017 and early 2018.”

“I worked with two of my colleagues, Clément Hoffner (who designed the rims, rear cameras and sensors on the roof) and Pierre Barut, in charge of the graphic part (animations in the grille, logos). After being responsible for the external design of the concept car, I continued to work on the K-Byte program for the production version until the end of this summer, as the company’s ups and downs unfolded…”

“The constant search for new investors to survive is a problem that all start-ups know well !”

“As for the way Byton works, it is quite similar to what I experienced in my old company, if not the resources! Not to mention extremely short deadlines with few staff and very tight schedules. In the long term, it’s quite challenging, but I’m experiencing real accelerated training! I have learned a lot in just two and a half years!”

(*) Benoit Jacob, French designer who designed the Renault Laguna 2, then the BMW M1 Hommage and especially the BMW i8, left BMW to join “Future Mobility Corpration”. He works in Munich, in direct collaboration with the studio based in China, Shanghai, as well as with the studio dedicated to UX/UI based in California.