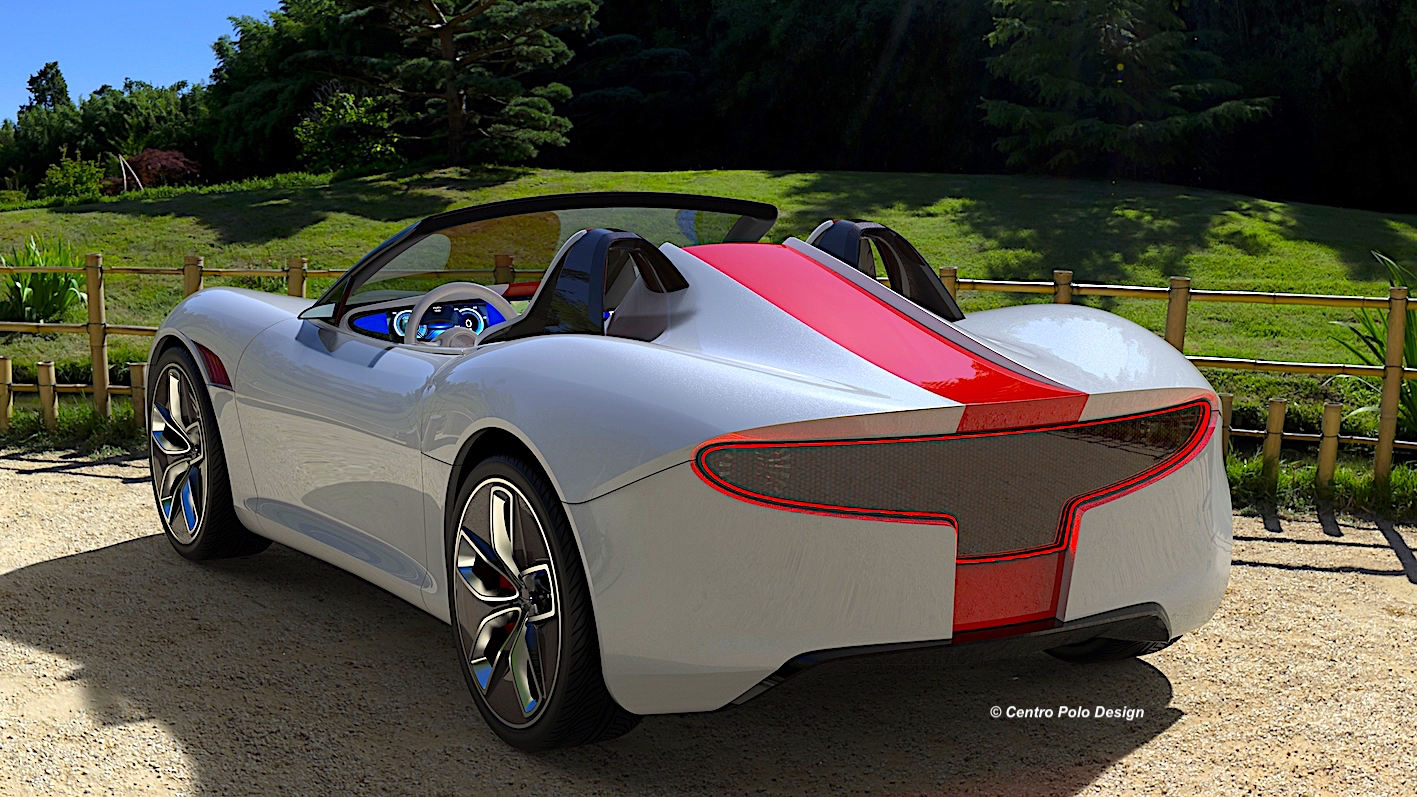 This project currently exists only in digital form. But it is already registered and protected because it contains a multitude of good ideas. This new vision of motoring pleasure gives pride of place to forgotten materials, such as… cork.

VERTEX: you immediately think of Vortex, those aerodynamic drag lines that can sometimes be seen on the back of F1.

Christian Polo, responsible with his partner for Centro Polo Design, chose this name for other reasons: “Vertex is the name given to the top of the Bézier curves I work with. ‘Vert’ (Green) refers to electromobility and ‘tex’ announces a new universe in terms of textiles for this project…”

Before talking about the new materials that make up both the body and the interior of this project, let’s talk about automotive philosophy. That of pleasure!

“With Vertex, I want to offer a pleasure car, essential, without any driving delegation.” From then on, the old-fashioned recipes are applied: 400 hp for less than 1000 kg. Old as the world? Not really, since the drive train is original to say the least.

“I’m in contact with an English company that develops electric motors integrated into the wheels. Each engine provides up to 100 hp, and therefore a total of 400 hp” Christian Polo specifies that his project, like a Tesla, will evolve over the course of its life. “As the evolution of this technology progresses, your Vertex will be able to do it just as quickly by changing… the wheels!”

The architecture is based on an equally well-known but revised theme: the hybrid aluminium and linen fibre chassis is of the “chassis-beam” type and integrates all the batteries in its central part. “This way, they are less exposed in case of a side impact.” A lower hatch could allow a quick exchange of the battery packs. The chassis is studied in partnership with a French engineering and design department.

Three silhouettes are already being considered. The idea here again is to update a concept, that of the modular car, as Mercedes did in 1995. A common structural base, receives a choice of three distinct upper parts, including the windscreens, unlike the 1995 Mercedes concept below.

The car is extremely compact with a length of 3.65 m and a width of 1.75 m. “It’s a footprint that’s similar to that of a Fiat 500 Abarth,” says Christian. Another innovation is the suspension, which makes it possible to raise the ground clearance to get on board or get off a slightly steep road. It should be noted that certain bodywork elements are symmetrical, particularly the door panels.

This symmetry can be seen in the black front and rear “crash box” that house the headlamps and lights. “These crash-box are real boxes and they can accommodate new lighting technologies during their lifetime.” Vertex evolves over time…

But let’s come to the major innovation of this product: the composition of its bodywork uses vegetable fiber. “I was inspired by the human skeleton and its bones. The body is made of linen fiber wrapped in a hollow, airy material made of cork.”

Linen fiber, which comes from Normandy, is woven like carbon fibre. It is recyclable, its technical qualities are close to those of carbon: boat hulls already use this material.

As for cork (above), Christian Polo went to Sardinia to work with specialised companies. “Cork is very fire-resistant, insulating, flexible, gas- and liquid-tight, anti-vibration, soundproof and very light…” In short, it has characteristics little known to the general public. Christian says that it can be glued to any material in the end. “It can also be affixed to any part of the passenger compartment or controls.“

On board, the linen fiber that makes up the bodywork becomes a decorative element, like carbon fiber. “I imagine an interior with these materials: linen, linen fabric, cork, cork leather and linen fiber…”

Vertex is currently the design office of Centro Polo Design, a French design office for chassis, Normandy for linen, English for motor-wheels and Sardinian know-how for cork. As always, funding has yet to be found to see this programme come to fruition. “Vertex is a philosophy. It’s an investment, like buying a timeless, top-of-the-range watch. It’s a community of spirit.”

“The idea would to be able to produce it together in three countries to boost their economies at my level: Normandy, England and Sardinia. Of course, this is a very small series, in the order of 1,000 units per year.” Such small quantities inevitably imply a cost, as does the development and choice of materials and original, different solutions. Vertex would thus be on the verge of €100,000. A sum, of course, but it is less than half of what you will have to pay for the future Tesla roadster…

BONUS: When FORD was testing a car in… cannabis!

Henry Ford was working in the biofuel industry, and in 1941 he built a prototype hemp-fuelled car with a hemp body. The panels were “plastic” made of 70% cellulose fibres, including industrial hemp, mixed with a resin binder. In short, a Ford with cannabis!

Hemp and marijuana come from the same plant, cannabis sativa, which is the Latin botanical name. Hemp is the fibre of sterile stems and seeds, while marijuana is made from viable leaves, flowers and seeds. We knew that cars sometimes smoked, but we didn’t know that we could have smoked them!