After ten years of a (pretty) reign at the head of Peugeot design, Gilles Vidal (below) has chosen to change air, but not era: he will continue to lead a team of designers for a French brand, Renault…

His successor as Peugeot’s Design Director, Matthias Hossann (below), is a pure PSA product, and began his career in the Group at Citroën. Since 2013, he has been head of design for concept cars, and is responsible for the incredible and sublime e-Legend of 2018.

So here he is since 72 hours at the controls of the Peugeot style. And he’s agreed to answer – already! – to LIGNES/auto’s questions.

LIGNES/auto: You’ve been sleeping well for three days?
Matthias Hossann: “It’s been intense these last few days! It’s a fairly new rhythm, but in the end it’s quite close to the rhythm of concept car management. I’m already thinking about what I want to achieve with the team. I’m already in this dynamic movement. I’m obviously honoured that this company, which is over 210 years old, is entrusting me with this position where I’m taking over from Gilles Vidal but also from Jean Pierre Ploué (*), Gérard Welter (below), all prestigious names.”

(*) Jean-Pierre Ploué joined Citroën in 1999, took charge of Citroën and Peugeot styling in 2009 before appointing a Peugeot – Gilles Vidal – and Citroën – Thierry Métroz – style director in 2010.

Were you surprised, as we were, by the speed of this change?
M.H.: “It’s true that it was quite rapid. It was Jean-Pierre Ploué who offered me the job. The advantage is that I know the house well, so everything has been fairly fluid, but it’s only my fourth day!”

Hossann ranks 59,847th among the most popular names in France, and the municipality of Schleithal has the most names. Eastern France: you were made to become a “Peugeot”!
M.H.: “In fact, I was born in Chaumont, in Haute Marne. So yes, it’s still the Grand Est region! “

Let’s talk about your training, you are a graduate of the Strate school.
M.H.: “During my studies at Strate, Jean-Pierre Ploué spotted me as early as 2001 and offered me the opportunity to complete my degree at Citroën. I was hired in August 2002 and since then, I have worked for all the group’s brands. Above all, I was lucky enough to spend five years in China, as part of a small team sent there to set up the Shanghai studio in 2008.”

Is that when the Metropolis concept car was born?
M.H.: “Yes indeed. Metropolis is actually my first concept car as a designer. This international experience is in addition to my experience with the three brands.”

Gilles Vidal has successfully renewed the brand’s identity and style. Is it simpler or, on the contrary, more complicated to take the lead in a business that is doing rather well?
M.H.: “It’s a great challenge, first of all personal, but having accepted this role, I clearly have the ambition to do even better with the teams. Is it complicated to take the job at this time? I would say that I have an advantage: I know the team very well…”

You’re changing dimensions. I mean, in concrete terms, you’re managing a team that’s nothing like a concept car team in terms of size?
M.H.: “In the concept car structure, there is a hard core of 10 to 15 people, a core that grows when we move on to production with the subcontractors. Peugeot design, for its part, involves 130 people with a variety of jobs.”

The genesis of a concept car is about a year. A mass-produced product is four times as long. It’s a real change in time dimension!
M.H.: “I’m lucky enough to be able to rely on a strong team, which has built today’s successes, to respond to these differences in temporality. I have confidence in them! The advantage of concept cars is that you learn to work with them in a fast way. The idea is to continue to breathe this dynamic into the product universe. The current context shows that we need this flexibility and speed. We will continue to accelerate in design.”

The concept car universe is still far from the one of the series?
M.H. : No, not so much. Apart from the industrial constraints of course. What we have always claimed at Peugeot is that a concept car is never free. Elements developed on concept cars have found their way into series production, such as the handset prefiguring the i-Cockpit, derived from the Quartz concept car (above) that we found in the first generation of 208s. We have always worked by building bridges between the world of concepts and that of the series, whether at the level of on-board technology or formal language. It’s all going to be quite natural in the end.”

By entrusting you with the keys to the Peugeot style, has Jean-Pierre Ploué given you a new direction to follow?
M.H.: “Jean-Pierre Ploué, like Jean-Philippe Imparato (Peugeot brand boss with Gilles Vidal below) and Carlos Tavares want Peugeot to keep pushing and are giving me ‘carte blanche’ to go even further in terms of design. It’s a great opportunity… »

What card will you play between continuity and rupture?
M.H.: “You understand that there is continuity in the team and I need it to continue to be extremely creative. It’s out of the question to go in the direction of Russian dolls! I want us to remain very dynamic from a style point of view.”

Carlos Tavares has given each brand an international zone to invest in: India for Citroën, China for DS and the United States for Peugeot. Are you going to dedicate a team of designers to this programme?
M.H.: “It’s true that this future presence has been announced, but there will be no dedicated team for this programme. In fact, it’s the same reasoning as when we arrived in China, where we were making specific products. This is no longer the case today. All of the group’s products have the same design in all world markets. We have learned a lot from the Chinese experience, we have mutated our designs to take into account local specificities, and I think this will be done in the same way for the American market. What’s interesting about this operation is that we’re asking our creative teams to have an international dimension.”

Given the constraints of standards and manufacturing costs for small urban vehicles such as the Peugeot 108, how can we imagine a sustainable future for them?
M.H.: “These are questions we are working on today. Cities are changing, sometimes closing down and asking questions about individual freedom of movement. Historically, Peugeot has been involved in this “soft” mobility, I am thinking in particular of cycles.

Indeed, the question is what type of object can respond to these new uses. A first answer has been given with the 208 /2008 electric. As a designer, we are working hard on this. The standards are restrictive, but there may be new things to invent between the quadricycle and the real car, to create a new mobility experience.

M.H.: “Oh, we can even go back to the electric VLV from the early 1940s! So, within the brand, we’ve been asking ourselves this question for a long time. It’s part of the brand’s DNA. So obviously, the team is working on this theme.”

As for the concept, the minivan’s concept has finally come to fruition! Can you imagine it rising from the ashes?
M.H.: “I wouldn’t ask the minivan question from that angle. I’d rather talk about the technology, with our new multi-energy eVMP base.

It will create the opportunity for more space on board. These new technologies will naturally give rise to new silhouettes with which it will be necessary to really think about “user” and “new uses”. The world is changing! »

Closer to home, there is the final link in the renewal of the range, the 308 that we imagine for 2021. Have you been involved in this project?
M.H.: “That’s where it’s interesting because I was in charge of the concept cars, with this rather distant vision, but I also had an intermediate vision which consisted of working on all the projects in advance of the phase. The first projects we worked on with the team were the 208/2008.

It’s not about style at this point, but rather about posture. For example, we’ve completely reconfigured the mass balance on 208, with a receding windshield and a more dynamic silhouette. So, with the teams, I worked upstream on all future products.”

The e-Legend concept car inaugurated a new logo. Will it soon be seen in series?

M.H.: “I can’t answer this question because a concept car is first and foremost a laboratory, and I’m demanding on that. So I want all the details, right down to the typography, to be treated as experiments. We worked on the logo in this sense to explore different avenues. »

About e-Legend not being followed by a production vehicle: If Opel manages to produce a “Monza” coupé (above) on its side, are you getting harakiri?
M.H.: “Clearly, I’m still projecting myself into the future, and what we are asked to do is to have fun, not with a specific shape, but with every single model. For the group, it is obviously necessary to industrialize products that are desirable, but also profitable. This was not the case with e-Legend.”

You are a lover of Simon Sinek, an unshakeable optimist who believes that together we can change the world for the better. So I join Peugeot in changing the world: give us back an RCZ for a better future!

M.H.: “Of course, all designers dream of this kind of product. We’re not ruling out anything; we have to find the right equation to offer this type of vehicle to our customers. Today, we’re focused on the profitability of each silhouette, rather than offering a profusion of variants, some of which are not profitable. Let’s focus on improving future products in the range, in terms of design, quality of workmanship and the user experience .”

Interview by Christophe Bonnaud, Thursday 30 july at ADN PSA. The author would like to thank Matthias Hossann for his availability during this busy period, as well as Jean-Pierre Ploué and Stéphanie Cardine from Peugeot Design Communications.

To find out everything about Gilles Vidal’s arrival at Renault, click here: 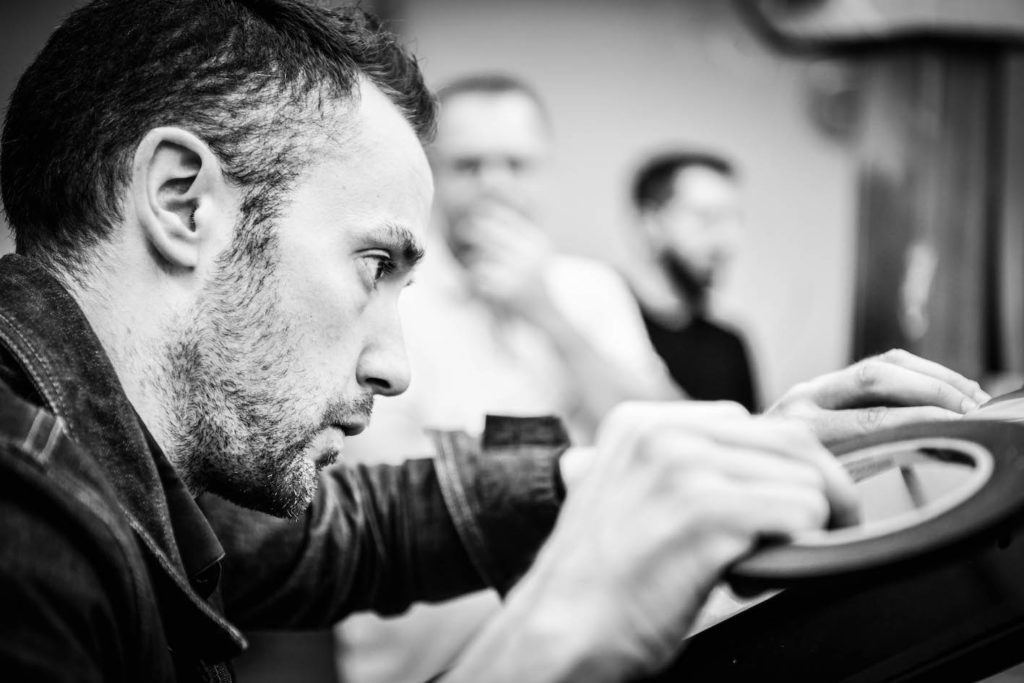