For the Volkswagen Group’s communication, Ralf Brandstätter, Chief Operating Officer of Volkswagen Passenger Vehicles, explains the idea of the “new Volkswagen” which was conceived after the dieselgate. He also reviews the launch of the Golf 8, its two plug-in hybrid versions, the sacrifice of the Phaeton and does not believe in SUV-bashing….

“To understand how “New Volkswagen” was created, you have to step back in the fall of 2015,” explains Ralf Brandstätter. “The economic situation of the Volkswagen brand was not excellent: our products were not profitable. And the central regions had been in decline for years. The brand had to invest urgently in the technologies of the future, but it did not have the means to do so. Volkswagen quickly needed a substantial plan to survive the crisis.” A solid plan for the future… “With the strategy of our Transform 2025+ plan developed at the time, we wanted to bring the “new Volkswagen” to life.

And then the diesel scandal shook the company….
Ralf Brandstätter: “Yes, that’s right. We all knew that it was not just a violent earthquake. It was a rash that swallowed us up. Today, there is a threat of fines, lawsuits in the billions, and lasting damage to our most important asset : the trust of our customers. What started as a fundamental crisis, finally became a catalyst for Volkswagen’s transformation.”

What were the main decisions taken at the crisis meeting in autumn 2015 ?
R.B.: “The electrification of our vehicles was the only reasonable way to achieve the CO2 targets without diesel engines. We knew that it would be useless to simply electrify our MQB platform and the models that cover it. We would not have been competitive, especially in terms of costs. The idea of the 100 % electric MEB platform (above) was then born. The elimination of the combustion engine, transmission and so on has given us a completely new architecture for vehicles designed on this new technical basis. Now, with the MEB, we can offer the interior space of a Passat in the exterior dimensions of a Golf, we can increase battery capacity and keep costs low. The MEB platform therefore offers our customers real added value. For this to be possible, even with the available resources, severe cuts had to be made. For example, the Phaeton was abandoned.”

You talked about a difficult economic situation in the fall of 2015. What have you done in concrete terms to finance this necessary transformation ?
R.B.: “The first phase of our “Transform 2025+” strategy concerned the radical restructuring of the company. To increase profitability, we launched the SUV offensive (above). By 2025, Volkswagen alone will expand its SUV range from eleven to more than thirty models worldwide. By that time, every second Volkswagen vehicle will be an SUV. Our strategy for the future has also contributed to the restructuring in Germany. We have improved our productivity and significantly reduced our fixed costs. We have already achieved almost three billion euros in cost reductions by 2020. We have also initiated economic recovery in key regions such as North America, South America and Russia. By next year at the latest, we will have reached break-even point. “

Volkswagen has therefore indirectly taken advantage of the most difficult period in its history, after the diesel crisis, to finally become stronger, better and future-proof ?
R.B.: “That’s what I hope. With this “New Volkswagen”, we are reinventing ourselves while remaining loyal to our brand. But one of the most important lessons we have learned from the diesel crisis is that we need a different corporate culture. We have therefore initiated a fundamental cultural change. I am convinced that we will only regain the trust of our customers, dealers and society as a whole if we treat each other with honesty and decency in the company.”

Two completely new compact cars (ID.3 and Golf 8) will be launched on the market in the coming months. Why do you offer a 100% electric vehicle and a combustion vehicle almost at the same time ?
R.B.: “There is no contradiction. For a long time to come, we will need both: internal combustion engines and electric machines. The presentation of the new Golf remains a special event. It is the best-seller and the reference in the compact segment, the favourite car of many people all over the world. And we want to keep it that way. The new Golf will continue the story.”

The Golf will also have its electrified versions ?
R.B.: “Yes, the eighth generation will have a range of state-of-the-art engines and will contribute to environmentally friendly mobility. This includes an electrified gasoline engine – a light hybrid – used for the first time in the Golf. In addition, there will be two plug-in hybrid variants with which the Golf will have a range of up to 60 kilometres in 100% electric. ID.3 can cover distances of up to 550 kilometres in purely electric mode. The two cars are for different customers. »

The Volkswagen Group now also offers its 100% electric MEB platform to other automakers (*). What’s the idea behind all this ?
R.B.: “The MEB platform must become the standard for electric mobility. On this basis, we make individual mobility CO2-neutral, safe, comfortable and accessible to as many people as possible. These costs can be considerably reduced by distributing this platform as widely as possible, resulting in significant savings. I am confident that our SEM will become the standard in the electric automotive industry. With it, the Volkswagen brand aims to become the world leader in e-mobility by 2025. We then want to produce one million electric vehicles per year. This is the cornerstone of our strategy. “
(*) Ford should eventually use 600,000 SEM and components of this platform.

You say that ID.3 is the 3rd icon of the brand after the Beetle and Golf….
R.B.: “It’s a figure of speech! With the Beetle, we have created individual mobility for everyone. For the first time, families could go on holiday in their own cars. It was a whole new feeling of freedom. With the Golf, we have democratized new technologies. Something that customers could only afford in the luxury class before, we have introduced it into the different generations of Golf – like ESP and ABS in series production. The Beetle and Golf have shaped Volkswagen’s DNA all over the world. The same will apply to ID.3. Volkswagen is on the road to emission-free mobility for all, it is our compass that determines our activity and motivates us greatly !”

BONUS: the offensive of the Volkswagen ID family

In the 100% electric offensive led by Volkswagen, the new Volkswagen ID.3 will play the role of a pioneer. By 2025, the brand will launch more than 20 purely electric models on the market. ID.3 will leave the production plant in Zwickau at the end of 2019 for marketing in spring 2020. Shortly thereafter, the SUV ID. CROZZ (ID.4 presentation camouflaged in Frankfurt) will follow. Then will come the successor of the Combi (ID. BUZZ) and a large sedan silhouette, ID. VIZZION. By 2023, the Volkswagen brand alone will invest around nine billion euros in electric mobility.

Bonus : the first generation of the VW Golf : 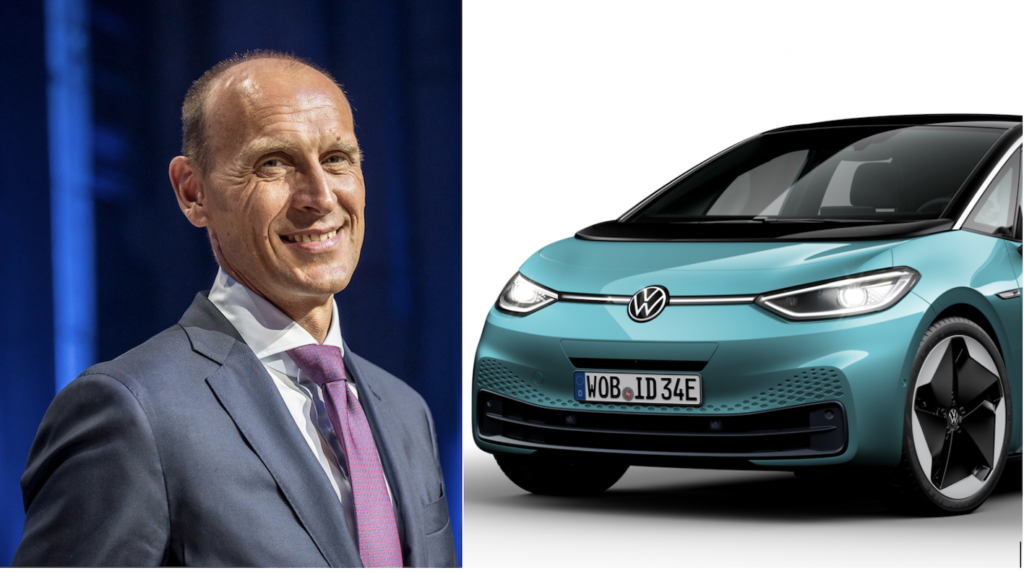