Deconfinement is taking place all over Europe with fears and doubts.
But here and there, as we saw last week with the gradual resumption of production in France, and yesterday with the announcement of the resumption at Porsche on May 4, the production plants will come back to life.

Let’s go back over a few documents from the Mercedes archives for a time sequence that pushes the doors of yesterday’s factories of the German firm.

Above, the Benz & Cie factory in Mannheim-Luzenberg. This view of the finishing shop dates from 1910. It was during this period that the famous “Prince Henry” race took place. Prince Albert Wilhelm Henry of Prussia, brother of the German Emperor Wilhelm II and a fervent motorist, presents the winner with a 13.5 kg solid silver cup representing a passenger car. The winners are Fritz Erle on Benz in 1908, Wilhelm Opel on Opel in 1909 and Ferdinand Porsche on Austro-Daimler in 1910.

Above. When people talked about the Benz & Cie plant in Mannheim, they were mainly talking about the Mannheim-Waldhof plant. This is the real heart of Benz production with the body shop. In 1910 it was the largest of the manufacturer’s three production plants.

Above, the space available for the assembly of the cars of the German brand was at the time praised as much as the assembly process. The Mannheim plant was erected in 1907 and inaugurated in 1908, six years before the First World War…

Above, let’s take a leap in time and stop at the Sindelfingen factory, with the assembly of the “Strich-Acht”, the W114/W115: the six-cylinder for the W114 and the four and five-cylinder for the W115. They were produced from 1968 to 1976 and remain the last ones in Mercedes history to be designed by Paul Bracq. Everything was new on this model. Paul Bracq left Mercedes when the car entered pre-production in 1967. Note another work of the French designer alongside the W115: the Pagode!

Above, the factory in Mannheim will take over the manufacture of the buses, as here in 1970 the model O 302. It can be seen that the assembly process for buses differs little from that for passenger cars .

But of course, the pilot and contemporary Mercedes factory (above) remains the one in Sindelfingen. It will produce the replacement for the W114/W115. Here we are in 1974, for the production of this new W123 sedan which will be marketed from 1975 to 1986.

Above, let’s move to the factory in Bremen. We are in April 1978 to see the production of the W123 series estate cars. This series, all models included, will be produced in more than two million units! A real success for Mercedes, especially in terms of reliability.

Above, back to the Sindelfingen factory, but this time in 1982. The W123 generation on the right is in its second restyling, while the W201 series, the very famous “small” 190, makes its debut alongside its big sister! Below, this same 190 still as a model. 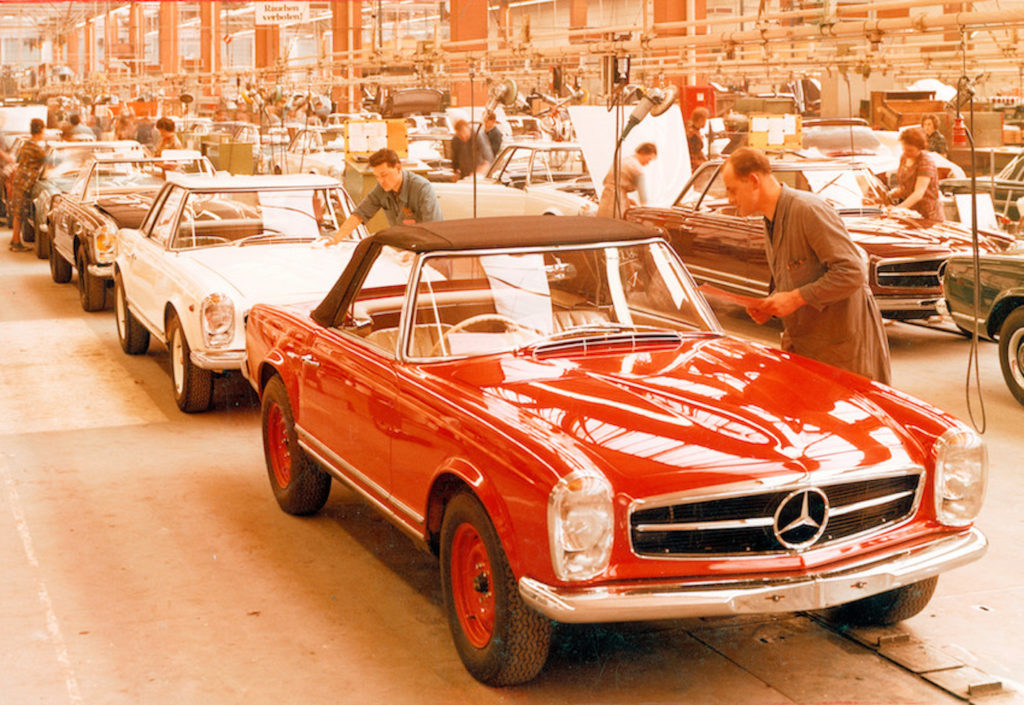