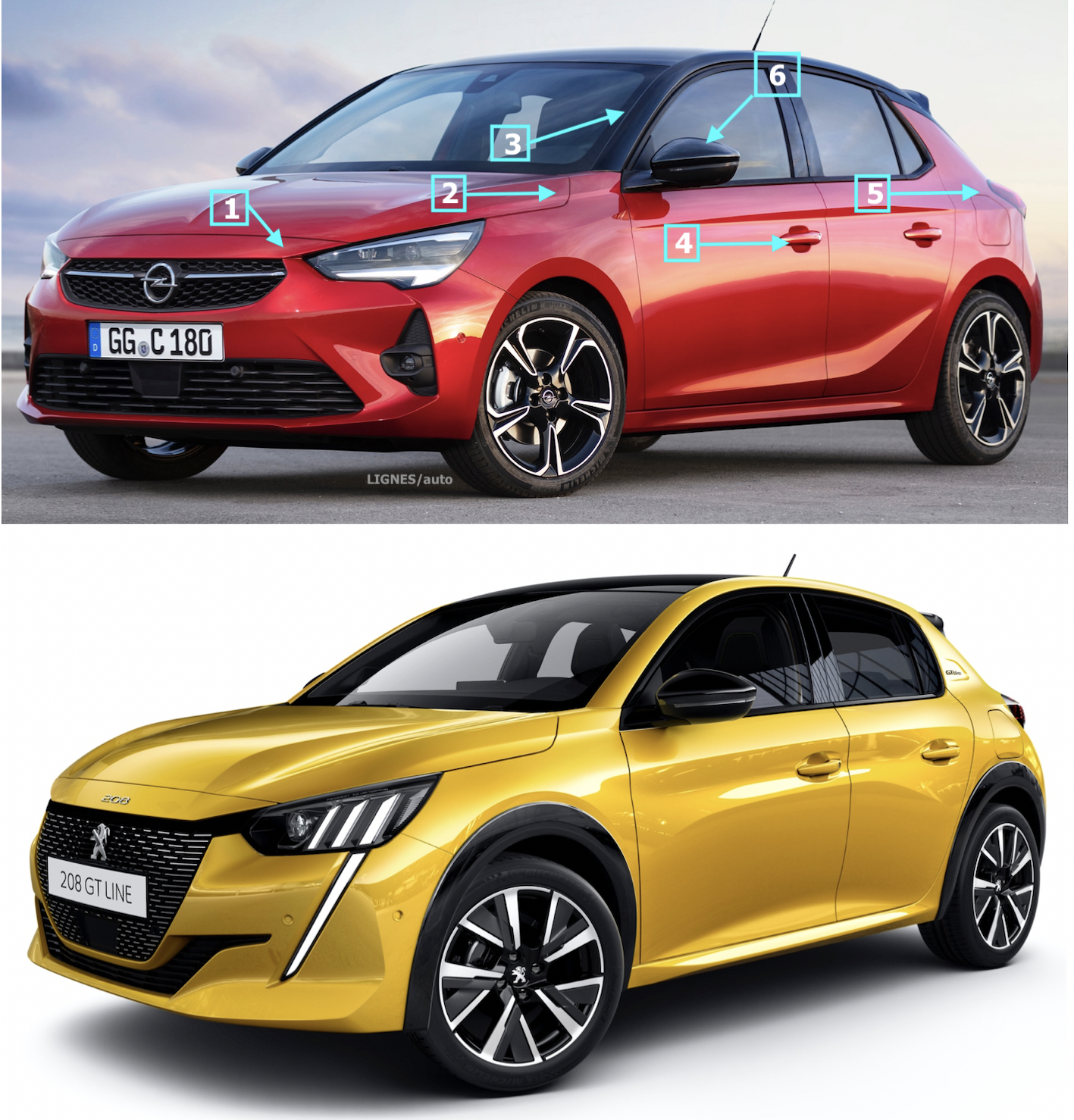 It is no secret that the 2019 Opel Corsa has been completely redesigned after the German manufacturer was taken over by the French PSA group. And it was necessary to act quickly, as his external designer, Martin Schaufler, remembers (see his interview on this site). The Opel design team was able to recover the CMP platform on which the 208 is based to redesign its design project.

No wonder then that the two rivals are finally endowed with the same proportions, the same dynamic stature and that, as a result, the Opel has scrapped the monocorps aspect of the first internal study of the German manufacturer (*).

The PSA Group’s CMP platform (above) was inaugurated by the DS3 Crossback. You can discover this technical foundation by (re)reading our post here: http://lignesauto.fr/?p=5201. Like all platforms on the automotive planet, it imposes unavoidable technical points that inevitably have an impact on style. Opel designers therefore converged on the same options as those chosen by Peugeot for its 208, because both cars are based on the same theme of the dynamic sedan.

Of these two 3/4 AV views, we found six points that imposed some constraints on Opel designers:
1 : the “soft-nose” shield is imposed on the Corsa. Its layout and size are similar to those of the Peugeot, only the shapes are changing.
2 : the hard point of the windscreen, which is totally unavoidable because it is linked to the body structure, forced Opel to take up the theme of the autoclave hood, which is identical – at this point – to the 208’s hood.
3 : The “A” pillar of the windscreen and the windscreen itself are identical to those of the 208, because at this level, the structure of the hull is similar on both cars. The Opel therefore opted for a drastic reduction in height (minus 48 mm), identical to that of the Peugeot : 1.43 m.
4 : The door rabbetings are identical, hence the handles are placed on the same plane.
5 : The rear lights of the Corsa, high perched, are installed at the same level as those of the 208. Undoubtedly a mutualization at the wiring level as well.
6 : The layout of the mirrors and the mirrors themselves are strictly identical.

1 : the black rush that separates the body colour from the roof colour incorporates the aerodynamic deflector. For a Corsa without biton tint, this rush remains black lacquered to maintain this dynamic appearance.
2 : Unlike the Peugeot 208, the rear door window is not vertical. What the Corsa loses in accessibility, it gains in dynamism with… a panel that takes the shape of a shark fin. Like on a DS3!
3 : the characteristic feature of the style of the Corsa’s flanks is found in this sculpted and slightly wave-shaped edge line, designed to accentuate the dynamism.
4 : Whether on the front or rear bumper, as here, the additional headlights (AV) or retro-reflectors (AR) are vertical and pushed to the maximum on the sides to visually widen the car. The Corsa is 2 cm wider than the 208.
5 : the rear crossbar of the 208, which is very far forward on the passenger compartment to reinforce the dynamic effect, has been retained on the Corsa. The fin is as imposing as on the 208, for a Cx of only 0.29. It should be noted that to reach this figure, some Corsa have a blackout grille with active flaps.

The PSA Group’s CMP platform, currently shared by the DS3 Crossback, Peugeot 208, Peugeot 2008 and Opel Corsa, does not impose its rules only outside the vehicle. On board, too, the Corsa is immersed in an architecture similar to that of the Peugeot 208…

1 : the structure of the windscreen pillars integrates the space for HPs on both cars. This whole area is identical on both Peugeot/Opel hulls.
2 : as on the 208, the stylists pushed the dashboard as far as possible on the doors in order to visually widen the cabin.
3 : first big difference between the structure of the two dashboards, the aerators are positioned at the top of the screen. Advantage with Corsa for ventilation, 208 for easy reading of the screen.
4 : the second major difference between the two dashboards is the 208’s i-Cockpit concept coupled with its small steering wheel. Corsa retains a traditional instrument implantation.
5 : the Corsa’s steering wheel can be heated !
6 : the door closing handle is integrated into the armrest on the Opel, while it is naturally more prehensible on the 208.

Finally, on the technical side, the two cars resting on the same platform have similar engines. The Opel also adopts, on some versions, the 8-speed EAT8 automatic transmission (below).

(*) During his interview with LIGNES/auto, Martin Schaufler told us that he had not worked on the first proposal for the Corsa project before PSA’s arrival. However, he told us that the architecture of this project, which had finally been abandoned, partly reflected the monovolume spirit of the current Corsa.