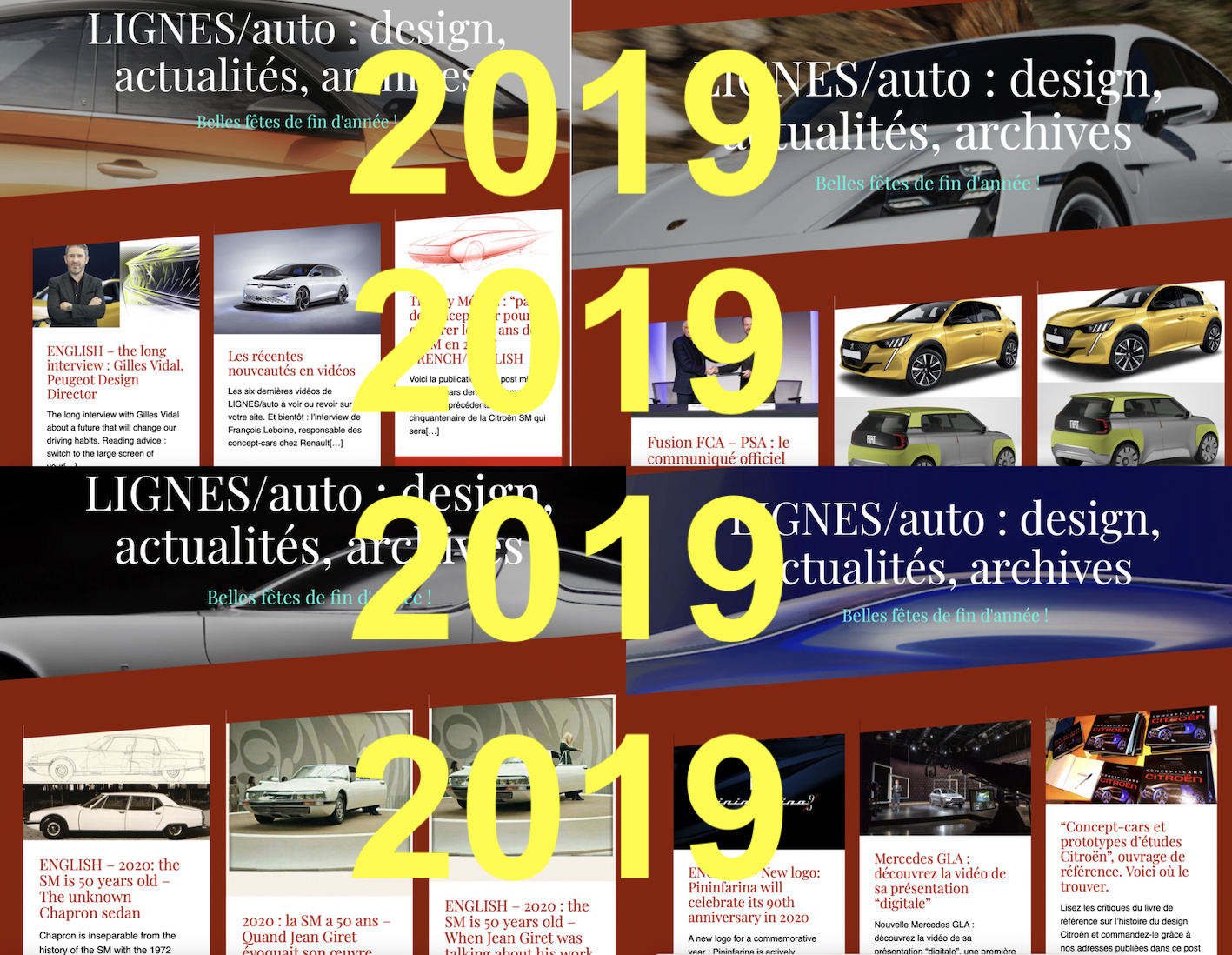 A look back at some highlights of 2019, before turning the page on 2020, a year rich in French innovations and, why not, in “transfers” of designers ?

When LIGNES/auto is on the front

The transfer of the year, in addition to that of Karim Habib (see at the end of the post), is of course the arrival of Pierre Leclercq at the head of Citroën design. He settled down at the end of 2018 and in 2019, a few weeks after his arrival, the designer received us in an office that LIGNES/auto knows well, formerly the office of J.P.Ploué and Alexandre Malval. Your site goes further by detailing the backstage of the transfer, and goes back to the early days of the career of this new Citroën style boss, officially the 9th since the Bertoni era of the 1930s.

LIGNES/auto has been looking for Carlos everywhere….

Since we are talking about Citroën, the 2019 event was obviously the brand’s centenary. Last July’s rally was exceptional (again, congratulations to the organizers) and there was only one absent: the boss, Carlos Tavares. Regrettable….

Our on-site report gave rise to a short video. More than 1400 views for this short film LIGNES/auto (below), it is (almost) Nirvana. However, a few zeros are missing to cross the borders of the “politically visible”. We’re working on it…

The nuggets of LIGNES/auto

The writing of books on automotive design brings to the surface documents that are sometimes unpublished. We know a lot about Marcello Gandini, but we didn’t know yet his proposal for the X29 project that would give birth to the Renault 25. This model has a little bit of a Citroën BX feel…. Subject to (re)reading below :

Each post (published in French and English) on the site is relayed by Twitter and Linkedin with, in the latter case, a distribution to a mainly professional audience, close to the world of design. But LIGNES/auto, it is also since this year a Facebook page (here: https://www.facebook.com/lignesauto/?modal=admin_todo_tour) which proposes shorter topics and often different from those of the site. This photo of the first plaster model of the XM, taken at Bertone in 1984, attracted more than 10,000 people… A nice score for this page that is starting.

The nuggets of LIGNES/auto (bis)

Over the months, since its creation, the LIGNES/auto site has published a few unpublished articles and accompanied them with the short story that has made the great automotive history. Here, the plan of a Citroën SM four-door, a print made in 1970 at Chapron, and it is not the Opera’s !

Subject to (re)reading below :

Another nugget, Peugeot’s A7 project, known, even if the angle of this subject raises questions : was this ancestor of the 204 killed by the 404? Immerse yourself in this short and surprising story !

And then there are the nuggets that come from the manufacturers, such as the booklet on the first 50 years of General Motors, from 1908 to 1958.

When LIGNES/auto is surprised !

The DS brand is conquering the market. As a youngster, it takes time to establish a long-term presence in the premium market. To accelerate this implementation, if not in sales, then at least in the dynamic perception of this brand, one would have hoped that it would be inspired by BMW’s communication. In 2021, the German manufacturer will produce its first 100% electric vehicle of a new generation, the iNEXT, an SUV located in a template between the X5 and X7.

BMW communicates on this amazing vehicle and even publishes photos and videos of the first copies on the prototype lines, with a nice staging ! (below). Why shouldn’t DS go out there and show all its ambitions, by presenting (in any way) the future compact SUV (or DS4 sedan), which would reassure potential buyers of these expected models, as they generate volumes ?

Below, watch the video of the assembly of the first prototypes of the future BMW iNEXT 2021.

When LIGNES/auto is driving on the Moon

LIGNES/auto, it’s a slightly offbeat site (like its editor, so…) While everyone is celebrating this year the 50th anniversary of Man’s first step on our satellite, your site tells you rather the story of the lunar car that will finally only have completed three missions.

The development of this funny device described below is illustrated by the original NASA photos.

Without betraying too many secrets that are not, the editor-in-chief of LIGNES/auto spent three years on the other side of the fence in a large automotive group, as head of the prospective competition watch unit. In this respect (among others) he fell under the spell of… platforms : their importance, their gestation, their lifespan, their impact on the strategy of automotive groups. They are a priority in the success of these groups.

LIGNES/auto was therefore surprised by the limited media coverage of Audi’s announcement of the creation of a brand new platform for 100% electric vehicles, the PPE.

LIGNES/auto takes the opportunity to explain the VW strategy and why so many platforms in the VW group’s electrical offer ! To be read below :

When LIGNES/auto makes you talk….

The richness of the world of automotive design is as much the women and men who gravitate to it as the products that are born (or not) each year. The particularity of LIGNES/auto is to make these women and men speak with long interviews relayed on the site, on Twitter, on Linkedin and on the Facebook page. All in all, the best audiences, all categories combined, are attributed to these interviews. The most widely read interview is that of DS’s brand, Sabine Le Masson Pannetrat, who is ahead of Gilles Vidal (Peugeot). CLICK ON THE PICTURE TO READ THE INTERVIEW

Find all the interviews by simply typing “INTERVIEW” in the “SEARCH” box of the “MENU” located at the top left of our homepage.

During the presentation of the Taycan, the first 100% electric Porsche sedan, LIGNES/auto does not just talk about its design. Your site also reminds us of the essential role of the ten bosses in the brand’s history….

When LIGNES/auto finds the Volkswagen ID.4

In the video of the Volkswagen communication, which recounts the genesis of the group’s first 100% electric compact sedan, the ID.3, we can see a brief moment of a digital image of the platform. But this one is identified as SUV. Is it really the MEB base of the ID.3 or rather the next ID.4, a compact SUV based on this famous modular MEB platform ? Find the report below :

Announcing Karim Habib’s transfer to Kia is real information. But go further by explaining how the position became available and tell the true game of musical chairs that led to this change at the head of design Kia world is another story…

A story that the LIGNES/auto website tells in detail, below :

When LIGNES/auto has a nose !

Many of you are not really validating the choice of a BMW style with increasingly gargantuan grille. Here again, LIGNES/auto goes further, and goes back in time, to the origins of the German brand to better understand the successive evolutions of the manufacturer’s identity. Instructive….

Go back in time with us with this chronology of BMW “nostrils”, below :

BONUS IN THE FORM OF A APPETIZER

You will be informed of the subscription date which will allow you to access this book for the price of 70 €, instead of 89 €, from the end of next January. There will be some new ones. Hint: Our greetings card below….