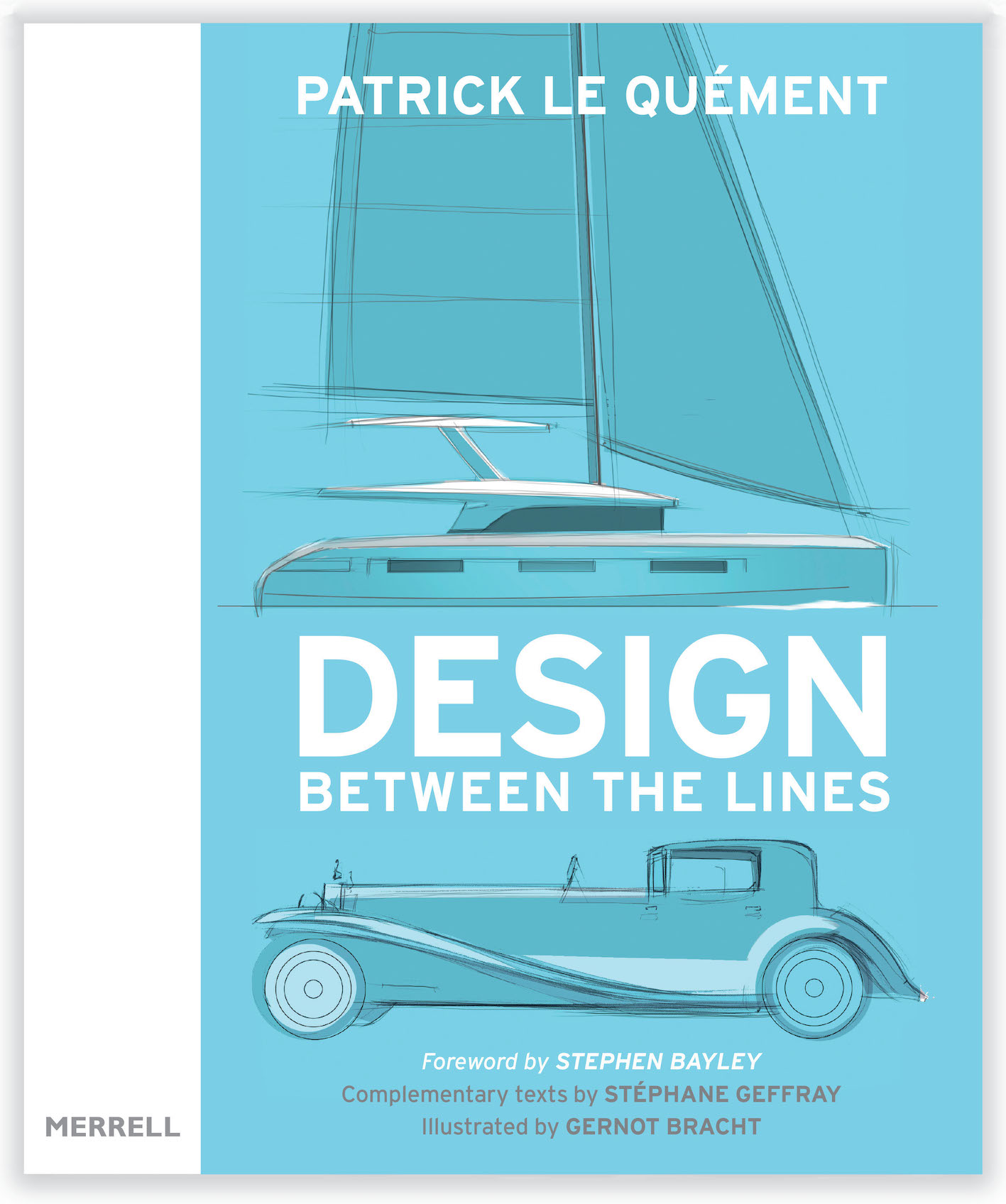 LIGNES/auto had announced it to you, Patrick Le Quément evokes his career as a designer – but not only – in a 224-page book available to order (see at the end of the post).

This book is illustrated simply and elegantly by a hundred drawings by  Gernot Bracht and written in collaboration with our colleague Stéphane Geffray. Le Quément deals with all the periods of his life, his encounters with great designers but also and above all, with great bosses. He does not hesitate to mock some habits taken by this particular environment, and develops his reflections until 2019 and his new adventures as a naval designer ! 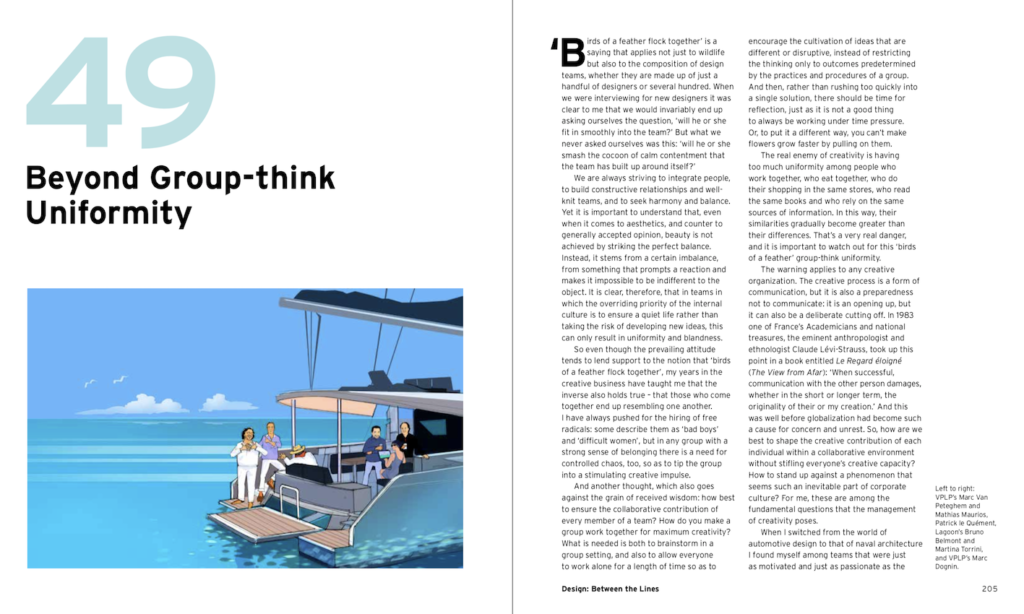 In short, a book that immerses you in the world of a design boss, with the joys of the profession and the difficulties of sometimes imposing good ideas; this book is only available in English, but even with a low level of proficiency in this beautiful Shakespearean language, you will manage to understand the small subtleties of this world by reading “Between the lines”. 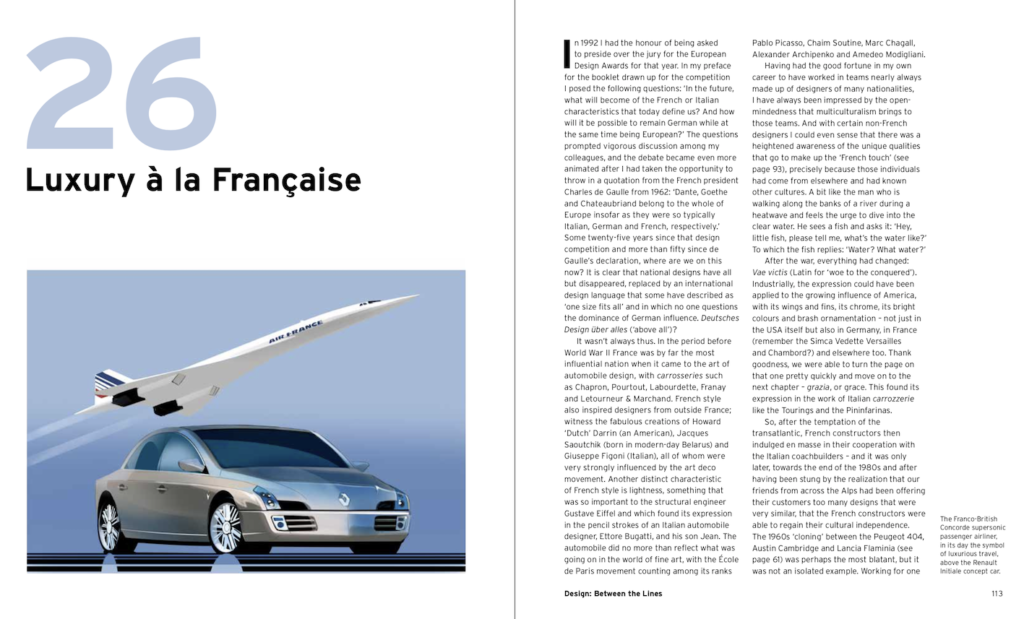 “Good design is really intelligence made visible and, according to the formula, it is 95% common sense and 5% of a mysterious, even magical quality, which is best explained by the emotion that aesthetics triggers. We are talking here about the whole entity. An iPhone is attractive as a whole, thanks to its shape and materials, as well as its intuitive control solutions and high quality graphics, which have made it a spectacular success. A good design makes you want to touch it ! »

“One of the greatest distinctive qualities of French automotive design has been its ability to propose new concepts adapted to their time, either because they are attentive to the spirit of the socio-cultural times or because they anticipate the desires and expectations of customers. As a nation, the French have developed a strong revolutionary tradition : Fabio Filippini, former design director at Pininfarina and who worked at Renault for some time, justified “that in France, there is something noble about being a revolutionary”. 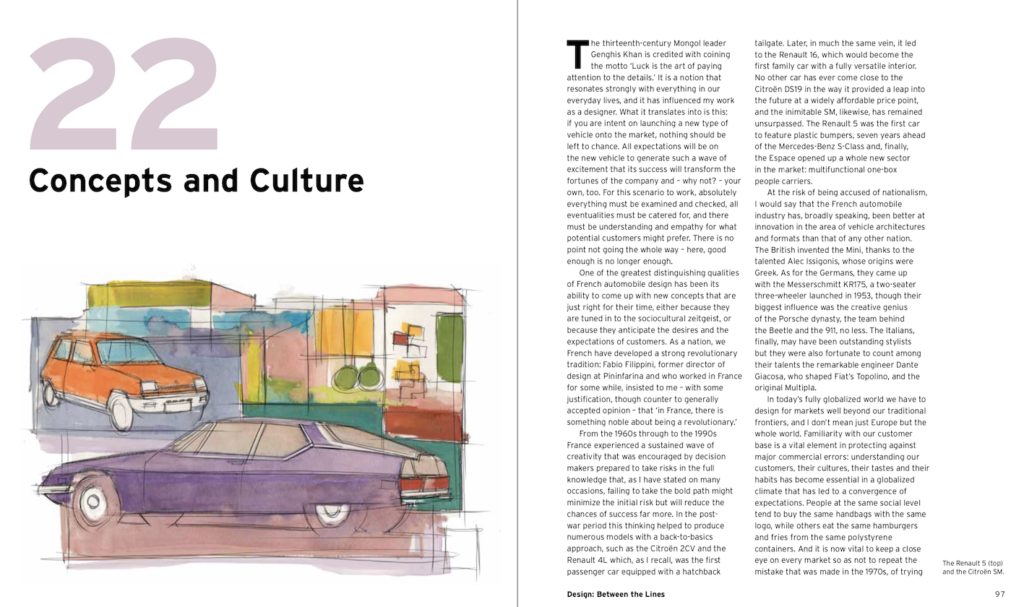 And the French manufacturers were, revolutionary ! “The Renault 16 will become the first family car with a fully versatile interior. No other car has ever approached the Citroën DS19 to make a leap into the future at a largely affordable price, and the inimitable SM, too, has remained unmatched. The Renault 5 was the first car to be equipped with composite bumpers, seven years ahead of the Mercedes-Benz S-Class and, finally, the Espace opened a whole new segment on the market. At the risk of being accused of nationalism, I would say that the French automotive industry has, on the whole, been more innovative in the field of automotive architecture and concepts than any other nation. » 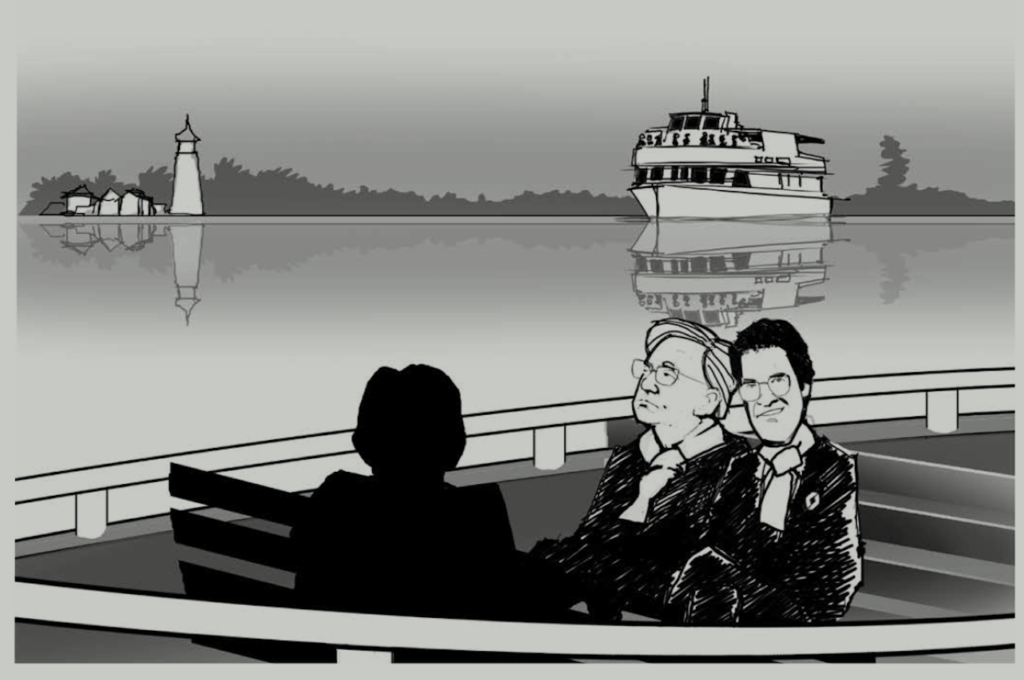 All the periods of his life are covered in this book. His arrival at Renault where Patrick Le Quément probably avoided… a designers’ strike as he tells it. “On June 1, 1985, while at Ford, I made the decision to change my mind at the next opportunity. Two months later, I resigned because I had accepted an offer from the Volkswagen-Audi group. As there was not much to do in the studio in the meantime, I accepted an invitation to represent Ford Design at an international conference organized by a major American supplier based in Saint Paul, Minnesota. It was there that I met two senior Renault Style executives, Michel Jardin and Jean-François Venet, who had also come as representatives of their organization. Two years later, when Gaston Juchet, head of Renault Style, decided to retire, a brilliant engineer emerged as the candidate to replace him. But the real designers were worried about seeing a non-designer in charge of the design centre : so much so that they threatened to start a strike ! This is how the meeting convened by Aimé Jardon, head of product development and number two at Renault, came about, at which my name was proposed. Was it luck or fate? Maybe a little bit of both… » 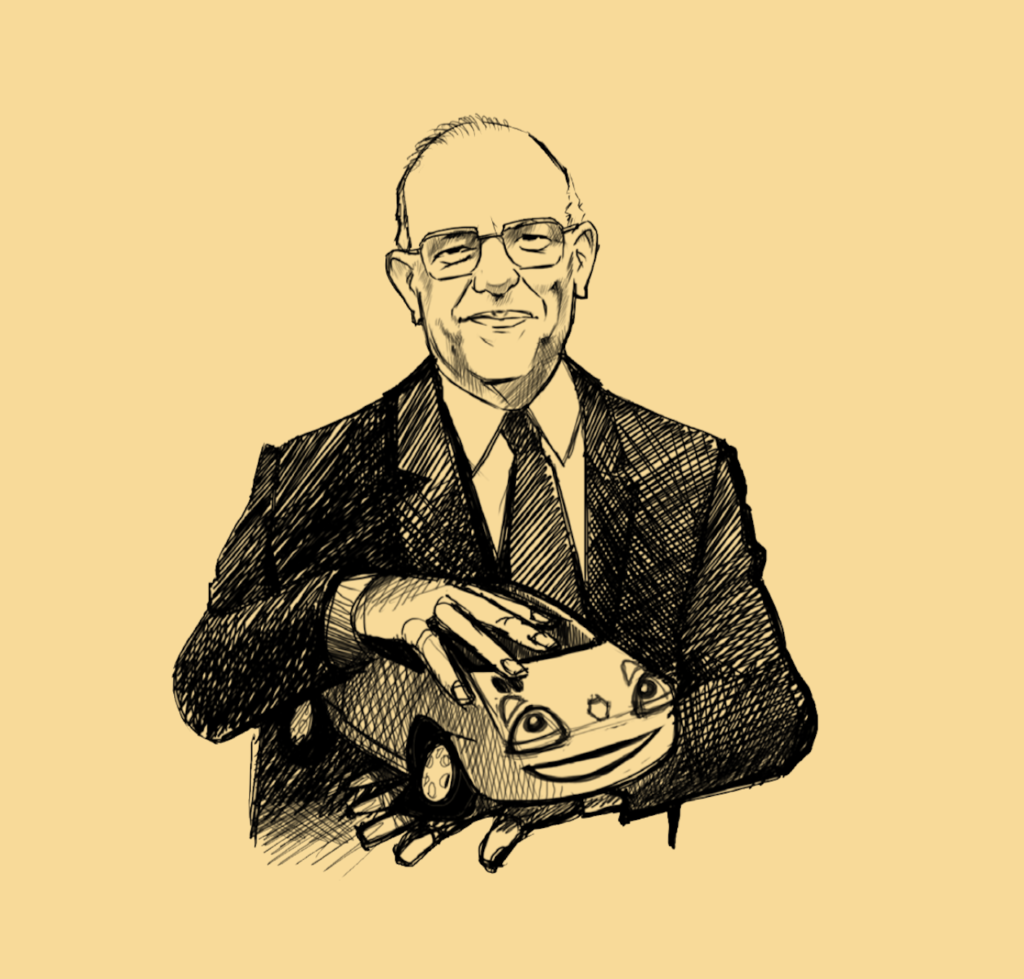 Raymond Lévy, then head of Renault, said “yes” to the Twingo. However, it was not won…

His meeting with Raymond Lévy in 1987 : “It was his home and we met to discuss my entry into the company. I was living in Germany at the time and was preparing to become the very first design director of the Volkswagen-Audi group. I was immediately struck by Mr. Lévy’s animation and sense of humour. What impressed me the most was the clarity and foresight: his vision of what my role could be in this great undertaking. The conversation focused on Renault and its heritage as a very innovative brand in terms of vehicle concepts, some of which have changed the game. (…) Lévy had not only accepted my only condition, namely that the design division would report directly to the company’s general management, rather than being a subset of engineering ; he had also promised me ‘carte blanche’ to create an industrial design division, whose mission was to help Renault reposition itself as a manufacturer of revolutionary vehicles. »

Exhumation of the Twingo : “In December 1987, just before Gaston Juchet retired as head of the Styling Division, he gave me the keys to two closed garages. Two design proposals for a small car program that Georges Besse had cancelled due to low profitability were stored in these wooden box. I brought these models and was immediately seduced by the potential of one of them. This proposal, although far from complete, was the work of a brilliant young designer by the name of Jean-Pierre Ploué, under the direction of the late Jean-François Venet. This project was a little undersized and had a rather ugly nose, but its one box silhouette gave it an unequalled interior space and a remarkable feeling of freshness. With the support of product manager Jacques Cheinisse, we were able to convince Lévy to set up a team from the engineering division to establish the technical feasibility of the project and start transforming this small object into a smart – and profitable – car. The meeting of major projects was far from convincing, despite all the efforts made by the talented program director, Yves Dubreil. But then, after showing the model to Lévy and his team and explaining to them that this car should be considered a family pet, that people wanted to take inside to bask in the heat of the fireplace, Lévy quickly understood the metaphor and smiled. To which the model responded with his own smile. » 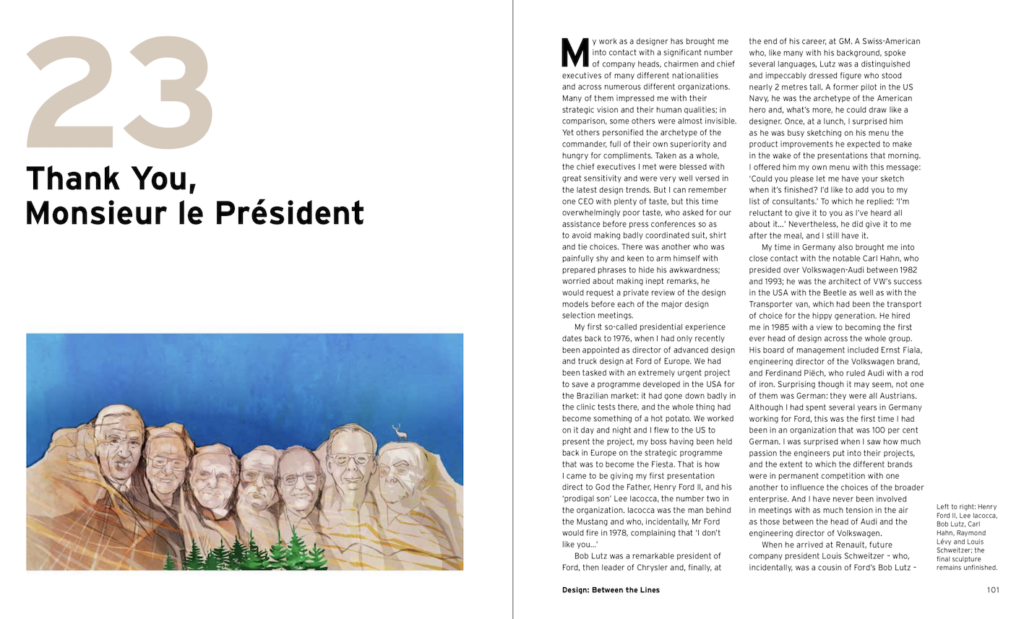 Twingo, always…” Later in its development, we tested our car, the Twingo, in marketing clinics where several hundred people were invited to evaluate it against competitors’ vehicles. The results were very clear: 25% loved the car, and 25% said “yes, maybe”, implying that they didn’t want to be the first to go there. The remaining 50% were openly hostile. When these results were presented, I found myself confronted with a group of senior managers who insisted that the Twingo’s caricature style be changed and that the satisfied smile be erased from her face. I opposed this argument by saying that the 25 percent of people inspired by enthusiasm seemed to me to be a good basis for success, while the only thing my opponents had clung to was the 50 percent negative response. I went to the south of France for a long weekend to get some perspective, and when I got back I sent Lévy a short handwritten note in which I asked him to choose an “instinctive design” rather than “extinctive  marketing”. He returned it after attaching it: “I agree with you 100%, Mr. Director.”  This is how Raymond Lévy led Renault on the path of innovation ! ” 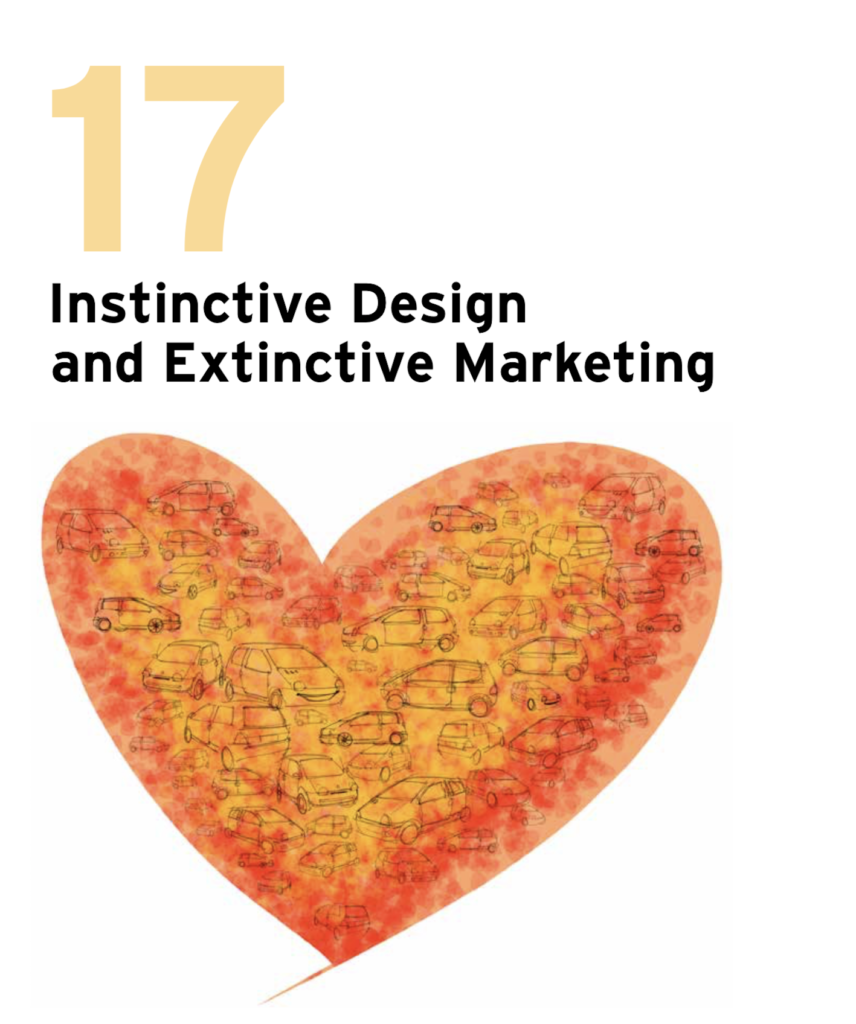 One of many bosses : Carl Hahn : “My stay in Germany also put me in close contact with the famous Carl Hahn, who chaired Volkswagen-Audi between 1982 and 1993; he was the architect of VW’s success in the United States (…) He hired me in 1985 with the aim of becoming the first head of design for the entire group. Its board of directors included Ernst Fiala, technical director of the Volkswagen brand, and Ferdinand Piëch, who led Audi with an iron fist. Surprisingly enough, none of them were German : they were all Austrians. Although I spent several years in Germany working for Ford, this was the first time I was part of a 100% German organization. I was surprised when I saw the passion that engineers put into their projects and how the different brands were in constant competition with each other to influence the choices of the company as a whole. And I’ve never been involved in meetings with as much tension in the air as those between the Audi manager and the Volkswagen technical director. » 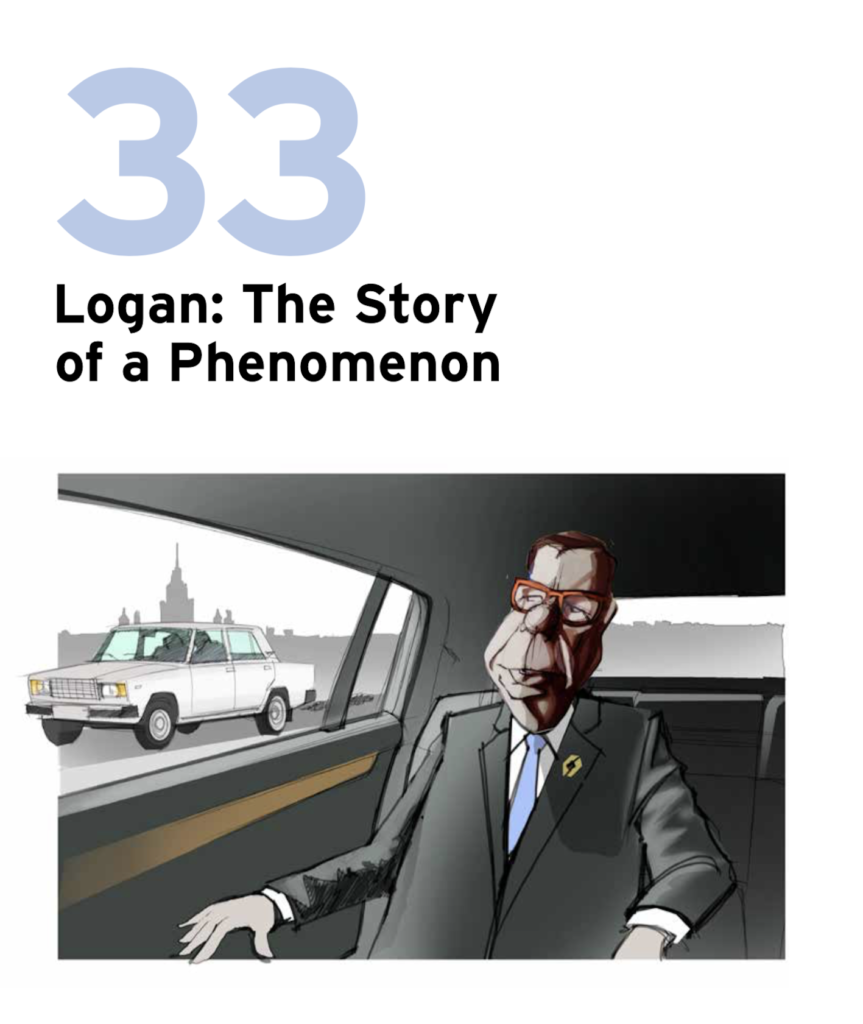 Louis Schweitzer : “Schweitzer didn’t have much real product experience. But he was already passionate about everything to do with design, and he later told me that his visits to the Renault Design Centre were his favourite moments during his term as president. His passion was so strong that every time we presented him with a beautiful 1:1 scale model, he always tried to get into the vehicle. What could be more natural ? Except that these hyperrealistic models never had doors that opened, and often the door handle remained in your hand ! Similarly, when he sat in one of our interior style models (an exact representation of the interior of a car, made of foam and clay), he could never resist the temptation to shift gears, despite our warnings not to move the lever. In most cases, corrective measures had to be taken in the workshop to restore the models to good condition, but no one was offended ! »

The illustrations are by Gernot Bracht.

This book is all the more interesting to read as it is based on 50 rather short and powerful chapters. Instructive, because it is not a throbbing biography, but the other side of a background that we know very little about. Below is the summary : 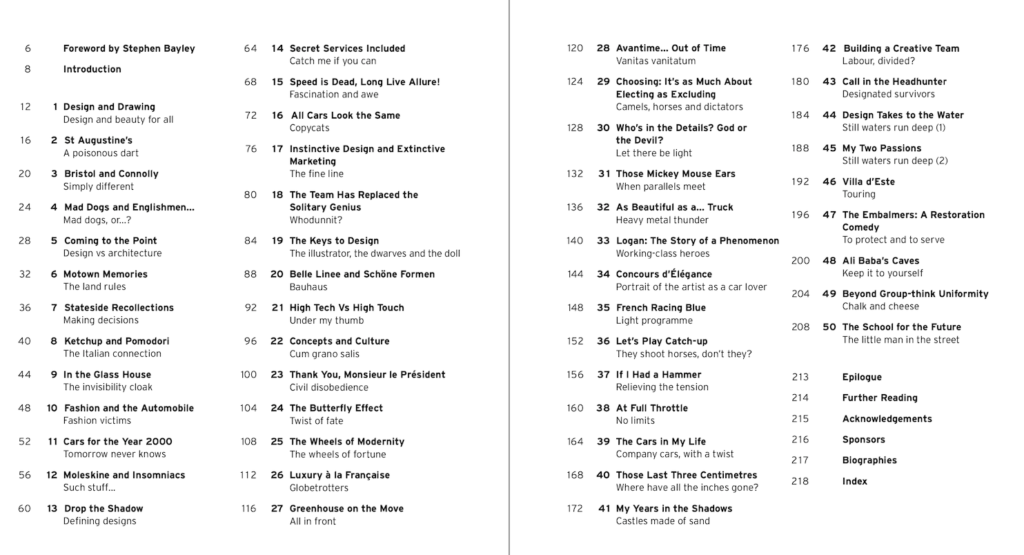