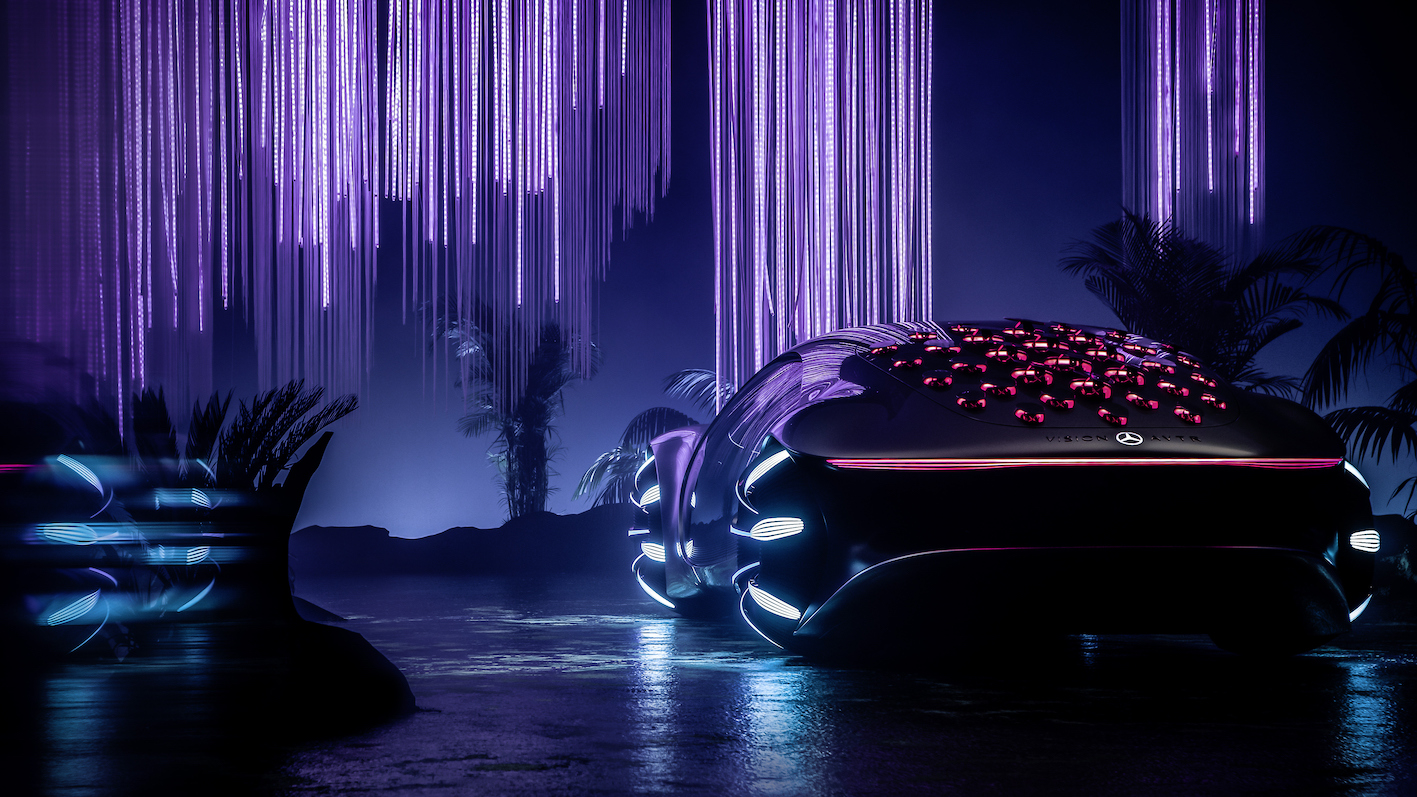 Mercedes VISION AVTR for Advanced Vehicle Transformation. This futuristic concept car was designed in partnership withAVATAR, one of the most innovative brands in the entertainment industry.

Inspired by the world of Pandora, this new Mercedes creation reveals a new interaction between man, machine and nature. Nice speech… Where we think back to the Citroën Activa II, the Renault TreZor, the Renault Fiftie and other Colani creations. Explanations.

This prototype embodies the vision of Mercedes designers, engineers and trend researchers for the mobility of the very distant future. Its design is a fusion of interior and exterior.

The structure where the inter/exter design blends together has been designed with inspiration from several of the creatures from the film. With its stretched “One Bow” design and formal language, the Mercedes VISION AVTR reinterprets the organic bio design dear to Luigi Colani who died last September.

On board, instead of the traditional steering wheel, the multi-functional control element in the centre console allows man and machine to merge. Hot on the front! By placing your hand on the control element, the interior comes to life and the vehicle recognises the driver by his or her heartbeat and breathing. So don’t sit in the car after your jog, the car won’t start.

You take your place in an environment of immersive experiences: by simply raising your hand, a menu selection is projected onto your palm and Irma could almost read your lifeline?

You can then intuitively choose different features. For example, real-time 3D graphics can be used to explore the fictional world of Pandora from different perspectives. The curved display module creates the visual link between passengers and the outside world.

The VISION AVTR concept uses a revolutionary battery technology based on organic cell chemistry, graphene-based, totally free of rare earths and metals. Greta is the one who will be happy! The battery materials are compostable and therefore fully recyclable. In this way, electric mobility becomes independent of fossil resources. In this way Mercedes underlines the great importance of a future circular economy in the raw materials sector. Come on, let’s get started before Australia burns down!

The 33 “bionic flaps” at the rear of the vehicle are reminiscent of the scales of a reptile. And incidentally, the scales of Renault’s TreZor concept car, dating from 2016. They can move in natural and subtle movements.

Thanks to the possibility of driving the front and rear axles in the same direction or in the opposite direction, the AVTR VISION device can move sideways by about 30 degrees. There is a bit of the Citroën Activa II in it. The latter dates from 1988. The so-called “crab movement” gives the concept vehicle an animal appearance even in its movement.

The seats of the VISION AVTR are made of Dinamica® vegan leather, the first and only microfiber that guarantees environmental sustainability throughout the production cycle. The floor is decorated in… rattan, reminiscent of Renault’s Fiftie, born in 1995…

Gorden Wagener (above), Mercedes-Benz design big boiss, explains that “we focused on organic materials and functions that are reminiscent of organisms. The transparent doors, for example, open upwards. Together with the flaps at the rear of the vehicle, they make the showcar appear in a lighter light. The interior acts as a nest or cocoon that protects the passengers. Only organic or vegan materials are used here. The center console symbolizes the Tree of Souls, the most sacred place of the Na’vi. It extends dramatically to the A-pillar and creates its roof structure, which gently encloses the passengers in the rear seat like a cocoon. The rear seat headrest is stretched so far forward that it becomes the front seat headrest. Everything is connected to everything. »

Mercedes has already sketched the contours of such strange machines, without deriving a concept car from them (above). This is now done.