When Gilles Vidal left Peugeot for Renault (more than two years ago…) we asked him if it was the mid-life crisis that had pushed him to take this decision. The Renault emblem not yet dry on his suit jacket, he answered us that it was not, “because going to another brand where you will discover a new identity, a new philosophy, a new DNA and then inventing the next step, at a time when Renault is changing paradigm, is very interesting.

Two years have passed since these words were spoken. After the concept car of the next Renault 5 electric car, which has swapped the Andalusian orange of the original for a sparkling yellow, after the future Renault Scénic (Scénic Vision concept above), which dips its body in black ink and its interior in ivory white, “the time has come for laughter and song” could be sung by the orange Casimir. Because with the 4Ever Trophy concept, “it’s springtime every day”.

It is a pity that it is dressed in a grey colour that is far removed from the R4 Safari of 1975, the Jogging of 1981, or even simply the orange of a 1968 R4 (below) with its new radiator grille which inspired that of the concept car. Because, yes, the 4Ever Trophy concept car announces the future electric R4 which will be marketed in 2025, one year after the R5.

To convince us, Gilles Vidal explains that you have to keep in mind all the parts of the body in light grey, erase the huge sole of the Trophy concept, and you have in front of your eyes the production R4 which will come to support its thermal cousin Captur on the market. And the R5 will do the same with the Clio thermal, while eventually replacing the Zoe.

“What is interesting about the Renault 4”, says Gilles Vidal, “is that it is a fairly universal car, with 8 million units sold (8,135,424 units of saloon cars and vans up to 1992), it was marketed in a hundred or so countries, but it was present everywhere in the world, without exception. It has accompanied all cultures in all countries, it has transported bales of hay to the most remote farms and countryside, but it has also transported families, it has also been used for fashion photos with famous actresses for Vogue or Elle magazines.” Below.

“Originally, it was a simple, all-purpose and fairly adventurous machine. It was finally a design object in terms of functionality. In terms of aesthetics, the 4Ever project is of course more complicated than that of the R5, whose silhouette is adorable and immediately appropriable. But it’s good for a team of designers, it’s a great challenge!

“We worked in the same way as for the R5 and we asked ourselves what we could activate as elements of recognition, so that even young people would be attracted without knowing the original model. These codes are expressed in the oblong capsule that integrates the headlights and the logo, with a movement under the eyes. The round headlights of the 1960s R4 are truncated to give a more assertive look.

“Another important code is the third fixed side window, located just above the rear wheel, a graphic element typical of the R4, as well as its vertical rear lights. Obviously, their treatment is different with the care taken with the shapes, the sheet metal that is flush with them and gives a very high-tech side to the execution of the shapes.

“The Renault 4 had protections designed with tubes formed at the ends of the bumpers. We have redesigned them as elements integrated into the bumper which have nothing to do with their ancestors in terms of their shape, but which have the same function. And we didn’t sacrifice functionality for aesthetics. We’ve designed it so that you can fall in love with it at first sight while retaining the R4’s features and functions. You will see on the production model that we have worked hard on the boot entrance, which is not yet visible on this Trophy concept.

“On board, we have worked on the volume and habitability without forgetting the modularity and accessibility which are important elements in this R4 project. We’re going to try to be creative in the details to bring care to all areas of the car, including exterior areas that are often neglected, such as the fender protections, which are of course exaggerated on the Trophy concept.

“Reactivating the elements of recognition: the explanation by the photo.

In a few words and photos, here is how the design team reinterpreted the DNA codes of the Renault 4 of the 1960s for the future R4 of 2025. Below, you can clearly see this line coming from the side of the car and plunging from the wing onto the bumper. This curve is directly borrowed from the original car.

The choice of the reference grille was the 1968 model year grille (below), which appeared in September 1967 on the R4. The designers tried to introduce round headlights for 2025, but the balance was not there. The headlights were therefore truncated and are obviously much more technological (!) while a wavy movement was added on the lower line of the grille to give more dynamism.

The 1961 R4 was characterised by its third side window, triangular in shape and located just above the rear wheel. This principle was copied by the 2025 R4. The light ring will obviously not be retained on the production model.

The line that runs around the perimeter of the R4 (below) has been masterfully reinterpreted for the 2025 model. The boot has not yet been defined on the concept, but its opening and interior modularity have been refined to improve the performance expected of this future all-purpose crossover.

The last distinctive element on the outside, the vertical lamp of the 1961 R4 with its three luminous studs, has been retained, again using the latest technology. The new lamp – whose design is close to that of the series – is installed in a very flush manner, with careful attention paid to the connecting curves.

Since the aim is to reactivate the recognition elements of the original Renault 4 in the future electric SUV of the “B” segment, we challenge Renault and the interior designers of the 4EVER of 2025 to implement “something” on board that is reminiscent of the iconic “4L” gear lever.

At the time, this detail was one of several that led the Citroën boss (Pierre Bercot) to sue Renault for plagiarism (see our article “This time, Citroën will not sue Renault” on this site). So what do you do with a gearshift lever when there is no gearbox left? You have (almost) three years to figure it out.

But as LIGNES/auto is nice, here are our own ideas to transform this lever into : 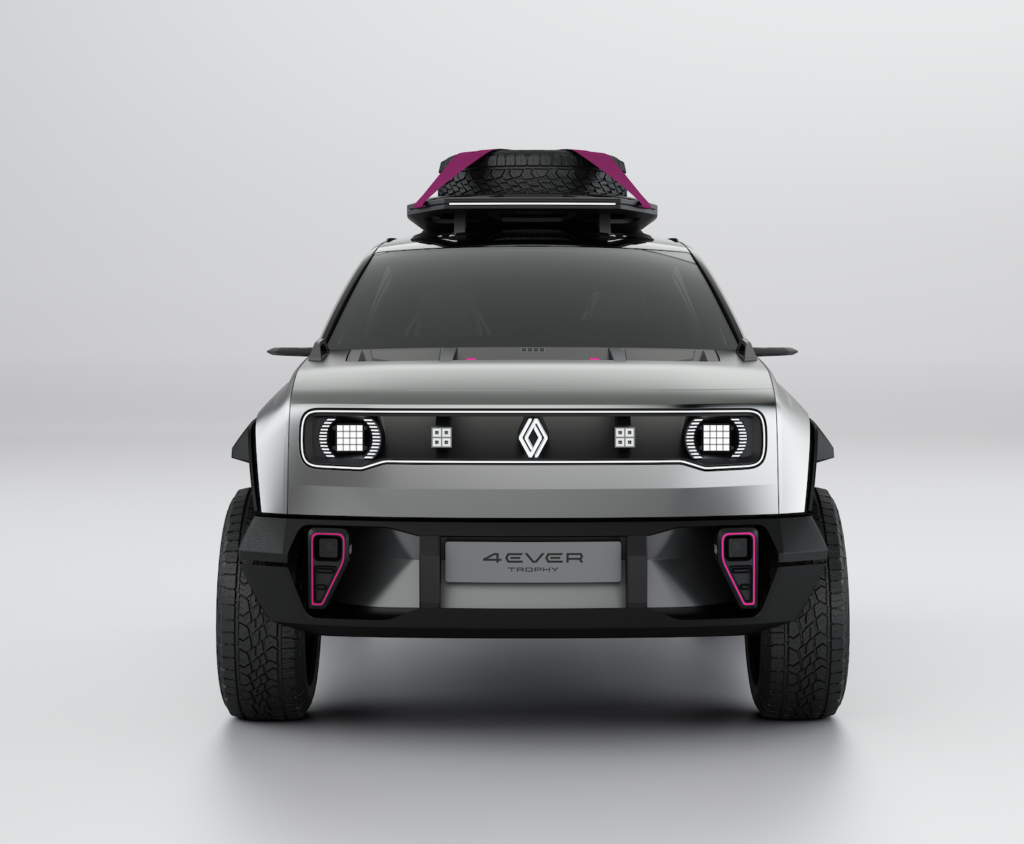