We were a little intrigued, not to write anything else, with the restyling of the Series 7 below. When we discovered its nostrils – for which Kleenex will have to expand its factories – we thought about the genealogy of the “nostrils” in BMW’s history.

We invite you to play ear, nose and throat specialists and dive into the famous nostrils of BMWs through the ages. Especially since with the new Series 4 Concept unveiled in Frankfurt, a new orientation of the theme seems to have been born…

This time, the BMW’s soft-nose, very horizontal, is no longer weighed down by two gigantic nostrils deployed over almost the entire width, but it follows the very vertical movement of these new nostrils (on the 4 Concept Series) and is treated in vertical lines in its turn. If not more elegant, it is more coherent….

But this future identity is based on decades of evolution, often light, sometimes imposing! Below, BMW even dares to explain by the drawing inspired by the Garmisch concept car, designed by Marcello Gandini for Bertone in 1970, to give birth to the bow of its new 4 Series.

The success of a car manufacturer depends first and foremost on brand recognition through a strong identity. An identity that is mainly displayed on the bow of the vehicle, whether its optics or, more often, its grille. BMW produced its first cars by acquiring the Dixi brand in 1928. Then the first BMW 3/15 PS was born in 1929, ten years after André Citroën launched his own brand….

If the first BMW does not yet have its famous characteristic double “bean” grille, these famous nostrils appeared very quickly, from the early 1930s, especially on the BMW 600 IHLE (below)

But it is of course the BMW 328 roadster (below) that will leave its mark when it appeared in 1936, embarking the brand on a sporting destiny from which it will never deviate. This roadster proudly displays the grille, which becomes the strong identity of the brand’s youngest and most recognizable brand.

From then on, all BMW’s achievements will adopt this signature with, at first, vertical oval shapes, sometimes supported by other air inlets as on the 1951 BMW 500 series (below) which, with its slightly waded lines, nonetheless reinforces the famous brand identity…

In 1955, while in France Citroën unveiled its real “DS” bomb, BMW also remained very active with the appearance of the 507 icon, a convertible designed by Albrecht von Goertz. A splendid realization (below), very fine and balanced, intended for the American market and which will finally be ignored by this continent since less than 40 units will be sold there on a total production of 251 copies. This commercial failure is not a failure in terms of the brand’s identity, which, under von Goertz’s charcoal, paved the way for a new interpretation of the famous BMW grille : it stretches, extends and breathes in the bitumen through its two nostrils piercing the entire front face of the roadster…

1955… It is also the year in which BMW produces the Isetta BMW (below) with a concept totally opposite to that of the 507. Surprisingly, with this proposal unveiled at the same time as the 507, we are dealing with a range based on two models that are far apart, just like the Citroën range of the time with its 2 HP and the DS ! The isetta at least has the merit of breaking the codes since it has no grille !

It will not be the only BMW to be marketed without a grille, since the 700 series (below), which will be launched in 1959, adopts the same architecture as the BMW 600 derived from the Isetta, with an engine positioned at the rear.

But with this 700, it is above all the arrival of the designer Giovanni Michelotti in the BMW sphere that must be taken into account because with him, the dying German firm, almost sold to Daimler-Benz, will be saved in the end by the 1500 project. This middle-class sedan will be given birth by the Italian designer, who is nevertheless a fan of sports car designs. It will lay the foundations for a BMW style whose parent company will strive to perpetuate. The 1500 sedan called “Neue klass” (below) will be a success and will take the German brand out of its very turbulent zone.

In the mid-1960s, Michelotti embarked on a project for a sedan slightly more compact than the 1500, with only two doors, which would give rise to the 1600 series in 2002 and in particular the 2002 Turbo. The BMW design team is accompanying the Italian in this work with Wilhelm Hofmeister, who is responsible for the famous “comma” in the design of the side window on the side of the body. This “Hofmeister-Knick” line (the elbow of the side window) will continue to this day. Like the grille, which could have abandoned its two central “beans” (below) to widen them in order to integrate the front headlight….

A principle that was partly retained on the 1600 but to which the designers finally added the characteristic BMW emblem (below) to the centre. Phew ! The beans are still there !

First, in 1972, there was the first concept car of the Bavarian firm : it was the BMW Turbo (below. Picture Ch.Martin) designed by the French Paul Bracq. After ten years at Mercedes from 1957 to 1967 and a stint in France, he is back in Germany with Daimler-Benz’s competitor ! And not with just any product : a milestone in the history of automotive design and in the history of brand design.

Paul Bracq then set out to preserve the BMW grille’s strong identity by making it evolve significantly. It will thus introduce the negative inclination of the grille with this characteristic nose that will be adopted by the Series 3, Series 5, Series 6 and Series 7.

Much later, when the 7 Series is offered with a V12 engine, stylists keep the architecture of the typical BMW grille without being ostentatious or vulgar. Above, the first 7 Series V12 engine has wide nostrils, certainly, but this is nothing compared to what will follow… Here is the 2019 Series 7 (below) that has been unveiled in China. Where you startle when you discover the nostrils that have tripled in volume compared to the first “7” V12 above !

This new language of BMW identity took root long before this new 7 Series. The 2000s will see an evolution in the design of the BMW grille, which some consider dramatic today and others applaud, explaining that it is in tune with the times…

The 2000s began with the presentation of the first SAV (Sport Active Vehicle) in the German automaker world: the BMW X5 paved the way not for a new vehicle, but for a real revolution that would lead all automakers in the world to create a real range in their range of what are now called SUVs.

From generations of X5 (above that of 2018) to generations of X1, X2, X3, X4, X6, X7, the very famous double bean has turned into a magic bean, taking over the years proportions worthy of heavy truck calendars ! BMW’s identity, which was based on the subtle combination of the two “beans” framed by two calenders integrating the optics, has changed considerably and now only relies on the two nostrils. They are now different depending on whether they are used on an SUV, a sedan or an electric vehicle.

Thus, the nostrils of the X7 (above) alone represent more than 60 % of the frontal surface while the optics, on the other hand, have considerably reduced their sail area !

For the SUVs in the “BMW i” range, (above and below the BMW iNEXT) the two beans are interconnected and not totally separate as on the rest of the range. They stretch over almost the entire bow and no longer hide any air intake since they no longer have an internal combustion engine to cool but collect all the sensors or lasers introduced on autonomous vehicles. They lost their original function, found a brand new one and pushed the identity of the brand born in the early 1930s to its peak.

In short, the identity of the BMW’s bow has constantly evolved since the 1930s while still retaining the famous “double-haricot”. The two small calender that completed this front view have disappeared, replaced by a gargantuan growth of these famous nostrils.

In conclusion, I would have loved it if BMW had been more inspired by the Pininfarina concept car unveiled in 2013, the Gran Lusso Coupe (below), which reinterpreted the brand’s legendary grille with talent, elegance and without harmful exaggeration, while resting on extraordinarily sharp proportions. A real BMW, what…. 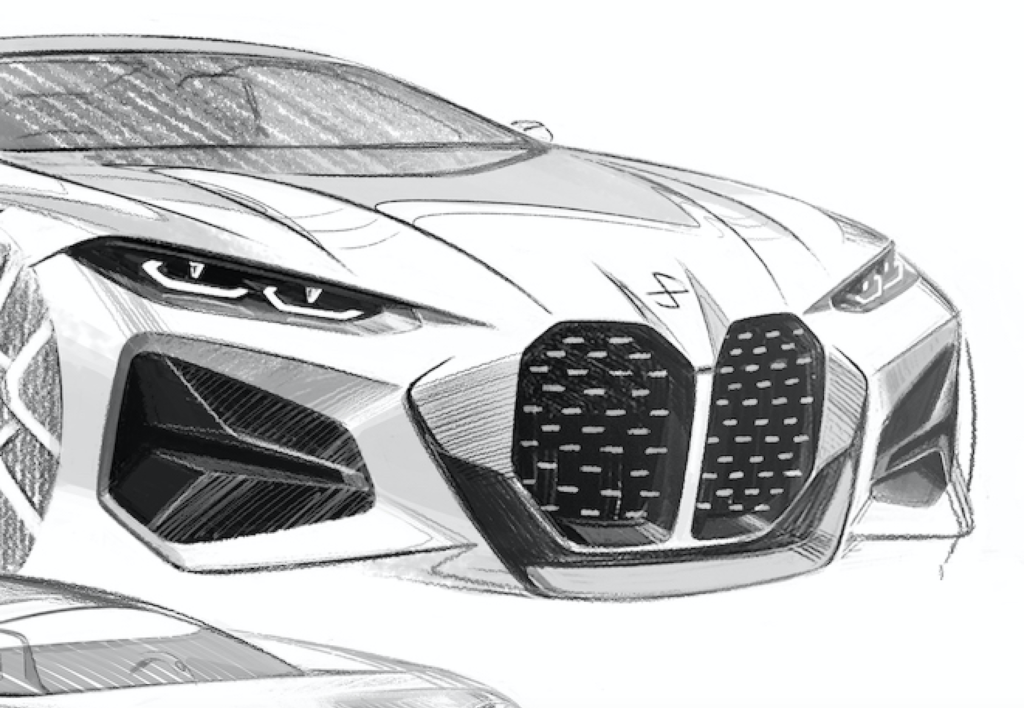