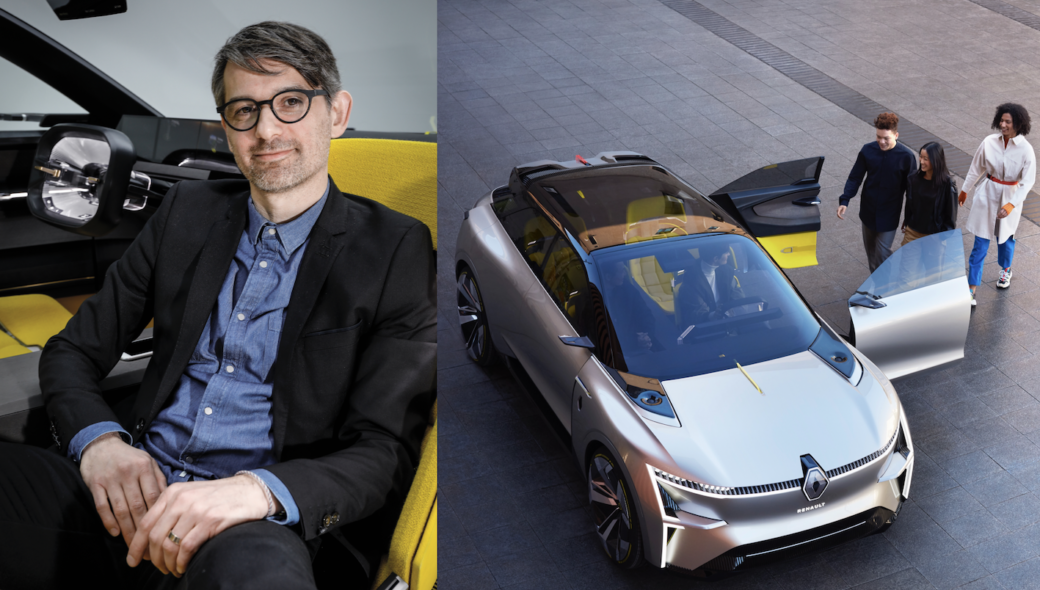 We met with François Leboine, head of design for the concept car unit, a few days before the announcement of the cancellation of the Geneva Motor Show where Morphoz was to be unveiled. Let’s discover with him this concept which has a certain length !

Morphoz is a 4.40 m compact sedan with a range of 400 kilometres (it is a 100% electric vehicle based on the Alliance’s new CMF/EV platform). Its particularity is that it is 20 cm longer at the front and 20 cm longer at the rear. At the front, it can receive an additional battery pack by passing over a dedicated station. Its range then climbs to 700 km and its length to 4.80 m. Surprising concept !

LIGNES/auto: You used to work for series production cars and now you’re at the helm of Renault’s concept car design. Another job ?
François Leboine : “No, it’s still the same job, that of creating the most beautiful concepts possible that tell the most interesting stories possible. What changes with the series is the purity of the design, which we push to the end because we escape the constraints and industrial compromises. It’s all the pleasure of the concept, of a story that we tell with a design that is not in the compromise because the concept car is anything but a compromise !”

Morphoz is the fourth petal of the second daisy wanted by Laurens van den Acker, the boss of Renault design (below). The result is less cold than the 3 EZ concepts (EZ-Go, EZ-Pro and EZ-Ultimo) ?
F.L. : “This petal is not like the EZ family petal with its notions of service, but it is based on a reasoned approach to the automobile, where in the end you ask yourself the question of need, what is necessary and the ability to adapt.”

What was the initial brief for this Z36 project ?
F.L. : “We started with the idea of exploring the family with a vehicle that is in the animal kingdom, with a great capacity to adapt to our uses, all in an environment that evolves. This concept is ultimately consistent with a future where it has to adapt to our environment.”

“The initial idea comes from a reflection on usage, the contemporary family and how to manage the variable geometry of these new families. So we made the car that goes with it, to… variable geometry.”

What was the most complex work in terms of the drawing that we owe to Marco Brunori ?
F.L. : “The most complicated point was of course the enlargement of the car, because people had to find it as beautifully compact as it was long.”

It’s finally a sedan and it’s not a MPV ! For the creator of the compact MPV, that’s astonishing. What’s happened ?
F.L. : “Oh, nothing happened at all ! We’ve come into line with the desires of our time. We don’t write the same stories with the same answers and the same objects. Here, it’s interesting to play with the enlargement of the car – and therefore of its passenger compartment – but also with a technical area which is growing with the vocation to go further…”

Finally, we’re back to auto codes with this long hood !
F.L. : “This car gets bigger and then we can play with the car codes. For example, the long bonnet in the Travel version no longer expresses power, but the possibility of going further thanks to its additional battery. This is true modernity.”

This sedan reminds me of the 2017 Symbioz concept car. Do they have anything in common ?
F.L. : “Their universes are parallel and coherent. We weren’t going to conceive the opposite of SymbioZ three years later ! The evolutions are in line with the interior sharing to better encourage passengers to communicate. The habitat fits into our interiors and MorphoZ could very well enter the connected home designed at the time of SymbioZ.”

What is the difference between these two concept cars ?
F.L. : “Since SymbioZ, we have moved into a world where the automobile is part of a new ecosystem. It’s integrated into a more global universe and it fits into urban spaces as well as the idea of long journeys, thanks to a platform that transforms and evolves specifically according to our needs. Beyond this car, we are thinking about other ways of sharing it than between the occupants. For example, the battery pack exchange station evokes, of course, the sharing of energy, but tomorrow it will also be able to redistribute this energy to light a street, recharge an electric bicycle station, and so on. This energy storage platform will be connected with our environment and our infrastructures. »

The proportions change between the short and long versions. How did you determine the lengths of the two silhouettes in one ?
F.L. : “In our thinking, we wanted to manage the enlargement to evolve from one segment to the other, grow by about 40 centimeters. We switched to other codes to impose this story around the car’s ability to adapt for different distances and uses.”

In terms of design identity, what was the brief ?
F.L. : “We wanted to evolve naturally with a design made up of sensual volumes on which precise, extremely sharp surfaces are applied to give concrete expression to the car’s technicality. The details tell the story of the electrification era. This is the 2.0 generation of electric cars at Renault. Everywhere in the transition zones, we’ve played with vibrating lines, a sort of kinetic vibration that amplifies the car’s translation and adaptation effect.”

Interview by Christophe Bonnaud.
The author is publishing a 356-page book on the history of Renault styling at Editions BJB: “Concept-cars and Renault design prototypes” (below) due out in early April. You can still pre-order it at a preferential price on this site : http://lignesauto.fr/?p=15225 Many unpublished documents and aborted projects (notably Alpine) are revealed in this book, the second volume of the collection after the one dedicated to Citroën (still available here : https://www.bjbeditions.com/products/concept-cars-et-prototypes-detudes-citroen)

François Leboine’s career path can be read below