Porsche will unveil its Taycan, the brand’s first 100 % electric model, at the Frankfurt Motor Show. Here it is already revealed with photos that show the extreme similarity of style between it and the Mission E concept car presented in 2015.

We propose here to compare the style of the two protagonists. In automotive history, the last production vehicle to have borrowed practically the style of a concept car is the Renault Avantime, below, designed by Thierry Métroz, then at Renault (now in charge of DS design)

Before talking about design, here is a summary of the features of the new 100% electric Porsche: Turbo and Turbo S

Make way for style ! On our visuals, the Mission E concept car is always in the upper part, the Taycan being underneath… It should be noted once again that Mission E was unveiled four years ago and that, despite its gestation period, the Taycan looks extremely modern while maintaining the aesthetic codes of the Porsche.

1- Contrary to the concept, the Taycan’s hood is hollow in its center and slightly curved at its ends.
2- the wings of the production car are much less prominent than those of the concept car.
3- the very particular look of the concept is practically preserved as it stands and nestles in the front air intake.
4- the air inlet required for cooling electric motors is much larger in series.
5- Mirrors have been installed instead of rear-view cameras.
6- Like their front counterparts, the rear wings are less muscular than on the Mission E concept

The rear view reveals the similarity of style between the two models. It is the first Porsche of all time not to be equipped with… exhaust outlets ! And for good reason !

1- the underbody panels are much less sculpted and the air outlet is almost vertical.
2- the hard point of the pavilion is located higher up to promote habitability.
3- the transition to the series gives slightly less dynamic shapes of the glazing and the roof drop than on the concept.
4- the wide rear window is blackened in its lower part but the light band is still present !
5- the shield is obviously cut to make way for the tailgate.
6- the extremely large diffuser has been kept almost as it was. It’s a new signature of the electric Porsche style.

The elevation view reveals the constraints of the standards (safety, habitability, etc.) that have imposed quite a few modifications but the designers of Michael Mauer’s team (http://lignesauto.fr/?p=12959) have perfectly integrated them without modifying too much the incredible design of Mission E ! Obviously, the opposing doors of the concept were not retained.

On board, the designers respected both the brand’s DNA with a horizontal dashboard as was the case with the first 911s, while maintaining the dynamics of the exercise as seen on the Mission E concept. We find in particular the instrumentation block in sensual curves while the chronometer is still present ! 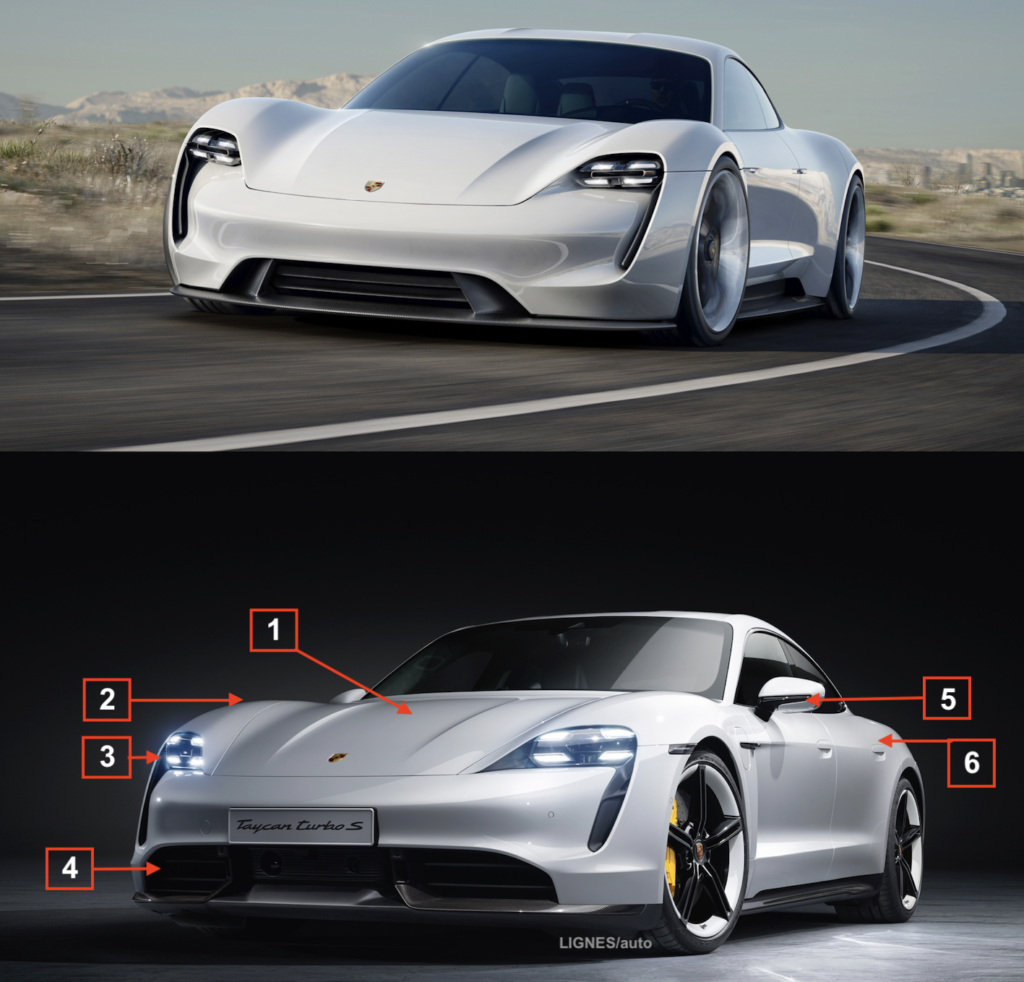